Ever wished that Lilac season lasted a little longer or wanted to capture the scent of your garden and just bottle it? This is a dream you can make true as long as you have access to an ample supply of fresh flowers, and a few everyday tools and materials that are readily accessible.

Enfleurage is a labour-intense art form, in which the scent exhaled by living flowers is captured and preserved. It is one of the most rewarding projects, that once you understand the principles of, you could set off on your own to extract from many fragrant flowers, and truly connects you to the earth, the seasons and the beautiful world of scent.

An Enfleurage Mini-Course is offered this spring via Zoom, and includes three one-hour sessions in which we'll learn the principles of preparing traditional yet vegan enfleurage, extraction and also two less known methods of capturing flowers beauty for years to come.

Students receive a written Enfleurage Primer with all the materials and equipment necessary for this process, as well as a list of recommended botanicals, and access to the 3 enfleurage live Zoom classes and their recording, which will demonstrate each step of the process. Ever wanted to be a fly on the wall in a perfumer's lab? This is the next best thing! Get a whiff of what's brewing in Ayala Moriel Parfums studio each season, which is not only perfume! I also create incense, soaps and natural cosmetics from the best ingredients on the planet, fragrant teas and even chocolates!

If you follow my feeds (on Instagram and Facebook), you probably already noticed that I just love plants and love growing, harvesting and handcrafting beautiful things from them. Some are fragrant, such as incense, enfleurage, and hysrosols, but are not exactly feasible to produce in large amounts as they are so precious and time-consuming to extract, and are truly too precious to offer regularly in my selection at the online boutique. At the same time, what's the point of making them if I can't share them with you? 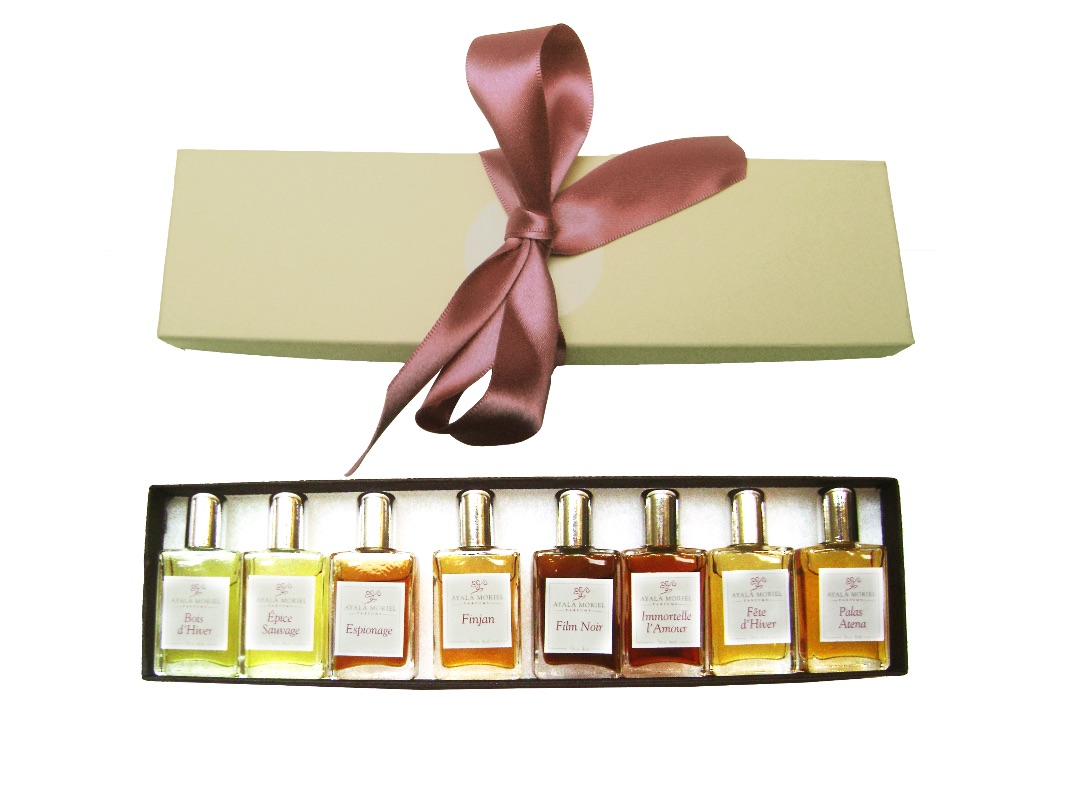 And so I've decided to leverage my various interests and experimentations with anything plant-related, to bring to you one-of-a-kind packaging for these seasonal delights. These are bundles of joy and delight, each a surprise that is carefully curated each season, and although all are made by one pair of hands, I believe they will be just as versatile and surprising as any subscription box you could dream of. 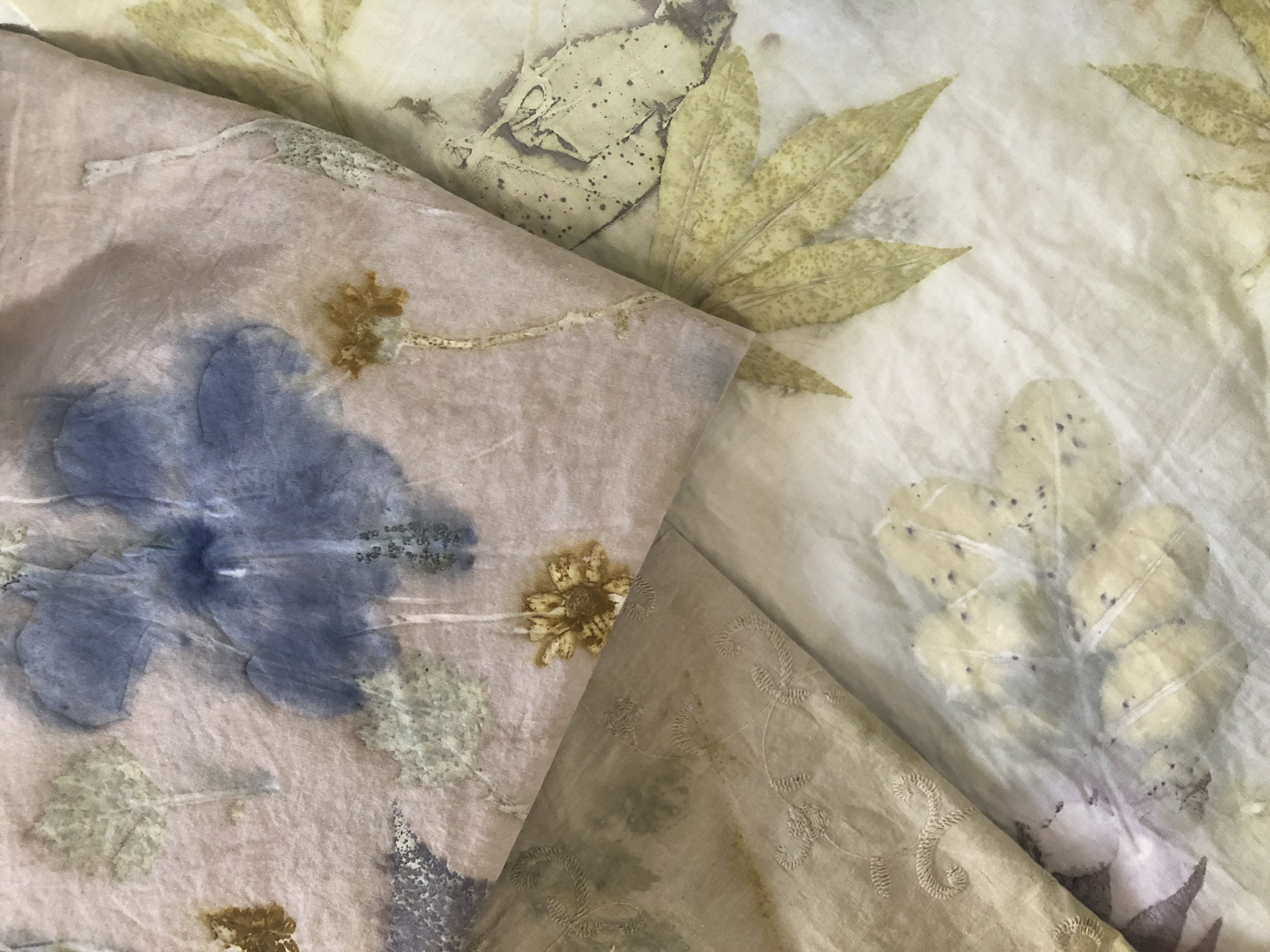 Therefore, you won't be getting boxes per-se, but rather, packaging that is handmade, beautiful, sustainable and reusable - Furoshiki from up cycled fabrics, locally made botanical Japanese-style paper (a collaboration with a local artisan), and last but not least - eco-printed natural fabrics and baskets that I weave from wild and local plants I harvest and forage around my beautiful studio in Clil, in the Western Galilee of Israel.
The Summer Subscription box is schedule to be ready to travel to you in June, so that you have it in time to celebrate the Summer Solstice. The following seasonal mailouts are planned to coincide with the Autumnal Equinox, Winter Solstice and Vernal Equinox in the spring. 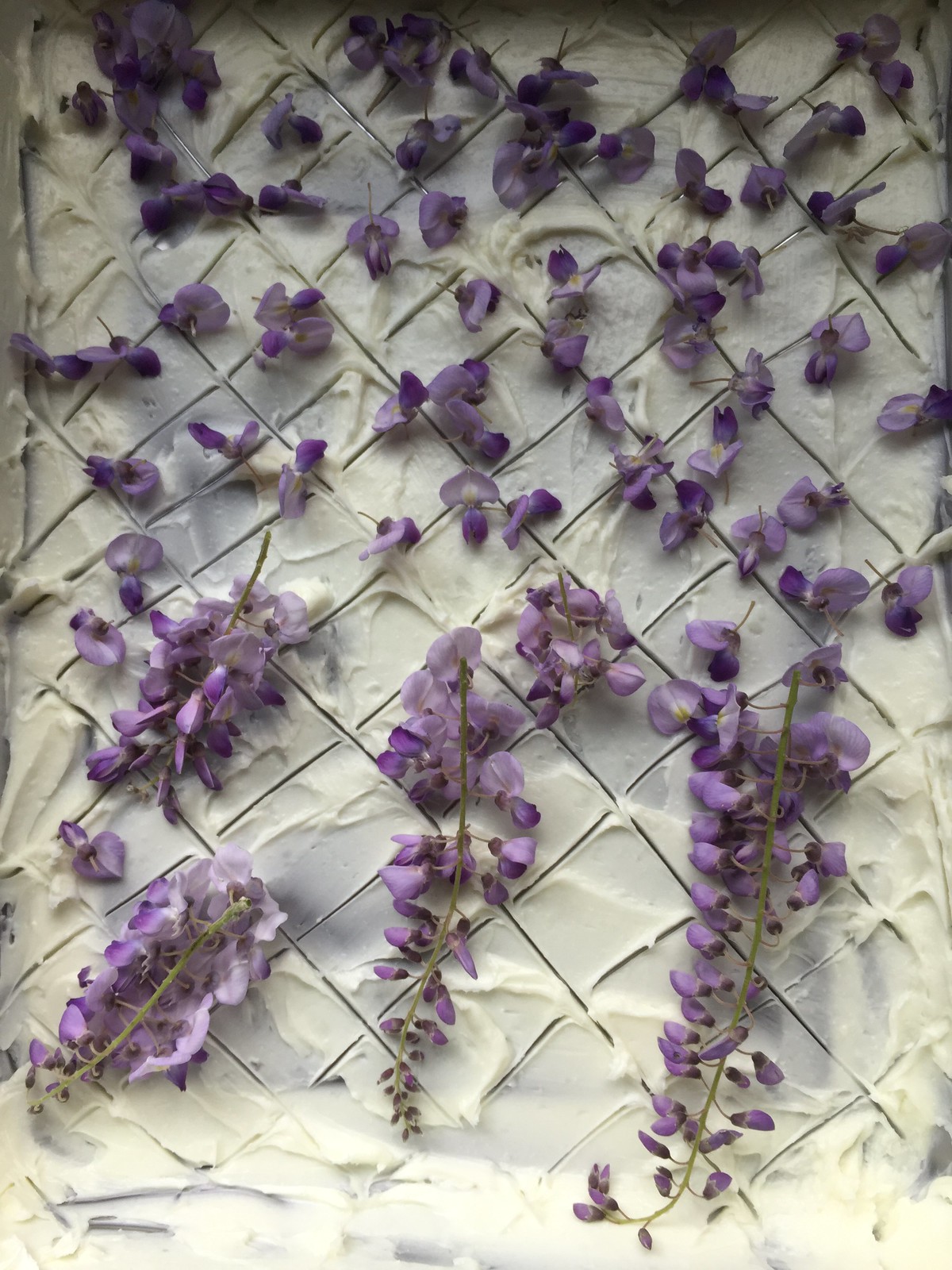 Wisteria is one of my favourite plants. In all season, it has grace and character. The delicate, fragrant and decorative racemes of purple flowers in the spring against the grey branches, followed by copious green and shade-giving foliage it the summertime, changing leaves in the autumn, and even in the winter, when it's dormant, it manages to keep its beauty with the sparse grey branches and trunk that curl around whatever it's climbing on. 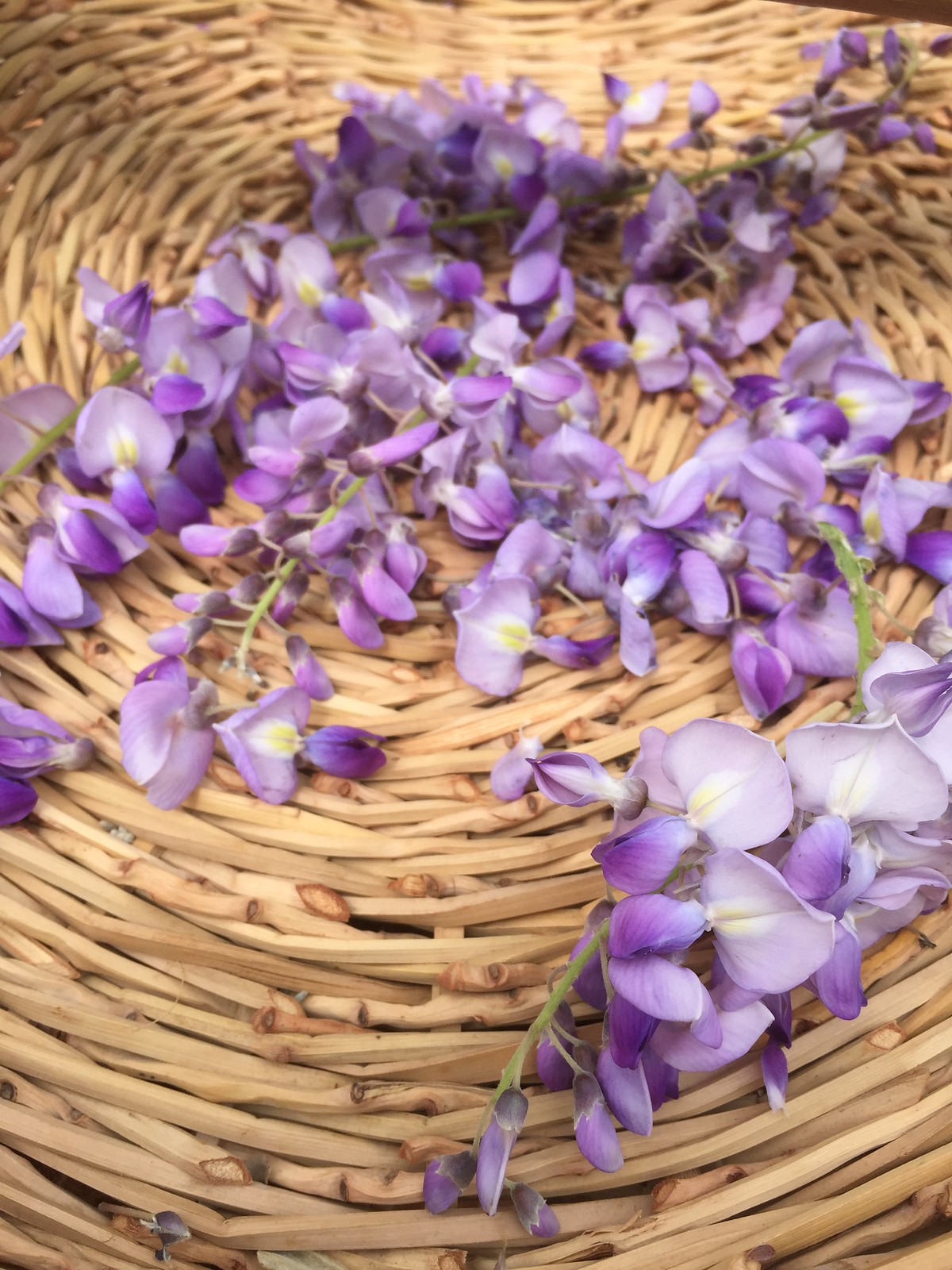 I planted my wisteria in the summer, to give shade to my eastern window, which is bringing in too much heat in the summer months into the Pilates studio (and there are plenty of those where I am now). In the winter, when it's barren, it will allow the gentle winter sunrays to get through the east window and bring light and warmth to the room. 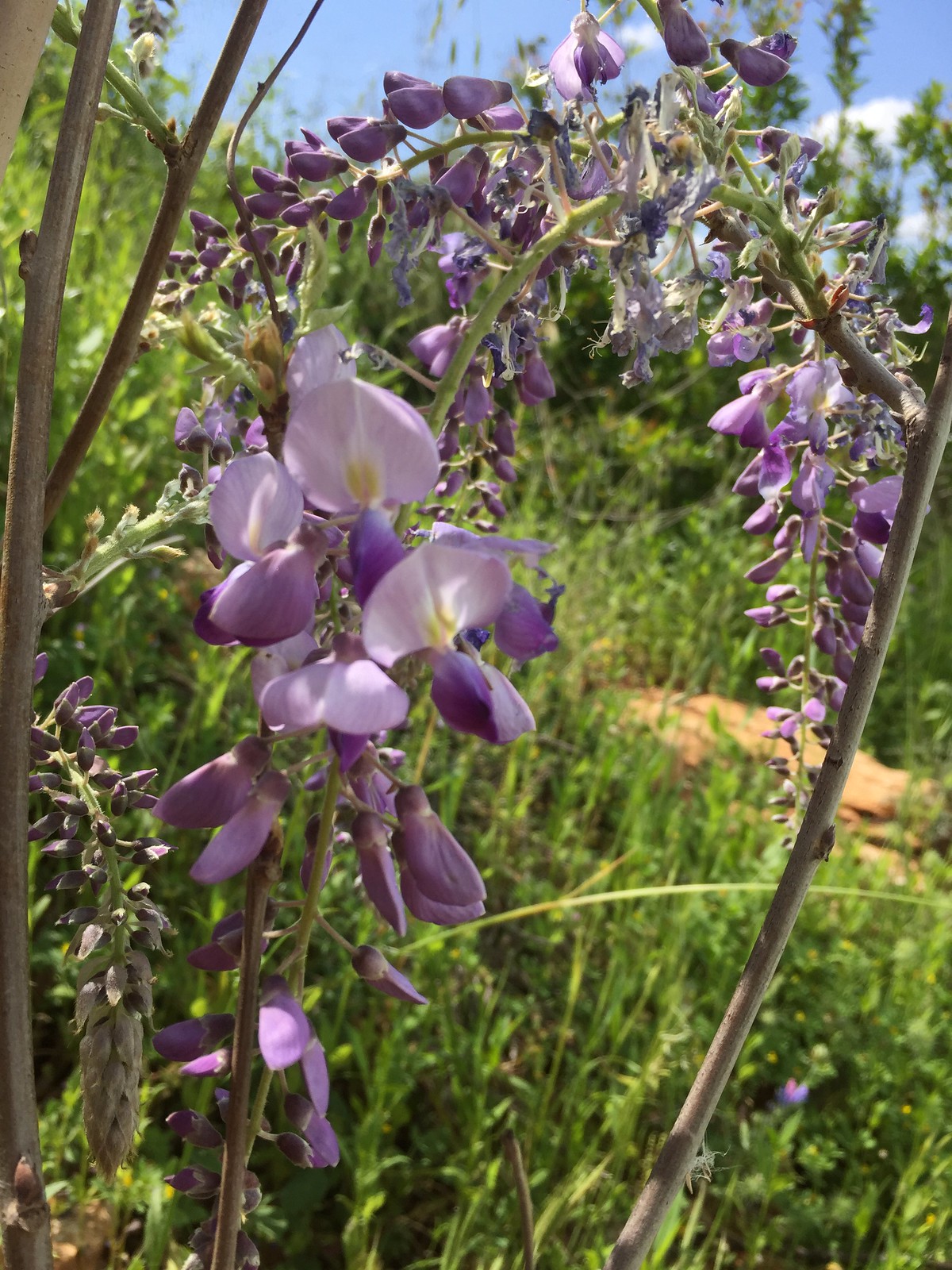 I was thrilled when the first clusters of buds started showing - but soon enough, there were nasty black beetles with white dots, the same ones that munched away at my roses last year - literally feasting on this and wrecking havoc! To top that damage off, a couple of days of dry east wind, and most of the flowers were gone. I was able to set up about two recharges of enfleurage trays, and it looked promising, but then turned kinda sour and musty smelling. My only consolation is that next year there will be more. And also there is still an abundance of sweet pea flowers to enfleurage, as well as broom. So I will have lots fo sweet smells to play with very soon. Not all is lost! 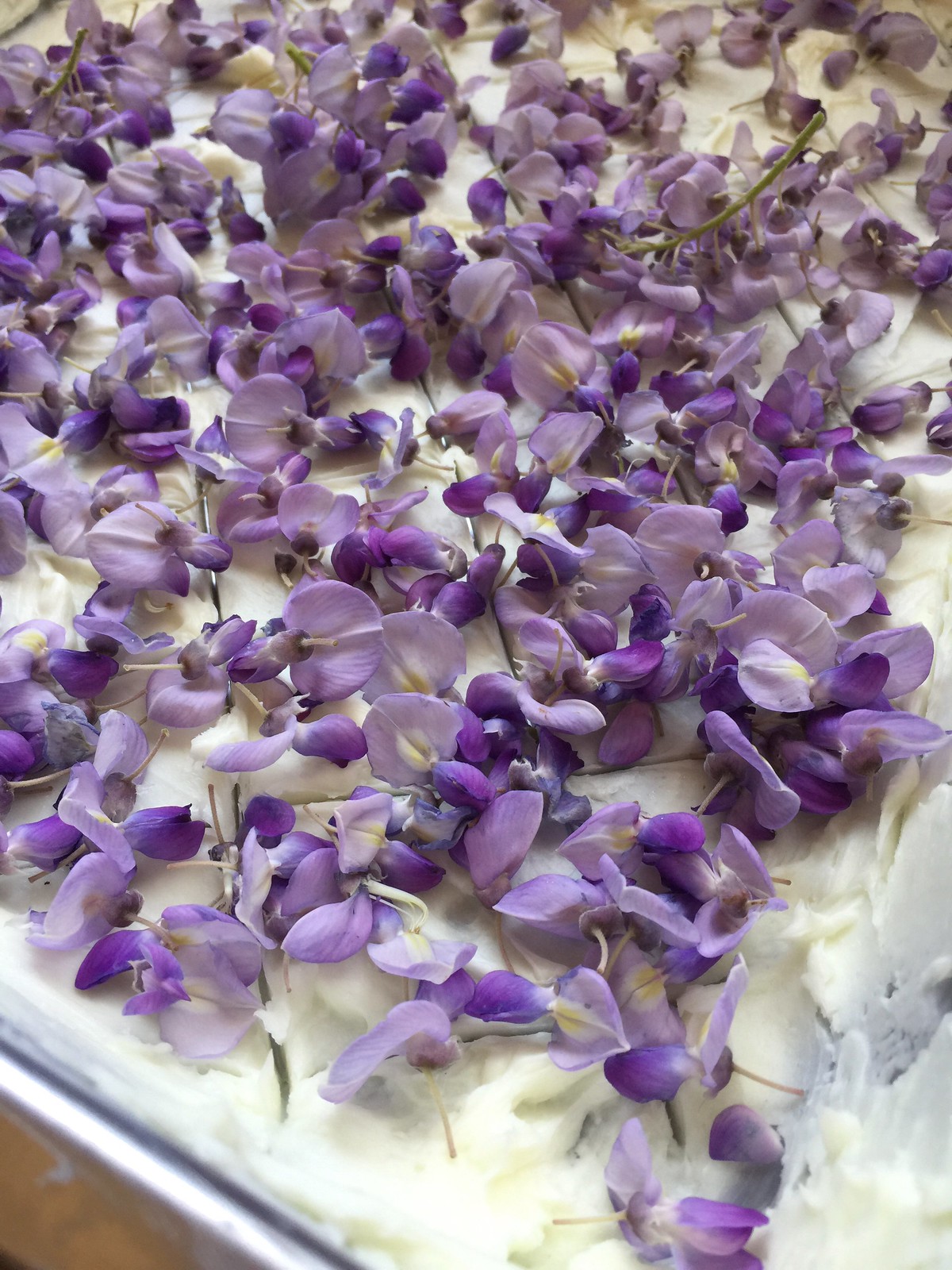 Wisteria (Wisteria sinensis) belongs to the Fabaceae/Leguminosae family, and has flowers like all the other legumes, resembling butterflies and often fragrant, and even edible.

Please note that wisteria contains a toxic glycoside in all parts to he plant - wisterin. It will causes all fun digestive nightmares, such as nausea, vomiting, diarrhea and stomach ache. So don't eat it and make sure children don't get tempted to taste it!

The flowers are often purple (though white varieties also exist), with a yellow and white "landing strip" for guiding the insects to the reproductive organs. 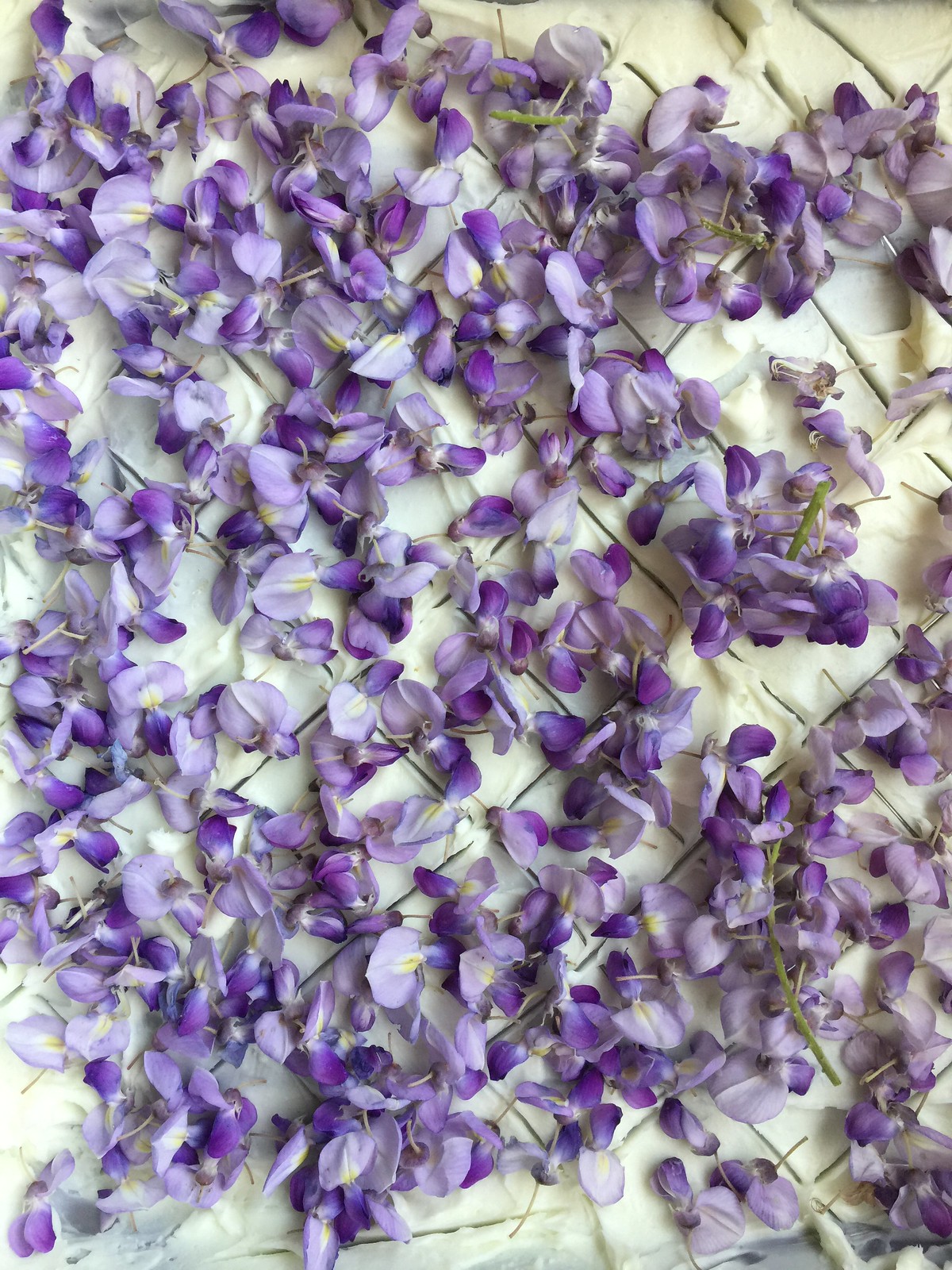 As for the scent itself, it is hard to describe, and in my opinion also not exactly as distinctive as, say, sweet pea. I find  the one growing this year at my garden it to be extremely similar to ylang ylang, with pronounced clove-like scent. It has a lovely creaminess, however I am lost for words describing exactly what is special about it. I remember the ones growing in Vancouver as having a soft-focus personality, more powdery yet also heady. I do not recall them being so clove-like at all. Bo Jensen describes the wisteria scent being "a pleasant, mild, warm and creamy sweetness with rosy, peppery and spicy nuances", and cites Joulain et al. research with the key molecules as being beta-chromenes 7-hydroxy-6-methoxy-4H-1-benzopyran and 6,7-dimethoxy-4H-1-benzopyran, as well as 3-hydroxy-4-phenyl-2-butanone or phenylacetoin. 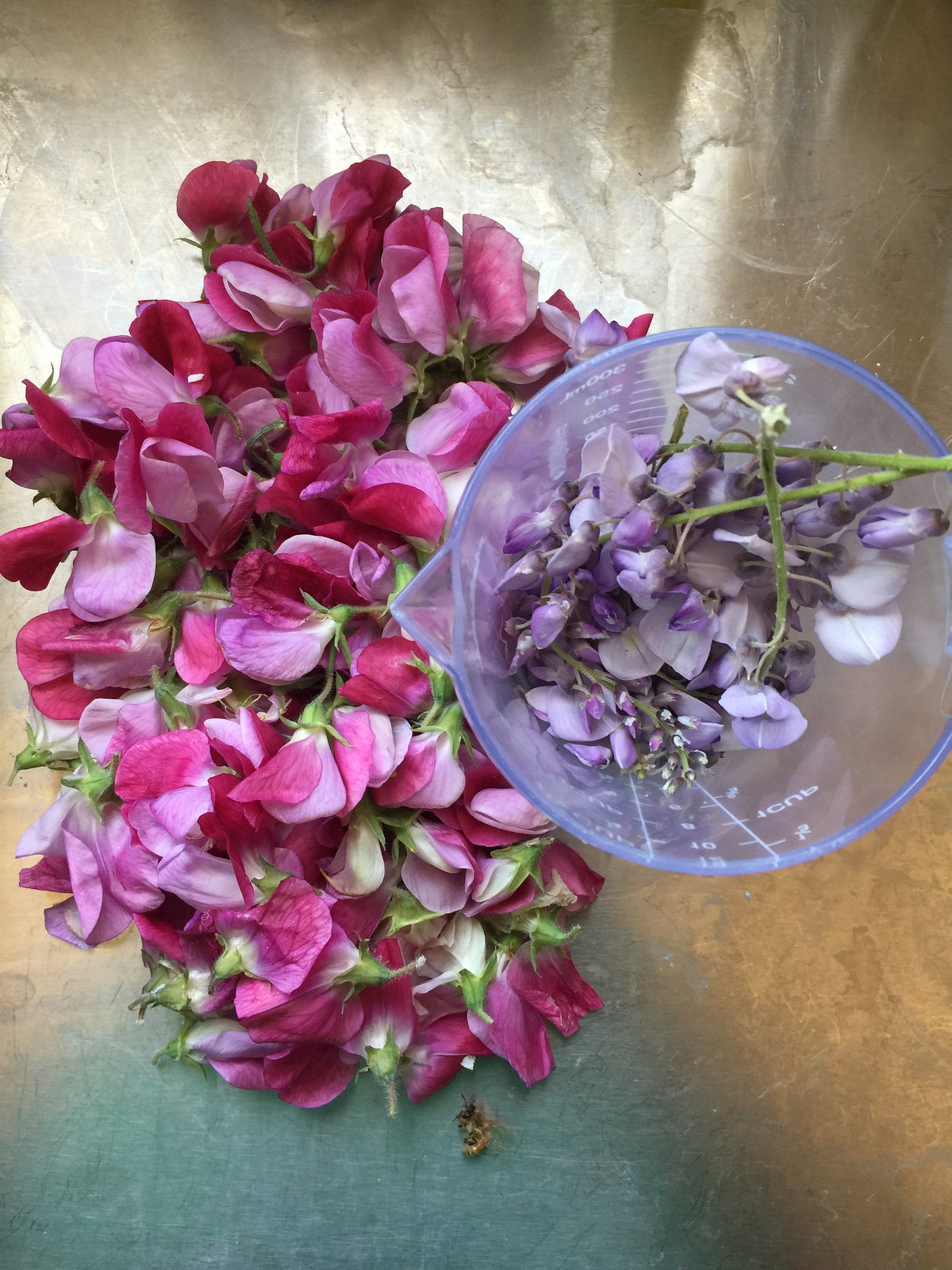 Here you see my post-enfleurage flowers of both sweet peat and wisteria. In other words: Trash. I have not only the best smelling garbage but also the best looking! 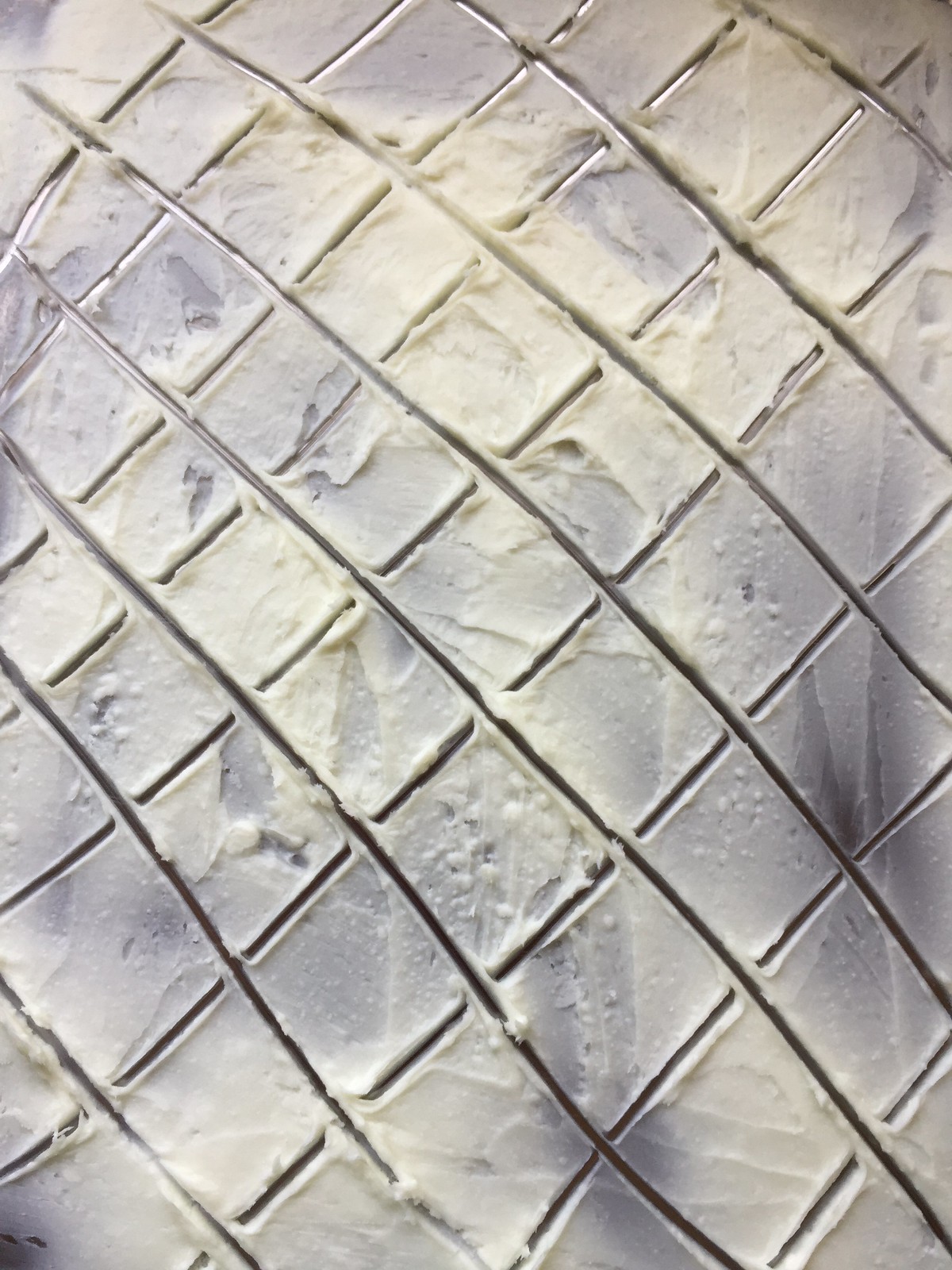 Next year is a blank slate... And I hope I get a better, more robust and abundant harvest, and also that it wouldn't turn on the tray. In the meantime, I'm actually feeling inspired to try and recreate it myself with my current arsenal of extraits from enfleurage. Wish me luck... 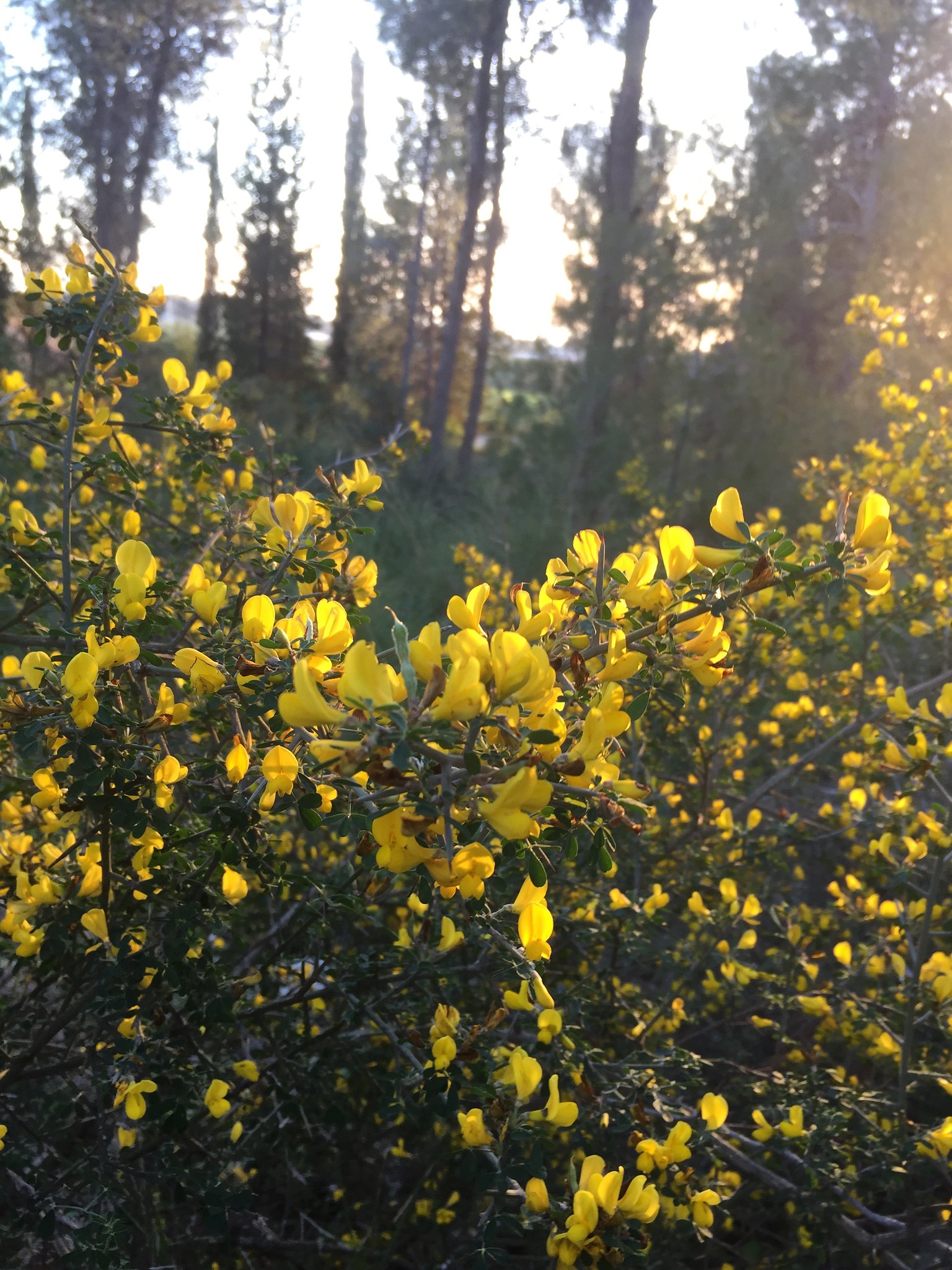 The spiny broom has been early to rise this year, creating yet another challenge in realizing my dream to extract it. It is still cold, rainy and I can't for the life of me figure out when is the best time to harvest this thorn. I did one harvest, and discovered yet again that the scent is too faint, perhaps the flowers are also a bit too old and worn-out. The ones I picked which were fragrant lost their odour by the time I got to the studio to place them in the fats for enfleurage extraction. It is becoming rapidly more evident to me that knowledge of the exact harvest time is key to success in enfleurage. I did a small trial, but the scent did not stick around at all. Considering the painstaking process and how much pain is involved (if you're not careful and get stung by the thorns it literally hurts) - I think it would rather wait till later in the spring when the non-spiny (read: thornless) broom is in bloom. Wish me luck please! 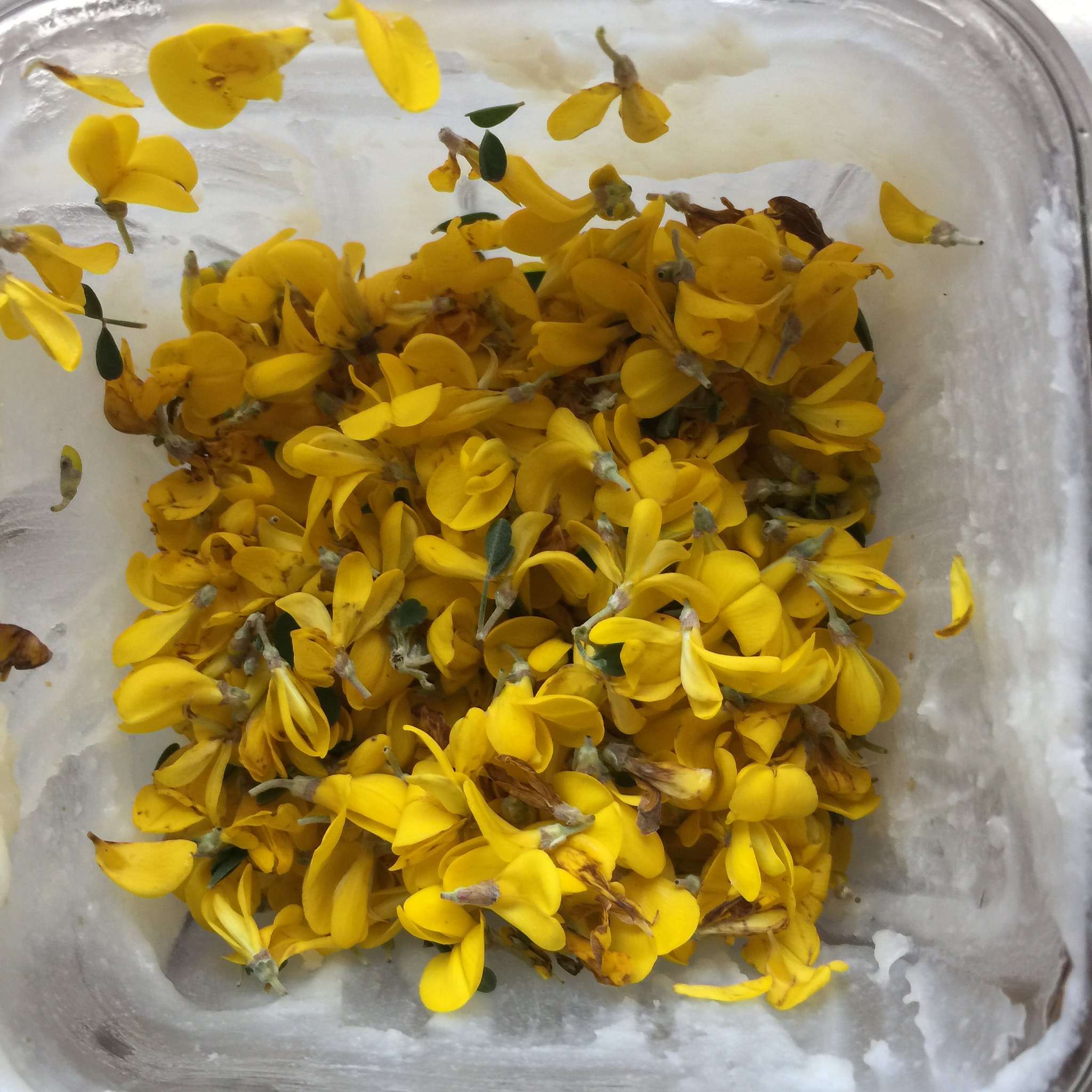 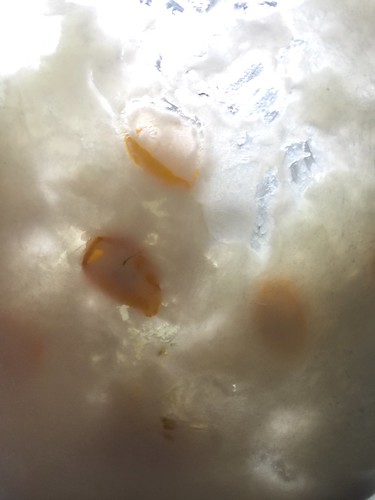 My narcissi finally bloomed but there are very few of them (still better than last year, when there were non!).
Here is a handful of pics to show you the process of my single-charge Narcissus tazetta (Chinese Sacred Lily) vegan enfleurage process. Wish me luck! 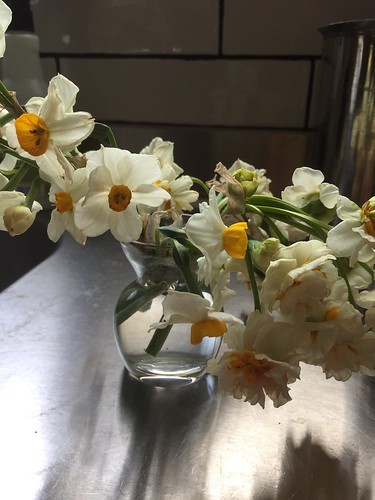 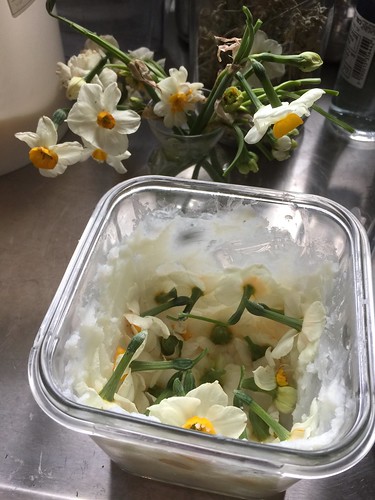 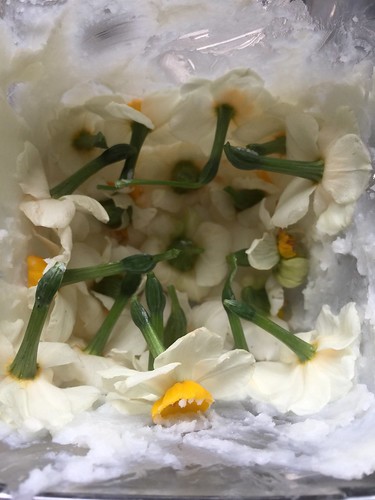