Burning incense on its own is an art form. Knowing when, how and what to burn in the precise quantities, and which technique is most suitable for a certain raw material is a pre-requisite for any incense-maker's traning, as well as to fragrance aficionado and incense lovers. This will help you understand the pyrotechnic aspects, and enable you to know which material is appropriate for which incense burning (and making) techniques.
Last but not least, in this course we will learn how to burn, explore and appreciate  individual incense raw materials from the natural world, including fragrant woods, resins, spices, flowers, seeds, fruits and peels of fragrant botanicals and animal ingredients used for incense and rituals from time immemorial. In this fun online course, we'll learn about:
1) Types of incense
2) How to explore and observe the raw materials
3) How to burn incense using several incense burning techniques
4) Exploring and observing the raw materials of incense
5) Energetics of incense materials
6) Healing potential of incense burning
7) Incense and its role for mindfulness and emotional well-being
The Listening to Smoke online program includes a kit of key incense materials and tools that we will evaluate during the course and live sessions.
The program is built from 6 sessions, that will take place over the summer on Thursdays, July 15th through September, from 8:00-9:00am Israel time.
Introductory rate for students who sign up for the pilot program, please sign up no later than July 14th. 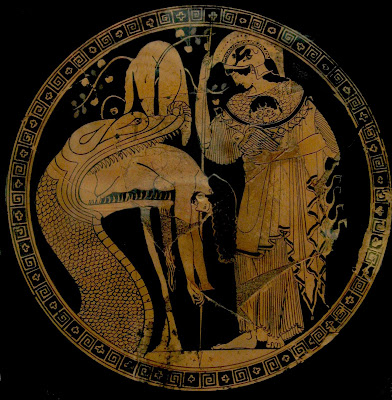 I've always admired the Greek Goddess Pallas Athena, since I first read about her as a young child in the Argonautica. Her wisdom, strength and poise impressed upon me that women can also be heroes. She always appears in warrior regalia: helmet and a spear. Her other symbols are the owl, the snake and she is often depicted with a symbol of the snake-haired Gorgon Medusa's head, either held in her hands, or placed upon her sash or shield. Pallas Athena is the one who have sent Perseus to bring Medusa's her to her, with full instructions on how to do so without turning into stone, which is the fate of anyone who gazes upon her terrible face.

If one looks deeper into the mythology, it is told that Medusa is who she is (meaning: so terrifying that whomever gazes upon her becomes frozen or dead-like) because of a curse Pallas Athena herself cast on her, after Poseidon have raped Medusa in Pallas Athena's temple. So Pallas Athena is not only a warrior but also associated with rage and revenge.

At the same time this makes one wonder “on which side” was Pallas Athena? Was she siding with the Patriarchal rapist god, or the woman who was raped? Was she commemorating her rage in response to the rape, and giving her the means to protect herself? Or was she enraged that a woman would allow such a thing to happen in the holy temple to the Goddess? Or is the temple actually symbolic of the woman's body - her personal intimate temple? I have a few reasons to believe this is all of the above. Medusa has become a part of Pallas Athena, either because she represents her more innocent side that was betrayed and raped; or because she was Pallas Athena's victim. And victims and their perpetrators are forever connected in an embrace that is at the same time a curse, and at the same time the key to their respective healing and redemption.

Is Pallas Athena in a sense is a very Patriarchal female-goddess, a female goddess who is trying to navigate through the new realms of Patriarchy, using masculine tools such as weapons and revenge? Or is she giving women the tools to redeem their frozen, traumatized selves and transform them into powerful magical beings such as Pegasus (the winged-horse that was born out of Medusa after she was beheaded)?

The story echoes an ancient story: The Descend of Innana to the Underworld, a Sumerian myth that is the most ancient written myth we ever found, written in cuneiform on clay slates some 6,000 years ago. In this myth we can peek into the Sacred Feminine and its power before it was tainted with fear, hatred and oppression. Inanna was the Goddess of Fertility and War, just like Pallas Athena reconciles within her Wisdom and War. Some say that Venus or Aphrodite was Innana's later form, being the tame goddess of love, beauty and fertility. But I think that Innana held within her all Sacred Feminine -  Pallas Athena and Aphrodite. She was both powerful, just and wise, as well as sensual, sexual and seductive. She is portrayed in that ancient myth as the master of her own self, body, soul, mind, spirit. She has conquered the world on all of its layers - the heavenly and spiritual (the sky or heaven), the earthy and sensual (earth), and lastly the underworld which is the shadow aspect of the world, the unseen, and hidden, the ugly. She is no frozen Medusa when she chooses on her own terms  to bring her own death upon her, because a lifeless body and yet she has a plan and she is able to come back to life, buy her way out of the underworld and even seek revenge at those too weak to support her sacred journey. Innana exemplifies a deity that is both dark and light, sensuous and clever, enjoys her body, smart and cunning, and can face her own death and conceive her own rebirth and redemption. She shows us how to be authentic and connected to our entire being on all its levels: light and dark, shadow and self, passive and active, spiritual and earthy and even beyond and underneath this world. And to me this is what I peel away when I look at the myths of Pallas Athena as well.

In her own way, Pallas Athena integrates Medusa, her frozen and frightened self, her lower existence in the shadows, by wearing her as a brooch or perhaps even a trophy on her regalia. But this integration is symbolic and not internalized. Medusa is seen as an enemy; while Innana's descend into the underworld is considered her greatest achievement, after which her lower self and higher self become one and whole; and her decaying carcass, her shadow is embraced and returned back to life and back into the land of the living, to continue leading a life, making mistakes and continuing to learn and evolve. Pallas Athena, without knowing, is forever frozen just as much as her trophy, for not embracing her fully. For not allowing her weaker aspects the space they need to be felt and there for to heal and become whole.

Palas Atena perfume is one of my first creations (2001) and is an Oriental-Spicy perfume with champaca flowers, lavender, neroli and cinnamon over a base of amber, patchouli and sandalwood. It brings me a bit of synenthetic response, seeing the colours of crimson and gold which I imagine the goddess to be wearing. I hope wearing this will enable you to reconcile all those aspects of yourself. When I wear it I feel powerful and smart and sensual. I hope it will do the same to you, and maybe even other things that I can't even imagine.

The image is of Pallas Athena Attic red-figure kylix painting from c. 480-470 BC showing Athena observing as the Colchian dragon disgorges the hero Jason. 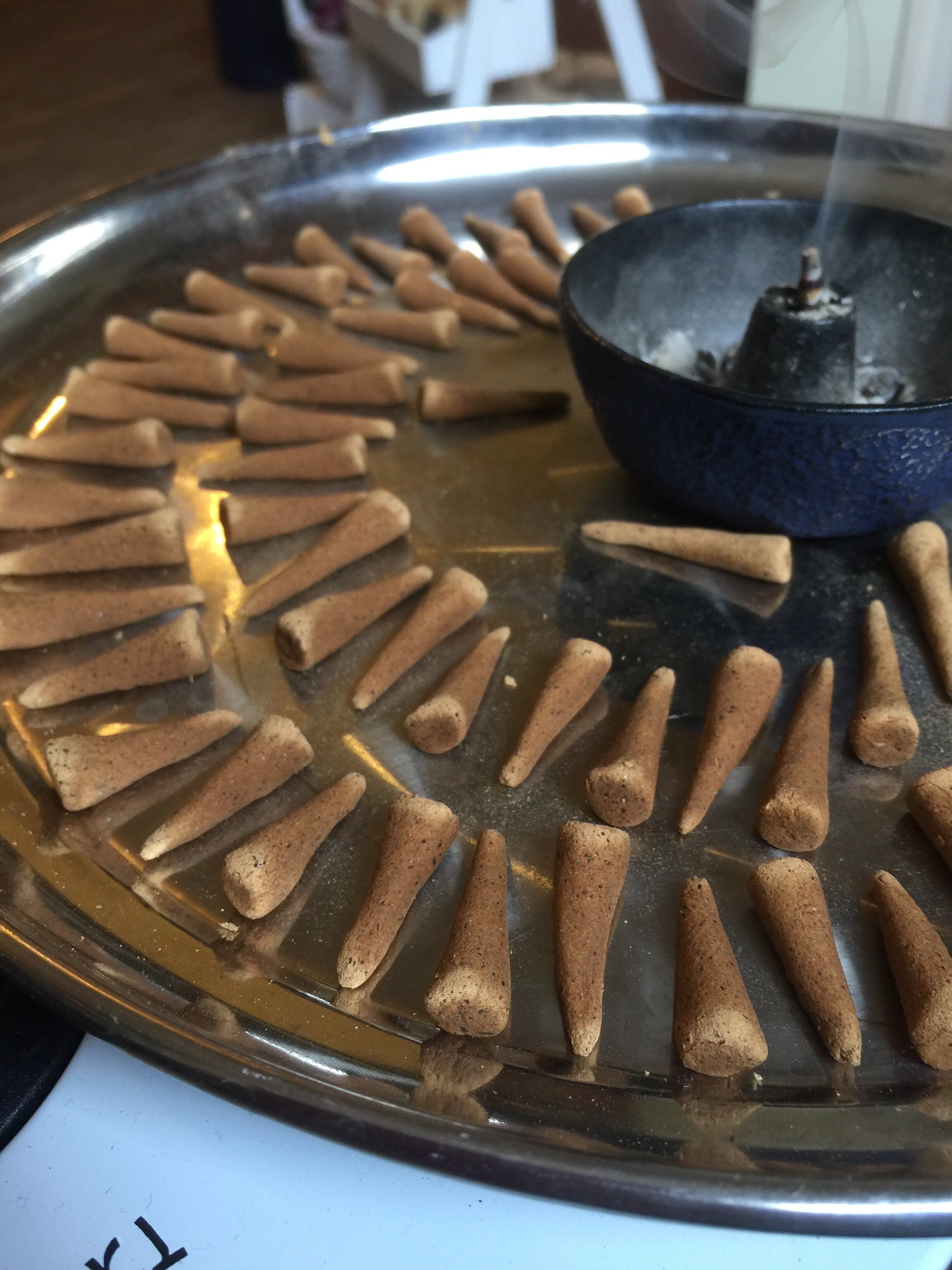 I'm getting deeper into the world of incense again, which is like coming a full circle (for those who don't know me, my perfume path began with incense). I enjoy the earthiness of this occupation, taking into consideration other aspects that are not relevant to the ethereal perfume making, such as shape, colour, texture of all the materials and how they need to be processed by hand. And also I'm a bit of a self-confessed incense addict when it comes to burning good incense. It's a great way to start the day with and clear all the cooking smells after breakfast. It helps me to concentrate when I want to practice Pilates or meditation. And it changes the atmosphere in the room within a few moments, sometimes also making people who are terribly chatty and obnoxious swoon and start to really listen to what's around them. This is especially pertinent to large groups that sometimes visit my studio.

It's much trickier than making perfume, so I am progressing very slowly. And find it a challenge on all fronts - first of all there is the challenge of designing the fragrance to smell good in all stages, including after the burn (aiming for that wonderful afterglow you find in a room long after an incense has been lit in). This is affected by many other factors besides the actual materials, including the shape of the incense. And this is where I'm still struggling majorly. 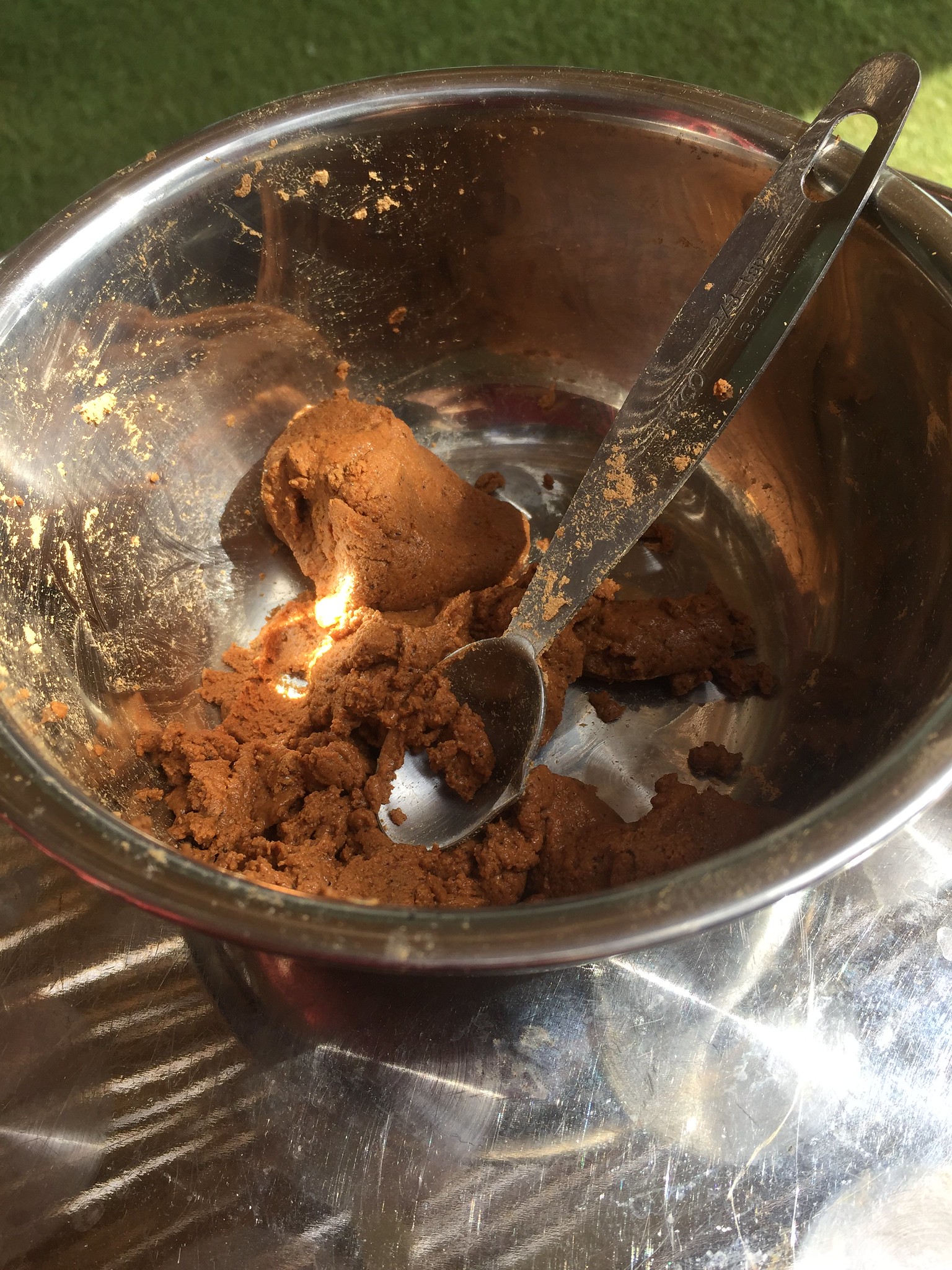 I've been trying to form incense sticks and almost every time I make a batch specifically for that shape it ends up impossible to make them properly (these fuzzy sticks in the pic below are not what I'm after!). 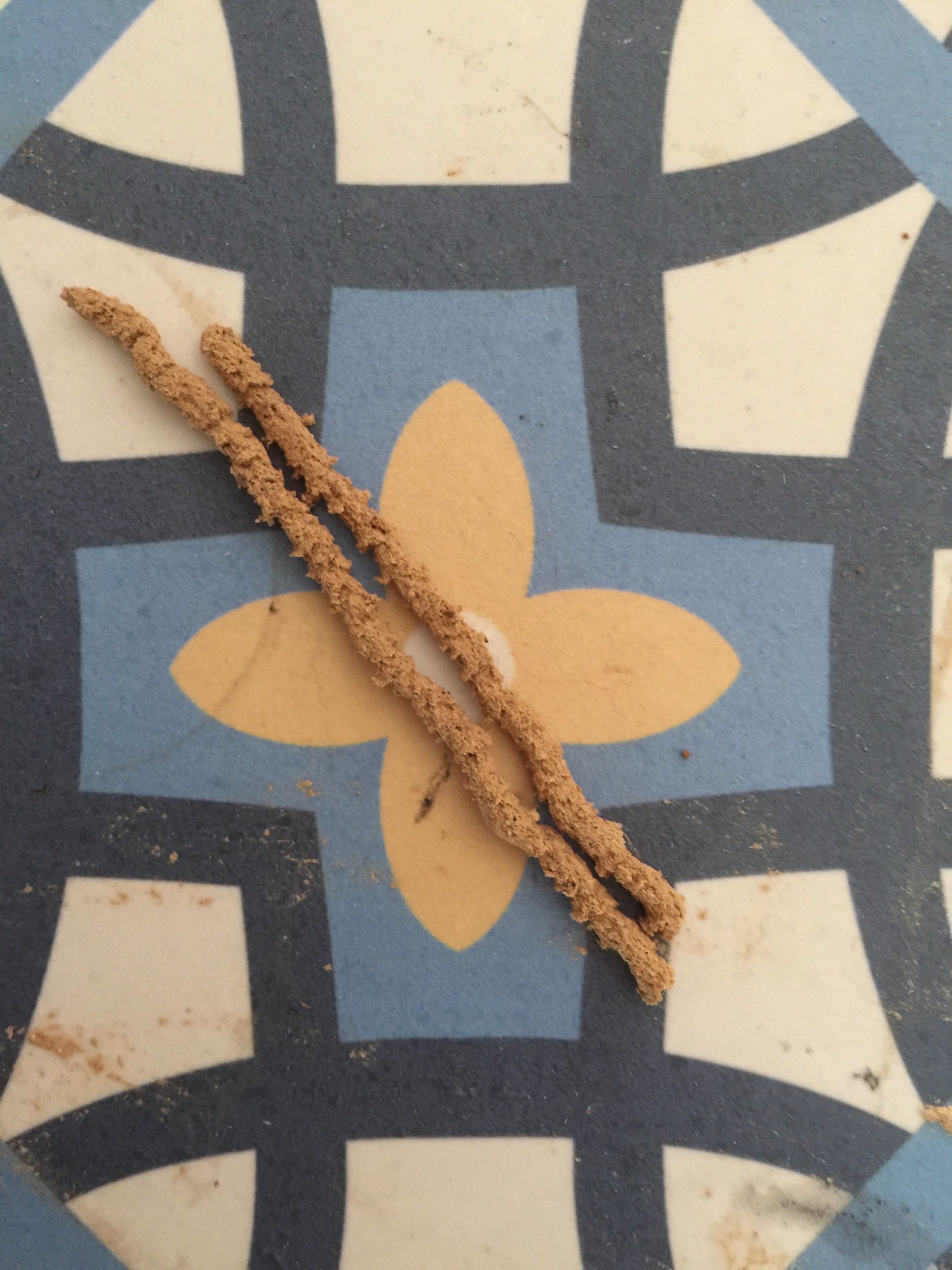 So again, I resorted to making cones. These are lovely looking albeit labour intensive to shape by hand. What I like about them is that they stand on their own and don't scatter ashes all over the place. They can be placed on any heat-proof surface and will hold their shape after combustion. What I like less about them is how fast they burn and how much smoke they make. Because their circumference of ember keeps growing, they only intensify in smoke as they progress down the cone. 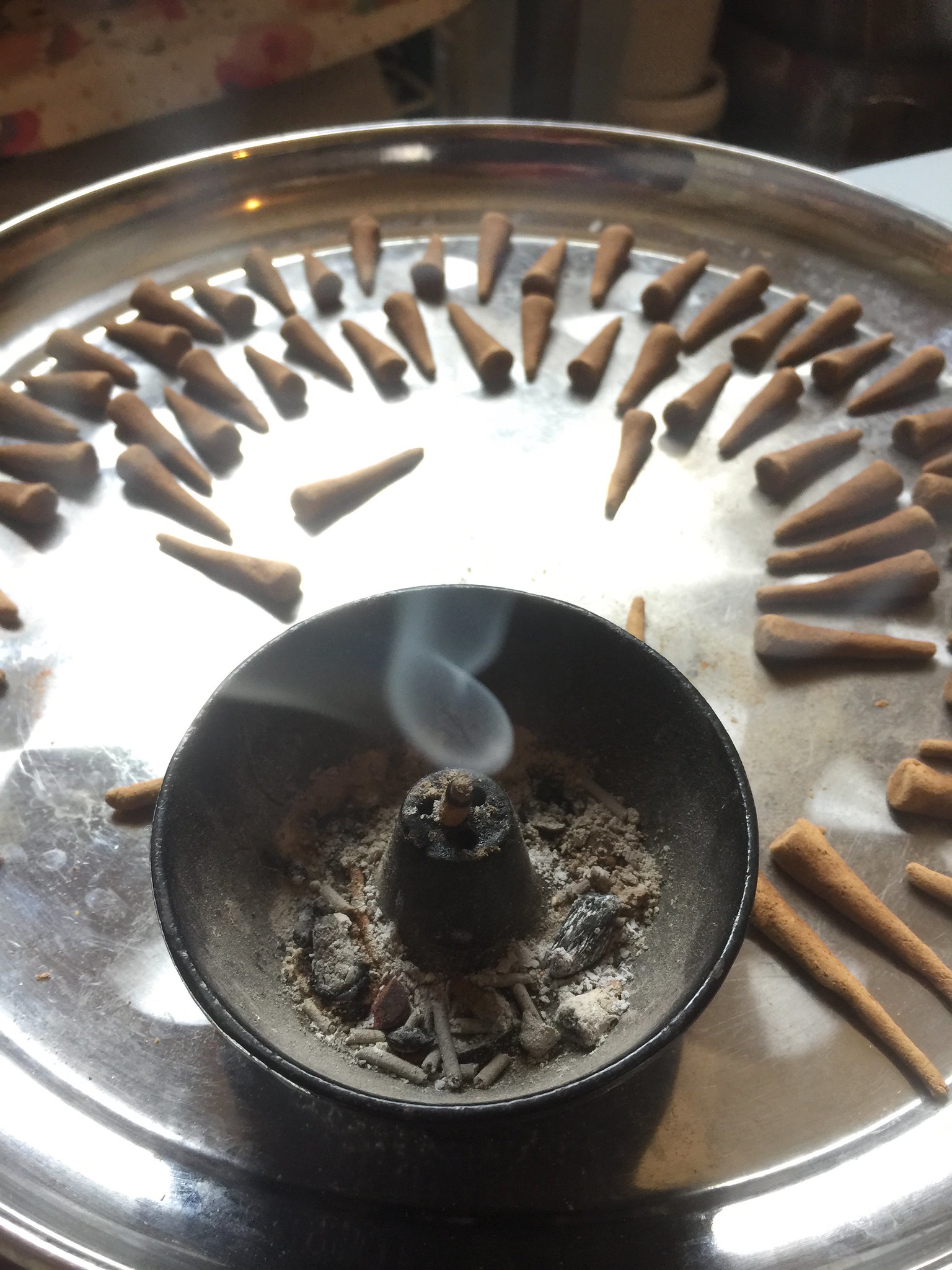 The result of these Four Copals incense cones is almost as perfect as I wished them to be. Their base is a combination of sandalwood and trailing arborvitae, the latter was added as a last resort because the mixture was far too soft and moist. I wish I added something more neutral - I have a feeling this creates extra smoke. But I was worried about making it sandalwood-dominant. It has a pinch of Palo Santo, and other than the sandalwood, it is very heavy on the copal: four types were used and ground by hand in a marble mortar and pestle: Mayan Copal, Gold Copal, Black Copal and White Copal. They are now available for purchase (very small amount was made, but I will happily make more if you like!). 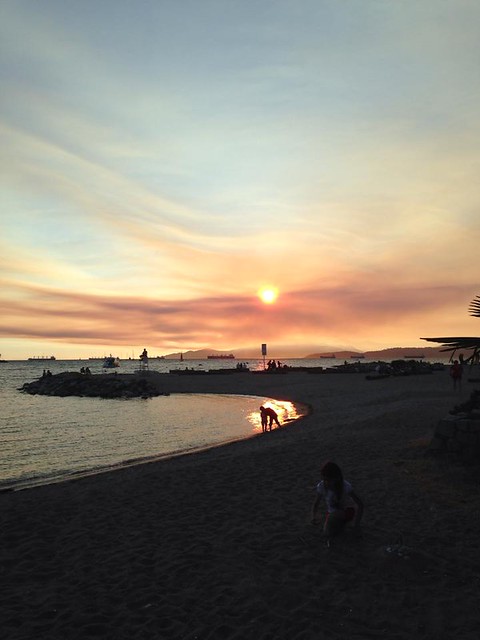 Thank you to Victoria Jent's glowing review of Sunset Beach on her excellent fragrance and beauty blog, EauMG:
"Sunset Beach wears like a powder of finely milled precious woods with a subtle coconut milk-like sweetness and vanilla custard-like ylang-ylang. The dry-down really does remind me of sun-bleached driftwood and warm, sun-kissed skin. It’s creamy with a sweaty bitterness from woods like sandalwood and massoia (…) Warm, milky woods. It’s a summery, beachy fragrance that isn’t “tanning oil”. Yay!" 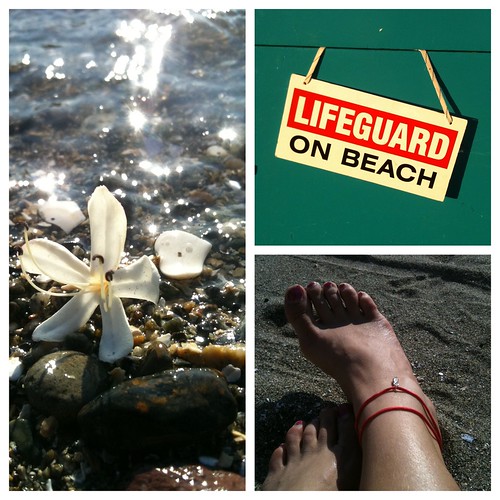 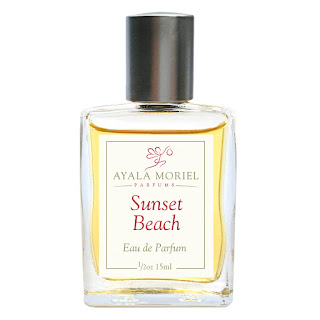