There is nothing quite like the bond between a mother and her baby. When I just started creating perfumes, one of the first perfumes I made was Indigo, inspired by my mom’s unique Cancer personality of contrasting warm-and-cold (and maybe a little bit because I really missed the soft and gentle touch of holding her hand which is hard to do when she’s in Tel Aviv and I’m in Vancouver). Indigo captures that sense of soft motherly touch, smooth and almost glimmering like the indigo-blue velvet hoodie my mom gave me before I left for Canada, and with the two scents that remind me of her most of all: aniseed and violet flowers. At the same time, it was a very abstract creation and entirely based on my subjective experience of motherhood on the receiving end.

But it wasn't until years later (when she finally visited me in Vancouver) that I learned that besides these two distinctive aromatics (especially when they're together in the famous French pastilles, my mom also went gaga after the scent of chocolate and vanilla. That was before she lost her sense of smell, of course (Anosmia, loss of the sense of smell can become lost due to several things, such as chronic colds or sinus infections, head injuries, and trauma) but that does not stop her from enjoying the darkest, most velvety chocolate and dark chocolate sorbetto - so I was not surprised chocolate was up there on her list. But vanilla? Well, that was a surprise. 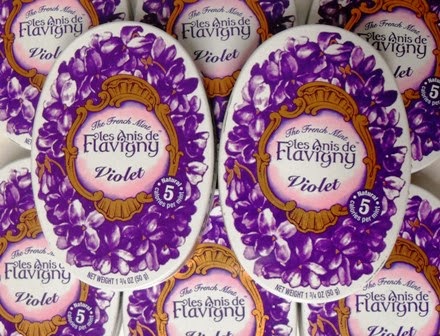 I set off to create something new in honour of my mom (and her lost sense of smell). Something that she can wear and be proud of even if she can't actually smell it. Something she can imagine herself immersed in, no matter what mood strikes (Cancers are infamous for their mood swings!). Something a little simpler and more down-to-earth, not as artsy as Indigo, but still will appeal to the Bohemian princess that my mom is...

And the name came first - a lady's name, perhaps her stage name, but still with an unmistakable first name and surname - but that still alludes directly to what she smells like. Violets and chocolate are the core of this fragrance. The violet is magnified to make her almost larger-than-life with supporting notes of leathery cassie and creamy orris butter. The leathery aspect of cassie is then alluded to in the tobacco leaf as well. Instead of tarragon, there's a tarragon absolute in the mix, which is more confectionery and multi-faceted than aniseed. Deer's tongue absolute makes the vanilla feel even more edible and sweet, yet still adds a certain leafy quality that mirrors the tarragon absolute's hints of green. 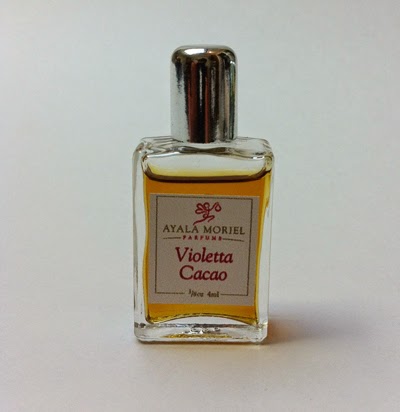 Violetta Cacao is the olfactory manifestation of boho-chich: violet's fickle ionones tease and tempt and decadent cacao and vanilla are supported by notes of buttery orris, sweet tarragon and liatrix. The resulting perfume is an unconventional indulgence with a regal twist (violets are often associated with royalty). Dab some on and feel like a bohemian princess!

* Note: Violetta Cacao will be only available during the month of May, to celebrate Mother's Day.

L’Heure Bleue is one of the true masterpiece by Jacques Guerlain. I see it as standing hand-in-hand with its sisters Mitsouko and Vol de Nuit. There is certain quality that underlines those three masterpieces and makes them even more than an amazingly beautiful-smelling perfume to wear - but truly a work of art.

L’Heure Bleue is sophisticated and anigmatic, and yet has a unique melodramatic peacefulness that definitely does not lack reflective, philosophical melancholy…
When you realize, once the last dusky lights are giving themselves away to the first stars, how beautiful the day was, and how wonderful the deep blue night is, and the world is so vast and immeasurable and so full of beauty that it may even make you want to cry…
This moment of beauty is so eternal that it makes you feel your mortality in a painful way. Still, you are content with yourself and your life that you know if it will be taken from you that moment, you will feel complete and in perfect harmony with the universe…

You breathe in the silent fresh air of your warm summer garden… The night blooming jasmine is beautiful and intoxicating… The grass that has been just watered, full of murmurs and insects’ summer-songs… The orange blossom flowers are just folding themselves for a long, peaceful night sleep. You pick a late blooming rose, a deep, velvety-purple-crimson rose, her petals already soft after warming up in the sun for the past three days. You hold the rose and fondle the petals and hold them against your cheeks to sense the warm scent of a mature rose releasing the peak of her last fragrance into the night air... And it is all part of you now, there is no need to hold on to it.

Those beautiful, magical notes interweave with each other so gently that it is hard to tell one from the other. Together they create one impression that in my mind I visualize as a very earthy brown colour, though somewhat rich and copper like. I simply cannot see a deep blue when smelling l’Heure Bleue, though the different notes on their own make sense and tell the story of this time of the day:
There are the subtle citrus and anise top notes that are there to accentuate the soft florals, including violet flowers, and link them to the deeper base notes.
The root of the composition, apparent from first application, is a soft and bittersweet heliotrope, combined with tonka bean that accentuates the softness, yet also possesses the bitter-almond-like undertones. Vanilla and orris root are also present, to support the overall powderiness and soft, mature and philosophical nature of l'Heure Bleue.

The drydown is somewhat more smooth and ambery (though it is hard to see l’Heure Bleue as an oriental per se –it has such a unique individuality and perhaps deserves not to be categorized at all…Just like Vol de Nuit and Mitsouko, I am afraid it does not quite fit into categories…)– The drydown is a bit less powdery, with a vanillic accord. It also has some woody notes in the drydown – I suspect vetiver, but cannot quite pin point it. I will not be surprised to find some oakmoss in it either, though not in a chypre context but an oriental context, and perhaps some underlining spices that are subtle and are not meant to be recognized but rather create a warm undernote to support the rest of the scene.

There is something in it that totally reminds me, surprisingly, of Mitsouko – the fruitiness that is quite dry, bittersweet (dry peach like notes in Mitsouko, and the cherry-like notes in l’Heure Bleue); and a certain dark woodiness at the base that is interesting, mysterious, hard to grasp – but once you get it you are totally captivated!
The fruitiness of l’Heure Bleue lasts much longer though – as it originates in the heliotrope base notes, rather than the peach top notes in Mitsouko (that most people find they fade just a bit too quickly after been exposed…).

L’Heure Bleue is probably the most incredible inspiration one could have ever found for a perfume – the name is beautiful, captivating, alluring, enchanting...
Initially, the fragrance itself did not do the same thing to me - It seemed to be extremely sweet, with a dominant, bittersweet heliotrope note in it, and dries down to a rather interesting and comfortable ambery-powdery vanilla. It wasn’t until I tried l’Heure Bleue in pure parfum that I got to enjoy, understand and appreciate it more – although I believe I only touched the surface of this aromatic mystery. It smelled intensley of jasmine when I smelled it directly from the bottle, and from there the images started flowing...

When I first heard about l’Heure Bleue I was so fascinated with the inspiration for it that I decided to create my own interpretation for such a magical hour. It immediately made me think about my mother – an enigmatic lady (I am still trying to figure her out…), she is an aquired anosmic who always loved anise and velvet. I created for her the perfume Indigo, an enigmatic concoction of anise, caraway, bergamot, boronia, orange blossom, jasmine, violet, spices, incense and amber. To be honest, there is hardly anything in common between the two fragrances, left for a few notes and the insipration. Indigo is soft and cool as satiny-velvet, and smells like a nightfal in the Wadi – the dried riverbed, full of luscious greenery and vegetation, and the sounds of frogs and crickets.

I only learned about l’Heure Bleue’s sweetness after creating Indigo (I didn't find l'Heure Bleue until after I created my own interpretation for that inspirational and magical hour). So, once I actually smelled the original creation I must admit I was somewhat confused and initially, perhaps a bit disappointed: it was not what I expected, it did not make me think about the blue hour – until after I worn it several times in the parfum form, which unfortunately is becoming harder to find by the minute…Like Mitsouko, I think it takes rare personality to carry it through easily and without tapping into it first…

Now that I have given l’Heure Bleue a chance, and tried it several times, I must confess that I understand why this classic has survived two world wars as well as the currently overwhelming age of perfumery.

Artwork: Frank Holmes - Blue Twilight
Back to the top