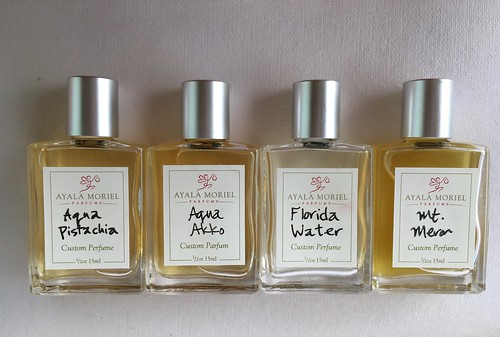 I wasn't planning on releasing any new perfumes this year. But this kinda just happened, as a result of the wonderful and inspiring collaboration with Jullius Craft Distillery. Some of these fragrances were created a long time ago but were never added to the online store, such as the Agua de Florida (Florida Water) I made way back in 2013, and the Aqua Pistachia (mastic lentsik waters), which I created in 2018, after the inspiring Mastic Magic workshop I held here at the studio with Dan Riegler of Apothecary's Garden.

So without further adieu, I present to you an Aqua Mirabillis Collection of fragrant eaux: Cleansing and purifying waters, inspired by Aqua Mirabillis formulations from the time before perfumery separated from medicine, and the pharmacy was fragrant and redolent of healing herbs.

These Medieval "Miracle Waters" were the first alcohol-based perfumes in Medieval Europe. Citrus peels, along with astringent herbs, were tinctured into what was called then “Aqua Mirabillis” AKA Miracle Water – were used both internally as medicine, and externally as disinfectant, for relieving sore muscles or simply as a substitute for bathing. Inspired by these ancient concoctions, and the abundance of healing plants in the Mediterranean wilderness surrounding the new studio in Clil, our collection of Aqua Mirabillis was born. These are perfumes for external use only, featuring ingredients rarely found in perfumery, which I grow, harvest, forage and tincture all by hand in the traditional old ways. Ingredients such as mastica, varthemia, vitex, wild oregano, thyme, sage, mint and more find their way into these fine fragrances that create a sense of well-being and connection to the Earth.


Agua de Florida
Spanish fro Florida Waters, these mean "Flower Water", due to the higher proportion of lavender relative to the European-style Eau de Cologne, as well as some rosewater. Other New World botanicals include lime zest, cinnamon bark and clove buds. And to give it a local, Galilee twist: Mediterranean lavender, AKA Spanish Lavender (Lavandula stoechas) tincture from my herb garden, Grapefruit blossoms from my own orchard lend their sensuous allure. And a hint of tobacco for its sacred and protective properties. Use these Agua Florida to freshen up during the hot summer months, and in ceremony for purification at the end of a healing ceremony which involved release of pain, grieving, tension and general heaviness.

Aqua Pistachia
Mastic resin is the original chewing gum, and is used to flavour Middle Eastern ice creams and desserts; the leaves also are beneficial for oral hygiene but also prevent ulcers and have myriad of health benefits and medicinal uses, including uterine health. But most of all they are the most refreshing fragrance around. They smell forest-like without having a single pine needle in them. What I tried to recreate with this scent is the icy, brisk scent of hail on a cold winter morning in the Galilee. There are no words to describe the smell of the mastic bushes when they clash with these icy forms of precipitation. So I will let Aqua Pistachia speak for itself.

Aqua Akka
Cleansing and purifying waters, inspired by Jullius Distillery's Akko Gin - a wild gin that is made entirely of local botanicals indigenous to the Western Galilee. To translate it into a fragrance, have combined several green, leafy botanicals that I find while roaming the Western Galilee and Mount Meron. Some traditional to gin, such as juniper berries; and others completely out-of-the-box, such as vitex berry and myrtle leaves. Cedar from the Morocco is here to replace Cedar of Lebanon, one of my favourite trees and destination while hiking on Mount Meron. Finally, a floral element, without which a perfume can hardly exist: handcrafted grapefruit blossom tincture from my own organic orchard, giving it body as well as a certain earthy sensuality.

May Meron (Mt. Meron Waters)
Mt Meron is a holy mountain in the Western Galilee, the second highest peak in all of Israel. Oak forests and regal Cedars of Lebanon grace its evergreen slopes, and its peak is usually shrouded in clouds, fog and mystery. It is home to unique vegetation, some plants that are found nowhere else in the country, which grow on a bed of quartz crystals, nonetheless.
May Meron are cleansing and purifying waters, made in the tradition of Aqua Mirabillis - the miracle waters of Medieval Europe, in the early days after the discover of alcohol distillation. This fragrance is inspired by an autumn pilgrimage to Mt. Meron, which is abundant with wild medicinal herbs, Medronho berries, and saffron crocuses. These healing waters were born out of a collaboration with Jullius Craft Distillery and are the perfume interpretation of the magical and healing Jullius Bitters, which are redolent of wild herbs such as white mint (Micromeria fruticosa), sage, myrtle and mastic.
Apply these Mt. Meron Waters just as you would any perfume, as well as in rituals for their protective, grounding, warming qualities, or for purification at the beginning or end of a healing ceremony. Florida Water, a photo by Ayala Moriel on Flickr.
My own version of Florida Water created early last week was similar to the versions published by Poucher, only with my own improvements - taking my favourite components from both. Its working name was "Commercial Drive Water" because this is where you will be able to find Florida Water in Vancouver - typically in a Latin grocery store!

After a week of maturation, the geranium and petitgrain take centre stage, with nuances of mint, lime and spice adding the characteristic American sweetness. The amber I selected for this formulation is what I call amber No. 5 - a honeyed, slightly animalic amber base I created for my own palette. It does not exactly remind me of Commercial Drive though. For that I think it will actually need some patchouli ;-) I'm surprised at how sweet and ambery the result is once this has matured. It's not nearly as Coca Cola as I've imagined it to be. While refreshing nonetheless - and I'm testing it in the high humidity of the city of Tel Aviv at midsummer - the sweetness in it is surprisingly tolerable. I was also surprised to find that Mandarin Ambree (one of the two new colognes from Hermes) to be extremely ambery, bordering on an orange candy affair. It's not exactly cooling, but it certainly presents a new twist on the eau de cologne theme.

It's interesting to note, that cistus has been used in Spanish style colognes for centuries. But that note is not just ambery as labdanum (from the same plant - Cistus ladaniferus), but also herbaceous-woody-pine-like, and therefore a lot more appropriate in the toilette freshness of traditional eaux de colognes. I'd like to explore more on herbaceous ambers in the eau de cologne genre. But more so, I'm inspired to create something to slice through this Tel Aviv slimy weather that will somehow relate to the locale. 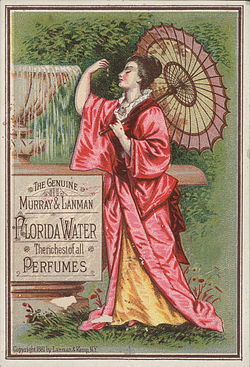 Many years ago, I read about Florida Water in Poucher's excellent book "Perfumes, Cosmetics & Soaps". But it was not till last Thursday, that I stumbled upon  big splash plastic bottle of the real thing by Murray & Lanman at an acquaintance's home in Vancouver's East Side.

It was a hot day, and I was stressed out running too many simultaneous projects in preparation for yet another long trip (I think I've turned into one of those creatures who "divide their time" between more two or more places. It sounds enticing on paper; but is uber-stressful in reality.

I splashed a generous dose all over my wrists and spilled some more on my white shirt. That Florida Water was refreshing yet calming; familiar yet strange. Minty citrus eau-de-colonge type mingled with intense spicy notes of cassia and cloves, a combination that inevitably brings to mind the popular coke beverages (based on the contrast between lime, cassia bark and clove buds) - but not so much that it makes you feel sticky. By the looks of the bottle though, you'd think it's a flavouring syrup for sherberts or sodas, what with the rather squishy plastic bottle and all...

Apparently, this delightful little piece of fragrant history (formulation dating more than 100 years ago, in 1908 - though Florida Waters have been around as early as the beginning as the 1800's) can be had for $20 in Latin stores on Commercial Drive - and even cheaper than this online. I decided to trace back that formula and try to blend it myself this morning at my studio. The morning kinda turned into night and here I am reporting at the end of yet another rather hectic day! Poucher divulges two formulations, slightly differing from one another, both appear on page 325 in my 1959 edition of the 2nd volume:

I decided to set off to make my own formula, based primarily on the 2nd version (as Poucher considered its result to be a "better product", yet substitute the synthetic rose otto with the real thing (Bulgarian rose otto, to be exact). Additionally, and most naturally, my amber bases aren't synthetic either, and the one I used is my own secret formula (well, it's not that secret, as I've shared it with numerous students: I've decided to use what I call "Amber No. 3").

While both are pleasant enough, and I can only imagine how wonderful they will behave if refrigerated and splashed on the skin on a hot day - they are still rather simplistic, and lack the bracing mintiness that I loved about that Murray & Lanman formulation. They read more as cosmetic preparations (Perhaps facial tonic or an aftershave?).  I'll try to pick up a "copy" at the Latin grocery stores on the Drive tomorrow, and if I'm lucky will also try to make my own "Commercial Drive" rendition of this all-American eau.