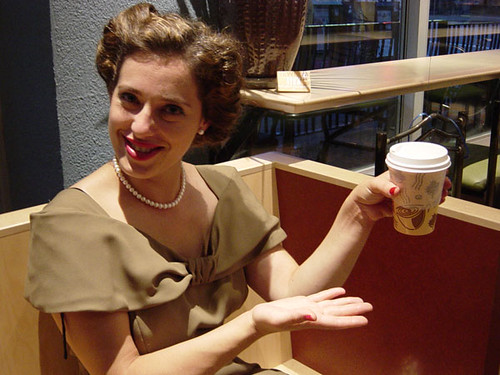 "The first few sips are the hardest", I tell my daughter, who's in her favourite coffee shop in Vancouver, sipping on her favourite beverage ever, which she always drinks. Except, she hasn't had it for almost two years. We simply weren't around.

First comes the ecstatic response when seeing the cup, filled over the brim with this crushed ice and mocha. Then comes a sip, and her facial expression changes. There is nothing wrong with the taste. It's exactly as she remembered it. Perhaps it's even too much the same as she remembers it. I can see how with every sip she's turning sadder, getting deeper into another place and another time then this very moment in the coffee shop where we're at. And the tears start welling up.

The first few sips are the hardest. The first one is a big wave of happiness, familiarity, comfort. Like the first time she had it (probably with her dad). Then she remembers sitting next to him in the coffee shop on Robson street , watching attentively over his shoulders as he's writing code on his laptop, for hours on end. It's a happy memory alright. Except that they don't do this anymore. And the wave of happiness is washed over by a tsunami of sadness, with rushing memories of all the good things that were and ain't no more. And also all the not so great memories like that time when mamma ordered the wrong drink and... oops, Mom, my coffee spilled on the floor. And before you even know it, she misses everything - elementary school, and summer camp, and this babysitter, and another. And every each person that ever got her that drink in that very same coffee shop.

The first few sips are the hardest. And if you're experiencing this flavour nostalgia for the first time, after many years of not tasting (or smelling!) something that has been deeply engrained in your life for ever so long, and don't have the words to express it, or the emotional tools to cope with it, it might become a natural disaster of personal magnitude. Maybe you'll never even drink coffee again after this. It's just too much like an emotional rollercoaster, with the ups so high and the lows so devastating that this aroma has now registered as a dangerous thing in your mind.


Those who are new to SmellyBlog may not understand the connection to perfume... Well, there is none. Except that the author of this blog happens to have an 11 daughter with autism. She has recently (3 years ago) learned to speak our language yet we are still very delighted to speak hers to the best of our ability. Our communication relies heavily on other means rather than verbal...

Related article: The Language of Autism in the New York Times

Thanks to all of you who have commented and participated in our Autism Blogala this month - We raised $51 that will be donated to Autism Community Training in BC. Although this is less than I was hoping to raise, I have a feeling that I contributed by sharing my thoughts and stories with you, and help other parents and individuals with autism to feel more comfortable sharing their experiences.

We will have another autism Blogala in October 2007. In the meantime, you are invited to visit our Pumpkin Blog.

This is Tamya two years ago in early Fall 2004. Her femur is broken and she is sitting in a wheel chair posing for a newsletter of The Corporation. Her entire left leg is in stabilzed by a brace. This was the most traumatic event in her life. The pain and the helplessness has forced her to use language in situation in which otherwise she would have been self-sufficient. She learned to trust us, her parents, in every detail of her life and had to communicate more complex needs. She learned that she can lean on us to support her cope with pain. In a sense, this was Tamya's re-birth. It was as painful as birth and she emerged out of this extreme experience a completely different person. At the age of 8, the unbelieveable happened: Tamya started talking.
To read more about the story of Tamya's transformation, visit the Pumpkin Blog.
Don't miss tomorrow's last episode in the Autism Blogala: the story behind Tamya parfum. The winners of the Blogala Draw and the Annick Goutal quiz will be announced on November 1st.
At that time (Fall 2004) I was wearing Yohji more than ever, as I just discovered that scent. From than on, Yohji reminds me of this transformation from pain to sweet victory of overcoming one’s own obstacles… Yohji will forever remain a scent that is difficult for me to wear, as it brings the ambivalent feelings of this family trauma and the significant inner change it triggered in the three of us. Ironically enough for me, Yohji also starts green and with ozone notes that are peculiar and somewhat aggressive. Both notes are extremely difficult for me anyways (perhaps the only two that I have a very strong adverse reaction to)… There is also an intense bergamot note, like an intense sniffage of an ultra-fresh Earl Grey teabag. The ozone gives up on its domineering aspirations after about half an hour, and by the time you reach the basenotes, the greens grassy notes dry down (literally…) into the sweetest coumarin accord ever – just like fresh cut grass that is left to dry in the warm sun. Upon drydown Yohji turns around 180 degrees and reveals the most luxurious confection of vailla, caramel and juicy raspberry syrup, all dusted with a powdery comforting softness. I always wanted to write a review of Yohji, but the opportunity occurred only now. I feel that only within this context my impression and experience of Yohji is the most truthful (though extremely subjective).
Top notes: Galbanum, Green notes, Ozone/Oceanic notes, Bergamot
Heart notes: Praline, Raspberry
Base notes: Coumarin, Vanilla, Sandalwood, Musk

This year is the first year that Tamya can tell us how old she is: Ten!
She had the perfect birthday:
Lots of friends visiting
Birthday Cake (we made blackforest cake together!)
Pumpkin Carvin'
Lots of cool presents (mostly craftsy stuff, including smelly markers, scrapbooking stuff such as stickers and tracing templates, her first journal - with a lock! - and her very first set of acrylics and canvas frames!).

We now just got back from getting her favourite Gelato - four scoops as always: Mango, Black Sesame Seed, Spiced Pumpkin and Vanilla. Surprisingly - no coconut this time!
If this combination sounds weird to you, let's set the record straight: these are best eaten, according to Tamya, when mixed together, rather than enjoying them separately. Perfumery is all about mixing the unlikely component and creating a new whole that is greater than the sum of all parts. Tamya is showing early signs of talent in that direction. And did I mention her new signature mixture of her coconut body spray with her pineapple detangling spray? Smells divine, though not quite practical...

Please participate in our Blogala Autism Fundraising! Only three more days to go, and you can win cool prizes and also contribute to a good cause!!!

Today I was wearing Tamya perfume in honour of my daughter. It now reached the last phases of the dry down, which are soft and subtle musk and vanilla. A soft way to end an eventful day... Tomorrow I will be telling the story behind this haunting perfume, which is gathering a growing circle of admirers.

P.s. One of Tamya's little friends had a tea party in Tamya's room last night. She poured almost the entire content of her Diorissimo mini into one of the miniature tea cups. I noticed a very pretty and familir scent suddenly appeared around her and her mom towards the end of the day, but it didn't really occur to me what it was until I cleaned up the room the next day... And only tonight (when I was washing the dishes and the tea cup amongst them, which made the kitchen mysteriously gorgeous smelling) that I realized that the orange-coloured thick residue in the teeny tea cup was not ancient orange juice, but an evaporated Diorissimo!
Back to the top