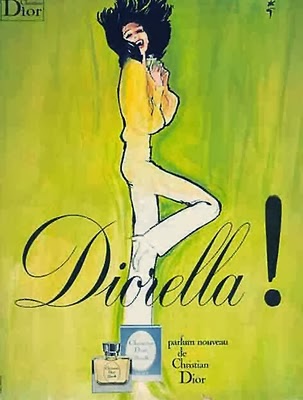 Before I begin, I have two announcements to make: First of all, I want to thank the generous Joanna for sharing a decant of vintage Diorella with me. This review is based on my subsequent wearings of this beautiful rendition, prior to the oakmoss banning days. My second confession is that some ten or so years ago, when Diorella was quite widely available (and before oakmoss was so ridiculously restricted) and it did not quite capture my heart. While I liked its freshness and similarity to the brilliant Eau Sauvage, here was something about it that I disliked - a combination of the heaady floral note of honeysuckle, and the soapy aldehydes at the opening. Time perhaps has been kind with Diorella, because she has aged gracefully. Or perhaps it is an even earlier formulation of the same one. But it is certainly different from the scrubbed and lathered version you’ll find on the Dior counters nowadays.

Way before its time, Roudnitska was at ease incorporating fruit salad elements in his fragrances in a most refreshing, light-weight manner... created in 1972, Roudnitska’s fruit has thankfully no affinity with the syrupy, unbearably sweet fruity-gourmand florals of the new millenia; but rather posessed a cheerful lightness paired with complex substance from more earthy and floral notes of natural raw materials. So again, these are far superior to the light, watery fruity-florals of the 90‘s, though these were strongly influenced by the asthetics that Roudnitska developed with the creation of Eau Sauvage, which introduced the concept of space and expansion to modern perfumery.

Diorella is munching on a honeydew melon (or is it a cantaloupe?). It is ripe, juicy yet somehow still crisp, as it is brilliantly paired with citrusy notes of lemon and bergamot and a touch of spicy-sweet green basil. Her peach-toned skin emanates a scent that is similar to white peach’s delicate, milky and slightly nutty aroma, due to the use of peach aldehyde and peach lactone. These unique fruity notes were both brilliantly used in a non-edible way (as Edmound Roudnitska explains beautifully in Michael Edward’s book, Perfume Legends - French Feminine Fragrances). Rather, it brings freshness and a unique texture to the jus. It is brilliantly paired with effervescent, ethereal and soapy honeysuckle, crushed basil leaves and a tad of the oily aldehydic notes backed with ionones, that simultaneously give the clean impression of triple-milled soap, and the dirty allusion to hosiery that’s been worn and sweated in for at least half a day. That dichotomy between anti-bacterial herbs and animal/human secretion seems to be at the core of Diorella.

The oily aldheyde and peach notes fades rather quickly, allowing the basil and citrus notes more breathing room. Orris butter is present yet very subtle, giving a soft-focus background to the composition, and making it somehow smell more feminine. What truly moves to the forefront is jasmine. Pure, unadulterated, indole-rich jasmine at its best. And it is that indole that will accompany Diorella throughout her strut on the skin and the surrounding air - first an ethereal jasmine, and later on a full, unabridged indolic jasmine, with its fruity, jammy peach-like and earthy and animalic character beautifully showcasing this gorgeous phenomenon. The similarity to Le Parfum de Thérèse as well as Eau Sauvage are striking; but what surprised me what the affinity I discovered with Eau d’Hermes. Also a perfume that is all about jasmine, yet from a very different point of view - more warm, sweet-earthy and spicy. It is probably the juxtaposition of jasmine with ionones that creates that olfactory connection for me.

Last but not least, it’s time to talk about the base notes, the foundation of Diorella. No matter how much Roudnitska denies any connection to Eau Sauvage, the similarity is striking, despite the differences. There is definitely oakmoss, but not nearly as much as in Eau Sauvage, which gives it more of a green, dry and woody character rather than a dense, brown-earthy and musky feel. Vetiver also supports it in this direction. Even the patchouli, which appears in both, seems to be toned down and instead of the big-warm-oily patchouli hug you get in some feminine Chypres such as Miss Dior - there is just a single brush stroke of it, done in aquarelle. Last but not least, where Eau Sauvage has a generous dose of hay, which gives it an almost-fougere quality, Diorella has a subtle sprinkle of tonka bean (or perhaps just pure synthetic coumarin - in reality there is a very small difference between the two), giving it a slightly bitter finish, but with that feminine soft-focus that reflects the orris from earlier on.

Diorella is a very Mediterranean perfume, and truly reminds me of Grasse and the surrounding area, including the perfumer’s home and garden (which I visited in 2009). It also reminds me of a perfume that his son, Michel Roudnitska created way into the future - Eau Emotionelle - also playing on the cantaloupe-jasmine-ionone theme, but in oil-pain strokes rather than the sheer aquarelle of his father's. The culture in that area is greatly influenced by Italy and Spain, and there is something very Italian about it, especially in the opening notes. If Diorella was a woman, she would be one with a very outgoing, young spirit. A woman that loves to laugh and enjoy life’s pleasures, and just goes with the flow - but isn’t audacious or dominant by any means, and is very kind, generous and open but without ever being vulgar in the least. There is something truly carefree, open, fun, bursting with life and joie de vivre about it. In case you didn’t know already - it’s a true masterpiece. It has been relatively recently re-introduced along with the other classic retro Dior-fumes: Diorling, Dioressence, Diorama... I’m sure the new version pales in comparison but I’m nevertheless intrigued to find out what they’ve done to it to overcome the restrictions on jasmine levels and the industry’s new (low) standard of avoiding oakmoss at all costs (even though it is still allowed - the washed-down version of atranol-free absolute, and at only very low percentage).