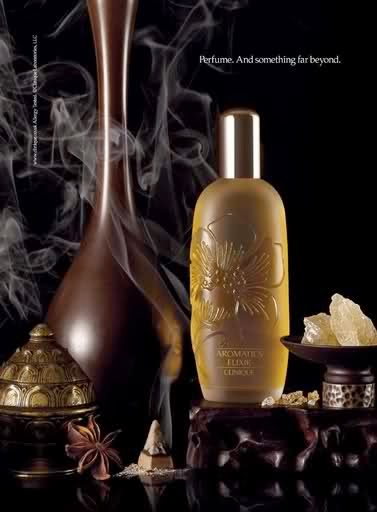 From time to time, revisiting a perfume that I didn't quite connect with right away proves to be a worthy endeavor. Aromatics Elixir is case in point: a perfume that I sought out on the recommendation of a customer, and found to be quite impossible to handle. That was probably sometime in 2003. I found it overbearing, medicinal, over-the-top herbacous and densely earthy; the type of perfume that when a student shows me something similar I would dismiss as "muddy".  And I won't even tell you how many times a similar mud-brew came under my own hands before I thought I knew better... So the mudiness was not anything new to me, in case you wondered; only that in Aromatics Elixir case, the sillage was amplified beyond control, bringing to mind Nigel's nifty amplifier that goes up to 11; and as he stated in a later interview in the mockumantary This Is Spinal Tap, "you want more loudness, you want more damage".

I eventually warmed up to the idea of Aromatics Elixir with their limited edition Aromatics Elixir Velvet Sheer (2006). Partly because of the bottle, which has a dabber, so even if the scent is still strong - the discreet application tones it down. Coming across another limited edition from 2011 that was created to celebrate the perfume's 40th birthday, titled Aromatics Elixir Perfumer's Reserve (which I'm determined to track down and review as well) peaked my interest in this fragrance again. So here I am revisiting the big bombshell from the 70's; and as it turned out - it really does go beyond.

While still having the earthy and medicinal qualities I remember, there is more of a spicy oriental quality to Aromatics Elixir than I recalled. It opens with very resinous, almost smoky and medicinal notes, vetiver and myrrh being the most dominant.

Aromatics Elixir knocks you down first with a thick veil of smoke, sweaty spices (coriander) and pungent herbs (sage). Than it just works its magic on you, with soothing aromatic oils that are known for their aroma-therapeutic calming effects and beautifying qualities (as Grain de Musc points out, citing the first ad copy for this perfume). Roman chamomile initially calms the nerves, geranium leaf energizes and tones the skin, and mingled with soothing rose; yet the juxtaposition with contrasting bitter-resinous analgesic myrrh and groovy patchouli it creates a mysterious fruity-mushroomy effect.

Once this subsides, the smokiness of vetiver comes in (it smellls like a rich, woody-nutty Bourbon vetiver), which goes hand-in-hand with clean, masculine sandalwood and musk. There is a dry, woody, diffusive appeal to this triad. And it makes a perfect foundation for the spacious yet erogenous jasmine that is at the core of Aromatics Elixir. With the addition of orange blossom and ylang ylang's ability to soothe anxiety and lifts the spirit, Aromatics Elixir walks a very fine line between a medicinal brew and a love potion. Furthermore, it has such a unique composition, which is very base-heavy, non-compromising and yet beautiful in a non-pretentious kind of way.