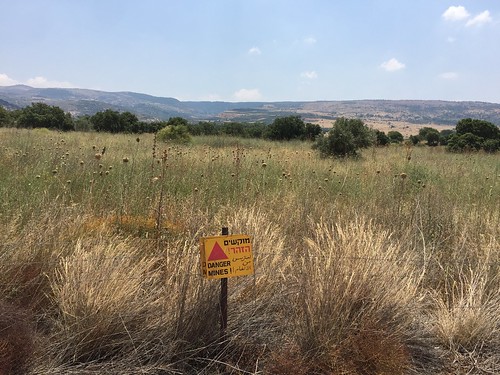 When arriving in the arid, volcanic and mine-dotted land of the Golan Heights, it is hard to imagine that within it hides some of the most luxurious water resources of the country. 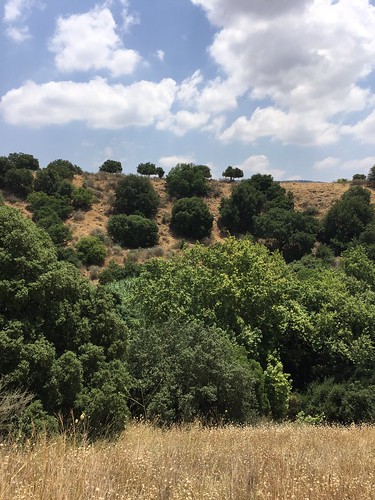 The strip of lush green in the midst of dead, dry grasses is in fact the creekside forest of the Banias creek. It is named after the Greek goat-god, Pan (Arabic does not have the letter "P" so it was replaced over the years with a "B" and stayed that way) , and the city of Panias that dwelled around its springs at the foothill of Mount Hermon (all the snow that melts penetrates the earth and comes out of these springs, and some others, into three creeks - Haztbani, Banias and Dan, which later joint forces to become the Joradn river). And inside that greenery hide sites such as this lovely waterfall: 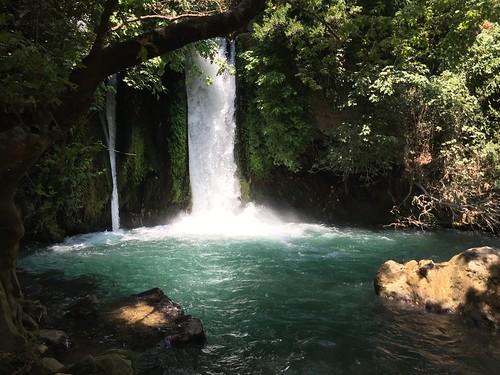 We took two separate hikes, one to the Banias Fall (seen above) and another to the Banias Springs and the Temple of Pan. In contrast to the heat and dryness above the creek's canyon, it is hard to imagine a more befitting place for worshipping the green god Pan. You truly can feel the presence of the life force running through the creek, and even eighteen years in water-rich BC does not taint the wonder at such sight. The vegetation is spectacular, and includes side by side fig trees and Syrian maples, carobs, oaks and even ferns that grow alongside the pebbled creek and on the waterfall's rocks. There is a hanging trail there for part of the hike as well. And one more interesting point is a colony of rock hyrax that not only saw from up-close, but also smelled their dungy droppings - a mixture of civet, castoreum and maybe even a little bit of funky smell of goat droppings... you can see one of these creatures (a youngster) hiding among the carob tree's nooks and crannies, in the photo below. It looks a little bit like a squirrel because it is so blurry - but it does not have the typical long tail. Or any tail at all, for that matter. 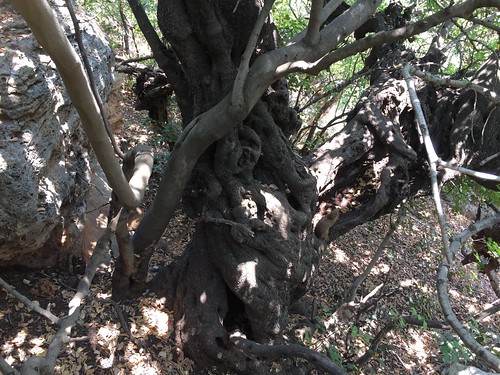 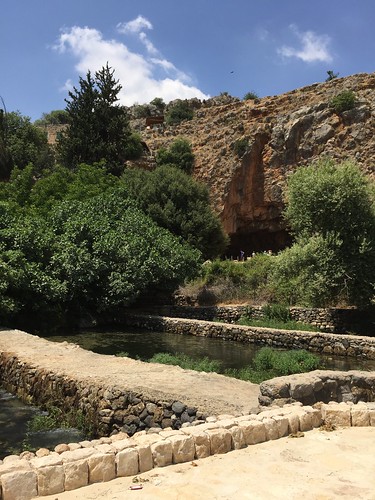 Our second hike began at the springs of the Panias and the sacred area of the Temple of Pan which in fact are the ruins of three ancient Greek temples that were the core of the city of Panias): One for Pan, which is in the cave you can see in the photo of the springs, to which goats were sent as sacrifice, to ask Pan to bless the livestocks with fertility and health. Goats that disappeared in the river were considered to be received; those who left traces of blood were signs for trouble and prayers that were not accepted. Next to it was a temple for Zeus. And on the very far right - the temple and gravesite for the dancing holy goats. I am assuming these are the ones that were received as sacrifice. There are many other sites and remains along the Banias creek, namely a Druze prophet's graveyard at the top of the cave for Pan (Nabi Khader, which is their name for the prophet Eliyahu AKA Elijah), Agripas' palace, an old flour mill (operated by the creek), a synagogue, and more. The caves below formerly had statues of Pan and other gods and goddesses. 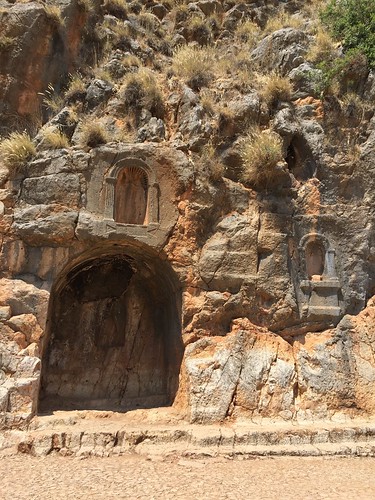 I was overjoyed by the wonderful smell of fig leaves, so green, fresh and slightly milky. The true scent characteristics of any watery area in Israel. And also there were maple trees, some reaching giant proportions, with many impressive hollows and hiding places. Fig leaves and cool creek's pebbles are a classic scent combination, made entirely by nature... I wish I could bottle that! 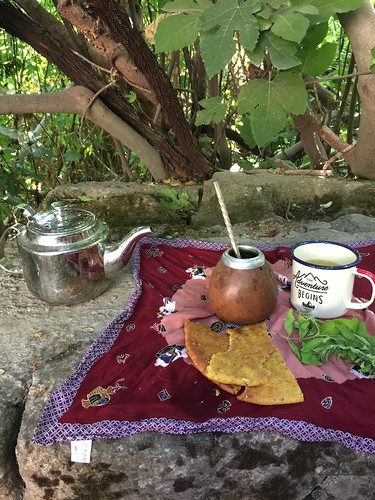 As we walked towards the old mill and Agripas' palace, we found a cool, shady spot to brew a cup of tea. And speaking of classic combinations: I brewed lemon verbena tea, and poured the concoction into my gourd to make a truly South American mate. Lemon verbena (Aloysia citriodora) also originates in Argentina. We enjoyed it with some halva and ka'akat isfar which I will tell you more about at a later post. My only regret is not having more cups and not inviting the American tourists that sat next to us to catch their breath. Something to think about for party.
Back to the top