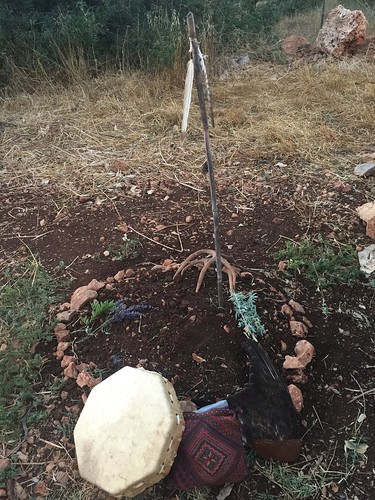 Before a journey, there is preparation. And ours, though not stretching very far (we were set to go to Mount Hermon the next day) - had a purpose of cleansing and freeing one's mind from past heartbreak - I felt a strong urge to join a sweat lodge in the neighbouring community, on the way to Jath, called Adama.

It is strange that in all my years in Canada I never entered a sweat lodge, and even stranger that my first one would be lead by someone who is not from the First Nations. But I had a good feeling about the lady leading the ceremony. She learned the traditions from teachers in the Sierra Nevada, and so the plants were very different from those I'm familiar with from the West Coast that were burnt in some ceremonies I've attended. Cedar from the Sierra Nevada mountains is a completely different tree than the redcedar I learned to associate with the West Coast incense. There were also copious amounts of copal, both white and black and at times mingled with rose, that were burnt on the hot lava rocks. We were so close to the earth, and our hearts, and the very centre of the earth. We were a group of (mostly) strangers, yet felt so together and supported, safe and connected.

It's hard to explain the process of a sweat lodge. It is all very physical, yet at the same time works so deeply on the emotional, psychic and spiritual level. It was very challenging for me to take part in it - I hate to sweat, and I suffer from heat more than most people. But it was exactly the healing, cleansing and purifying thing I had to experience at that point in time. Coming out of it was almost like being reborn into the fresh air again, with new lungs and a new heart.
Back to the top