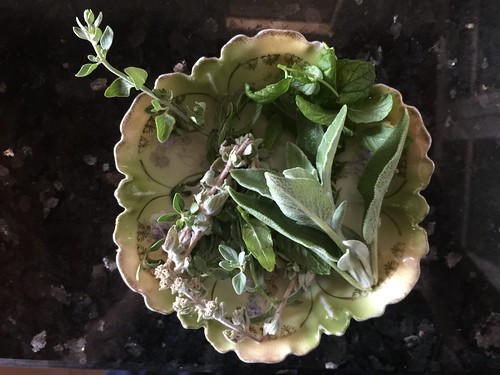 For those unfamiliar with the Druze culture, it is unique to the Levant (Lebanon, Syria and Israel). This minority group originated about a thousand years ago in the Ismaillia sect of early Islam, and was largely prosecuted after splitting off from it. Therefore, mate

they usually dwell on mountains and have long tradition of bravery since they've always needed to fend for themselves in a rather hostile environment. In Israel, the Druze communities are all located in the north - from Mount Carmel in the largest Druze town Daliat el Carmel and all the way up north to the Western Galilee, the Golan Heights especially around Mount Hermon.

Near my village alone there are four Druze villages - Jath, Yanuh, Yirka and Julis. We've held strong friendly relationships with our Druze neighbours. Growing up, two elders from the village Yanuh will travel on foot or by donkey and come help us build our village - they taught our parents how to built terraces from the many rocks around here so that we can grow crops along the hillsides, how to cultivate wild olives and do the grafting so the trees grow strong and bear good fruit, and we went every summer to the miller and grind our wheat (when we still grew our own), and every autumn to line up with all the other olive growers and press our olives into fine olive oil and buy handmade olive soap that was made on the spot from the pommace left from the pressing process. As the nearby village Yirka developed into a small town bustling with businesses - we go there also to do most of our shopping and other business (that's where I usually go to the ship my online orders, by the way), and continue to build business and work relations with our neighbours. My house (both the old and the new part) was built almost entirely by a Birka-Born team of construction experts who became my closest new friends since moving here, and their wives come to practice Pilates with me.

Growing up here, I remember my mom being especially enthusiastic about learning from the Druze women about the bounty of edible and medicinal wild plants around here. From them she also learned to drink olive oil in the morning on empty stomach, and how to make a special scorpion antidote (from the scorpion that stung you, fried in olive oil). I never tried either, and probably never will. But I do love to learn from them about the nearly magical properties of the plants that grow everywhere around here. It's as if there is an entire pharmacy out in the open, here in the wild.

Besides, there is much to be learned from the Druze traditional way of living, which is very family centred and values hospitality and taking the time to sit and enjoy a cup of anything - tea, coffee, and more and more coffee. The latter is served everywhere you go - from the hardware store to the mobile phone shop. And of course you can't enter a home without being invited for at least a cup of coffee, and if it's dinnertime - to break bread with the whole family. 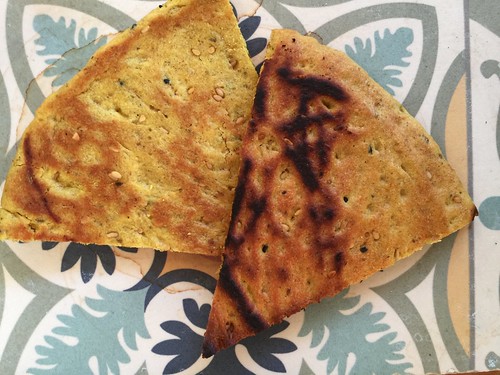 As is widespread in all of Israel - among both the Arab and Jewish population - the Druze adore za'atar, sage and the many wild harvested and then dried herbs from around here. They are  popular as digestifs or medicinal brews for various ailments or as preventative measures: wild sage, white mint, savory, wild oregano, and more are either infused on their own or added, dried or fresh, to black tea.  The love for za'atar is so profound that it is even added to some sweet pastries, such as this traditional ka'akat isfar ("yellow cake") - a mildly sweet yeasted flatbread that is coloured with turmeric and additionally spiced with sesame and nigella seeds, hints of za'atar (this umbrella name could be wild oregano, savoury or thyme - more on that in another post), and hints of mysterious spices that I'm yet to identify (I detected nutmeg and perhaps even some cardamom or allspice but I can't be sure of the latter two). It has become a favourite of mine, but is never found in a pastry shop. Some families would sell their traditional homemade ka'kat isfar when they make it, and the recipes vary. The first one I tried was only spiced with turmeric. This particular version that I'm very fond of was made by a random person I met on one of my traveling tea parties, and I doubt I will be able to taste ever again. The only recipe I found that seems close is written in Arabic and I'm far from being proficient enough to follow a recipe in that language.

Many of my Vancouver perfume studio guests have been indirectly introduced to Druze culture through the special tea I would brew each winter (we fondly called it "witch brew") of dried hulnejan (a particular type of dried galangal root) and ginger roots, which is simmered forever in a large pot, simultaneously cleansing the air, warming the chest and keeping colds at bay. It is often served with pecan nuts sprinkled on top, and a lot of sugar, which is how most Druze like their teas. I personally prefer it unsweetened, and like to add cinnamon bark which has its own natural sweetness. Sometimes I would add honey but not often.

But Hulnejan is not the only interesting thing about the Druze tea culture. As it turns out, in the 19th Century, many Druze - especially from Syria - left for Argentina, and they brought back with them mate, and a special fondness for this unique South American concoction. They drink it socially, sharing the same bombilla (the silver straw), traditionally sucked from the tea which is brewed in a dried decorative gourd. 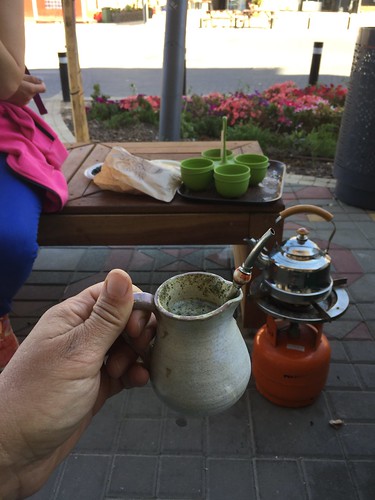 In this photo, I am holding a dainty cup of mate that was offered to me on the streets of Majdal Shams, a remote Druze village come ski tourist town on Mount Hermon (Jabal Sheikh), formerly part of Syria.

On Saturday morning, we were having a hard time finding a place to eat breakfast. The breakfast place recommended to us the night before was still closed at 8:30am - it turns out it was them who had the wedding the night before with the parade that blocked the streets) - and so we were directed by a local lady to a corner shop that sells coffee, cigarettes, local cherries and freshly whipped before your eyes malyukh (Druze flat bread that is baked on top of a saj - an iron dome much like an upside down wok) on top of open fire. The bread is baked only on one side, than folded and smeared with generous amounts of labneh (soft cheese made from strained yoghurt), za'atar mixture, and homemade hot sauce that I swear was spiked with cinnamon.  We were also offered black tea "on the house" which turned to be fragrant with "Ootra" - Arabic for the popular Pelargonium graveness. The lady was impressed with my Arabic (very basic, but still better than nothing) and even more so that I recognized what she put in the tea and know the Arabic name for it.

I chatted her up as I was munching on the malyukh and sipping the tea, and learned that while Majdal Shams is not as big as Yirka - it is a lot more "modern" to her words. There is a high percentage of post-secondary education, most of which was acquired in Syria, where up until the civil war was offered for free to all Syrian citizens. As a background - you should know that up until 1967, the Golan Heights and Mt. Hermon, including the four Druze villages  there - Majdal Shams, Mas'ade, Ein Kiniya and Buq'ata - were under Syrian rule, and their culture is quite different than what you'll find in the Galilee. One thinks of the border between Israel and Syria (sworn enemies since the establishment of the state of Israeli in 1948) as hermetically sealed, but in fact there was a dynamic flow of the Druze population between the countries - especially for weddings and for family reunions, but also for studying abroad. This lady's brother lived in Syria for many years - he went there to study medicine, got married and lived there until the war started, and then requested to return, and came back to Israel via Jordan with his wife and their children.

We finished our delicious breakfast, thanked the lady and crossed the street to where our car was parked, right in front of a bakery (the only other place that was already open by 9am). In front of it, two ladies sat on a bench and a couple of upside-down plastic grocery boxes, boiling water on a portable gas stove and sipping non other than mate from a dainty little jug. I was so astonished I could not hold my gasp of delight. In return, they offered me to sit down and join them, rinsing the bombilla with boiled water from the kettle and pouring fresh water over and over the mate to bring out the flavour time and again. I was so thrilled that even though we're only two hours drive from home, and are already experiencing new culture that is so different yet invites us to share a cup of tea together.
I had a couple of jugs of mate with them and thanked the big spirit that's in this world that encouraged me to finally set up on my tea journey.
Back to the top