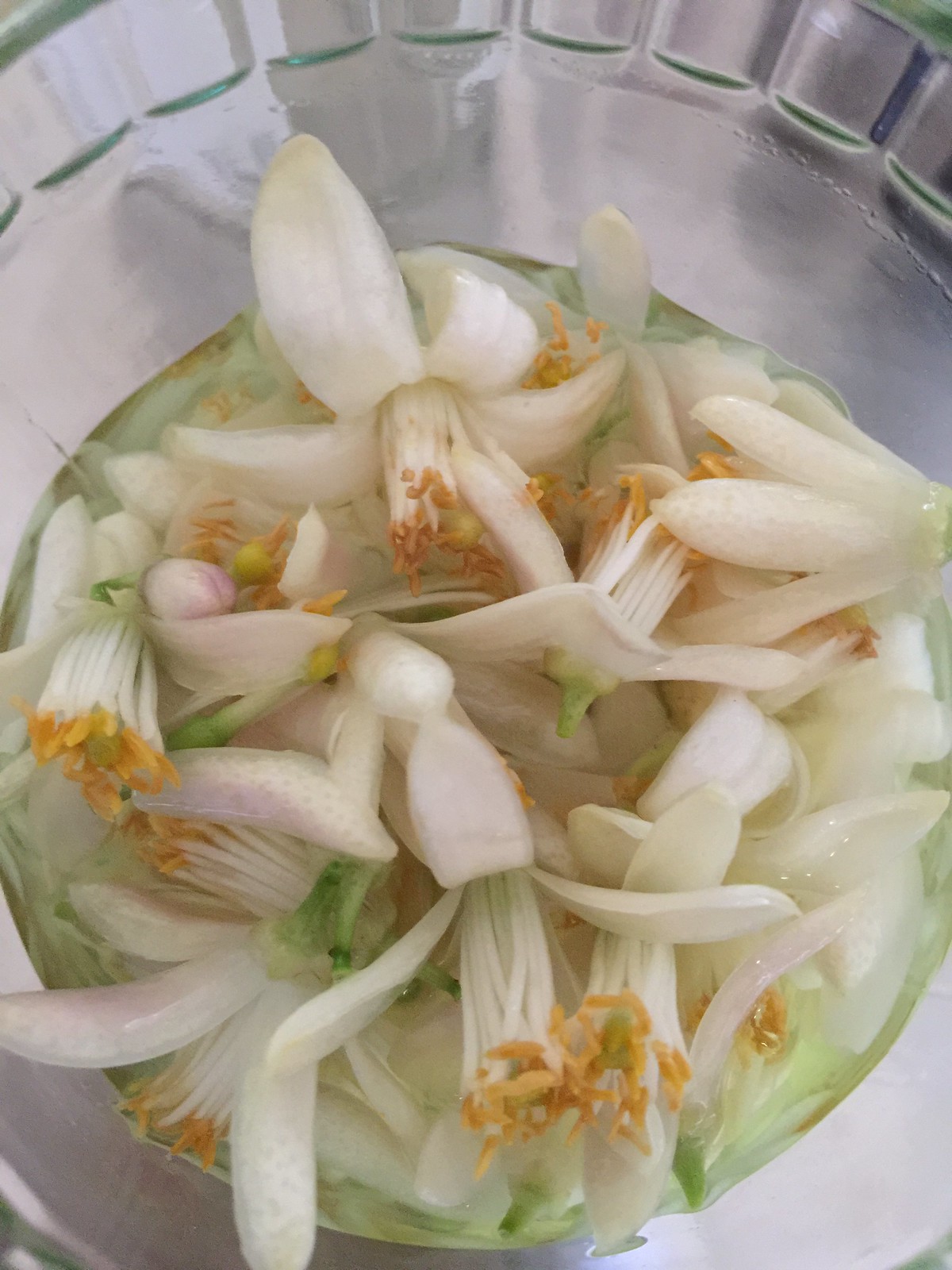 Often I'm asked if it is possible to make orange blossoms tincture. My snarky response is that you can tincture anything. Can't guarantee the results though... Fresh flowers, generally speaking, don't let themselves well to alcoholic tincturing. That is why enfleurage and solvent extraction techniques were invented in the first place. Otherwise why bother with such sophisticated process if it is possible to make such an easy homemade extraction with alcohol?
There are a few problems at play. One is the water content in the flowers. Once the flowers sit in the alcohol, it dries them up completely, which means it sucks all the moisture out of them. That's what alcohol does. It readily bonds with the water. This dilutes the alcohol's solvent powers.
The other problem is that the alcohol dissolves also less desirable aspects of the plant matter, resulting in a very vegetal smelling tincture. It may be fine for medicinal purposes (which is the the main objective of most fresh plant matter tinctures). For fine perfumery - not so much. 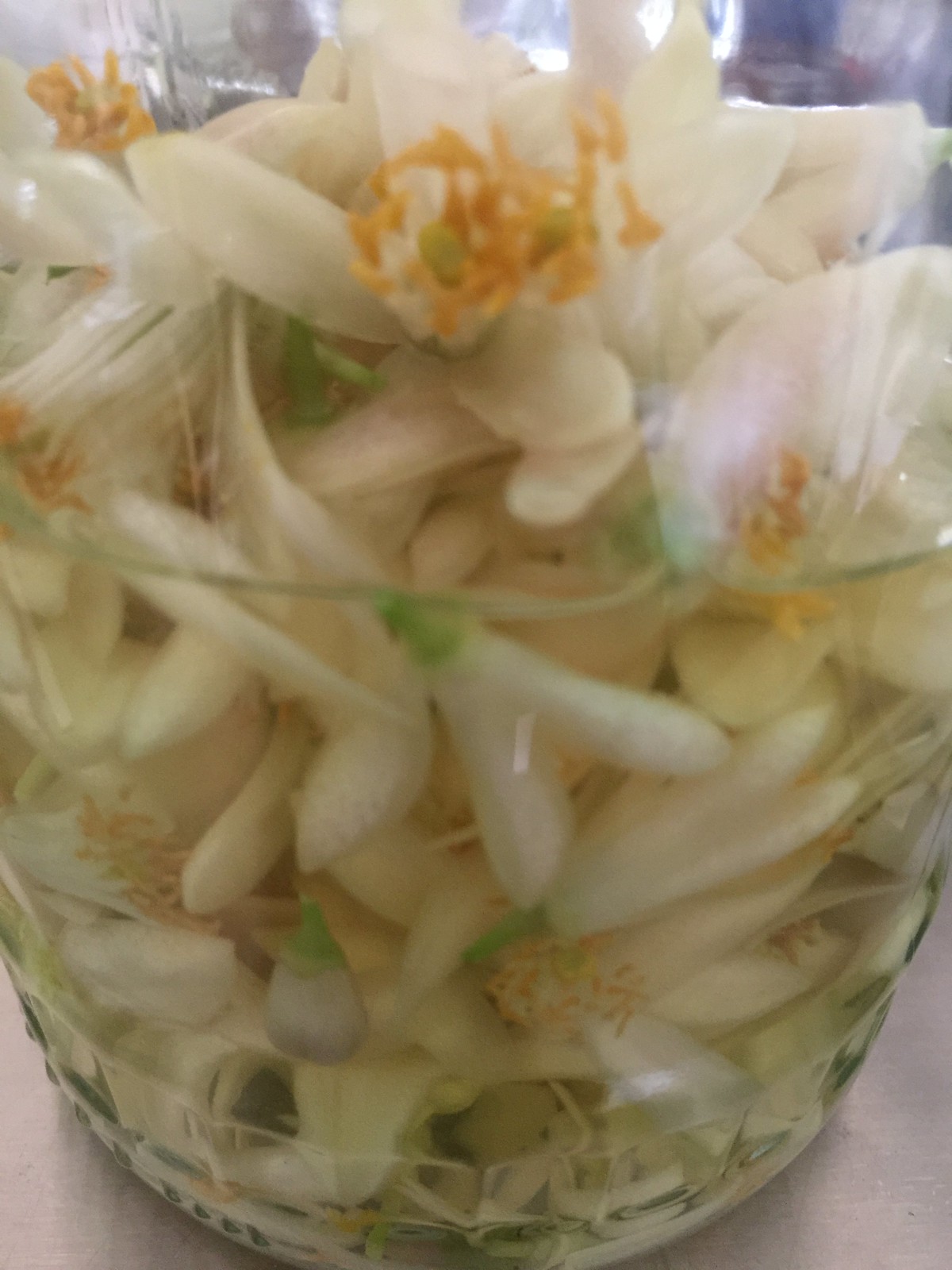 Either way, one needs to watch out for over-steeping when preparing tinctures. Less is often more. Meaning, it is better to recharge the alcohol several times with the flowers until the desired odour strength is achieved. This is akin to steeping tea: Steeping the same amount of tea over a longer period of time will definitely give you a stronger tea, but not as fragrant and delicious as one that you've paid attention to preparing according to the appropriate steeping time and amount of tea leaf. When wishing you prepare a stronger tea, there is no way around using more tea. This is not the time or place to be thrifty with your raw materials. Remember the time and effort taken to grow, harvest, clean and infuse your plants. Remember how much you paid for that 96% alcohol. Don't waste these resources.
So, with all that being said, the neroli tincture (bitter orange blossoms steeped in alcohol) smelled nice enough. I was smart enough to strain it before turning vegetable. It wears ok on the skin. But needs another recharge or two. In my opinion, aside from the cache of using something from my own orchard in my perfume, it does not offer anything more than what my high quality neroli oil and orange blossom absolutes have to offer. But we shall see once I use it within a composition. I will include some in my upcoming batch of Zohar (my orange blossom soliflore). Maybe it will transform into something more WOW inducing then. Either way, the process was fun. But I a more inclined to stick to traditional raw materials with these flowers and get a still ASAP to make my own orchard hydrosoles and perhaps even oils some day soon. 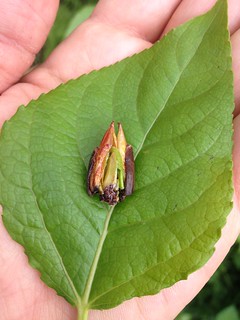 In the wake of the northern spring, the world comes to life in different stages. Some trees burst with flowers long ago and are now in the decaying stages that lead to seed. Others are in the peak of their bloom. And some are still seemingly dead.

As you pass near lifeless-looking trees, a surprising smell may penetrate your nose: the scent of vanilla, resin and honey. Although it's all-around cuddly and cozy, there is also something sharp and green about it, that pierces through the nostrils like blades of grass. To the uninitiated, this smell, coming out of nowhere, is a complete mystery. To those in the know, this heavenly scent is a comforting, familiar reminder of the resurrection of black cottonwood buds, which will soon be covered with handsome, shiny green leaves, and will continue to manage this sweet scent for the months of summer.

Each bud is reddish brown, reminiscent of an insect, and green on the inside, drenched in sticky, drippy reddish-orange resin that is reminds me of propolis and pollen simultaneously. Herbalists prepare an infusion of these buds that has healing properties for muscle pains and skin ailments. I like it just for the scent, so I tincture them in alcohol (you can find this note in Komorebi). 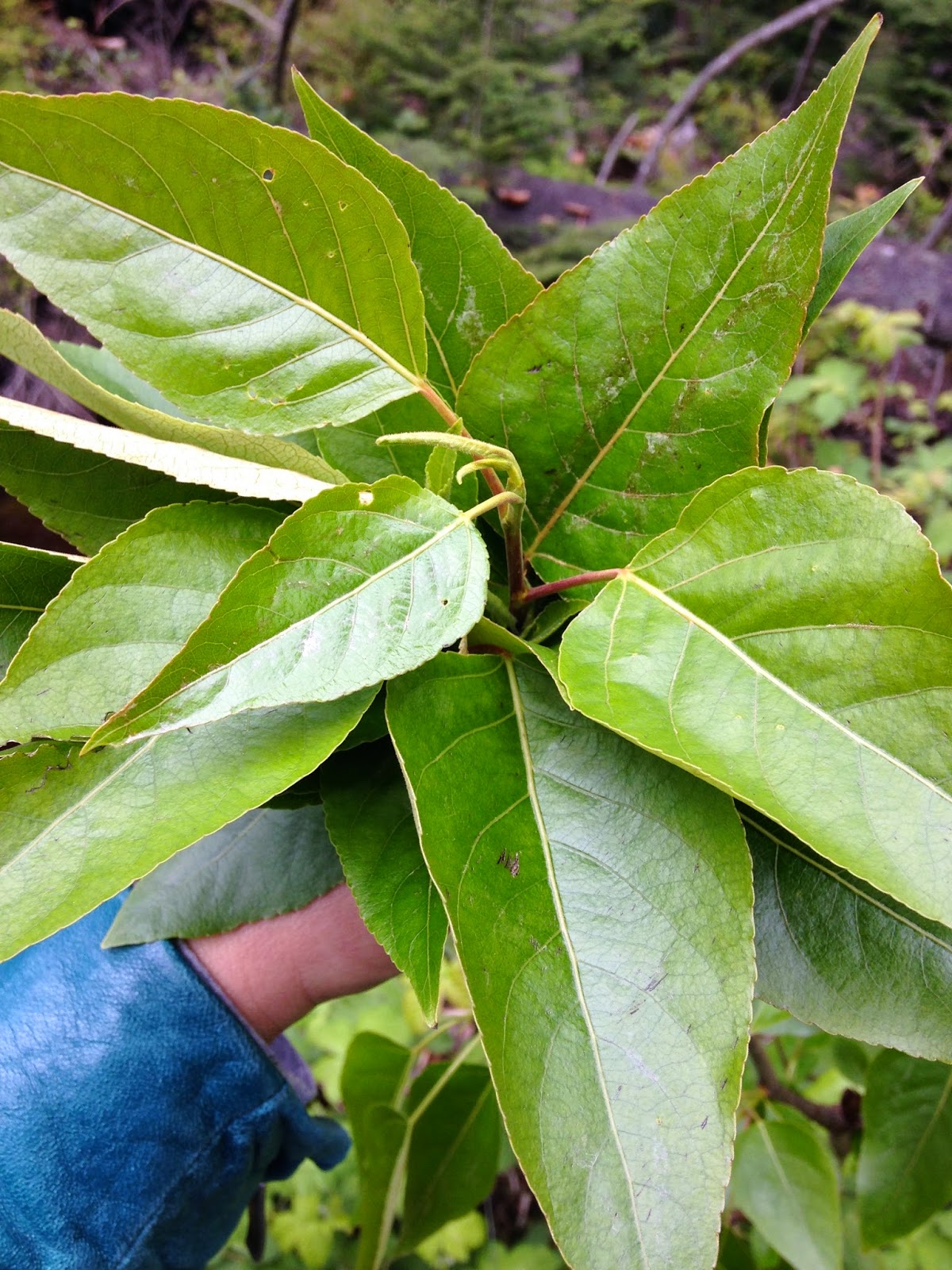 Mystery tree that gives off a sweet, balsamic fragrance reminiscent of vanilla, cured tobacco and labdanum. It took me as long as several years to identify the source of this heavenly, unmistakable smell... It is hidden, because it comes not from flowers, but from the resin surrounding the budding leaves, which first appear in spring on the completely barren trees. Sources of smell are varied and many, and somehow, even though black current buds are a known fragrance material, it just did not occur to me that this sweet smell is coming from yet to be opened buds. 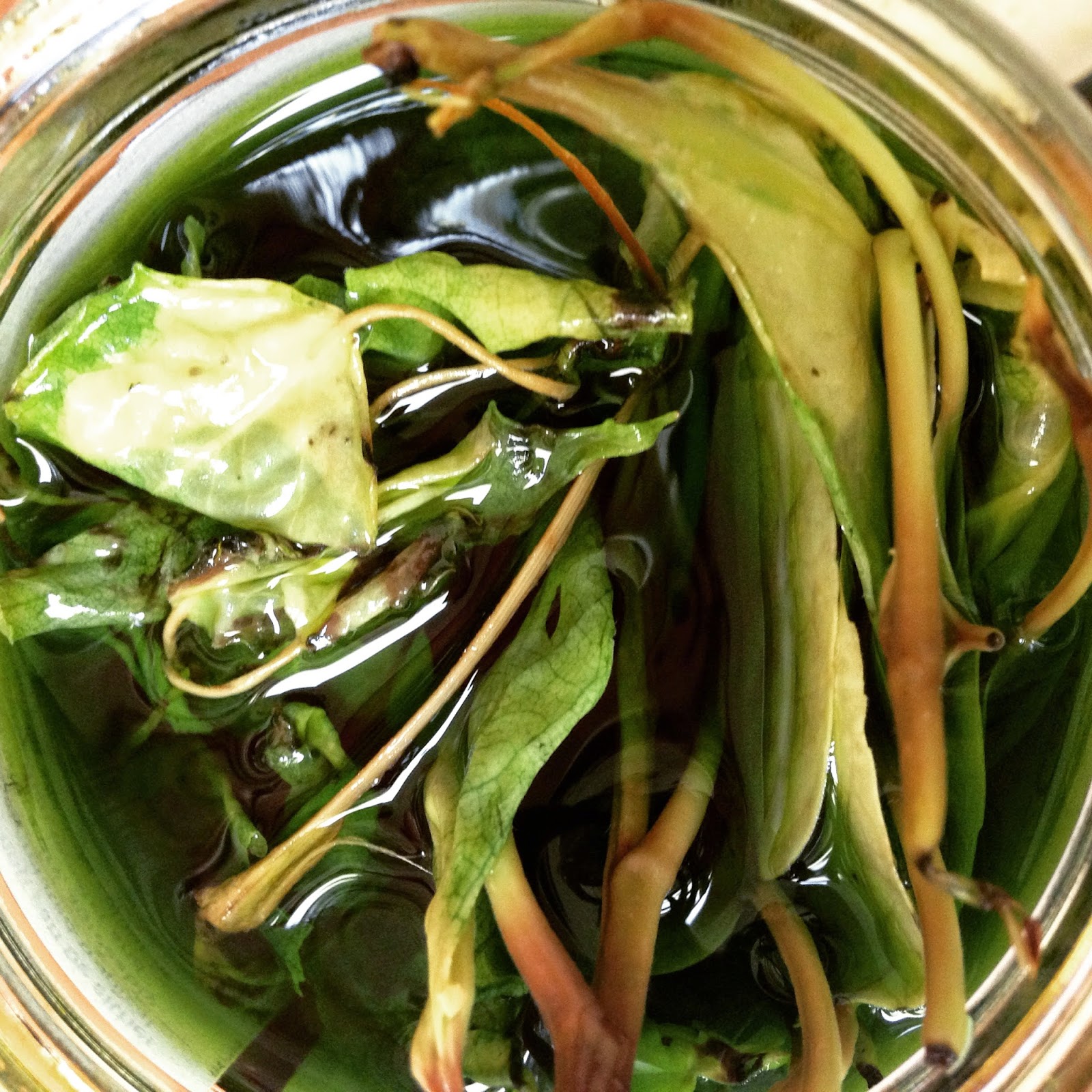 An attempt at tincturing the fragrant new leaves. 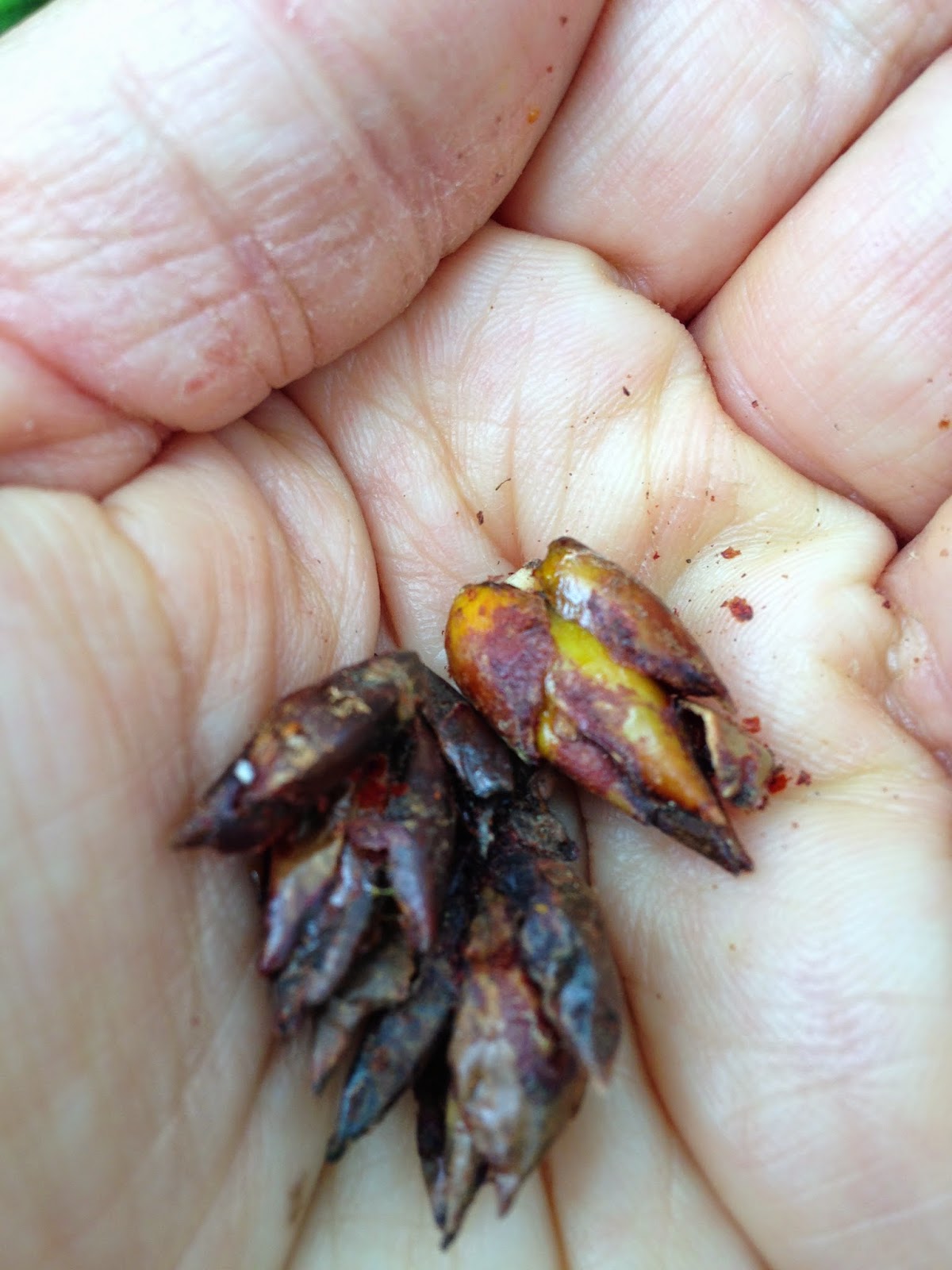 I've been tincturing my milky oolong tea in the past couple of weeks, with mixed-success results.
There is no doubt the jus that results from this botanical is fragrant. But at first it smells like some sort of a witch's brew (and as you can see, the colour is quite reassuring in this direction), and only improves after sitting on a scent strip for a few minutes.
The true test for it, of course, is skin and perfume. On the skin I'm not really impressed with it on its own (yet). But I have added a few drops to an existing perfume that was begging for a cup of tea, and it seems to add some depth...
The interesting part is, though, that the one10 days in ethanol did not seem to take everything out of the leaf. So I'm doing a 2nd "steeping" and curious to see if there will be an improvement. Citrus is not widely associated with autumn. Except for the Etrog fruit, being a symbolic fruit during Sukkot, a Jewish fall harvest holiday. For me personally, growing in the land of citrus groves, autumn is the season of the return of citrus: the first tangerines, usually unripe, or at least green from the outside even if already juicy and sweet on the interior, are packed for the 10 o'clock snack during recess when the school begins, and the fine mist of the essential oil exploding out of the peel fills the classrooms for a refreshing aroma. It blends quite well with the cedar pencil shaving and new books' smell, come to think of it...

And of course, Etrog has a really special scent, and at times, the fruit will be brought to school for students to study and explore in the early fall. The citrus scents somehow become part of the smells of excitement: new beginnings, transition, new schools, new friends, new teachers, new backpacks (which quickly become contaminated with the stale odour of citrus fruit that was forgotten in the back for the entire week). And for me personally - another scent-memory was added to fall: the birth of my daughter (she will turn 14 years old this October!). When creating her namesake Tamya perfume, which commemorated a magic moment after her arrival back home from the hospital. It was just before sunset in the fall, and everything had that golden glow of a soft autumn sun, shining through olive groves, new wild wheat-grass after the first rain. I used yuzu, a rare Japanese citron essential oil, to give the perfume its uber-citrusy and fruity pizazz, reminiscent of the first autumn fruit that I'm so fond of.

I've been tincturing special citrus this week: Etrog, which received its own post last year; and Meyer lemons, which you can see in the above photo, and I'm tincturing for a whole other project: my New Orleans perfume (more about that later, once I complete my 4th mod).

Meyer lemons are strange fruit, as their name and shape is deceiving: their outer peel is the most fragrant and is reminiscent of yellow mandarins or the first tangerines that I've mentioned earlier. It is really quite heavenly experience to zest or peel this deep yellow fruit!

The pulp, however, takes a disappointing turn. I cannot for the life of me figure out how to use my Meyer lemons after I've peeled them off... They are too sweet for a salad dressing (though can be used in a pinch...) and a little too bland to be eaten as they are. I'm wondering if their personality might shine the most in a marmalade. but having lost the zest, I probably can't use them for that at this point... I'm sure they are full of vitamin C though, so I promise they won't got to waste. However, if you have a good Meyer lemon recipe or idea, I'd be thrilled to hear.

In the meantime, I'm grateful to have a scent that vaguely reminds me of the early tangerines in our family orchard. And I'm really looking forward to finalizing my New Orleans perfume using this precious tincture, which will be ready in exactly 3 days. So stay tuned...