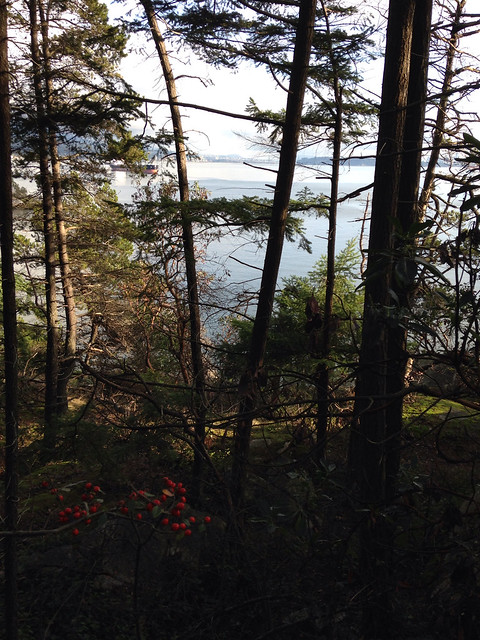 Our evening walk in the woods turned into a little thunderstorm adventure. After many dry days and static humid air, the thunder started roaring and gotten nearer and nearer. The rain began to drop gently, tapping on a leaf here and there, and then tap-tap-tap it went on, chasing us from the forest back home and even though we ran part of the way, we got soaked to the socks.

Thunderstorms are a rare occurrence on the West Coast, and it always reminds me of home, because even though the smells are different -  there is always the excitement of the noise and the bolts of lightning. And there is still something familiar, even though the petrichor here was wrapped in luscious smells of salmon berries and blackberry leaves as we were meandering through the forest; and the wet earth mingled with the smell of white roses and the last indolic rhododendrons in the garden... And then the smell of wet pavement and concrete, wet hair and breathless warm skin of a child as we ran all the way home from the park. Strange as this may sounds, to me this smells like a prelude to a summer.

Inspired by a hidden garden of azaleas 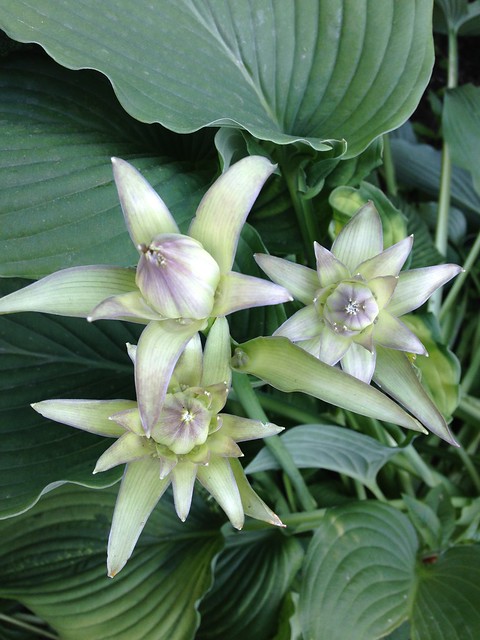 Happy May Day!
I'm excited to share with you my new perfume for spring and summer: Lost Lagoon.

Every spring, the rhododendrons awaken - first slowly, building anticipation. By early May, they simply burst with colour and aroma, some of the bushes so dense with flowers that you can't even see their leaves and branches...

These fragrant azaleas paint the edges of Lost Lagoon with myriads of flowers of tropical colours and exotic scents as versatile as the number of hybrids planted there: some are reminiscent of lily, others are like ylang ylang and some smell like cool suntan lotion. Bluebells, violets and other bulb flowers and annuals are planted among them; and magnolia, lilac and syringa contribute their luscious perfume to the already fragrant air. Freshly cut grass from the Pitch & Putt is the only reminder you're still in the Northern Hemisphere and not in the tropics... 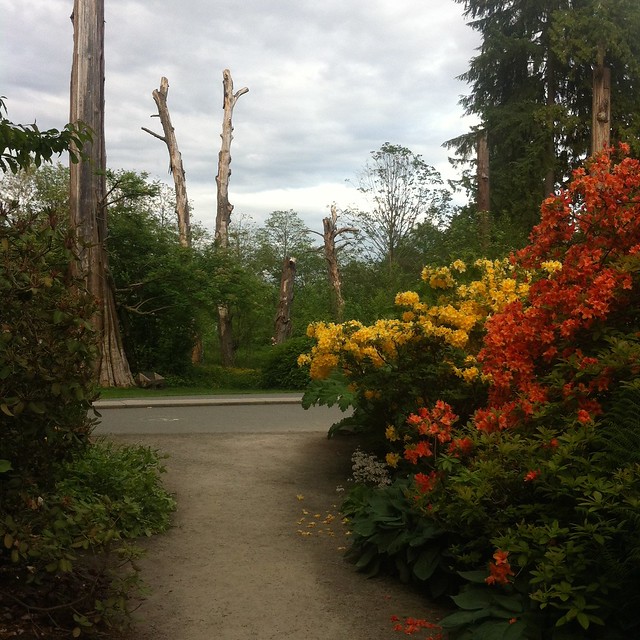 In case you can't experience this extravagant botanical explosion in person - don't be sad: I've bottled that scent especially for you!

Lost Lagoon is the third installation in "Perfume For A Place" series, which is inspired by my favourite places in Vancouver. This perfume will transport you to a secret lagoon surrounded by tropical flowers. Lost Lagoon is a refreshing Chypre with exotic floral notes of magnolia and ylang ylang and loaded with bergamot and green notes of rhododendron buds, violet leaf and galbanum. 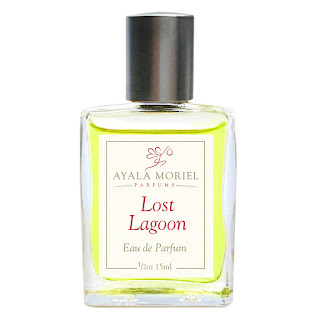 Into the Woods, a photo by Ayala Moriel on Flickr.
The forest is calling me these days. And thankfully it is right at my back yard. The water I frequently visit as it’s my most immediate calling. The proximity to water and all it’s aspects is very soothing: the physical and metaphorical reflection, the lulling sound of the waves’ rhythm... Sometimes competing sounds are complementary, sometimes dissonant: the waves clashing on the rocks, my boots tapping on the seawall at the exact pace of 2 full-circles of the aquaplane’s propellor... I observe, listen, become one with the moist air, the sights and the sounds. And come back feeling cleansed and refreshed.

The forest, on the other hand, calls for digging deeper into the secrets of the soul. It might hold some wonderful surprises, but also some scary ones - encountering fears and demons in the darkness between the branches and amidst the bogs and marshes of the woods.

Circling Beaver Lake this morning, it was inevitable to think about death and decay.
Two runners pass me, providing a temporary comical break: a gay couple with identical pet dogs that although tiny seem to be pulling their respective owners forward with their leashes tied to their belly buttons...

Back to the marshlands though: it’s being sucked dry by invasive waterlilies: foreign beauties that take over the lake and turn it into a blooming garden. Like ornamental dolls, they look prettier and smell nicer than the skunk cabbages, but unfortunately are just nearly useless for the wood ducks, beavers and other wildlife that call this lake their home. If the forest is the place of healing of the planet, the green lungs that reverse CO2 into oxygen - then we must start eradicating the invasive species that threaten it from thriving.

Urban meets nature in every corner I set eyes on here. In the Pacific Northwest it is sometimes hard to say who wins the battle: while logging and concrete are a constant concern for wildlife and natural habitats -- moss and wandering ferns take over my porch without any cultivation attempts, and coyotes roam freely in the city.

The rainforest is a constant source of inspiration to me, not only because of its rich flora and fauna; but also because within it lie so many answers to life’s quest. And the most difficult search is - when you don’t even know what you’re searching for... Thankfully, the forest provides some answers even to that.

Amid the greens and browns, an orange colour pops out: no, it’s not a persimmon that a careless park goer spat out on a log. Nor is a group of lanterns on a distant, dead Douglas fir that is still standing upright. These are the most peculiar, slimy bright orange fungi. You are probably wondering by now what is the point of this post, as I do. There is no point, except for the wonderment of the forest itself. No matter what else I will bring up we will end up on the same intersection as in the many paths and trails that divide and meet again in Stanley Park.