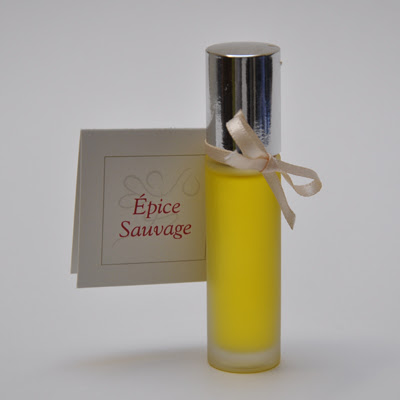 For those of you who are smitten with a particular scent from my collection and prefer the oil formulation - now is the time to stock up with a 10ml roll-on. I'm phasing out this size and have only 19 bottles left. I'm making room for the new spray bottles, and will be only carrying the 5ml bottles from now on. What's online is all I have in stock (and also there are a handful of the last Zodiac Perfumes in 10ml on my Etsy shop).
Similarly, the extrait roll-ons that will be no longer offered - the last three bottles of Immortelle l'Amour, Gaucho and Roses et Chocolat that are online now are the last in stock. Woman from a Hamar tribe sitting on camel..., originally uploaded by Vit Hassan.

Turning now her breast toward her crying babe, She did not move her bottom, pressed beneath me.
Imru’l Qais (d. c. 535)

Gentle and delicate, roses weave in and out like floating silk scarves of mysterious dancers. It dries down to the most beautiful woody powdery dry down, resembling high quality sandalwood incense in a Buddhist temple. Overall, it's a lovely soft woody-floral, with dewy rose playing an important role (not unlike how it is casted for the Al Mesk Abyad). I only wish the rose did not smell so artificial in this one, it really takes away from my enjoyment at first. But after the dry down it is a soft and smooth agarwood and musk for the most part - almost as if the formula is a hybrid between Al Mesk Abyad and Oud Omani.

Anbar, or amber in Arabic, refers to both ambergris and the fossilized resin used as a gemstone whose beads are often used in Masbaha (prayer beaded chains). I got the perfume oil by this name at Majed’s shop, and it is also dark in colour.

Anbar perfume oil is not as animalic as Al Mesk Aswad, but is still fecal, dark, sweet, and has hints of civet. It smells so animalic it may have some ambergris to it. Like Al Mesk Aswad, I smell hints of camphor at first, which smells cool and metallic, with hints of myrrh and benzoin. Most of all, Anbar reminds me of antiques made of dusty copper and brass and of chains of amber Masbaha displayed in abundance in a crowded souk, where fumes of incense weave their way through the abundance of old Persian carpets, coin-decorated belly dancer’s outfits, piles of dusty incense tears, copper lanterns and hookas laid out on the cool, footsteps-polished dusty stone floor.

Photo: Words of Wisdom, by Barbara (overthemoon on Flickr) The sky became curved because of prostration before Muhammad.
The ocean is only a water bubble from Muhammad's generosity.
The moon is a reflection of Muhammad's beauty.
Musk is a little whiff from Muhammad's mole and tresses.
- Persian & Sufi poet Mawlana Nur ad-Din Abd ar-Rahman Jami (1414-1492).

Al Mesk Abyad is delicate and mostly rosy. The musk here is sweet and subtle and suggests ambrette seed absolute of the highest quality (sans the rancid nut tonalities that are usually found in this essence). The rose note smells very much like Bulgarian rose otto, though I doubt it is purely natural. It’s the most sheer, light and ethereal of all the five Arabian perfumes I brought back from Israel and Palestine. It’s cleanliness brings to mind the legends of the Prophet Mohammed's scent of musk and rose, a symbol for his pureness and divinity.

The consistency of this oil is thick and viscous, like light honey, and it's clear and transparent. I've got this from Muhammed Qabbani's shop in the Muslim Quarter of Ancient Jerusalem. The price was 60 NIS for 10ml (equivalent to about $15 USD).

Sometimes, our dreams become fulfilled without us knowing it. It happened to me last Saturday, in the ancient city of Jerusalem. I haven’t been to the Muslim quarter of the ancient city since I was a very little girl. In those days, my parents were particularly adventurous and their longings for nature lead us to long trips every Saturday in the mountains, villages and orchards surrounding Jerusalem. They also tried to lead a life style as close as possible to that of the local population, namely the Arab, Druze and Bedwin of the country, who lived there for many years before the Zionist jews re-surfaced from their prolonged exiles. This meant buying in the souk in the Muslim quarters. I remember our expeditions there very clearly, and in particular, the one time when we went there to buy hand-made mattresses, one small one with a yellow cover for me, and a beet coloured double size for my parents. The mattress merchants carried them on their shoulders through the streets, and so did many merchants: the souk was a lively, dynamic scene. You can still see some of this happening now in the ancient city, as well as in Jerusalem’s Shuk Mahane Yehuda (the less ancient souk in the newer part of the city, in Nahlaot – one of the first neighbourhoods that was built out of the walls of Jerusalem when the city became over populated in the late….. DATE!!!). Delivery boys from the many bakeries carry rectangular trays full of pitta, challah and fresh bread, and other goods in the Ancient city. It seems as if they will stop at nothing with what they can carry on their heads, maybe even a live goat!

The souk was always humming and buzzing with activity, crowded with curious and busy people, or those who just got lost in the colourful jungle of abundance. Loud cries of the merchants offering their goods – baklavas, caramelized nuts, nougats and other sweets carted on large round trays (you can see these large-wheeled carts to this day); cold beverages back-packed in a large brass container with little taps – lemonade, tamarind or sous (licorice root drink).

I started my short-lived visit to Ancient Jerusalem this year with two of my brothers and one sister in law. It started innocently and only later on I found myself fulfilling not only one dream, but two, with no intentions or expectations.

First, we had an Harissa/Tishpishti that I managed to acquire using my non-existent Arabic. This Harissa was of a quality that I’ve never tasted before: consisting as always of melt-in-your-mouth semolina crumbs soaked in honey syrup, yet with a raw, animalic aroma of goat dairy. I suspect the butter and buttermilk or milk used in this recipe were indeed from goat’s milk, and it made all the difference. It reminded me ever so slightly efeof knahfeh, but not as violently sheepish in flavour. These ones were decoarated with peanuts rather than the traditional almonds, and this was also an interesting surprise.

We sat at a teahouse in the Christian quarter, and fingered the honey-soaked harissa while smoking apple-scented narguilla (hooka) and sipped the sweet black tea scented with fresh sprigs of spearmint. After a watching the passers by, breaking one hooka and exhausting the capacity of the tobacco to steam and release pleasant aroma – our party split, and only those with any energy left after the long walk and the long relaxing smoke continued on.

We kept walking down the paved and roofed streets, which suddenly became crowded, at the “modern” part of the market. Amongst fabricated brand-name goods, green almonds, fava beans and sour plums in season, piously long women’s kaftans, Fulla dolls (the Muslim culture’s rival of Barbie, which were what I was searching for in that part of the market to begin with) in every colour and costume, I found a little shop that stopped me on my tracks. It was a dark, tiny space, filled with bottles from corner to corner, floor to ceiling. They all had labels with Arabic writing on them, and were designed in more or less the same fashion – like large lab flasks. Some were fuller than others, and the colours of the shimmering juice within them varied in colour from clear to dark, dark brown. Empty bottles were stacked next to each other on another shelf – some were fancy crystal bottles, some were small and some were larer, some roll on and some spray and some were even a fill-it-yourself replicas of Flower by Kenzo...

I stepped in, eager to smell Arabian ouds and musks first and foremost. A similar shop I’ve visited in the Druze village of Yarka just a week before had lots of interesting smells, but oud was not one of them. My bluntness about the oudh and Arabic perfumes surprised the merchant, who expected me to search for a popular dupe of a famous French perfume and even tried to sell me an Angel dupe at certain point. Just as I pocketed my 3 new olfactory acquisitions (which will tell you about at a later time), and was getting ready to take some pictures of Muhammad Qabbani in his shop, a few more customers stepped in and I was trying to get better shots so I stayed longer than I meant to stay. We talked a bit about perfumes and Mr. Qabbani shared some interesting anecdotes about the tradition use of natural musk in Arabic medicine, told us about his studies of ancient Arabic medicine and herbalism, and peaked our curiousity by telling us about perfumes that he is not allowed to sell to single women from fear of making men mad. Before long, our conversation turned into a diagnosis session of traditional mystical Arabian medicine as Mr. Qabbani attempted to read my eyes and suggested an explanation to my daughter’s condition as a possession by a demon (he is a sensitive man, and so he used a delicate language to express his ideas to not scare me completely…). He did so all so innocently and genuine self conviction that it was difficult not to listen to him with an open mind and I must confess my first urge after my conversation with him was to study Arabic ASAP (it’s really high time I do this!) and get acquainted with the Kuran, which by the sound of the CD I heard at his store is a wonderfully long poem that can be soothing to the soul even more than Um Kultum and Billy Holiday put together. And let’s just not forget that some of the Arabs and Muslims, were the greatest alchemists and perfumers, and I believe perfumery today owes quite a bit to them.

Next on SmellyBlog: reviews of the Arabian Perfumes I got in Israel/Palestine.

P.s. I just got back a couple of hours ago from my travels finally, but wasn't able to post this earlier. Hopefully the milder weather of Vancouver will allow me to enjoy the two heavier ones in the bunch.
Back to the top