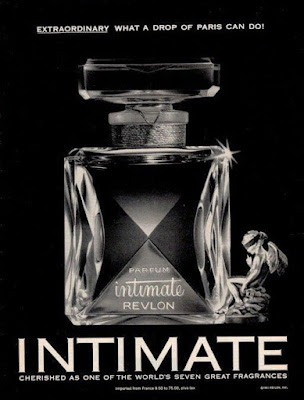 I'm excited to have something to do on such a rainy day (because, clearly, unpacking all my raw materials for my perfume making class on Sunday is "not enough work", not to mention the other trip I have to make to the post office, to ship packages & thank-you gifts and SmellyBlog prizes off). Great distractions, I suppose. But that's what makes life all the more interesting! Chantilly is a sensual mossy-ambery perfume. It begins with a typical chypre accord topped with whiff of lemon and underlined with rose, which quickly reveals the complex mossy aroma of cedar moss:
Woody, dry and somewhat powdery, and surprisingly - leathery!
The heart possesses also carnation and I believe a dash of allspice which can explain the dry spiciness, and some rich creamy jasmine that adds some roundness and balance.

As the scent evolves on the skin it becomes softer and less dry, and a beautiful amber base reveals itself: amber, benzoin and I suspect a bit of myrrh (which has a somewhat rubbery, balloon-like note) and very subtle animalic notes of opoponax. The leather is now a lot more gentle and mellow.

Chantilly has a captivating and calming sensuality –
It’s like an old seductress that will always be tempting to wear again…
It is sexy in a subtle and classical way, like a woman with a rich life experience behind her, and a beauty that is not artificial or pretentious.

I see is standing hand in hand with other mossy orientals such as Nuit de Noel, Femme (I am referring to the parfum) En Avion and Vol de Nuit.

The vintage is a lot less sweet than I remember the new Chantilly to be and a lot less floral. It is neither as powdery and musky-sweet as the current version available in drugstores these days.

Top: Lemony, but just for a few seconds

Base: Cedar moss (a lot more dry and powdery than oak moss - but this could also come from peru balsam essential oil, rather than the crude resin), Amber, Benzoin, Opoponax, Myrrh, Leather

P.s. Special thanks to Frances-Anne (AKA Paloma) who enabled me to try this beautiful vintage scent, and many others).

Amongst his many other talents, my brother Noam has an infamous talent for finding treasures in the least expected places: alleys, photo booths, flea markets and forsaken thrift shops in Tel Aviv. One of them was an antique coffret of three Molinard’s concretas (solid perfumes) presented in their original bakelite boxes. Inside they look a bit like an ancient dark resinous lipstick.

I researched these a bit and they could be dated as far back as the 1940’s. The three concretas have preserved their scent tremendously well, and among them was a Mimosa concreta. Although the material itself is waxy and somewhat sticky, it is worth inhaling for its magnifiscent, creamy mimosa fragrance. It is most delicious and reminds me a lot of Farnesiana (to be reviewed here on SmellyBlog shortly).

A couple of years ago Paloma (aka Frances-Anne Ade), a fine lady from the Perfume Addicts forum, sent me a gift of a lifetime: about 30 or so samples of rare vintage perfumes. To her this corner is dedicated, and I am hoping to be able to live up to the challenge of decoding the mysteries of these antique beauties.

The following are the links to the reviews of these rare treasures: