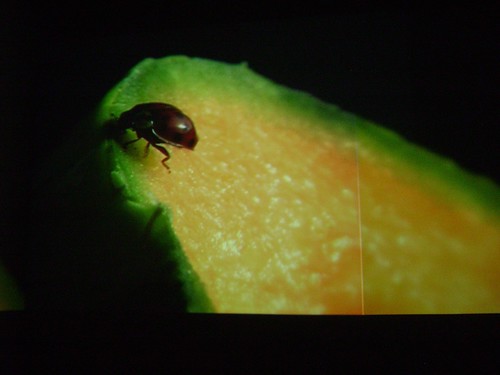 When visiting Grasse in spring 2009, I was intrigued by Salade de melon et jambon de Parme
(AKA Prosciutto e Melone - a simple carpaccio dish that seemed rather alluring even to my eternal vegetarian-born-and-raised palate. Thin slices of cured ham were layered flat on a plate, and wedges of cantaloupe arranged on top. It seemed so odd to me to pair something so meaty and brown with something so vividly orange and juicy. But, living vicariously through the carnivore boyfriend I had at the time, I gathered that the magic lay in the contrast between the saltiness of the prosciutto and the fragrant sweetness of cantaloupe - not unlike the Balkan signature pairing of crispy sweet watermelon with creamy and heavily brined feta cheese.
Later research into the matter also informed me that pork has a coconut, peach and apricot-like notes to it from lactones, which makes it so suitable for pairing with fruit as well as certain fruity white wines or lightly oaked reds. Vegetarians may enjoy a somewhat similar experience by savouring tiny cubes of well-aged Pecorino Romano with abovementioned cantaloupe; or if you want to go overboard, find yourself a coconut-gouda and watch out for exploding tastebuds. And since we are on the topic of coconut, vegans can also enjoy the coconut and cantaloupe contrast by sprinkling fine coconut flakes on their melon; or toasted coconut curls for an even more decadent experience. 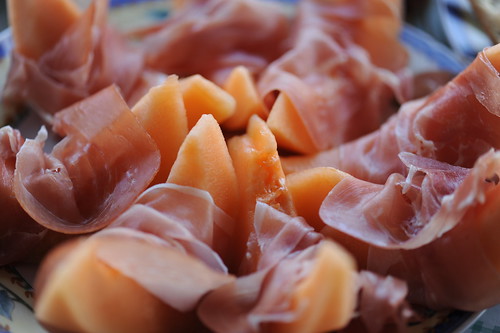 While in Grasse, I had the pleasure and honour to meet with Michel Roudnistka - a multi sensory and visual artist (photographer, perfumer and filmmaker who combined his videos into a film that is accompanied by five difference ambient fragrances, each for a different indigenous culture around the world), and that is when I firs experienced his magnificent perfume Emotionelle, which he created for Parfums DelRae in San Francisco. How does Emotionelle smell?

Picture this in ripe, juicy, room-temperatured cantaloupe in your mouth, with a full-bodied flavour filling your entire palate: 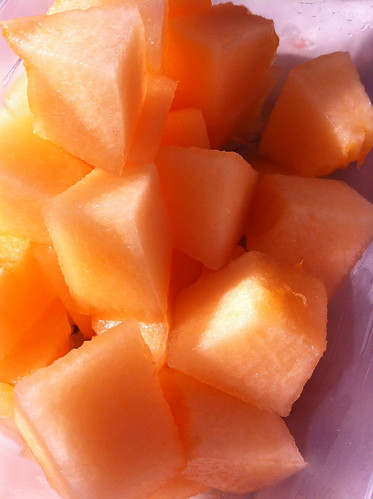 Suddenlly and immediately, you are interrupted by more than a whiff of this indolic jasmine: 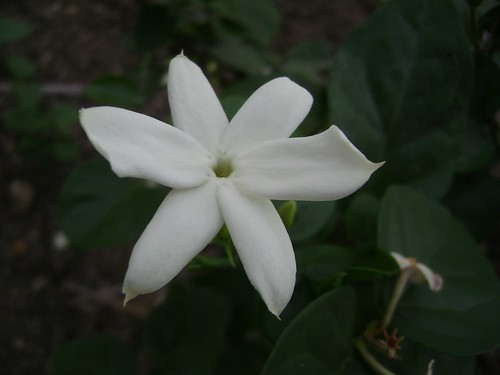 That is the basis for Emotiomelle, the main structure upon a complete, original and unusual perfume is built. One could argue the source for this pairing is in Le Parfum de Thérèse (which the perfumer's father created for his mother), or Diorella. However, the other two had melon, not cantaloupe. And that is a huge difference. As far as influence goes, I would suspect that a new cantaloupe molecule or base was invented that year in one of the Grasse houses, because both Emotionelle and Un Jardin Après la Mousson (which pairs this very cantaloupe note with more bracing, chilled spice notes and cooling vetiver) were released the year prior (2008).

Emotionelle opens with a big, ripe, juicy cantaloupe note and is paired with sultry jasmine and sweet violets. It’s hard to believe these will get along, but they sure do. The key is in the balancing of the animalic indole in the jasmine with softly-blended, oily violet, musk and cedar notes, almost like pastel crayons smeared with a persistent finger to create a bold picture with loud colours yet with very soft texture.

The result is magical, even if a little disturbing, like striking the right chord in the right time. After all, we are talking about pairing something very edible, with something very floral and animalic. To me Emotionelle is very sexy, sensual. I like the fact that it's a distinctive tricolour - with cantaloupe, jasmine and violet being in the centre at all times. There is a complexity and tension that all three bring to the composition, but there are also other subtle layers underneath that keep it from being too simplistic and ordinary. Those who yell "cantaloupe" and dismiss it (most of the reviews I read, actually) miss the entire point. There are many composition styles, and Michel Roudnitska's is one that takes a theme and goes all the way with it. It's also what I smell in Noir Epices: it's very bold combination of geranium, cloves, orange and cinnamon. But it's brining a new, modern meaning to the ages-old pomander scent (the root of all Oriental-Spicy scents, if you ask me) - by not trying to play it quieter, but rather amplifying the seeming dissonance between those notes. Those who pay attention will find it actually humorous, playful and at the same time sophisticated. In the case of Emotionelle this is achieved with low dosage of musk to offset the animalic indole; cedar wood to substantiate the ionones; and warm, sweet notes of honey, amber and labdanum to deepen the sweetness of the cantaloup, with tiny sparkling of spices (cloves, cinnamon) for a bit of warmth and dimension. 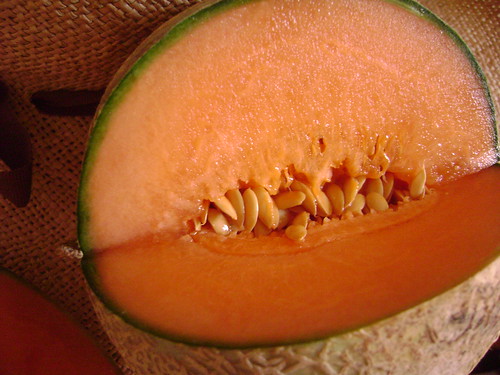 To me this perfume will forever remind of Southern France and in particular Grasse, and the visit to Michel's studio and home in Cabris where I first smelled Emotionelle. There was an osmo-art (multi sensory film) projected in one of the room of the MIP (Musée International de la Parfumerie, AKA International Perfume Museum) of which an image of a ladybug crawling along a split cantaloupe was the olfactory if not visual highlight. And lastly, the cantaloupe in the above photo is one I bought and ate there, in its entirety, one afternoon. I didn't have a big enough refrigerator in my hotel room there, so I had to eat most of it room-temperature (which is actually delicious, by the way: it makes the fragrance more apparent than when chilled). It is the perfume of a hot spring day up on the mountainous Alpes-Maritimes-Cote d'Azur, where the sun shines generously, people are warm and hospitable, life is slowly savoured with the people you love, lunch breaks span over two hours minimum, and an afternoon siesta to follow is not a bad idea at all, especially when the room is permeated with a fragrant cantaloupe. 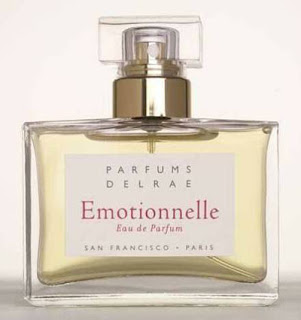 Top notes: Cantalupe, Tangerine, Bergamot, Ylang Ylang, Prune
Heart notes: Jasmine, Violet Flower, Violet Leaf, Rose, Cinnamon, Honey
Base notes: Vanilla, Cedarwood, Cloves, Patchouli, Musk, Amber, Labdanum
Naming has the power of bringing our attention to the subtle qualities of a scent. In Tarnished Silver, botanical extract expert Dabney Rose brings forth the metallic qualities of violet. I've been fortunate to experience several of Dabney Rose's innovative botanical enfleurage of hyacinth, which she added to my order of hydrosols, and have also traded a copy of my book for her gorgeous pommades of tuberose and  breathtaking butterfly ginger which I have recently reviewed here. Tarnished Silver is the first perfume blend I'm experiencing from this talented lady. This time it arrived in my mailbox completely unannounced (though most welcome!) alongside a beautifully assembled collection of handcrafted Kyphi incense. They all arrived right before I left for my trip, and I left them behind, knowing I will not have the appropriate conditions for incense burning on my travels.

Tarnished Silver, however, was tucked in my carry-on and I'm enjoying it immensely. I am now riding the train to the north part of Israel - the Western Galilee. Stretches of fields, meadows, orchards, and factories pass by the window, and glimpses of the Mediterranean sea delight the spirit as the train gently rocks and hums its way to our destination. There is wi-fi on board the train (which I won't easily come by when I reach my home village, an off-the-grid hippie haven). So here I am again with a dab of Tarnished Silver on each wrist, enjoying the scenery.

It opens with a melancholy tinge of violets: at once sweet yet also bitter. Sharply green yet soft and diffused, almost powdery. It's amazing that fresh violets can be captured so beautifully with this vegan enfleurage - truly a labour of love. To the sweet ionone facets are added some other notes though subtle: honey, perhaps a tad of hay or flouve as well or something else that gives it a bitter sweet coumarin undertone. A touch of rose and oakmoss give it a very vintage feel, like a Chypre from the turn of the 20th Century. So much for the candles!!, a photo by she who is on Flickr.

There’s no mistaking the influence of No. 19 upon opening the cute little 15ml splash bottle of my friend and colleague, fellow Canadian (now turned Grassoise) perfumer Jessica Buchannan’s newest creation, Fleur No. 1 galbanum and iris make a happy dance that echoes the distinct accord that is so characteristic of Chanel’s iconic scent, yet with far less melancholy, and with underlining softness of musk. After a few minutes, Fleur No. 1 quiets into a mellow sweet violet of alpha ionone, that quietly hums for a prolonged period of time. Once you’ve made the leap beyond the violet drone, you will find a meadow with delicate green floral narcissus and hyacinth notes, warm woods and a hint of oakmoss, and if you listen carefully – a subtle coniferous note that is softly green, like the new growth tassel of spruce in springtime. I joined the celebration of launching Jessica’s line at Lark boutique on Main St. tonight (July 14th), where she recounted her inspiration for the scent – spending last spring in Nelson, BC, she had to stray away from her originally planned first floral (a sunny, Mediterranean perfume that echoes the landscape of her new home in Grasse), and instead found inspiration in the moment – the melting snow, new buds and leaves and wild violets growing on the mountains of interior British Columbia, where she grew up. There is something to be said about embracing the moment. Canadian Perfumers, a photo by Ayala Moriel on Flickr.