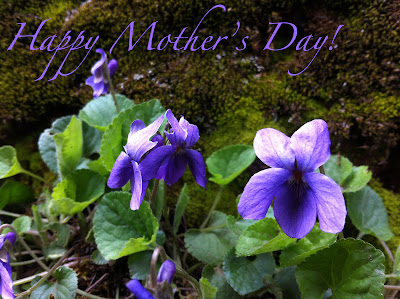 My mom was always an au-naturelle kinda gal who loved real flowers but not perfume. So she never wore scent, but preferred floral prints instead, and would always pick beautiful flowers to cheer me up and weave a beautiful crown of spring flowers for my birthday. She even put edible blossoms in my salad (nasturtium and wild garlic flowers), and would cut the radishes into flower-shapes to encourage me to eat them.

Although she never worn perfume - she always loved aniseed tea and caraway-studded breads. So it comes as no surprise that to this day, I associate her with anise and and the enigmatic notes of violets and iris, which I find as soft and mysterious as herself and the midnight-blue crushed velvet she liked to wear. Kinda like what I imagined l'Heure Bleue when I read about it and before I smelled it.

It was only years later that she told me that indeed violets, anise, chocolate and vanilla were her favourite smells (before she lost her sense of smell almost permanently due to chronic colds...). And she also loved the lilacs she picked for me in her first visit to Vancouver (which sadly ends tomorrow...) Years ago, I created Indigo perfume in her honour, and I've put anise, caraway, boronia, violet, carnation, orange blossom, frankincense and amber in it... Now I'm thinking that although I was probably on the right track - I should make her another perfume, and hopefully she could smell it occasionally - with cacao and vanilla absolutes, violets and anise.

What perfume did your mom wear as you were growing up? Or what scents do you associate her with?

Leave a comment and enter a draw for a mini of Viola, my violet soliflore, a decant of Patricia Nicolai's Sacrebleu and a few other goodies... And - a quick reminder, that today is the last day of my Mother's Day free shipping online event.

This afternoon is my first time wearing Eau d’Hermes. I stepped into the boutique on Burrard and Alberni after running some errands in the area (spontaneous trips to upscale boutiques takes off the edge of how stuffy the experience could be – especially since I’m always there just for their cheap perfumes and not the Kelly bag). My initial intention was to finally try Pampelune Rose (samples run out at Holt Renfrew and this was the first time in a few days that I wasn’t covered in Femme EDT when I left the house). Surprisingly, the 3 new Eaux didn’t even arrive at the Hermes boutique. So instead I decided to try Eau d’Hermes. I liked it right away sniffed out of the bottle, so I didn’t even bother spraying it on a paper beforehand. I’ve already heard about the cumin note so unfortunately this was not a surprise for me. But since I was a cumin kick anyway, it only made sense that I wear some on.

Eau d’Hermes didn’t quite smell like an eau at all. Instead, it was simultaneously fresh and warm. The cumin note, which must have been ahead of its time probably was what gave Olivier Cresp the idea for the Femme reformulation. But here it smells surprisingly clean and woody, not at all the carnal sweaty steam one gets from Femme. It is decidedly rather masculine and dry and the sensuality underneath reminds me more of oriental leathery compositions for men rather than the sanitary character of a short-lived “eau”. And despite the cumin, it did not smell like curry (or maybe, a French curry… I had Indian food in France and the only spice I tasted in there was cumin!), but rather woody and almost like caraway in that sense. And also a warm woody spice like cinnamon bark. There is a hint of masculinity at the top which proboably comes from lavender, and also an underlying leathery and tonka and perhaps patchouli notes. But what I particularly liked is how the jasmine shines through at the heart, along a rosy note. It's a very spacious floral accord (probably because of hedione, which has become somewhat of a signature of its creator, Edmond Roudnitska) and an unmistakable animalic sensuality of these florals while dariating a very well-behaved, lightweight presence overall.

I stepped out of Hermes feeling very content with my choice, and enjoying every moment of it and how it interacted with the environment. It’s rare to find a scent that does that so seamlessly – being present but mingle with your surroundings. I passed the hot dog stand and the cumin went well with the sautéed onions. Walking by hot pavements and sun-warmed asphalt it became part of that too, and my last stop before heading back home and writing this, I had some peculiar scoops of Marron Glace and Lemon Cream at the air conditioned Mondo Gelatto and it went well (both flavoured were contaminated with something else – the lemon cream had some kind of a chocolate and cloves rice crisps on top for no apparent reason; and the candied chestnut scoop seemed to have some brandied cherries thrown into the mix). But it all went well together – some peculiar warm-spicy and chilly-clean experience.

Simultaneously fresh and warm, Eau d’Hermes is not exactly an “eau” in the usual sense of a light, short living olfactory experience. In any case, expect something more along the lines of Habit Rouge or Le 3me Homme rather than Eau de Coq or Eau d’Orange Vert.