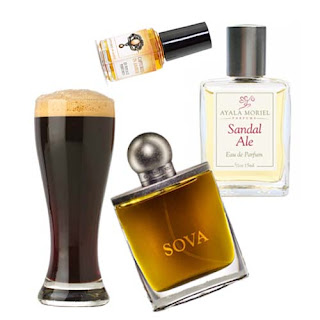 Visit EauMG's section to discover quirky and unusual scents for fall, handpicked by Victoria Jent, including Sandal Ale to celebrate Oktoberfest!
"This such an unusual fragrance but it’s so nifty. It’s like an Indian Pale Ale with sandalwood. It’s really interesting."
Sandal Ale was previously reviewed on EauMG.  If you wish to purchase it, visit my new online boutique!

Visit EauMG's section to discover quirky and unusual scents for fall, handpicked by Victoria Jent, including Sandal Ale to celebrate Oktoberfest!
"This such an unusual fragrance but it’s so nifty. It’s like an Indian Pale Ale with sandalwood. It’s really interesting."
Sandal Ale was previously reviewed on EauMG.  If you wish to purchase it, visit my new online boutique! While most of the production of hops goes directly into the thriving beer industry, it does find some use in some spice blends and sauces (I’m still looking for recipes for you!), flavouring tobacco, and for flavouring liquors (usually in combination with oils of angelica root, cascarilla and the like - in short: musky, bitter, herbaceous oils). What little hops makes it to the perfume industry like ends up in colognes (where it will add an unusual fruity note to complement the citrus and herbs), fougeres, and perhaps some oriental bases, where its spiciness will shine if treated well. I take some sandalwood from Australia (organic, by the way). I add generous amounts of cognac absolute, hops, marigold (also an ancient beer ingredient) and anything else that renders yeasty, effervescent and beer-like in my mind. And voila! A sandalwood beer cologne is born. Three weeks later - it has only gotten better: smooth, fruity, fresh, complex, piquant and intriguing. Just like an apircot craft beer. Hops, a photo by Ayala Moriel on Flickr.
Not much harvest at the farm in November, and today even the hops were one... But with beer on my mind (not on my breath, I reassure you!) I've pulled out this photo from a couple of weeks back, and am excited to learn a little more about this very weird raw material. Hops are mostly known for their long history (around 2500 years!) use in beer. My first encounter with them, however, was with the Flora Linden custom tea that Inner Alchemy Tea Co. made for my limited edition Tirzah tea way back when. An unusual herb to use for tea. Hops are the female blossoms of Humulus lupulus, an herb that originated in China and traveled to Europe, where it is was first cultivated in Germany, and is now grown around the world (mostly in the 48 parallel north), almost solely for beer.

Hops has medicinal properties, but it is mostly used for making beer: not only as a flavouring agent, but also aids in preserving it. Other herbs that used to preserve fermented barley were dandelion, marigold, heather and more. Hops tops them all in terms of preventing spoilage and has become the main ingredient, giving beer its distinctive bitter taste and tangy and sharp flavour.

I’ve spent this evening researching hops and while most of the online articles focus greatly on its beer-related history, digging in my aromatherapy, perfume and flavor reveals that there is a lot more to discover about this seemingly single-minded herb. Just to scrape the surface, did you know that:
1. The main ingredient in hops is stored in glands inside the strobiles (the “cones” shaped female flowers) and is called Lupulin. It is highly sensitive to oxidation.
2. Hops has the ability to soothes the nerves and relieve tension. Dream pillows stuffed with hops are a sure remedy for insomnia.
3. In herbal and folklore medicine, hops are used for sexual neurosis in both men and women. Hops is also considered an aphorodisiac. Now that gives beer a whole ‘nother dimension...!

Hops shall receive a more elaborate treatment on SmellyBlog over the next week or more, as I discover its unique characteristics both in my library and my lab.

Have a wonderful weekend!
Back to the top