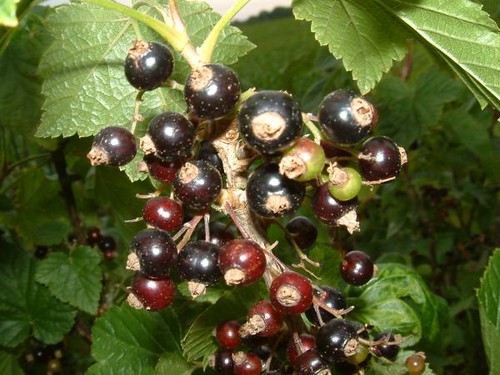 The cassis and cat-urine analogy is nothing new. But I have always found it puzzling. Perhaps because I can't say I ever smelled a cat pee. And judging by how their other secretions smell, no matter how deep in the sand they try to bury them - I don't really want to know.

To me, blackcurrants (Ribes nigrum) have always been this peculiar, juicy yet funky berries, with sophisticated profile of very pungent odour that comes through the nose when eaten (or drank), a full-bodied aroma hiding behind it, yet contrasted again by a sharpness in the palate from their intense tangy taste - sour, if I'm allowed to use that word without offending anyone (I heard that vintners get particularly insulted if you use this to describe tart/tangy wines!).

Turns out there is an explanation to this unsavoury association: blackcurrants contains several sulphuric compounds called thiols. Namely, we're looking at p-mentha-8-thiol-3-one, 4-methoxy-2-methyl-2-butanethiol and last but not least: 4-thio-4-methylpentan-2-one, which is identical to the compound found in fragrant feline urine. In fact, it is also called Cat Ketone!

Although sulphur is one of the CHNOPS - the six elements that make up all compounds of organic chemistry (along with carbon, hydrogen, oxygen and nitrogen), sulphur-containing compounds are not very common in perfumery ingredients. You are definitely familiar with sulphur compounds from the culinary worlds - sulphur is found in many edible foodstuffs, from staples such as eggs, garlic and onions to less obvious grapefruit and asafoetida (the latter is used as a substitute for garlic and onions among Buddhist monks that are forbidden from eating these lustful substances).


In Europe, and especially Eastern Europe and Britain, cassis is a very popular flavour (and crop). In the USA - not so much (and there is a technical  explanation for that which has to do with a ban due to white pine blister rust as well in the article sited before). Generally speaking, blackcurrant bushes are susceptible to too many diseases and pests, and this is a problem that is constantly being a challenge to agricultural plants breeders. Another possible explanation for its popularity in Britain in particular is that in WWII, cassis syrup from local was distributed free of charge as a source for vitamin C, to counteract disease and malnutrition whilst the island was isolated and deprived from its citrus supplies from the continent.

I've experienced it in teas, cordials, fruit juices (Ribena being a famous brand of those) and sodas, fruit wine (amazing!), liqueur (Créme de Cassis, Cassis Vodka and more) and cocktails (Kir Royale, anyone?), candy, and even as a flavour for pastilles of Bach's Rescue Remedy. Then there is the famous savoury condiment: Dijon grainy mustard with cassis (try them in a brie & pear sandwich!) I particularly enjoy blackcurrants as a flavouring for black tea, and also it works in teas and tisanes blended with elderflowers (which has some surprising berry qualities that echo those of cassis). It is also wonderful in desserts (of course!). One that left a life-long impression on me are Violet & Cassis macaron by Pierre Herme. I also love adding some Créme de Cassis liquor to upside-down cherry-chocolate cake, as well as to a blueberry-sour-cream tart. If I happen to have the berries I would also mix them along with the blueberries for interest (and also to mellow out the intensity of the blackcurrants). The fresh or frozen berries can be added to strudels, pies, tarts, crumble and coffeecakes. Jams, jellies and syrups are enjoyed in or on yoghurts, cheesecakes, puddings, custards such as the specialty Danish and North German desert Rødgrød. Try my recipe for Lavender-Violet-Cassis Cupcakes,

Lastly, their aromatic, slightly bitter and astringent, intensely tart qualities make blackcurrant a suitable companion to savoury dishes such as meat stews and roasts (lamb in particular), seafood and fish, and even in barbecue sauces. The leaves are used in Russia as a tisane, and to flavour pickles.
I must try them fresh in a salad with tomatoes and mint - this actually sounds divine. I am actually feeling inspired to try them in a (cooked) beet salad with onion, spearmint and balsamic vinegar. 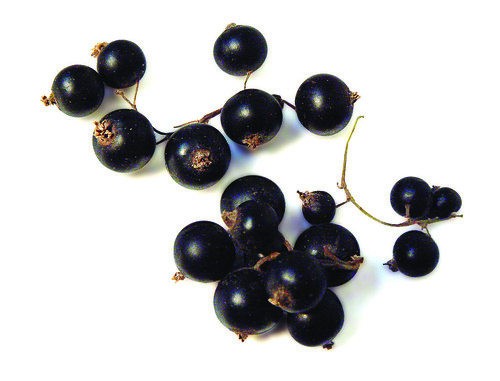 In perfumery, we don't use the berries, but rather the unopened buds, which are solvent-extracted to create to create blackcurrant buds absolute. This sticky, highly viscous liquid has a very dark green colour and is difficult to work with not just because of its challenging consistent, but because of the aroma profile: Intense, warm, pungent, fruity, berry-like scent. This note is often perceived as unpleasant, almost urinal when undiluted. It is only in high dilution that its delicious fruity cassis aroma comes out in its most appealing manner.
With all these challenges, it is invaluable in perfumery, because it is one of the few natural essences with a fruity aroma. Also it is unusual in that it is an animal top note! We use it in perfumes of the Floral Fruity and Chypre Fruity families as well oriental and gourmand compositions where a sparkling berry note is required. A little goes a long way with this intense absolute. Dilution to 50% in alcohol is recommended before using, especially if you're just beginning to work with this. This will help you both with the dosage and also to smell it more imaginatively. Even than, you will need only very little to add the unique cassis effect to your perfume.
Cassis aboslute is a very, very, very light top note. So whomever does not like it can rest assured this phase in the perfume they're experiencing is sure to dissipate within minutes. For the bold accessory note that it is, you might find it surprising how widely it is used, and also how versatile it is. Because it has both fruity, animals and green aspects - it really can contribute something special to composition of almost any genre - Floral, Chypre, Green, Oriental...
Blackcurrant buds absolute pairs particularly well with sulphur-containing grapefruit oil, rhubarb compounds, pineapple, strawberry and other fruit extracts, davana, cacao, ylang ylang, marigold (tagetes), vanilla, rose, galbanum, tomato leaf, boronia, violet leaf and most fruity citrus notes such as clementine, mandarin, blood orange, etc. It also works with animalic notes  such as civet, oud and beeswax absolute, giving them a lift to the top.
Famous perfumes containing cassis: the wonderful Chamade (Guerlain), with its contrasting galbanum, vanilla, oakmoss and hyacinth. Van Clef & Arpel's First (designed by Jean Claude Elena) - I must stress that although it was marketed as such, it was absolutely not the first to use this raw material. Also Aqua Allegoria Pampelune, notorious for its sulphurous qualities; l'Ombre Dans l'Eau (Diptyque) which is intensely green and rosy; AnaïsAnaïs (Cacharel), Black Orchid (Tom Ford), as well as troves of other "Fruitchoulis", Baby Doll (YSL), Ode a l'Amour (Yves Rocher), and Naomi Campbell's aptly named Cat Deluxe at Night.
Among my perfumes, Tamya, Treazon, Coralle and H21 contain notable amounts of this ingredient.

yellowstone national park :: sulphur springs, originally uploaded by mischievousmeg.
How often do the dirty and the clean mix together and stay clean? Apparently, this is possible not only in muddy and stinky sulfur springs, but also in a modern-day perfume by the name of Pure Turquoise. The concept of cleanliness takes an interesting turn as grapefruit is married with patchouli. All of the above being immensely artificial smelling in a charming way, like a flaunt of an “I just shampooed my hair” swept backwards releasing that completely non-original fruity fragrance of 2-in-1 shampoo+conditioner with grapefruit and avocado or whatever.

Yet it is not until one gets beyond that hair-flaunting that a dirty, dusty, ephemeral scent of skin that just dried from a long soak in sulfur springs (or perhaps an improvised outdoor spa treatment of a fool-body warp in salty black mud), that the grapefruit and patchouli accord can be seen in a completely different light.

Pure Turquoise opens clean, fresh, watery and fruity that it is almost the modern cliché that everyone stopped looking forward to about five years ago. Although the pyramid for this fragrance is said to include many exotic and unfamiliar notes – I am mostly noticing grapefruit, lily of the valley, patchouli and an overall flat and non-descript fruity-floral freshness.

This is quite in cotrast to what I would have expected from a scent including notess such as cactus flower, indigo violet, night-blooming cereus (AKA Queen of the Night – that cactus that blooms only once a year, with an intense night-blooming-jasmine fragrance; I haven’t had the honour, but I wasn’t as stunned by Pure Turquoise as I imagine I would be by the Night Queen), desert lily (a lily that grows in the Mojave and Sonora deserts). I can see a desert theme threading through the selection of notes, yet I can’t quite smell it with my nose… Not only that, even the more familiar notes, which I work with everyday, such as Blugarian rose absolute and orange blossom absolute remain to reveal themselves to my olfactory bulb.

The base, dominated by patchouli, dries down to a woody skin scent. Clean, fresh, serene, but not as sterile as some others scents belonging to the fresh genre. On the other hand, it is not as sensual or wild as you might expect from a base containing rum, vanilla and silver birchwood. I am mostly smelling a clean musk and patchouli, and the latest remains of the sulfuric grapefruit still hanging to its life by the nails… The new Chypre family, as we can see, is all about being pleasant and polite. Thought there is something centering and grounding that I find in the modern, fake Chypres, and that they still are very chic in their own way - I must declare that there is none of the excitement and sense of danger or breaking the boundaries when wearing these limpid though pleasant scents. To find that, one must go back to a real Chypre, before the days of reformulations. And before the days of faking it and pretending that patchouli and vetiver are mossy. They’re not.

Pure Turquoise comes in two concentrations: eau de parfum for the poor, in a difficult to grasp cut-glass spray bottle; and pure parfum, for the spa aristocrat who loves to stack rocks over their jus. The latter crystal flacon is topped with a humongous sized turquoise stone, which unlike the beautiful one in all the posters and magazine ads, is not smooth and roundish, but cut in angular shapes (just like the bottle is), and comes in a far paler and less impressive colour.

* To the left: the EDP spray bottle accompanied by the false parfum flacon. To the right: the true parfum flacon, with the angular-cut paler turquoise stone, which is what you'll get in the box...