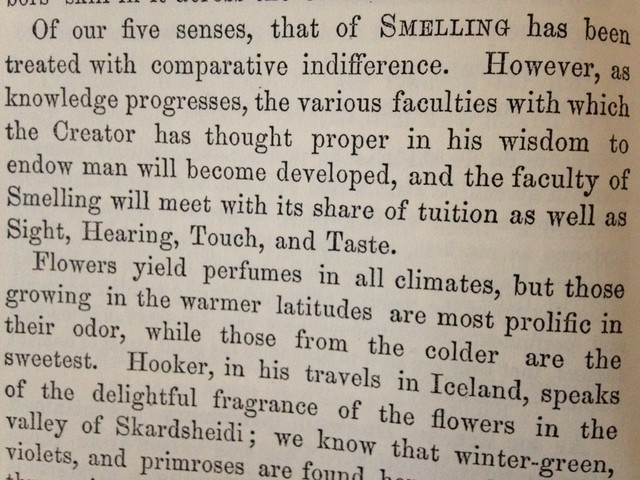 4) Questioning my personality and/or morality, because I dared asking that person what smells in real life they like (still waiting for an answer). I think that shows more about the lack of listening/reading skills of that commenter, and also their extreme, automatic bias to the topic. The pattern of thinking here is an illogical series of assumptions: "perfume is bad" and "perfume has a smell", therefore "smell equal perfume", and the conclusion is "anything that has a smell is bad". By "bad" they mean unhealthy, toxic, allergy inducing, unsafe, etc. All of which is putting a very big generic conclusion on a vast number of substances that have different origins, behave differently and have different effect on people, both emotionally, mentally and physically.

Today was a potpourri experimentation day for me. The trigger was an email from one of my students with an electronic version of Piesse's book “The Art of Perfumery and Method of Obtaining the Odors of Plants” has inspired me to re-visit my perfume collection and search for ideas for various “dry perfumes” – something I meant to do for quite some time. Unfortunately, this electronic edition (www.craftsebooks.com edition by Maria Wilkes) is full of misleading typos that could confuse the reader who is not already familiar with some of the materials (and in some cases the translation of names and terms is not too accurate either); but overall it’s a great resource and an interesting portal to Western perfumery in the mid 19th century.

The book is a well of information, including perfume formulas - many of which are flower replicas that rely on almond oil (bitter almond I presume) to do the trick of transforming the floral bouquet into lily of the valley, sweet pea or what not.

Some of the recipes there for potpourri and sachets are quite simple. For example: a patchouli sachet includes nothing more than 1lb of dry and ground patchouli leaves and 1 dram of patchouli essential oil; and than there are more sophisticated recipes evoking the scent of heliotrope (pounds of powdered orris roots, rose petals, tonka beans, vanilla pods and musk pods with a few drops of almond essential oil - the only case in which the almond actually makes perfect sense for the flower’s odour profile.

I’ve spent the entire morning in my little lab experimenting with my dry herbs and I’ve came up with 3 potpourri/sachets that are not half bad, all of which are based on my existing perfumes, The whole ritual of stuffing a little bag and placing it in between the clothes set me in a completely different pace and state of mind; it set me in that very old-fashioned, Imperialist mind frame of using exotic botanicals sourced elsewhere in little lady-like mousseline bags and so on. Perhaps I should have seen the warning signs when I became smitten with Pashmina scarves... Now I’m officially old: wrapped up in my silk Pashmina I look for secret places to hide my Film Noir potpourri/sachets made of dried patchouli leaves soaked in dollops of vintage patchouli oil and cocoa absolute… It's deliciously old fashioned and modern at the same time. Does this make any sense?