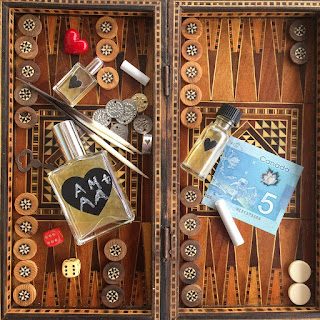 Being an artist means revealing one's more vulnerable, deeply personal side. Part of it comes from the artist's need for self-expression. But this need is not completely selfish. Through the artist's experience and ability to translate emotions into their artistic medium, they are enabling their audience to process their own parallel or similar life experiences, relate to them and perhaps even work through emotions that are at times difficult to access, perhaps even acknowledge not to mention deal with.

An artist does that by highlighting their aesthetic aspects, no matter how painful they may be, and showing a larger perspective - such as the symbology of a tragic story. To actually live it or re-live it would be a nightmare. But to read it or watch it on the silver screen may allow us to safely laugh, cry, and re-emerge stronger and perhaps even more resilient.

Perfumery is an art form, although some may argue otherwise.  My own perfumes are a complete expression of an idea, memory or emotion. I pour my heart and soul into creating them, from concept to designing all aspects, including the imagery that may accompany it (such as the postcards I create especially for some of my perfumes), the story behind them or the "ad copy" if you will. And of course sourcing the materials carefully (sometimes growing, foraging and extracting them myself). So much of myself goes into every bottle - my energy and intention, as well as my own personal story. Because most of my perfumes are a chapter in my own life's story. As winding as it may be.

The last perfume I've launched was deeply personal, even more than the others. First of all, I made it for someone very close to me who have since disappeared. It was with a heavy heart that we had to part ways, and now he is lost to me. I was debating for the longest time if to launch this perfume or not. In hindsight, I feel this was a mistake. Because not only was it not well-received (which I can deal with,  but it was even ridiculed. Or at least the story that I shared about it on SmellyBlog was. I wasn't counting on this to be a blockbuster, but I did want to share my story and love the scent very much. And very few bothered to actually try it (because I guess my personal story, as interesting as it is to me, wasn't appealing to them).

For whatever that is worth, I wanted to share with you these feelings I have about launching new perfumes and pouring my heart here or encasing them in flacons for that matter. I feel that I grow more and more distant from the perfume as an "industry" and want to fully express my potential as a human, a scent-artist, and do it freely. It does require courage. But apparently right now I don't have that courage. I want to learn, create and share with those who appreciate it. I am no longer in that phase of life when I feel the urgency to prove myself or my talent; this desire has long been replaced by the need of authenticity in all that I do: research, teaching, incense and perfume making, as well as blogging. 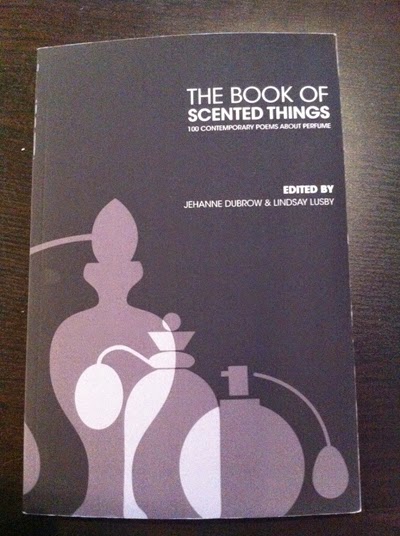 When the curators of The Book of Scented Things initially contacted me about their upcoming book, I immediately said yes, expecting a reference book of sorts, with poems by Rumi and Baudlaire. Wouldn't it be nice to have all these poetic quotes under one's fingertips?

A couple of weeks later, a book arrived in my mailbox. A mat-black paperback, with a texture reminiscent of faux nubok. As I was leafing through the pages, I realized right away that I could have not been any more wrong about this anthology. It has exceeded my expectations, and not only because the element of surprise. This book is an unusual collaborative project of 100 poems written by 100 American poets, and inspired by 98 different perfumes selected carefully for each (except for one). Jehanne Dubrow and Lindsay Lusby are the editors - but I feel that the title "editors" does not describe what they've done as well as the word "curators". They have selected a fragrance for each one of the poets, based on their life experience and poetic obsessions (often interrelated), and sent it to them in the mail, to spark a response in the form of a poem. The result is a most unusual collection of poems - some thoughtful, some full of emotion, others very personal and enigmatic, while others read like a perfume review.
There are many ways to approach the book and read these poems. But inevitably, I feel that many of the poems can't stand alone without knowing what perfume inspired them, and preferably having smelled it before. This is both an advantage and a disadvantage. It definitely makes it more intriguing for perfumistas to read such a book, and cross-reference it to their own experience. Some might even make the reading into a bit of a game - guess which scent inspired the poem (and find the answers at the end of the book). Some might find that knowledge to spoil the mystique of the poems themselves. One thing is for certain - it gets you thinking about the relationship between the muse (in this case - the perfume) and the poet.

As to be expected from an anthology of such breadth, it is quite diverse. The book begins with poems that are rather cerebral, exploring the meaning of scent, and relating to the peculiar experience of anticipating the arrival of a scent in the mail. With titles such as "On His Reluctance to Contribute to This Book" or "Receiving a Perfume Vial in the Mail" - the book stroked me as being too cerebral and specific to perfumistas at first glance. I hope that I will be proven wrong, as nothing would make me happier than knowing that a book like this encouraged readers to explore perfumes beyond the fragrance counter.

Which brings me to another topic - the selection of fragrances themselves. There seems to be a common thread among the perfumes chosen, and that common thread is very many scents coming from the same handful of brands. My guess is that because many of these scents have a rather simple, unassuming name, they would create a more neutral canvass upon which pure emotions can be extracted (rather than preconceived notions about the tone, intention, feelings, etc. that some names are more likely to invoke). You'll find plenty of fragrances that simply have a name of an ingredient or two (or three) in there - with a predominance of fragrances from Jo Malone. I highly doubt it had anything to do with sponsorship or with affiliation; but more so with the seeming neutrality that such plain names such as "Nectarine Blossom & Honey", "Blackberry & Bay" or even "Oud Wood". The few exceptions to this rule were "Narcisse Noir", "Ophelia" and "Oranges and Lemons Say the Bells of St. Clement's" - which almost reads like a poem without any additional help... A pleasant surprise was seeing several poems inspired by the wonderful work of my colleague Charna Ethier of Providence Perfumes.

I've been savouring these poems throughout the summer, and can't say I have read more than 25% of the poems. I'm enjoying the process of putting together the little pieces - which poem belongs to which perfume. And I'm reading them in no particular order that would make sense to anyone. Some have intriguing titles; while others I've picked because they were inspired by a perfume that I really like.

I could not help but notice that it was itself scented. A subtle scent of violets mingled with leather and an abstract representation of ink. That alone is enough to win my heart.

Read other reviews of this anthology on Bois de Jasmin and Sabotage Reviews. It is due to come out in October, and will be available via amazon.com and spdbook.com. 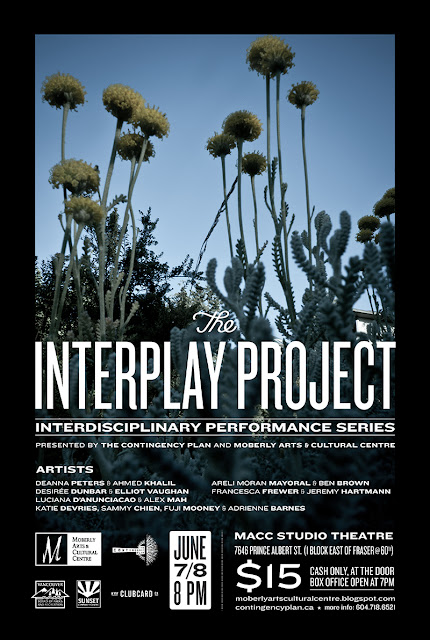 The Contingency Plan Collective puts together annual multi-media shows centered around dance in collaboration with other mediums and local artists. This spring, there are six choreographers who are working in collaboration with other artists such as live musicians, media artists, visual artists and more.
I'm extremely honoured and excited to be collaborating with dancer & choreographer Katie DeVries in her piece, which will be featuring 2 of my fragrances as part of her dance performance. Please go there and support local contemporary dance and art!
What:
The Interplay Project

Where:
The Moberly Arts and Cultural Centre

Tickets are $15 at the door
Back to the top