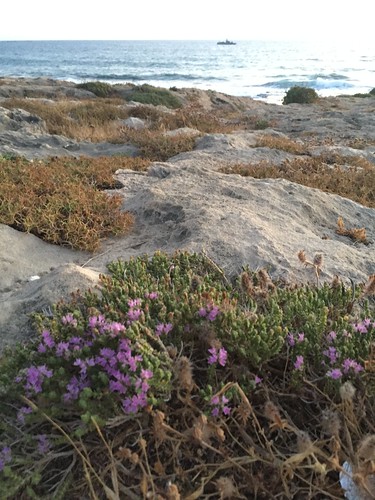 They met by the sandstone cliff overlooking the Mediterranean sea and the Lebanese border. He was there waiting for her for a while, and already found entire colonies of Coridothymus capitatus (Israeli Thyme). He held the little sprigs gently to her nose, allowing her to inhale its clean, warm, spicy, wild scent of mountains; exotic yet at the same time with the strong homecoming reassurance of za'atar in all its mundane glory.

Under the sandstone cliff there was a half-cave, protected from the wind and from prying eyes. And there he lay a straw mat and simmered water in a portable kettle with an improvised wooden handle on his little gas burner. From his knapsack he extracted what seems like a whole apothecary - little containers of dried herbs from his garden, raw brown sugar, yerbamate.

In they went, after he carefully examined each herb, as if communing shortly to see if it's the right leaf or twig, recalling the exact branch from which he picked them and which sunny spot in the garden they soaked up their healing powers: marjoram...wild white mint...thymbra...lemongrass... sensing which is right for this evening of almost-full-moon, and finishing off with the delicate spearmint, so it does not scorch. 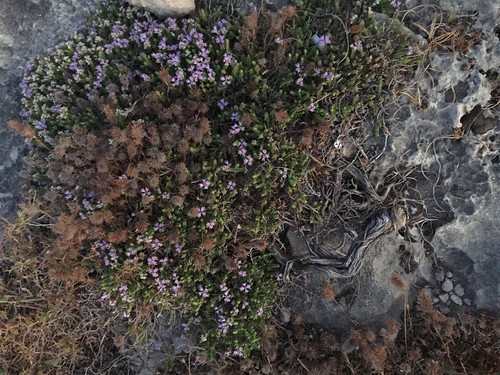 This entire brew was then poured into a fine little gourd finjan which was packed with dry mate. They sipped it from a delicate silver straw - savouring the mingled herbs and the astringent, tobacco-like mate.

The almost-full-moon lit the top of the salty waves with white streaks of light, competing with the red dots that lit along the sea-border. Maybe that is the time when love potions are supposed to be taken. When the moon is only almost full, so there can be a rerun the next night and the next?

Slowly their hearts opened and got closer. Or maybe it was just the poison of thymol seeping in through their veins and making them more brave than common sense would suggest. Or perhaps it was a metaphoric counter balance to the two dark silhouettes of the IDF navy boat patrolling the north frontier, approaching each other, ignoring each other, merging with one another. Blacking out.

Whether the thymol is their poison or medicine, they're yet to find out. For now let them enjoy the salty air mingled with juicy watermelon and coridothymus' floral, warm and cleansing purifying aura that erases from the heart all such worries.