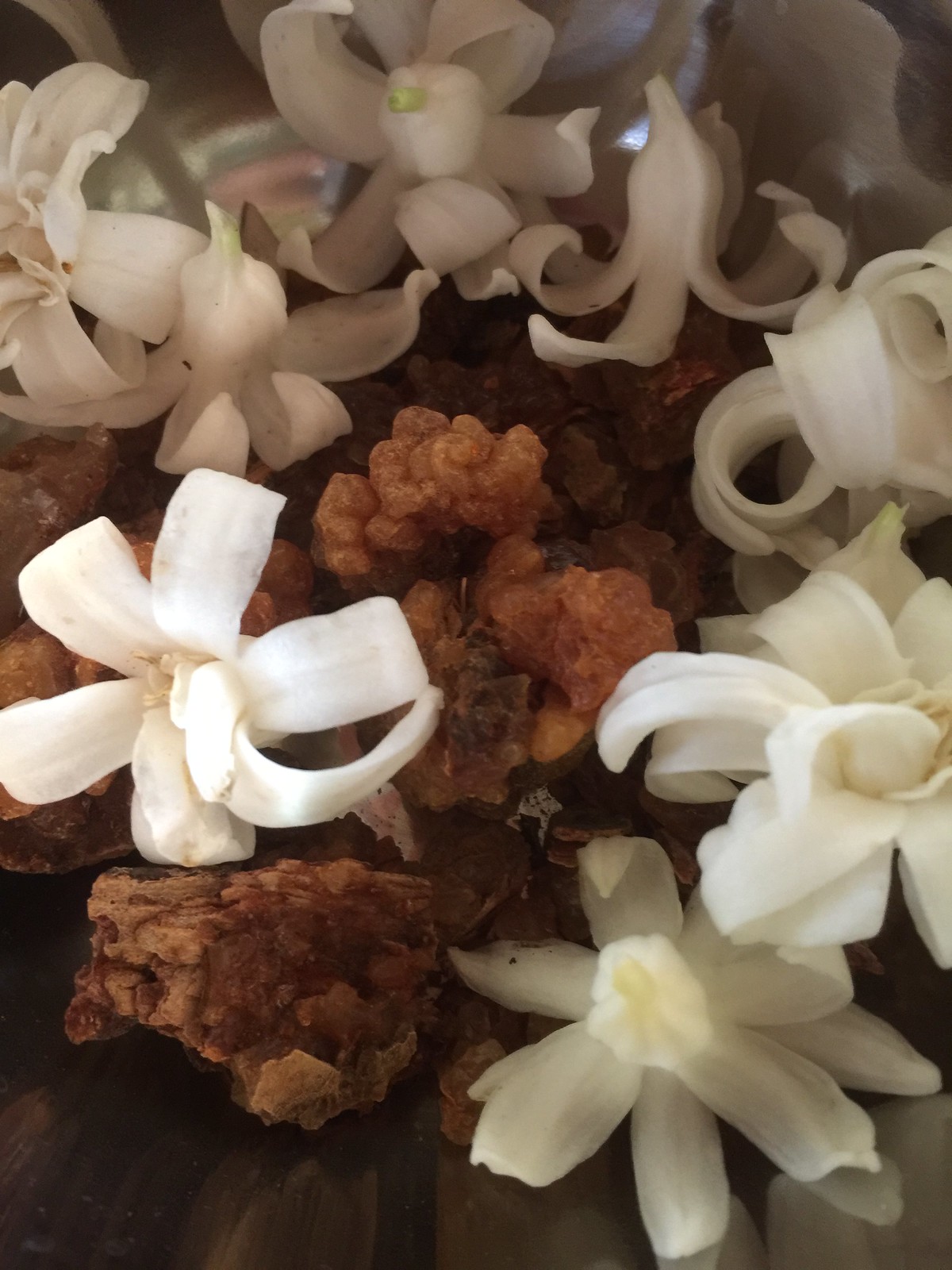 When the hyacinths were at their peak, I had enough flowers to make a dry enfleurage of Ethiopian Commiphora myrrha resin. Just as it seemed intuitively appropriate to pair the sunny brightness of frankincense with that of grapefruit blossoms, there was something about the contrast between the cave-like depth and catacomb-like mustiness of myrrh with the energy of a spring bulb flower. It smells like such a strong metaphor for spring's deep spiritual meaning rebirth, that is so strongly apparent in the natural world.

In winter, the bulbs are dormant in the ground. In spring they spring forth with a life force and push through the frozen earth towards the sun. Yet, I had an anterior motive for doing so. I made this very special incense as a spirit medicine for a young mother I know, who lost her baby only a few days after giving birth to her. The immense joy at the end of a difficult labour, the hope and happiness of becoming parents for just a few days all cut off so abruptly inspired me to create this incense medicine, as a reminder that even from the depth of myrrh's deathly grip one can emerge with a renewed life and bloom again like the hyacinth. Happy Easter to all of you celebrating today!
I thought this Easter Squirrel photo, being taken in British Columbia was particularly silly, and hope it will bring a smile to your faces too.

Just on Friday, I heard that daffodils are the only bulbs that these little greedy rodents don't steal, so you can be sure to find them in your garden next year if you live in squirrel land.

Although I don't celebrate Easter, I decided to wear Vanille Galante today, which smells like an Easter lilies and salted caramels. What are you wearing today? Happy Easter to all who celebrates!

White flowers symbolize purity in both Christianity and Judaism. The term “lily” as mentioned in the Old Testament, however, is obscure and it is still unclear which botanical species is referred to in the scriptures. The two names in question are “Chavaztelet” and “Shoshana”. The latter is often confused with rose by native Hebrew speakers and Bible translators. The correct name for rose in modern Hebrew is “Vered”. Both chavatzelet and Shoshana are most likely reference to bulbous flowering plants, and there are many ideas of what species it refers to. If indeed it is shapely white flowers – the possibilities could include narcissus or beach lilies - both very fragrant. Other possibilities include Netz Halav or wild hyacinths, which are blue and not particularly fragrant either. Although “lily of the valley” is mentioned in Canticles, it can be said with absolute certainty that this is not Convallaria majalis, a European plant that could not have possibly survived the dry conditions in the land of Israel.

Both the European Lily of the Valley and the Madonna Lily (Lilium candidum, native to the Balkans and West Asia), have developed into the Christian symbol of purity and chastity and is associated with Virgin Mary. Easter Lily (Lilium longiflorum) is similar in shape and scent to the Madonna Lily only larger, and is native to Japan.

Here are a few perfumes to draw on those qualities within you and aspire for revival and rebirth of your internal life force and pure intentions at this time of the year:

AnaïsAnaïs
Awaken the goddess within yourself (Anais was a Persian goddess) with this classy green floral with fruity and clean soapy notes.

Lily Angel (Garden of the Stars)
Indulge in a big gourmand lily with chocolate and patchouli.

Lily notes seem to be having some kind of a vogue recently, as we can see form recent releases of other mass produced designer fragrances (Donna Karen Gold, Guess Gold, and Juicy Couture’s fruity-floral candied gourmand take on lily) as well as celebrity fragrances (i.e.: L – L.A.M.B. by Gwen Stephanie, in a similar manner to Juicy Couture but a little more watery). It is already Easter Friday in the Holy Land and I am sure I am missing a fantastic ceremony in the Church of the Holy Sepulchure and the Christian Quarter in general.

I am heading north this weekend, and will be away from high speed internet and have no ambitions to post anything on my Mom's antique computer. Don't expect to hear from me before Tuesday... Until than, enjoy the spring, the flowers, the sun... And of course you can catch up with anything from the archives that you didn't read yet and post comments!

Below is a review of Lys Méditerranée which I am dedicating for Easter because of its lovely Madonna (Easter) Lily notes.