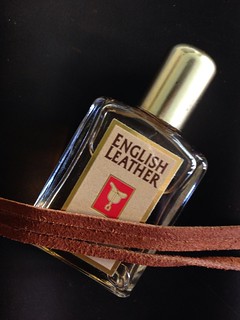 English Lather... No. It's not a typo. To me English Leather smells more like soap than it smells like leather. And analyzing the notes (again - what I'm smelling, not what the marketing material tells me) makes it bubble-clear why.

English Leather opens with suede-like notes of tobacco leaf and ionones, which are reminiscent of violets where they occur naturally. These are mingled with plenty of petitgrain, which soon enough takes over. Therefore, the leathery association end pretty quickly. The reason is not only this note's inherent dominant character; but also because it's more likely the actual material used here is linalyl acetate. Underneath it all there is plenty of coumarin to give it a very powdery-soapy character.  It really is more of a fresh tobacco leaf scent than a leather fragrance. Curiously, it brings to mind another violetty masculine classic, Geoffry Beene's Grey Flannel, a scent that is only one year my senior. As far as violetty masculines scents go, I find Grey Flannel cloying and overpowering, and am much more fond of English Leather. As far as tobacco-leaf fragrances, I much prefer my very own Sabotage. And as far as cheap classic drugstore scents, so far Tabac Original and Old Spice (which is next up on my to-review list) are both unsurpassable.

I don't know how English leather is supposed to smell, but I was thinking about saddle leather more than suede gloves. I have expected to be transported to the tack-room, but instead was sent straight to the shower for a scrub before I even got a chance to get dirty at all... I have a feeling its formula got scrubbed a bit since it was first created in 1949. 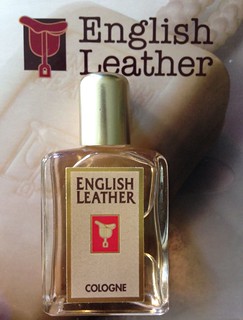 "Wear English Leather or wear nothing at all", says the box of the Soap-on-a-rope.
This daring slogan cannot be taken seriously. But it sure adds to the fun of exploring drugstore and barbershop colognes. Personally, what I'd like to wear with it on what smells like just-showered-skin is my baby-blue flannel pyjamas... I suspect it will smell more alluring and bold on a man though...
So let's move over to English Leather's Soap-on-a-Rope. That's a triple-milled white soap, stamped with the stirrup and accessorized with a white rope handle, in a sizeable length, enough to bring to mind Hitchcock's film. I am not certain what the tope is for, so can only guess that either men lose their soap bars quickly; or that they like to hang them to dry on the shower-head. I really did buy this one with someone in mind as a giftee, so I don't want to crack it open completely (plus I'm not particularly fond of milled soaps - and much prefer the artisan cold-processed ones, which can be made in much less drying formulae). I will only comment on the scent and report that it's even more cologne-like and far less reminiscent of leather, suede or anything of the like. 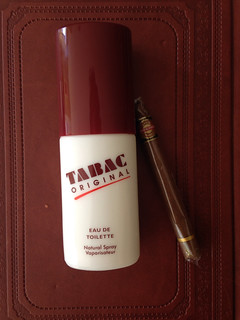 Tabac Original by Mäurer & Wirtz (1959) was ignored by me for many years after I took one whiff of it in my early days, and dismissed it. I can't even remember what was it that turned me off it - but I vaguely recalled feeling it was too overbearing and just let it remain on the shelf at London Drugs while I explored and rather enjoyed other cheap thrills there.

Years have gone by, and on a long-in-the-making hunt for men's drugstore fragrances, spearheaded by the absence of Old Spice, I decided to get a bottle of this one before it might disappear. Except for that vague recollection of the scent from many years past, you could consider it a blind buy. There was no justification for this purchase except that it had the word "Tabac" in it, and I just invested over a week of my life researching and teaching the topic of tobacco fragrances to my students. I figured - if I own English Leather, I might as well get this one too.

So last week, when the above mentioned acquisition took place, I arrived home carrying as many as four masculine drugstore classics, including an 800 mL of 4711 Echt Kölnisch Wasser, and being $90 poorer (for all four scents combined - the latter was the most costly of the bunch, at $54; Tabac Original was another high-end purchase at $24.99; the others were Old Spice and Brut, each at just over or just below $10). But I will tell you more about those later this week, as I go through the very limited and neglected bunch of masculine scents in my fragrance collection.

Because the other scents were already familiar to me (and some, like Brut, I could even just open and smell without any trouble returning them if I change my mind) - I decided to take my chances and that very same afternoon, sprayed myself (first hesitantly, and then rather lavishly) with Tabac Original. In essence, I was simply wowed by its originality, that I was able to quickly forgive the complete absence of any representation of "Tabac". There is no tobacco to be sniffed out in this fragrance, not even after a week of wearing it pretty much daily.

The opening notes are a delicious concoction of spices that exhale confidence, polished masculinity, and are pleasant and remind yet also bold and unusual. The spices all have a woodsy-dry character, which are most befitting for a masculine fragrance: Allspice, black pepper and nutmeg are at the fore, chased after by dry ginger, and this trio comes across as warm-dry yet invigorating (no pastry association, surprisingly). There is also some lavender, hints of pine, petitgrain and other citrus notes which gives Tabac Original its freshly showered skin, soapy accent, which  provides a beautiful contrast and balance to the spices. 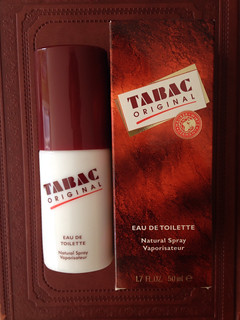 The lavender also adds an herbaceous, masculine floral nuance. The floral aspects are subtle, but can be also felt in the heart, where you might notice the clove-like presence of carnation, more soapy neroli, hints of geranium. But mostly what's present at the heart is an overdose of vetiver - or more likely, vetiverol - the vetiver alcohol that gives it the fresh and clean, tart-yet-sweet personality that is prevalent in Haitian vetivers more than any other variety. It's woody yet also gives off an almost juicy-citrusy feel, but also is very dry and elegant. This beautiful note is slightly balanced by hints of geranium, which also contributes to its masculine, dry-fresh and never overtly sweet character (even though if you'll notice - there is a lot going on here that could have made this sweet, if the perfumer only wanted it to go that direction). There is also a fair amount of alpha isomethyl ionone - which although does not occur in nature - it echoes the naturally occurring ionones in tobacco (though I am not sure I ever actually smell tobacco in there), and gives it some dry-violet, woody-floral nuances.

As we progress towards that base notes, the woodsy notes take over. And there isn't just vetiver - there is also cedar, and minute amounts of coumarin, which hint at the underlying flavour of a fine cured tobacco leaf, there is salty element too that is only vaguely reminiscent of oakmoss (there is non on the packaging, so perhaps they are now using evernyl, which is a very light and dry-smelling synthetic which vaguely resembles atranol-free oakmoss with non of its ambers-musky-mossy richness). But what really dominates the composition at the dry down is musk. And plenty of it. What we'd call "white musk", or the same musk combination you'd smell in musk oils that are sold in various shops offering fragrance oils (and often mistaking them for essential oils). Tabac Original thankfully develops this scent only many hours in, and until then it's mostly vetiver and spice and lavender goodness. It is one of the rare occasions when I care about the top and middle notes far more than the base notes - which I feel cheapen the otherwise superb composition.

If it weren't for Tabac Original humble origins on the Pharmacy's shelf, one would think it's the latest niche release from any of your favourite houses. Which just goes to show you how far do image and marketing go. It could have easily come from another respected historical Italian pharmacy-fragrance niche line, bottled in a simple apothecary bottle with the titled etched in the glass; Or carry a British heritage about the barber great-grandfather inventing it for some royalty or another; On the other hand - if Tom Ford were to market it, there would be some closeup of his unshaven cheeks with erotic  suggestions of thick white lather, perhaps licked off by a couple of famished-looking naked models (their gender is yet to be determined). Instead we have a very humble packaging that might have seemed cutting edge and compteporary in the early 1960s, but now looks arcane yet honest:
"TABAC ORIGINAL Eau de Toilette is a modern fragrance with intensive lasting strength. Masculine, expressive, individual. A fragrance that underlines your personality" (quote taken from the back of the box for this fragrance).

Tabac Original also comes in a variety of shaving and grooming products such as a shaving soap and an after shave (on which I can not comment meaningfully, because try as I may, my beard never develops to more than a stubble, and the moustache I sport is limited to Movember's paper touché). But a glimpse into one of those vlogs makes shaving look like a rather sensual ritual that I will look forward to in my next incarnation, in which I hope to spend my entire days lathering soap and playing with the foam for hours on end.