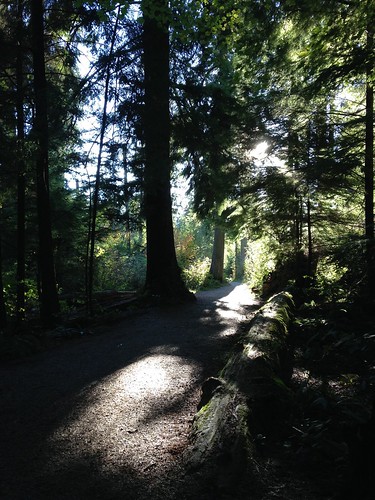 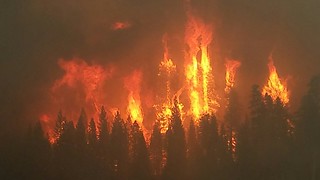 Wildfires all over the region have cast a dark smokescreen over what seemed to be endlessly blue skies. Now there's smoke everywhere. You can look the sun straight in the eye through it without squinting or blinking. It's just an ominous circle of orange-red.
The mountains to the north are invisible, one can't see anymore than just a few buildings away - not unlike a heavily foggy San Francisco-esque day. Except that now there is also a multitude of sensations added to the experience: yesterday as I drove back to the city after spending the day at Golden Ears provincial park, the smell of burning rainforest welcomed my nostrils like sacrificial incense of the most eerily delicious scent. The kind of joss-sticks that only God should be allowed to be lighting afire: entire old-growth Douglas fir and red cedar, burnt in their entirety, from the fragrantly sweet needles to the moss-covered twigs, branches, bark, heartwoods and all the way to the roots.
My eyes welled up with tears whenever I rolled down the window or stepped out again to realize this is not a bad dream. The mountain forests are burning. In some of my absolute favourite places here too, places I dreamed I would call home someday: Sechelt, Pemberton... By the time the ominous red sun has completely set, the smoke was so thick that my eyes were stung by this communal campfire of massive proportion. We were all walking the streets looking confused, unsettled, worried. Non of the cheery mood that accompanies intentional burning of cedar logs, and no marshmallows were roasted and no potatoes recovered from the embers and they were. Embarrassingly, I also have to admit I enjoyed that smell... If you want to get an idea of what that is like - dip scent strips in the following oils: red cedar, fir absolute and cade or birch tar.
The purpose of this post is not to whine about the smoke in the city (whose inhabitants like to complain about anything that slightly inconveniences us as far as weather goes). I know it is far worse than here where the fires are ablaze right now, and for days remain "contained at zero percent".  There simply have to be more measures to be taken seriously to both prevent and combat fires at such humongous scale. And I would be the first one to go up to those mountains and re-plant them with new forests.
I know how terrible it is, because my home village is amidst wild bush, and that gets easily set on fire - either by human error, carelessness or simple nasty intentions. There is an illegal pile of garbage to the east of the village, and as much as a glass that catches the sunlight or an idiot trowing a cigarette butt from a passing car on a day where the wind from the East is blowing - can start a bush fire, if not burn down entire houses to the ground. Which it did, back in June 1988.  Five homes were lost, and it took a huge toll on these families and the entire community to rebuild it. Seeing old trees we used to play under disappear forever, and the fire line stop only 2m away from my family's home was a tough sight to digest and we too many years to process it and heal. Only now, 27 years later, some of the carob and oak trees begin to look sorta similar to their former ancestors that graced the hills behind us, and the thorny bush populations is beginning to tone down a bit... We continually re-plant the hills  and wild areas in the village with more local wild trees, to help bring it back to what it used to be - or maybe even better. But that taste in my mouth of burnt bush dampened by water is one I would never forget. Nor will I forget the same heavy odour soaked into every nook and cranny in our home, every garment smelling like it for weeks on end, and the scorched hills and meadows a charcoal-black for years and years to come until, finally, new perennial vegetation revived.
I woke up this morning and the ancient-forest incense smell disappeared, and was replaced by the scent of fires that have had water poured all over them. I hope this means a good sign that the fire fighters are beginning to contain them and that this disaster will come to and end soon. But we can't be too optimistic:
The extreme drought conditions, unusual for our rainforest province, have reached a worrisome levels. There hasn't been a proper rain (typically we get at least one good dose of rain a week, even in the hottest months).  And now the worst predictions have been confirmed. There have been over 800 fires in British Columbia this year. So I ask you all to pray for rain to return to our rainforest, and for those of you who live here - please, oh please be more frugal with your water use! We can handle dry lawns and shorter showers; but this planet can't afford to lose its largest temperate forest, with one of the most diverse and productive biomass! Budding Cedar of Lebanon, a photo by Ayala Moriel on Flickr.
Last week I had the short-lived yet delightful opportunity to forage a minute amount of spring needle tips with my mom to use in teas.

Conifers were not made equal, and some were better suited for this purpose. Notably, Douglas fir and some types of spruce produces the most delightful young needles: tender like sprouting wheatgrass; and soft like a silky tassels. But of course what's most important is their aromatic and flavour profile: look for spring tips that have a delightful refreshing yet sweet aroma, reminiscent of lemon zest and tangerine peel and a breath of forest after rain.

How can you tell which ones to pick? If you don't know the specific species, use your senses to assess the tea potential of these spring forest buds. Rub them between your fingers and inhale. If the scent appeals to you, that's a good start. But what's most important is the taste. Don't hesitate to nibble on some (they should be soft and tender when you pick them, so don't worry about puncturing your cheeks...). If they taste acrid, dry and bitter - forget about them. If they are slightly tart, delicately aromatic and leave only very little dryness in your mouth this would also be your experience when you brew them into a tea.

The tips pictured above are of Cedar of Lebanon (taken at the Van Dusen Botanical Garden). These look pretty and feel soft; but don't have any of the qualities you'd want in a forest-foraged-tea. Below are Douglas fir spring needle tips. They are very short and require a lot of work to harvest; but their aroma is superb! And to boot, they are rich in vitamin C, which would be a wonderful supplement for your immune system in the spring or any time of the year. Once picked, spread the needle tips or "tassels" on a tray to thoroughly dry in the shade: away from light, heat and, of course, humidity. Once they are thoroughly dry, store in an airtight container and steep in boiling water to make a delicious, fragrant tea (1 tsp per 250ml) that can be served warm or chilled. Life Is A Struggle, a photo by Ayala Moriel on Flickr.
"When we are stricken and cannot bear our lives any longer, then a tree has something to say to us: Be still! Be still! Look at me! Life is not easy, life is not difficult. Those are childish thoughts. . . . Home is neither here nor there. Home is within you, or home is nowhere at all".
- Herman Hesse, Bäume: Betrachtungen und Gedichte [Trees: Reflections and Poems]


If your sense of belonging does not come easy, trailing alongside the trees gives a great lesson and a sense of proportion. A single tree in the rainforests provides oxygen supplies for a year for ten people - in only one season of its existence (Arbor Day Foundation).

"On average, one tree produces nearly 260 pounds of oxygen each year. Two mature trees can provide enough oxygen for a family of four" (Environment Canada).

As I walk by these ancient creatures of wisdom who've breathed the planet's toxins, listened to the every bird's song, and exhaled serenity and purified air for hundreds if not thousands of years --
I'm awed not only by their stature, but also by what they have silently witnessed, and above all - to their dedication to light and life.

Tutored as the "green lungs" of our blue planet,  we owe 28% of the oxygen we breathe to the rainforests and the trees. It is no wonder that trees have been sacred not only to the native Indians but even in more deserted climates such as the Middle East. There are trees who are worshipped, to this day, with colorful ribbons tied to their branches by pilgrims of religions long gone. It seems increasingly logical to make all trees sacred. Planting trees should become a common practice from young age...

There are 3 main trees in our beautiful Pacific Northwest forests: Douglas Fir (Pseudotsuga), Pacific Red Cedar (Thuja plicata) and Western Hemlock (Tsuga) and Sitka Spruce (Picea sitchensis). I'm still learning how to differentiate between them: they are all so big and often times their needles are so far out of reach that there is no way of examining their needles and comparing their shapes. And then the trees are young it's the opposite problem: you can see the needles, but the trunks are still quite similar in appearance (at least to my untrained eye). These amazing trees can live several hundreds and even well over 1,000 years!

So, as I struggle to find courage, motivation or inspiration between my 4 walls - I step out to my "back yard", breathe deeply - and try to listen to the trees.