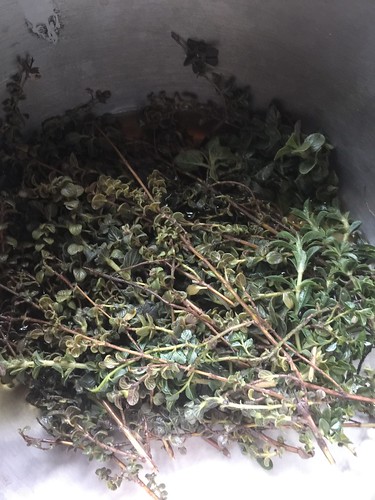 At long last, a new soap is made, and is available online: Za'atar - a melange of wild thyme and oregano from the mountain behind my home, and my garden. Properties; cleansing, disinfectant, anti fungal.

The za'atar soap I've been dreaming of making for 8 months now underwent many obstacles, including me not paying attention and charring the wild za'atar decoction meant for the lye (see image below). Moreover, when I finally made a decoction and that didn't scorch, it was a cold day, ad it took too long to trace and once added the essential oils it congealed too fast. The bars turned out fine but visually are not as consistent and pretty as they should have been - with a texture that shows pockets of oil. It has a fine za'atar smell, and works wonderfully like all my other soaps though. 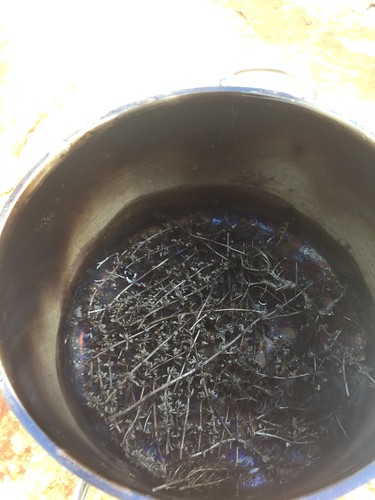 This limited edition soap bar is made from olive-oil and water infusions of various types of Za'atar - thymol and carvacrol rich plants that grow wild on the mountains around the southeast Mediterranean basin: Ezov/hyssop/wild oregano (Origanum syriacum), Winter Savory/Satureja (Satureja montana), Israeli Thyme (Corydothymus capitatus) and Mediterranean Thyme (Thymbra spicata), with the addition of cultivars grown in my garden, such as common oregano, marjoram and thyme. These infusions are used in all of the soap's phases, then supercharged with the aroma of wild oregano essential oil.

The result beautiful bar of soap, superfatted - which means it has wonderful moisturizing qualities due to high content of unsaponified oils within the formula. It is the same rich-lathering formula we've always had for our soaps, plus the healing properties of the wildcrafted herbs. 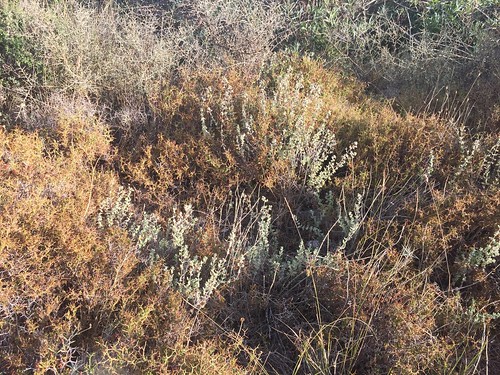 Among the locals, all the wild herbs mentioned above are called "za'atar interchangeably, even though the Origanum syriacum is the "real" za'atar. Because they are all rich in thymol and carvacrol, they have similar healing properties, strongly antiseptic (antibacterial and anti-fungal), and also help with various skin ailments (eczema in particular). And in other (non-skin-related) uses - most is drank as tea, primarily for digestive issues such as stomach aches, parasites and queasiness; generally used in oral hygiene, as well as curing headaches, earaches, colds and flu and respiratory complaints.

We're using olive oil that was cold-pressed from olive which were organically grown in a Druze village near Mt. Meron; Oganic virgin coconut oil (both are food grade), palm oil and castor oil for that extra emollient quality. The result is a hard, long-lasting bar with rich lather that is very moisturizing - a real treat for your skin, hair and even for shaving; and with the funky but lovable elecampane scent. 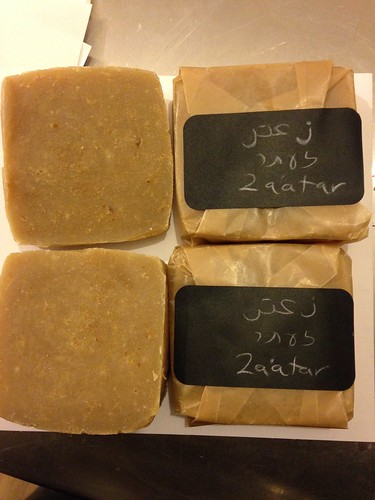