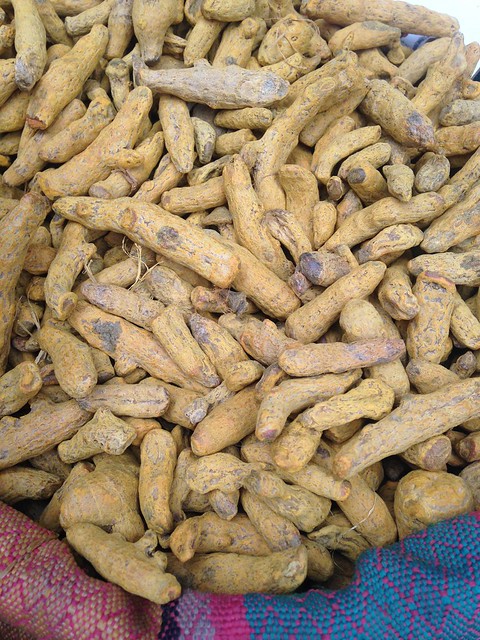 Turmeric (Curcuma longa/C. domestica), also known as Curcuma, Indian Saffron, Indian Yellow Root (not to be focused with American "Yellowroot", which is also sometimes called "Indian Turmeric" but is actually Hydrastis canadensis) or Amomoum Curcuma is a note not often found in Western perfumery, but it has such an important role in herbal medicine (particularly Ayurveda and traditional Chinese medicine), and it's hard to imagine many cuisines without its earthy flavour and bright yellow colour. All in all, turmeric's distinctive aroma is worth exploring on this blog. 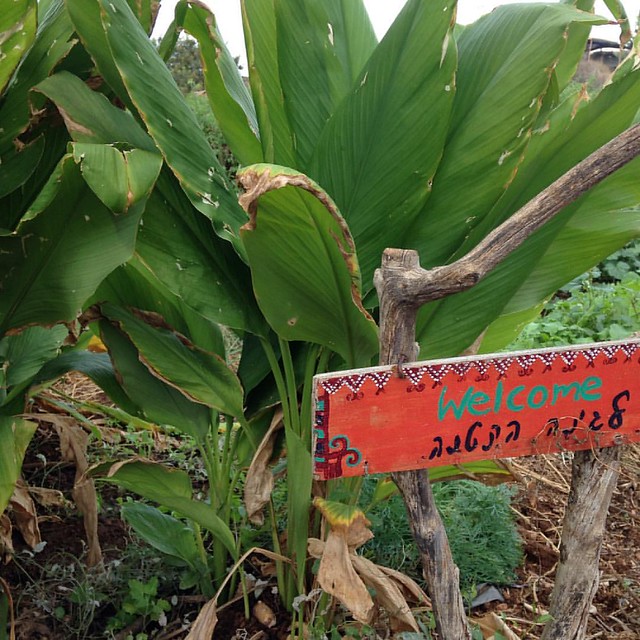 The plant belongs to the ginger, galangal and cardamom family, and like all of these, it has beautiful foliage and showy red-pink flowers that are arranged in an inflorescence, that grow wild in the jungles of Southeast Asia - and where cultivated, can make a garden look lusciously tropical. It can even grow in my home village - although with the nasty eastern winds that blow here many days feel bone dry here and the land is particularly parched this fall, many tropical plants and trees can grow here and produce delicious fruit and fragrant flowers. It does get a bit too cold in the winter, so it may be better for it to grow in a potted plant and be brought into a hothouse during the cooler months (November through March) and of course it will require plenty of watering to make up for the lack of monsoons in our region. I'm certainly going to add it to my little perfumer's botanical garden that I'm dreaming up these days... 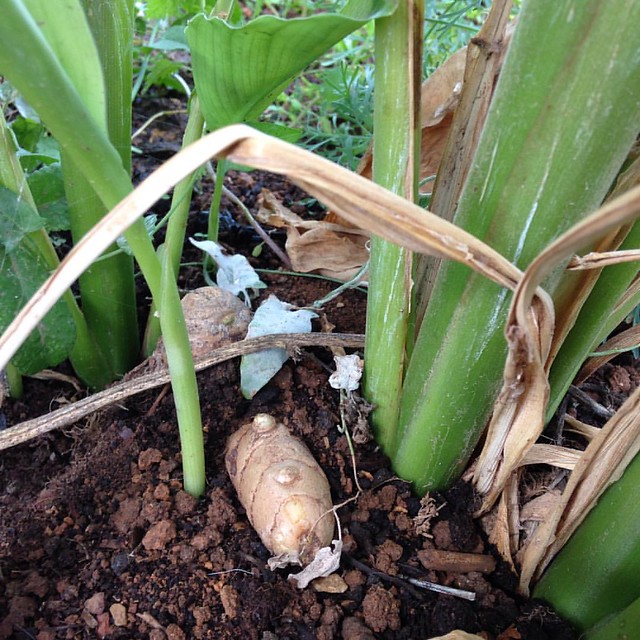 Constituents:
Turmeric is known for its high content of vitamin C and is rich in minerals [1]. It is especially valued for its effective anti-inflammatory properties of its unique constituent curcumin (diferuloylmethane), which also provides its distinctve  deep golden-yellow colour. A word of caution: watch out for turmeric that has an orange-red colour (or more of a red hue after coming into contact with liquid) - it is probably adulterated with lead oxide (!), and some turmeric powders are mixed with metanil yellow - AKA acid yellow 36, even though both are toxic and illegal.

Besides curcumin, turmeric contains two other curcuminoids: demethoxycurcumin and bisdemethoxycurcumin, as well as the constituents turmerone, atlantone, and zingiberene, which gives it an earthy, mellow, warm flavour.

Southern Seas Trading Co. in Vancouver sells a turmeric powder that claims to have 5% curcumin, and is really incomparable to the what you'd commonly find on the spice racks in most supermarkets or even in the souks. Too often, turmeric powder has a light yellow, almost sulfur-like colour, and has very little aroma, and taste almost like dust. That is usually a sign that it is probably too old. This is true, by the way, to many spices - if they've lost their vibrancy and "bite", they should be replaced by a fresh batch that has the characteristics you're after. Otherwise - what is the point of adding spices in the first place?!

Turmeric essential oil is clear orange-amber or "a yellowy-orange liquor with a faint blue fluorescence and a fresh spicy-woody odour" [1] with about 60% turmerone, ar-turmerone, atlantone, zingiberone, channel, borneo, sabinene, phellandrene and more. It's important to note that turmerone is a ketone, and is "moderately toxic and irritant in high concentration. Possible sensitization problems". [1]. Becomes semi-viscous over time. 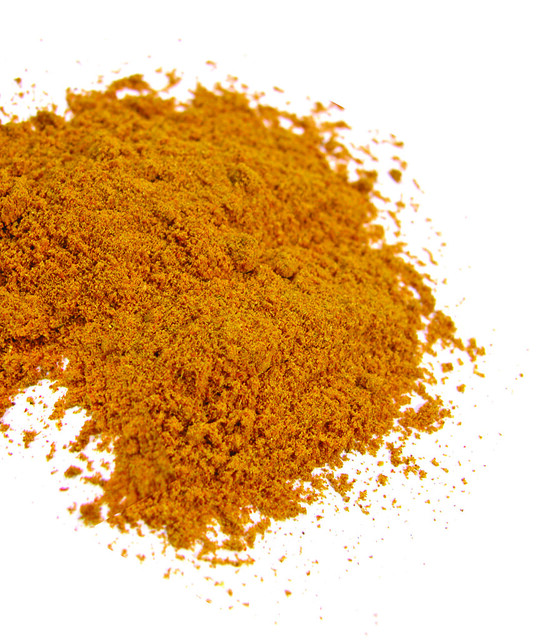 Turmeric as a dye and food colouring:
You've probably ate turmeric without even knowing it in your mustard paste and cucumber pickles (it is used to mask the unsightly fading that is inevitable on pickles that were sitting on the shelf too long). It also gives cauliflower pickles an exotic colour, and brings out the best in mango chutneys and pickles.

Additionally, turmeric can be used as a dye for clothing, although it has very poor lightfast qualities (it fades easily). The saffron-coloured robes that Buddhist monks wear are customarily dyed with turmeric powder. Turmeric is also used in various pastes and unguents that are used in religious rituals to decorate the buddha sculptures and mark the place of the "third eye".

Turmeric in savoury dishes:
In areas where turmeric is a native, fresh leaves are also used to wrap food with and impart their unique flavour to the dish. But in most of the world, it is the dried rhizomes (often referred to as "roots") that are used. In this form, turmeric found its way first through the spice caravans into Arabic cuisine, North Africa and Europe - and later on also to the Americas who in return contributed the heat of chilli peppers to spice blends and cooking traditions the world over.

It's hard to recall many East Indian dishes without turmeric, and indeed you'll find this amount or another in countless East Indian recipes, and in dishes alongside garam masala blends and also in the various blends that are called "curry powder" (mostly these are Western interpretations of various Southeast Asian spice blends) where it is mixed with fenugreek, cumin, coriander seed, and chilli pepper. Other ingredients are used to give it nuances and distinctive style that is usually proprietary, i.e.: dry ginger roots, fennel, cinnamon, cloves, asafoetida, various peppers (long, black...), cardamom (green or black), mustard, and more. Turmeric can be found in other spice blends, such as Ras El Hanout, hawaij (a Yemeni spice mixed usually created with turmeric, cumin, black pepper and cardamom - and in more complex styles also may include cloves, caraway, coriander, fenugreek, etc.).

Turmeric is an essential component of the famous Thai Massaman curry (Muslim-inspired curry), which gives it both its golden colour and mild, earthy note that complements beautifully vegetables such as cauliflower and potato. It is used to colour and flavour banh xao (Vietnamese savoury rice-flour crepes).

Cooking with fresh turmeric is one of the most sensually satisfying culinary encounters, taking off the dusty aspect of working with the ground, dried herb. I was fortunate to procure the mango-coloured root that was at the same exotic produce store I mentioned earlier in Granville Island at the time. The ones I've seen grown in Israel are pale in comparison, but still I recommend experimenting with them. they can be grated as they are to add to curry pastes, or peeled and minced or sliced and be added to stews, soups and even teas. Some swear it is even more effective than ginger in chasing away the season's flu. 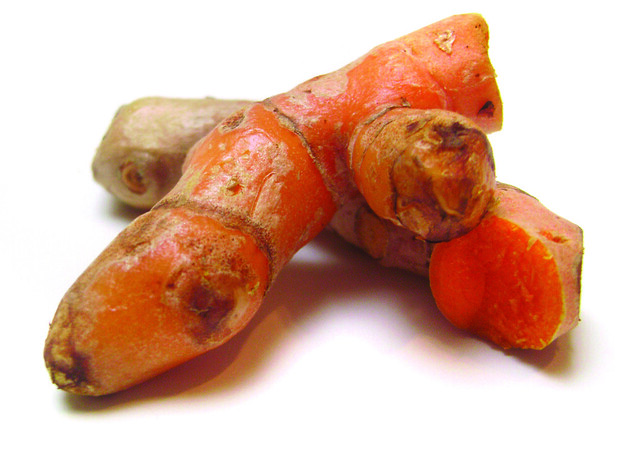 Turmeric in sweets, confections and pastries:
Turmeric leaves are used in preparations of sweets from the west coasts of India called patoleo, patoley or Pan Mori - turmeric-scented cakes of rice and grated coconut. These are offered to several Hindu feminine deities (Parvati, Ganesh) and are eaten in Hindu feasts, India's Independence Day (August 15) and also the Assumption of Mary which falls on the same day and is celebrated by the Catholics in the region.

The Lebanese semolina cake Sfouf has an interesting play on savoury and sweet, and imaginative playful texture. Its fine semolina dough is highly fragrant with powdered turmeric rhizome and incorporates savoury fenugreek seeds and decorated with pine nuts. And if this isn't making you curious yet - it is also  layered with tahini (sesame paste) on the bottom and drenched in honey syrup on the top, creating by default a layer of halva at the base.

Another interesting East-Meets-West fusion I've discovered in the souk of Akko, was no other than a very Eastern-European pastry of poppy seed roll, in which the sweet yeast dough was coloured and flavoured with turmeric. After many searches for a poppy seed roll that will satisfy our homesickness (there was a killer poppyseed roll in non other than the seemingly generic Maple Leaf bakery on Davie Street) - this is the closest thing to what we were after, and also great on its own right.

Turmeric in Flavouring Work:
Turmeric essential oil has rather limited use as a favouring agent, because the powder is usually used. Turmeric oil is bitter and slightly pungent, except in extreme dilutions.
The Japanese turmeric has a flavour that is more spicy, bitter and slightly burning.

Turmeric in Folk Medicine:
Turmeric was used by the Jews of India ground turmeric into powder and made a medicinal porridge with sugar to treat diarrhea. Yemeni Jews used curcuma to treat jaundice, headaches stomach aches and digestive complaints. Moroccan Jews made a remedy for jaundice by mixing parts of the plant with honey and consuming it. Persian Jews prepared a paste for massaging the feet by mixing curcuma powder with Arak (an anise liquor). The Jews of Babylon believed that eating dishes heavily seasonsed with curcuma will lift the spirits of anyone who is suffering from depression. [2]

Turmeric in Herbal Medicine and Aromatherapy:
Used for treatment of liver disease, stomach ulcers. For gustatory and digestive disturbances, brew 1 tsp of turmeric powder in boiled water for 5 minutes and sweeten with honey or sugar. For treatment of boils and severe warts, a paste of 50 g of turmeric powder blended with 15 mL (3 Tbs) of olive oil can be spread on the affected area.

Turmeric oil is used to treat inflammatory conditions such as arthritis and rheumatism as well muscular aches and pains. It is also helpful in anorexia, liver convention and sluggish digestion. 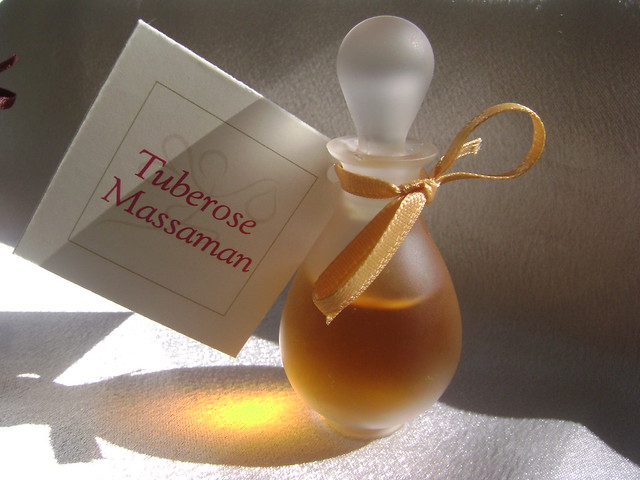 Odour Profile:
Earthy, mineral, vibrant, subtle, spicy, fresh, with strong association to baked vegetables and potato and cauliflower curries. Has a certain sourness to it, tangy with hints of sweet orange, ginger and galangal notes. Root-like qualities, with some woody notes and slightly green note (this aspect has reminiscence to the sesame plant).

As mentioned earlier, the use of turmeric is rather limited. Aside from my own work with it, I can't recall smelling it in too many perfumes, and I can only guess it may be a note in Santal de Mysore, as well as some natural perfumes I've experienced such as the now defunct Rose by Scent Systems and Aftelier's Parfum de Maroc. I've incorporated it in successfully in my "Massaman Curry" accord, which I've used in Tuberose Massaman OOAK perfume. There is also a hint of turmeric in another OOAK perfume titled "Curry Rose". I got to admit it worked well with these florals, echoing the buttery mystery of tuberose that is underlined but tuberous moistness; and also giving an earthiness for the rose to grow on.
Some of you may have also experienced some of my trials for an oud perfume that includes copious amounts of it - Assam Oud. In the latter, I've been greatly struggling with finding the balance between the elements, and the turmeric seemed to create a problem - constantly bringing out a sourness from the tagetes (marigold) which I was not fond of. It was a frustrating experience, but not one I am giving up on. There will be an Assam Oud perfume eventually for more of you to enjoy, and I am determined to find a way for the turmeric to work in there. There simply is something haunting and earthy about turmeric that I really want to mingle with agarwood's musty earthiness.