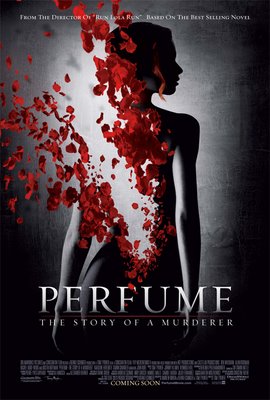 To celebrate the long-awaited release of the film “Perfume: The Story of a Murderer” this January, SmellyBlog is running a contest: comment below on what you have thought of the book, and why you liked or didn’t like it, and enter to win one of 10 double-passes to the pre-screenings in Vancouver and Toronto, on January 3rd and 4th!
When you post your comment, please mention if you are from Vancouver or Toronto, as we will be running two separate draws.

Let all your friends who live in the Greater Vancouver or Greater Toronto area know about this contest and refer them to SmellyBlog!

The 10 lucky winners of the movie tickets will also win a $25 coupon towards their next purchase at Ayala Moriel Parfums.

Tune in for more special announcements re the release of this unusual film. There are more suprises to come in January next year, and if you live in Vancouver and Toronto you shouldn't miss them!

Below is the unofficial film review of yours truly, who was fortunate enough to watch it before most Canadians - just two nights ago in Vancouver. The official release date in Canada is January 5th 2006.
Back to the top