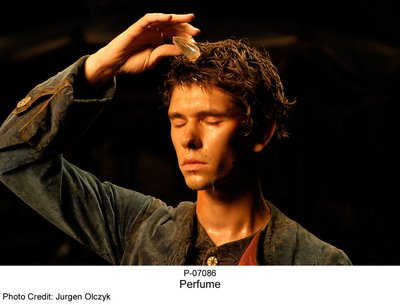 “Perfume: The Story of a Murderer” was quite a difficult book for me to read. Not so much because of the subject, which on the surface is quite objectionable, but rather because I found the book, particularly the first part, to be exhaustively descriptive. To top it off, it’s impossible to identify with the (anti) hero: Jean-Baptiste Grenuille is detached, emotionless not-quite-human character, and basically lacks in all the areas that could possibly make another human being feel sympathy. His constant suffering does not make one feel more for him in the least; even his thirst for fragrance and his obsession with creating the perfect perfume seems excessive to the point of loosing most of its meaning, as it is so exquisitely detached from the human emotions that most people associate with scents. Grenuille is described in the book, more than once, as a tick. And throughout the book, there is not one moment when I managed to have more feelings towards him than I do towards a blood-sucking tick.

The film, however, was everything I hoped it would be, yet without taking away from the concept of the book. What before was an exhausting and linear storytelling filled to the brim with scent descriptions, was now appropriately replaced with accurate images so tactile that you can feel and smell them. Whomever said the book was unfilmable, was obviously wrong. Thanks to skillful screenwriting (by Director Tom Tykwer, and screenwriters Anrew Birkin and Bernd Eichinger) , the film plays in a far more convincing way than does the book. The exposition is laid out intensely to illustrate a rich odorous world with all its magnificent nuances: from the stench of the fish market, where Grenuille is mistakably born, through myriads of mundane odours, to the coiffed, powdered wigs and fine perfumes of the ear. 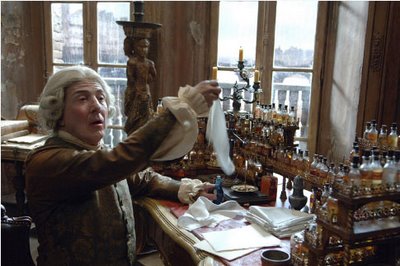 The casting is excellent for the most part, and the acting is outstanding. Ben Whishaw, even if a tad too handsome for what anyone could imagine Grenuille to be*, is brilliant in portraying the odd outcast sociopath with no scent of his own yet an incredible gift for discerning and remembering scents, which leads him to become a perfumer. He manages to pull off the character truthfully, and at the same time also raise just enough empathy in the audience to make his motives understandable and almost logic. His love for scent and his raw passion to acquire the ability to preserve it comes through clearly, and dictates a flowing cinematic storytelling, assisted by sparse narration. We are just as bewitched as he is with the striking fragrant beauty of the maiden (Karoline Herthfurth) that became the muse who haunts him for the rest of his pathetic life. 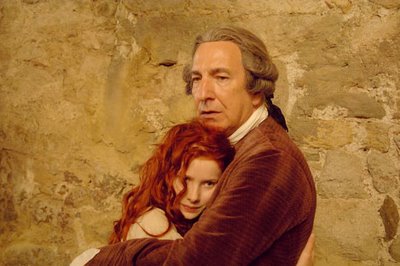 In his role as Maestro Baldini, Dustin Hoffman’s performance adds a much needed humour and human swarmth to the film, and also creates a bridge to Grenuille’s mind and to understanding his motives later on. Alan Rickman is perfectly casted for Monsieur Richis, Laure’s father (her name is Enlighized to Laura in the movie, and she is played by the appropriately teenager actress Rachel Hurd-Wood), the man who unveils Grenuille’s murder scheme, contributes a heart-trembling performance with his usual tragic presence and expressive voice.

From a perfumer’s point of view, some of the scenes are a nosewatering eye candy: the antique perfumery of Maestro Baldini, with all the beakers and vials and elimbics and flacons and flasks; Even his supposedly-boring lecture about the Egyptians and the 12 essences and the 13th secrete essence is intriguing for a perfumer staring at the screen…(and, it niely reduces his number of Grenuille’s victims from 26 to a mere 14…) And of course - that feature Grasse (which to us, by the way, is the Mecca of Perfume, rather than the Rome…) – from flower harvesting to enflourage (the image below is enflourage of jonquilles), maceration and distillation. If you are a perfumer, this film will make you want to visit there more than ever, so perhaps you should reserve your airline tickets before you reserve your seat at your neighbourhood cinema… 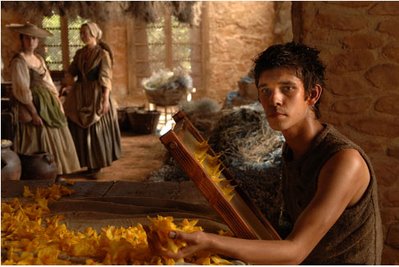 By the end of the film I could visualize the 13 essences used for the perfume and almost forget the horror that was required to extract them. And of course, the metaphor of robbing the scent from flowers to make our perfumes, as they gradually die in their sleep, still echoes in my head till now…

The only thing I was worried about was the ending. In the book, this is the only point of true redemption for our hero Grenuille. As much as one might buy into believing that the perfect perfume will redeem him from his cursed state of un-love, it is not until he is devoured by his own people that he becomes part of them. And I am utterly grateful that the film ended that way. The only thing missing from that scent was a burp…

*Grenuille the child though is a total miscast, even if played extremely well; look at Alvaro Roque in the eye, and try to tell me you don't like him. His skin looks too healthy and dark to be Grenuille the grown up serial killer. He looks almost like the charming Italian boy from Cinema Paradiso, for heaven's sake!

**Stills from the film courtesy of Paramount Pictures and from IMDB.com. To view more photos, including a fantastic panoramic views from the set (my favourites, naturally, being the perfumeries), visit the film's official website.