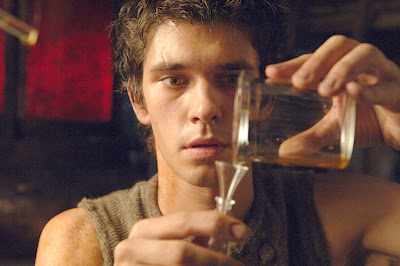 The following are a few tips for watching the movie “Perfume: A Story of a Murderer”, one being perfume related, and the other not so much so.

I most highly recommend wearing no perfume at all to the theatre, so that you can focus all your imagination on the olfactory world described in the film. This is what I did and it was quite fabulous. On the other hand, my scent-abstinence during the film was wildly shattered by the most bizarre experience in public set-up, (surpassed only by another peculiar event last Thursday, when I noticed a lady exposing her breasts for her date - and me, who happened to sit right in front of her - in an elegant candle-lit restaurant): in the middle of the film, and I can’t remember which part it was, someone in the audience suddenly remember that s/he forgot to put on perfume this evening. This must have been of utter importance, because s/he responded to that by spraying on a lethal dose of Poison. Even though she sat somewhere in the middle of the audience (while I was sitting on the side), this was extremely distracting and disturbing. I managed to block it off after a while and continue to enjoy the film. But I can assure you that even if you love perfume, and feel you have the right to wear it to the movies – be sure to put it on at least half an hour before you enter the theatre. Especially if you are going to a movie that is trying so hard to send an olfactory message to the audience.

As I said, I was fortunate to sit very far away from the Poison, which brings me to the next point: I was not seated in the best place in the theatre, which is a shame. If you want to experience the film to its fullest, arrive as early as you can to find a good spot. Preferable right in front of the screen. This way you will enjoy to its fullest the tactile filming style and the olfactory imagination it will trigger in you.

Lastly, I do recommend you read the book first, if you can (even though, as I mentioned earlier, I did enjoy the film much more; the second part of the book is particularly important to read in my opinion). Films cannot possibly cover an entire book to all its details, and some of the most entertaining ones from the second part of the book did not make it to the film (which did not really take away from the story, essentially). Some of the descriptions of perfume making are quite fascinating, and philosophical (especially from a perfumer’s point of view). But most importantly – if you are not a horror-movie fan, this will help you to be able to watch the film and all the bizarre moments and not get completely scared or grossed out. We all know that it’s the anticipation that creates the unbearable suspence in a film. And when it comes to serial killings, I am usually quite sensitive to that. But, because I already knew what to expect I could enjoy the film’s quirky beauty without getting my stomach turned (and, that is to add, I managed to watch the movie like a big girl, with a couple of friends, and without a boyfriend in sight to squeeze his hands in the scary parts…). The fear would have been a distraction from enjoying the film. For me, that is.

Don’t forget to leave a comment either for this post or for the film review, and mention which city you are from – Toronto or Vancouver – so you will be entered into the draw and win a double pass to the Premieres in those cities! And don't forget to tell all your friends from Toronto and Vancouver about it either. The winners will also receive a $25 coupon for Ayala Moriel Parfums.

Tune in for more special posts regarding the book and the movie, and also some special events to come in early January!
Back to the top