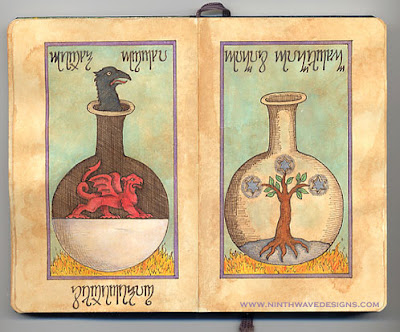 As some of you may know, my former perfume house name was Quinta Essentia. This name reflected the basis for my interest in perfumery, which was Alchemy. Alchemy was a metaphysical science and art that started long ago, most likely by the Arabs, and which gained further depths and interest in the West during Medieval times.
Although some of it may seem fictional and unreasonable, Alchemy has much more influence on the development of the West than anyone could ever imagine. While the ancient alchemist were searching for their “Philosopher’s Stone” and the “Fountain of Youth” they found a lot of things that soon became the basis for modern science – and chemistry in particular. The Philosopher’s Stone was an object – fictional or physical – that was believed to turn everything into gold. Now, to an outsider, who is not familiar with alchemy, this seems like the most naïve of all quests, and in fact completely silly. But before we judge this, we need to find out what “gold” really meant.

There were two branches in alchemy – Silver Alchemy and Gold Alchemy.
Seemingly, Gold Alchemy dealt with minerals and elements. This was the quest for distilling the “gold” form all matter. However, to the Gold Alchemist, the real quest was distilling the true essence of being. For a modern Westerner, this can be translated into “self-fulfillment”, “self-improvement”, and in essence – becoming the best person that you could possibly be.

The alchemists work was a secret art that they have masked in their writing in codes, symbols and terms that seems completely fictional and fantastic. If you open ancient alchemy text books, you will find descriptions of the “Green Lion”, the “Black Dragon”, as well as reference to other magical animals such as phoenix and unicorns. These usually refer to the different stages of the distillation process, but they also symbolize different stages in the process of a person’s spiritual development.

Silver Alchemy was considered a lesser branch of Alchemy. It dealt with plants and herbs and organic matter, from which the alchemist tried to distill silver. In the process, what they achieved was the first essential oils. And it is thanks to the alchemists that we are now able to enjoy essential oils and make perfumes.

Alcemy is, in fact a metaphor for our personal growth and spiritual development. The 5 elements (the 5th one being “spirit” or the “quintessence”), the 7 ancient planets and the 12 Zodiac signs played a key role in explaining the universe around us and gaining a deeper understanding of our inner self.

My initial interest in perfumery started in my interest in alchemy. Each of the elements, planets and zodiac signs had connections and affiliations with plants and herbs and resins, and a special incense could be used in order to invoke different energies to create a balance – or an imbalance - in the student of alchemy. Balance was the main goal though, as it was believed to be the ideal state. All the unbalanced stages (i.e.: the Black Dragon) are only but steps in the process of achieving the balance.

And so I started developing incense for different elements and planets. I soon realized that most of the materials (except for resins and several woods) smelled horrible when burnt. And so I decided to start learning how to make perfumes that require no burning – liquid perfumes, based in alcohol or a carrier oil. And that is how my perfume house was born.

Image: Tree of Stars and Crow from the Alchemy Notebook by NinthWavesDesigns
For more links related to the same artist:
Ninth Wave Designs Blog
NinthWaveDesigns.com