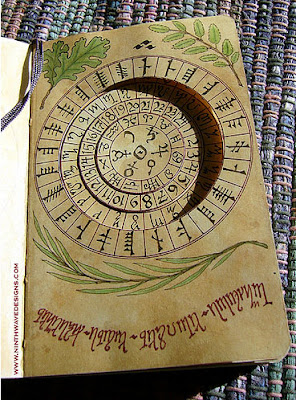 I knew this was coming for quite some time now. While the sales of all my other fragrance lines are getting increasingly higher - the sales rates of my zodiac perfume line has been always pathetically low. I will have to discontinue this line as soon as the current stock for each of the fragrances runs out.

The good news is that they will still be available for special order, in full bottles only, as well as crème parfum. I have made a decision to never truly discontinue a perfume, unless its building blocks become unavailable (which is beyond my control). When a perfume is discontinued, I still have the formula and am able to produce it in small quantities – one bottle at a time – to those who are still fascinated by it. Samples are the main thing that will be affected by it: there will be none. When the scent is not in stock anymore, I will not mix another batch just to sell samples. I will only do so for full bottle orders.

The Zodiac Perfumes are all gorgeous and very unusual. In fact, they deserve a lot more attention than they are getting. Each perfume is a complete perfume, which was originally designed as an anointing-type oil for meditation and personal enjoyment, or as a perfume salve or a balm, encased in the silver pendant. They are rich, sensual, unusual, individualistic – and represent the special energies of each Zodiac sign.

The reasons why these are not doing well have very little to do with how they smell, but rather with marketing. I am sure that if they were made of less expensive oils and were sold for under $20 in a head-shop/health-food store/esoteric book store - they would have sold like fresh hot buns. Unfortunately, I lacked that marketing visionary when I designed them, and wanting to stay true to the spirit of the alchemists – chose some rare essences, some of which quite highly priced. The compositions are often unusual and non-traditional when looked at from a perfumer’s point of view. To top it all off - their esoteric titles seem to drive most people away. The ones who could afford them, anyways. Many think that astrology is nonsense (which it may or may not be; I hold the belief that if it helps people to understand themselves better – by studying one’s natal chart – than perhaps there is enough truth in astrology to at least pay attention to it; not to mention then long and rich cultural history behind that ancient system).

Only little is known about how these were the first perfumes that I have created, and more so - the amount of fascination, love, research and work that went into developing this line. So now that we are saying goodbye to them forever (unless you special-order them), I would like to dedicate a few words for each of my Zodiac Perfumes.

Aries
The first of the zodiac signs happens to also be my own sun sign (though truly I am on the cusp between Pisces and Aries). Aries symbolizes the head and the beginning, and is very firey yet reasonable (a quality that is probably associated with Aries being a Cardinal sign – which is equivablent to the alchemical principle of salt, or earth). The essences that were chosen to represent Aries in this perfume are also associated with its ruling planet, Mars, as well as the element of Fire:
Tobacco, musk, opoponax, rose geranium, cinnamon, black pepper, xantoxylum, blood orange and lime.

Taurus
Stubborn and determined as a bull is the sign of Taurus. It is also a sign of beauty and strength. Taurus is an Earth sign ruled by Venus. Being a fixed sign it is also associated with Air to some extent (hence the use of the bit of lavender) or the principle of sulphur. The oils chosen are earthy and representing the abundance and beauty of earth: Vanilla, benzoin, patchouli, rose otto and absolute, clementine, lavender and palmarosa.

Gemini
The mercurial, ever-changing qualities of this dual sign are a cheerful mystery. This sign is ruled by Mercury and is an Air sign and also a mutable sign (which is associated with the ever-changing qualities of water or the principle of mercury). Gemini’s bubbly and energetic energy is here represented by the citrusy delights of lemongrass, listea cubeba and lemon balm are all mercurial in nature – and the woodsy notes of agarwood, sandalwood and the musky notes of spikenard are representing the airy nature of the sign.

Cancer
Similarly to Geminie, this mysterious water sign has an interesting duality. While Geminie presents the “two faces” of the “twins”, Cancer presents the challenging existence of an individual’s inner vs. outer world. The outer side of the Cancer is like that of a crab’s shell – hard and protective. Inside, like the crab’s soft flesh, lay the vulnerable secrets and inner world. Cancer is rule by the moon, and is a cardinal sign (which may give it some stability with all those changeable, fluctuating qualities of moon and water!). The essences I chose to use in Cancer Perfume are quite unusual: the base is amber, as a remote reference to the ambergris of the sea, patchouli for a grounded warmth, and the lunar jasmine notes at the heart. But what makes it really unusual is the addition of both anise and camphor (also lunar and watery in quality), which add a mystique and an intriguing ambivalence of cool/warm effect.

Leo
Powerful and glorious like the Sun – Leo is projecting abundance of energy, light and warmth. It is known for its will power and strength. This Fire sign is ruled by the Sun, and being a fixed sign it is also affiliated with Air and with the principle of Sulphur. I chose essences that are both warm and generous and tha project a golden, glowing energy for Leo Perfume: the fruitiness of neroli and the golden-delicious apple aroma of Roman chamomile, along with golden frankincense, vanilla, rose and cinnamon.

Virgo
The virtues of Virgo are modesty and hard work – also marked by an extreme tediousness and attention to detail. Virgo is an Earth sign, but being ruled by the planet of Mercury and being a mutable sign it one of the least stable signs of the element, and perhaps also the most cerebral. I originally formulated this with narcissus, but recently changed the formulation so that the earthy qualities are represented by rose and magnolia and myrrh. The mercurial qualities are represented by mastic, cardamom, fennel and sparkling citrus notes of Clementine and yuzu.

Libra
The sign of beauty, harmony, peace, balance and justice. Libra is a cardinal Air sign, ruled by Venus. It was very difficult for me to make a Libra perfume that is not feminine – and it turned out to be quite florl, with tuberose as the key element. When I first made it, I didn’t know enough about natural materials, and I had an exquisite (though synthetic in part) sweet pea oil which I used at the heart. Now it is gone, and it is purely natural. There is no sweet pea note, but the combination of tuberose, rose, tonka bean, sandalwood, benzoin and Clementine is delicate and sublime. The tonka accounts for that slightly bitter-almond like flavour that is not unlike sweet peas.

Scorpio
Scropio is the most firey water sign of all. If Cancer is the deep wide ocean with all of its tides and waves, and Pisces is a bubbling brook – than Scorpio is a deep, dark lake in the throat of a lava-mountain, bubbling with heat deep down. Scorpio signifies transformation, and therefore, the essence of lotus is particularly fitting for this perfume. Lotus being a beautiful, pure and fragrant, sacred flower that rises from the dirty swamps of decay and darkness. Other essences in Scorpio Perfume were chose for their asociation with Mars and the warlike qualities it represents: opoponax, choya loban (burnt benzoin), black pepper and blood orange. I also chose tuberose for its intensity and for supporting the fragility of the lotus flower.

Sagittarius
Sagiattrius is a special Fire sign – it’s mutable (which is a watery, mercurial quality), and therefore may seem less forceful than the other firey signs. Sagittarius is associate with traveling, mystery and wisdom. Sagittarius is ruled by Jupiter.
This is another oil I had difficulties designing. Originally, I created two – one which was “masculine” - foresty, and included angelica root (my least favourite ingrnedient – perhaps the only building block I really need to “work on” and stop avoiding!). The other was “feminine”, with notes of champaca, carnation and star anise. Recently (a couple of years ago) I decided to integrate my favourite elements of each perfumes, and create just one Sagittarius scent. This turned to be my favourite and the best of the all: fir absolute, black tea, spikenard, champaca, carnation, rose, nutme, mace and star anise make it an unconventional but utterly loveable.

Carpricorn
Being a cardinal earth sign, Capricorn is perhaps the most earthy of all earth signs. It is known for its stability and resilience in the face of all adversities on earth. Capricorn is ruled by the severity of the planet of Saturn. The essences I chose are grounding and earthy, but also sweet and comforting, and glorious in an earthy way: myrrh, patchouli, vetiver, rose, magnolia, neroli, cedar and mimosa.

Aquarius
Aquarius has an airy, cerebral, philosophical energy. Metaphorically speaking, Aquarius sign symbolizes the ideal of mankind, and has the role of a teacher. It was particularly difficult to construct this perfume, because most of the essences associated with Aquarius are very airy and most of them already made an entrance in the other perfumes. I chose essences that regretfully I am no longer able to obtain – including hyacinth. And so, this will be the last batch of its kind. It includes, besides hyacinths, sweet neroli, an abundance of the ethereal rosewood essence, light and airy lavender oil, elemi, sandalwood, myrrh and frankincense. For the next batch I will be replacing the haycinth with linden blossom. This will certainly change the scent, but not the essence of the perfume – which is light and heady (but not in an overpowering floral way) – just a little less sweet than it is now.

Pisces
If water means change, than Pisces is the epitome of water. It is changeable and mutable and lively like a cheerful little fish swimming in the brook – sometimes upstream, perhaps… Pisces is intuitive, spiritual, sensitive and emotional. Like Sagittarius, it is ruled by Jupiter.
The essences I chose for Pisces are moist and mossy, and being the end of the cycle are not unlike the decaying of leaves in the forest, on which new vegetation will strive.
Oakmoss, seaweed, amber, juniper, jasmine, lotus and sage make Pisces a simple yet interesting Chypre composition that has salty undertones.

The different Zodiac perfumes don’t just exist on their own, but also as a collection or a "cycle": There are relationships that occur inbetween them all. Most of the perfumes have a note or two that continues from the previous and carry on to the next in the cycle. Also, Zodiacs that are ruled by the same plantes or elements will have often at least one not in common. For instance: black pepper in both Scorpio and Aries; Rose geranium in both Aries and Taurus (the Zodiac sign that follows), and so on.

As I said, these are being discontinued, so you will no longer be able to obtain a sample as soon as the current stock is gone. The 10ml roll-on bottles are now on special at $95 (instead of the original price of $130). They are very concentrated and come in a hand-painted bottle with their matching alchemical Zodiac symbol. For more details, visit our Blowout Sale page, or email me to order.