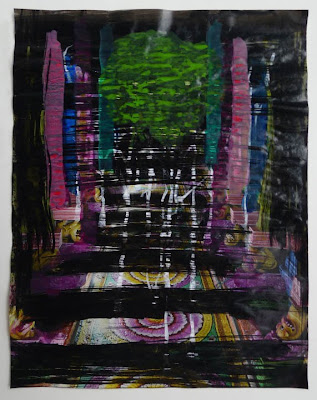 Lampblack by Bruno Fazzolari
Every evening before sunset, the preparations for the lightless hours commenced: father would fill the lamps with petroleum, trim the wicks and replace the spent ones; and mother would clean the soot off the fragile mouth-blown glass shields with a round bottle-brush. This job had to be done well ahead of time to ensure they are completely dry. Failure to do so would result of the glass exploding into shreds once the heat of the flame kisses the damp glass.

This is how I grew up, in the dim light to do the homework to in contrast to the blasting Mediterranean sun. Moths and fireflies will gather around the lamps and candles, often sacrificing their tiny lives by getting too close to the light... If you were too light-greedy by raised the flaming wick - the exact opposite result will be achieved: would  too much soot will collect rapidly on the glass, blocking the light and create more work for the next day...

One day technology arrived at my home village in the form of solar-power, and the petroleum lamps and all those little strange mundane details of electric-free life were almost forgotten... Until I encountered Bruno Fazzolari, a visual and perfume artist as well as an art educator - and his new perfume collection of 5 fragrances with the eponymous title. I instantly fell for two out of the five, and learned that the soot collecting on such lamps has a name, and is also the most ancient of all pigments: Lampblack.

Petroleum lamp, a photo by MrsFaraway on Flickr.
Lampblack is not an isolated perfume - it was debuted as part of an art show at Gallery Paule Anglim in San Francisco, alongside a series of Exploring the relationship between art and perfume is a controversial and difficult subject (for many reasons I feel should be the topic of another post) and it's both exciting and encouraging to see an artist taking the risk and seriously pursuing the challenge.

Lampblack pigment is not simply black - but also possesses brownish or blue background hues that might show more clearly to the untrained eye after the colour fades a bit. It's a very versatile pigment - and is used to create India Ink, as well as black water colour and oil paints.

The primal, basic nature of lampblack pigment appeals to me. There is something very straight forward about it; yet also a mystery. It connects the innate need to tell a story through the ages - on cave walls or the Metro station.

Lampblack perfume encompasses that connection: it has some very prehistoric elements such as the smokiness of nagramotha (cyperus, a relative of vetiver that has an almost tar-like scent that is not unlike petroleum at its pure state); an ink-like quality that makes one think of the cold steel from which bridges are built. Strangely enough, it also reminds me of a visit to a fisher's docks in Haifa in elementary schools, when we were shown a cephalopod and the ink that comes out of it. There was a salty, metallic scent in the air of a rainy winter day, the rusty ships and wet wooden docks.

Upon application, Lampblack possesses an abstract yet familiar freshness merged with woodsy and mineral elements: sulfuric grapefruit, flint-like black pepper and woodsy sandalwood and vetiver. Quickly, a turpentine-like smokiness of nagramotha interferes with the agreeable opening, and an abstract array of molecules that bring to mind ink and minerals. Underneath it, if you listen carefully, there's a quiet jasmine note peaking through the rather angular structure, echoing the "fruity magentas" and splashes of yellow that are peaking through the buoyant spills of thick India ink in the artist's painting - but perhaps it's the other way around. Powdery benzoin mellows out the dryness of the woods, suave and absorbent like rough watercolour paper.

Lampblack perfume and the entire collection of 5 can be purchased directly from the artist's Edition webpage, or via his Etsy shop.
Back to the top