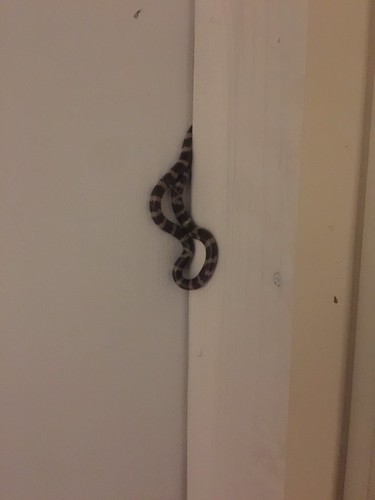 About fortnight ago, a night before starting my two-weeks of teaching perfumery courses, I was blessed with an unexpected visitor: An unrecognizable snake.
Fear got the worst of me. I grew up here and know that there is only one poisonous snake around, and exactly how it looks (a viper). However, I wasn't around for many, many years and with climate change - who knows, maybe a colourful desert snake decided to migrate to the Galilee?!
The striking colours of the snake made me especially frightened (usually they are a warning sign for danger). And also the fact that it got into my home and was coming out of a very narrow crack between the door's frame and the wall (as you can clearly see in the photo). I immediately snapped the photo and sent to my family, and called my brother to come and help me out. He got here so quickly, without even checking the photo, and in the meantime - the snake started to move. Which frightened the hell out of me... So I quietly and swiftly came up with a murder plan and started whacking the snake with a metal dustpan I use for clearing the ashes out of the wood stove.

By the time my brother arrived, I was already convinced I killed the snake. And he sadly told me this is an erdviper, in Hebrew מחרוזן דו-גוני או מחרוזן הטבעות, AKA Müller's black-headed snake (Micrelaps muelleri). It is not dangerous to people (although it does have venom, but in it's back teeth - so it's very rare to get fully bitten by it). It's a snake that is only active at night, when it would go hunting for various bugs, spiders, mice and smaller snakes, and spends the days under rocks. Being more comfortable handling reptiles than I am, he picked the snake and discovered it is actually still alive. He released it in the garden, at first the snake did not move much but then crawled away and was never seen again.

This encounter left me shaken and with many mixed feelings. First of all feeling very guilty that I injured this snake. Then also very perplexed and surprised about the powerful, visceral fear I felt finding a snake in my home. Then about the degree of aggression I was willing to perform against a creature I don't know anything about but was so mistakenly convinced could endanger me and my family. It got me thinking about many things - human aggression in general, and how powerful our defence mechanisms are that could push us to do horrible things. This seemed especially relevant for this time of instability and violence in the Middle East. We need to all do some serious work overcoming our fears and learning how to be more rational and less defensive. This is only possible by building more trust with our neighbours, both human and animal, and getting to know them better. When you know something you can't be afraid of it. At least not as much as I was that night.
Back to the top