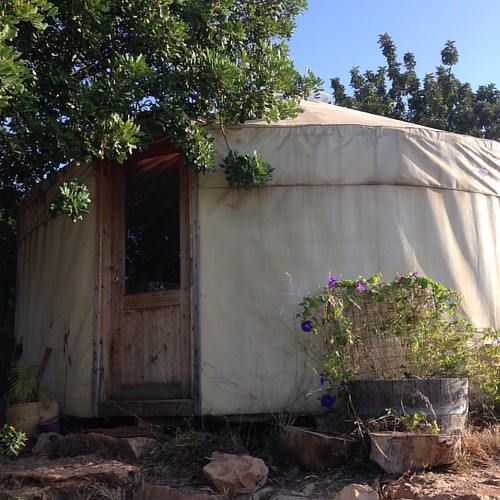 While waiting for our permanent home to be renovated (which, as it turns out, takes even longer than building a new home) - we've been living semi-nomadic life for close to four months now, about three of them in a yurt.

Life in the yurt is different. There is no way around it (pun intended). For one thing, it provides a round space, that encompasses most of life's functions in one area: cooking, eating, reading, puzzling, snuggling, cat-feeding (an extra duty we've picked up on the way to freedom - not unlike an unwanted pregnancy that you just can't get herself to terminate), office work (whenever my MacBook Air has enough power to work for me - not to mention its battered battery now needs replacement, which turns out to be a HUGE ordeal in the land of milk and honey), Pilates practice, and even occasional entertaining (when it rains even my dear family avoids it like the plague). It's not truly all in one space, because it actually has an annex to the north, with the washroom (including a shower and a compost toilet - a killer combination for dirt and cleanliness), as well as a sleeping den which has beautiful greenery all around it, as it is built from old wooden windows.

That beauty comes with the price of this space being as cold as the outdoors in the winter. In the summer this room is actually a lifesaver, because the yurt collects way too much heat, although it is much better insulated than the sleeping den - even when its skylight is open. We don't have an oven, but were able to pull together delicious and nourishing meals from the two-flamed gas stove, and have even prepared some raw treats for our daily tea parties. To be perfectly frank - mostly, we've been lazy and buying baklava and cookies whenever we are in the vicinity of a bakery - so I am now in the know of where to get good baked goods. I'm sure this knowledge will come in handy in the not so far future, even after we're back to our productive baking life. When it comes to baking, it's always good to have a good back-up plan.

Of course, that did not stop us from being experimental in the kitchen, trying new ingredients such as nigella seed spread and authentic freekeh, which is an amazing way of preparing green wheatberries by burning them off the wheat chaff. The result is a smoky, nutty grain that is delicious and easy to cook (and digest) and really gives unmistakable character to dishes (the one I bought in Canada was actually stale wheat dyed green). More on that in another post!

To sum it up - living in a yurt is "an experience". Just like camping is an experience. In camping terms this is a five star facility. I'm sure with its running water and gas-operated refrigerator it is also considered a luxury in comparison to straw huts in Africa or yurts in the Mongolian steppes. You get the picture. It's an experience. And we're three months into it and can't wait to experience something else.

To lift the edge off the nervous anticipation for proper housing, I've decided to compile a little list of fragrances (both mundane and wearable) that will let you into this experience, even if just a little... This compilation is a random array of fragrance fit for yurt life, even though I imagine most people who choose to live in this humble abode would rather dab some animal fat and cooked cabbage juice behind their ear than any designer's fragrance. Nevertheless, I find the task amusing, and I hope it will make for a fun read. 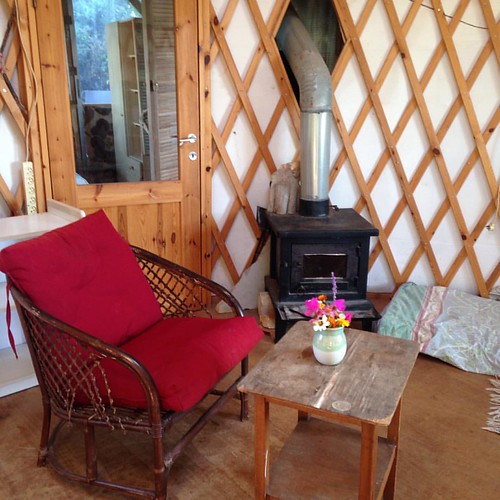 I also hope that my mom does not get hurt because apparently in our parts of the world, patience ("Savlanut") is considered a virtue (which very few uphold), and also belongs grammatical to the same root as the word suffering ("Sevel"). And in this part of the world, stating the facts is considered complaining... I'm sure those who choose to live in a yurt or even just stay in it for a short amount of time will thoroughly enjoy it - it is cute, rustic, pretty, calm and completely in tune with nature. You get to experience all the elements - fire (sun), air (wind), water (we have running water, and thankfully also very little of water leakage despite its very temporary feel); and last but not least - you can't get any closer to earth than this. It is a very, very earthy dwelling and you really feel Mother earth's belly as you tickle it with your slippers walking to and fro. Last but not least: nothing compares to coming out of the yurt at night and seeing the clear black skies dotted with bright stars.

Kiehl's Fig Leaf & Sage - milky herbacous weirdness. It's unusual yet very easy to wear and has a freshness without being boring. It also goes well with the cucumber and parsley scented products we currently have in the house - hand wash, shampoo and conditioner. Something green and clear-smelling yet non pretentious.

Aromatics Elixir - an earthy, big sage scent that is sophisticated yet at the same time rustic enough to wear in the wilderness. Especially grateful for it on cold wintry days.

Arabie - the spice market, sweat and dusty cobblestones - and all the spices I have in storage (and don't have in my kitchen) kvetched into one bottle. Awesome.

Coco Noir - the opposite of yurt life: polished, elegant, artificial and urban. Jasmine, berries and plums, rose, patchouli, musk and vetiver with a a dusting of cocoa.

Poivre Samarkand - because I heard that there are also yurts in Samarkand (Uzbekistan). Can't find any perfume inspired by Mongolia (which is where the yurts supposedly originate). Besides, it's a perfect sprinkle of heat on those chilly nights when the shower runs only boiling water or ice cold ones, and when you step out of the shower it's the same temperatures as outside (not as extreme as in Canada, but 5-11c is cold enough to feel like real winter).

Musc Nomade (Annick Goutal) - I'm picking this one because of the name alone. I remember smelling it very vaguely and that is was vegetal and delicate... Admittedly I'm also too lazy to go digging in my shipping container now and find the little box where I "filed" all my music samples but I'm pretty sure I've only tried it once when I was in Paris.

Tam Dao - if you've ever encountered compost toilet, you know that it's the human equivalent of hamster cage. pine or cedar shavings are used to cover up the mess, and the result is a more subdued version of human waste, that eventually turns into a nice scent of the forest floor. Anyway, this explanation made me think of Tam Dao, which is a fine sandalwood and cedar fragrance and also has some clean smelling musks underneath, to make you forget all the other business.

Tea for Two - We've been enjoying my limited selection of teas that I make a point of finishing off. True to form, we've been brewing lots of chai, which I've been already giving you plenty of recipes for... And of course Hulnejan - the wonderful root brew of galangal, dried ginger and cassia bark.
Zangvil also reminds me of this "witch brew" with its notes of fresh and dried ginger, honey, amber, jasmine and ginger lily.

Finjan - we've been drinking lots of espresso on the stove top mocha machine, and lots of Arabic/Druze/Turkish coffee (each nationality claims it as their own - but essentially this is very dark roasted coffee with cardamom that is brewed on the stove). The latter is well represented in the perfuem I created titled Finjan (the name of the little porcelain "shot" cups that you sip the coffee from; mistakenly, most Israelis refer to the little pot used to brew it as "finjan" - but its real name is "Ralai").

Mastic - Whenever it rains or gets really chilly, the mastica bushes and wild ivy behind the yurt release their fresh, green-balsamic scent. Grin's smell encompasses this verdant freshness with its notes of galbanum, violet, oakmoss and a classic floral bouquet.

Geranium and Wild Oranges - My citrus orchard was overcome by wild orange shoots, and I've really let it go. We finally pruned the orchard this fall, which mean an overwhelming amount of wild oranges that had to be put into use somehow. The result? An orange cello with a touch of herbs from the yurt's garden, among them rose geranium. One sip of this liquor is enough to uplift the spirits.