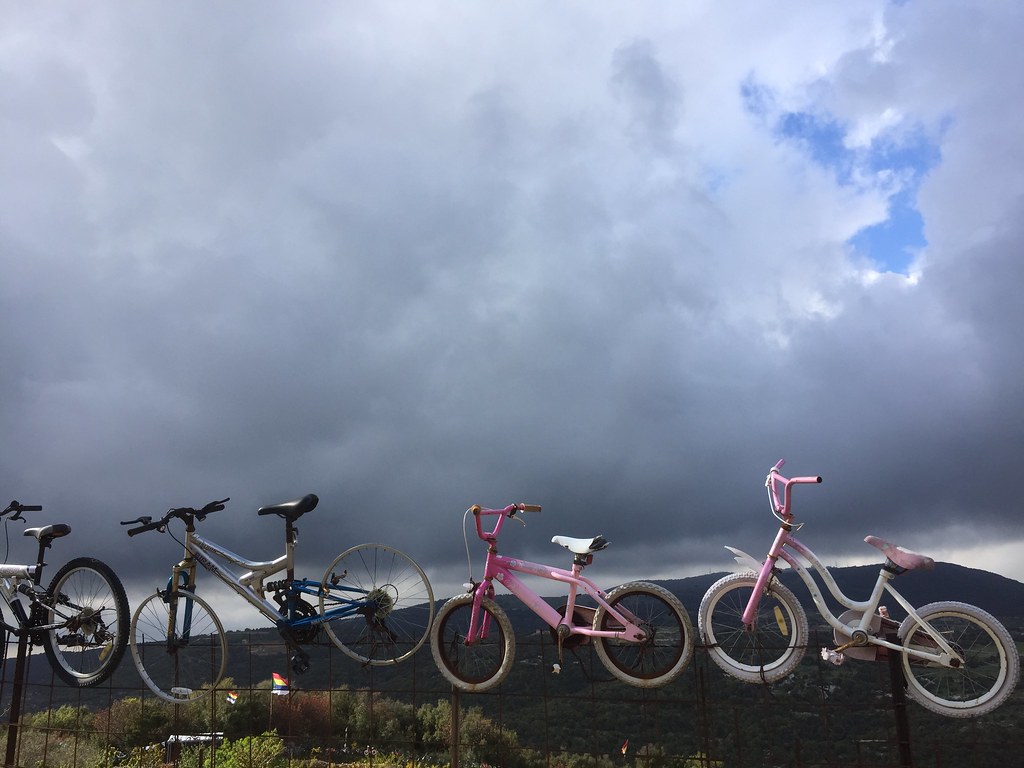 A couple of weeks ago we went to hunt for wild peonies, and found many new orchids along the trail. I also spotted a few tall orchids that weren't in bloom yet, so today I went back to spot them. And I present to you the whole series. Perhaps this is not the place for this post, as non of them is fragrant. Amon gate Israeli orchids, only the Holy Orchid (Orchis sancta) that is extremely rare (and I didn't meet yet) and the Scented Orchid (which smells like dung) have smell. I'll let the photos speak for themselves.

I'll start with the first orchid I met on the trail (note the many Anatolian Orchids behind it): 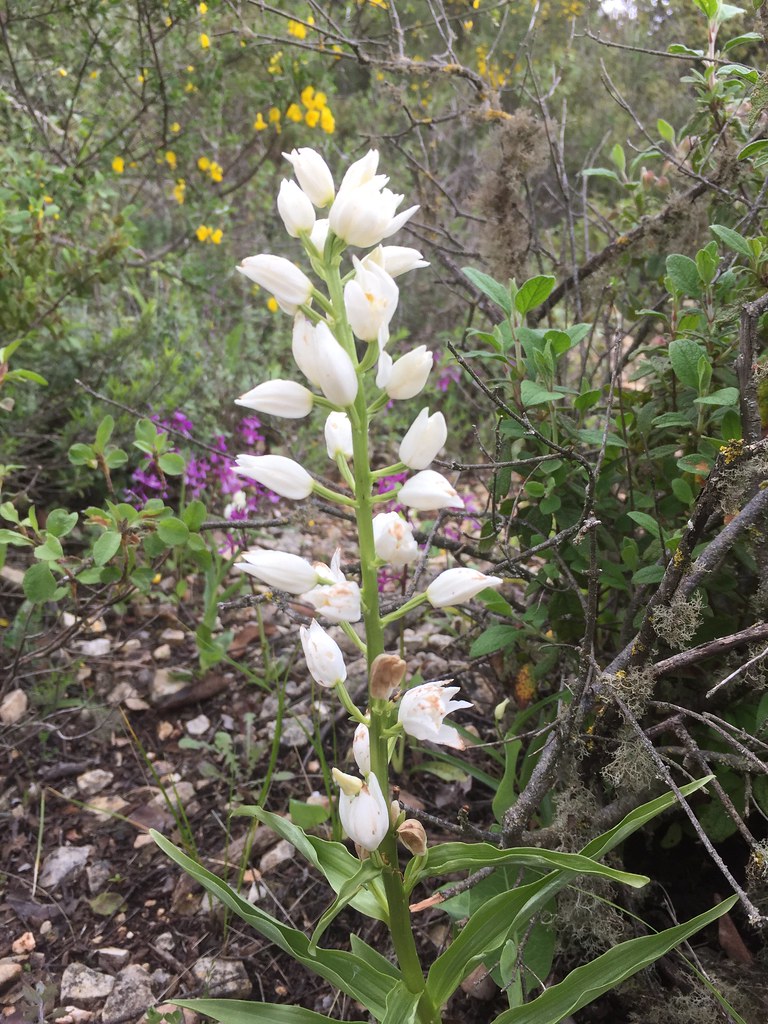 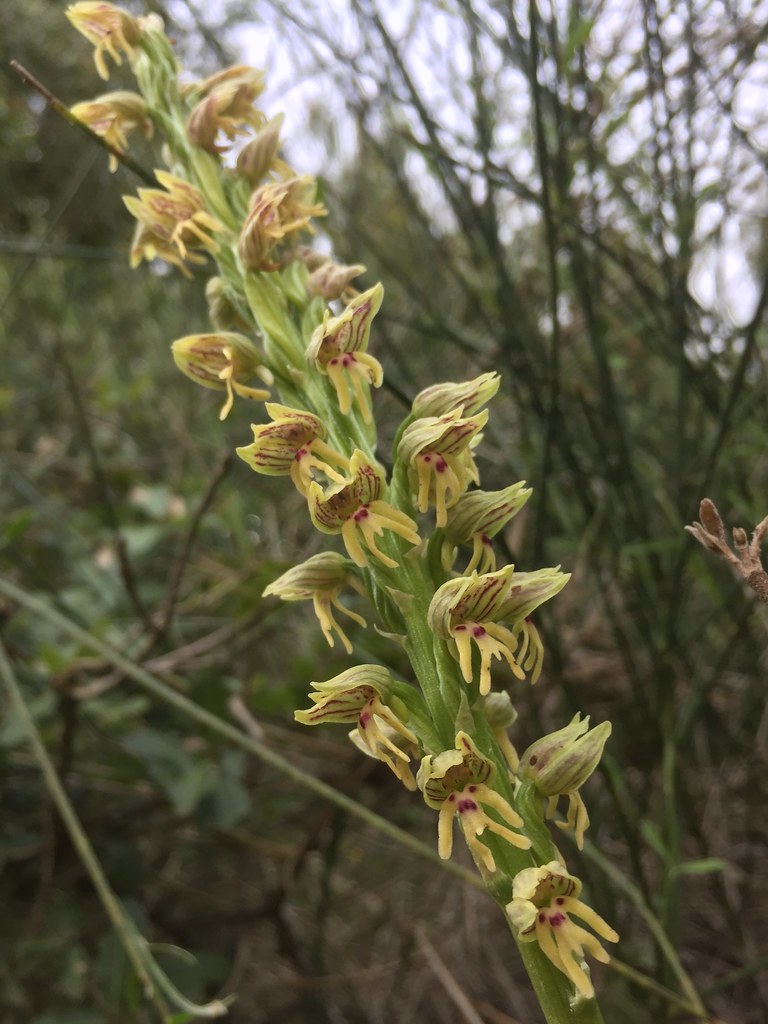 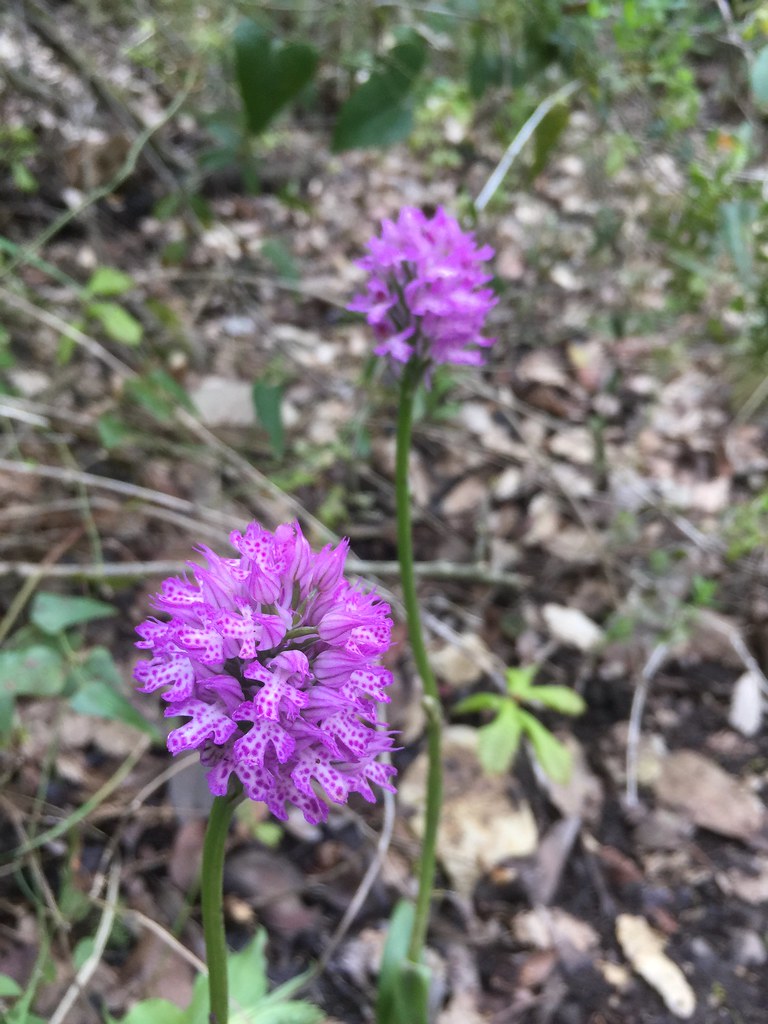 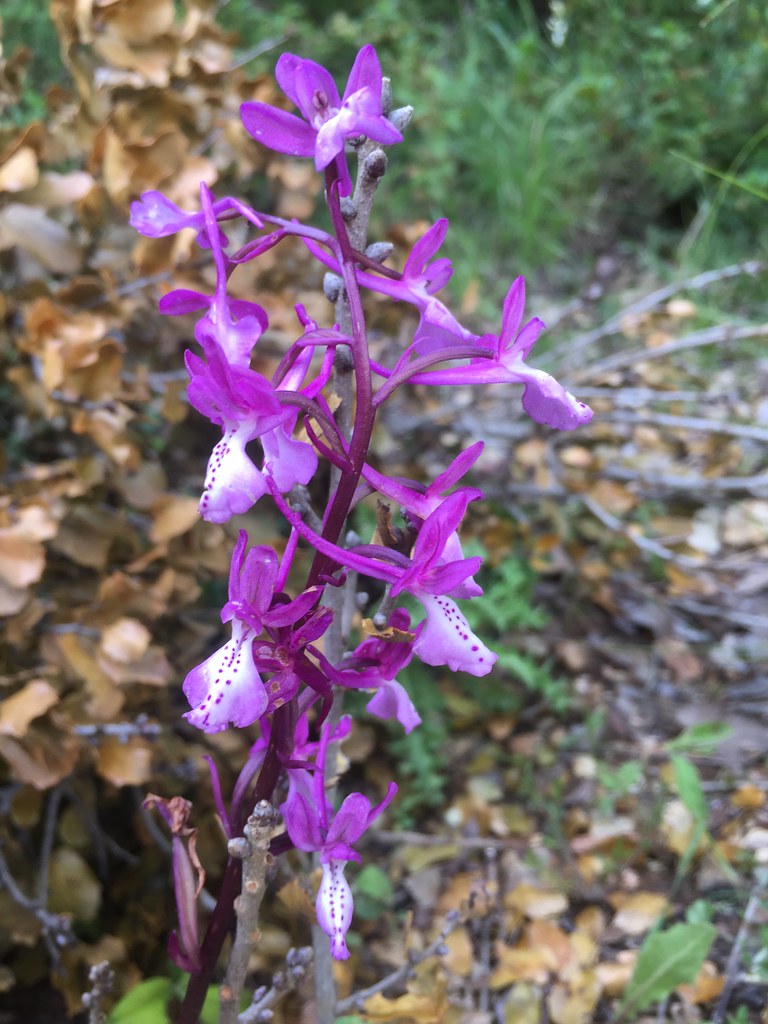 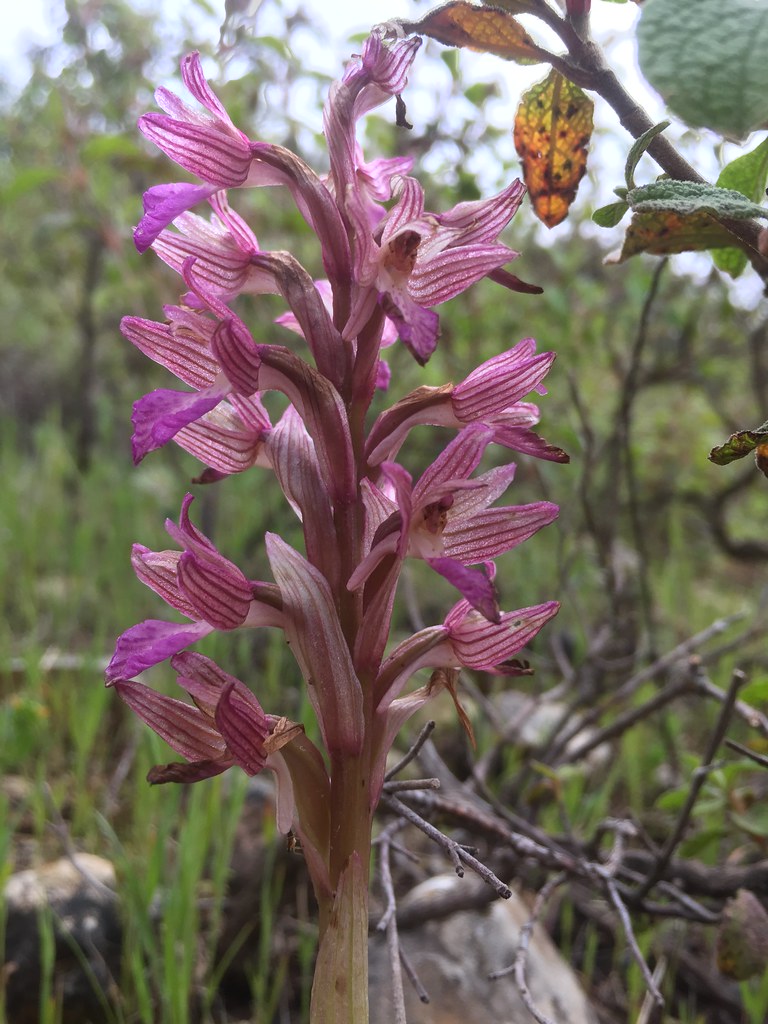 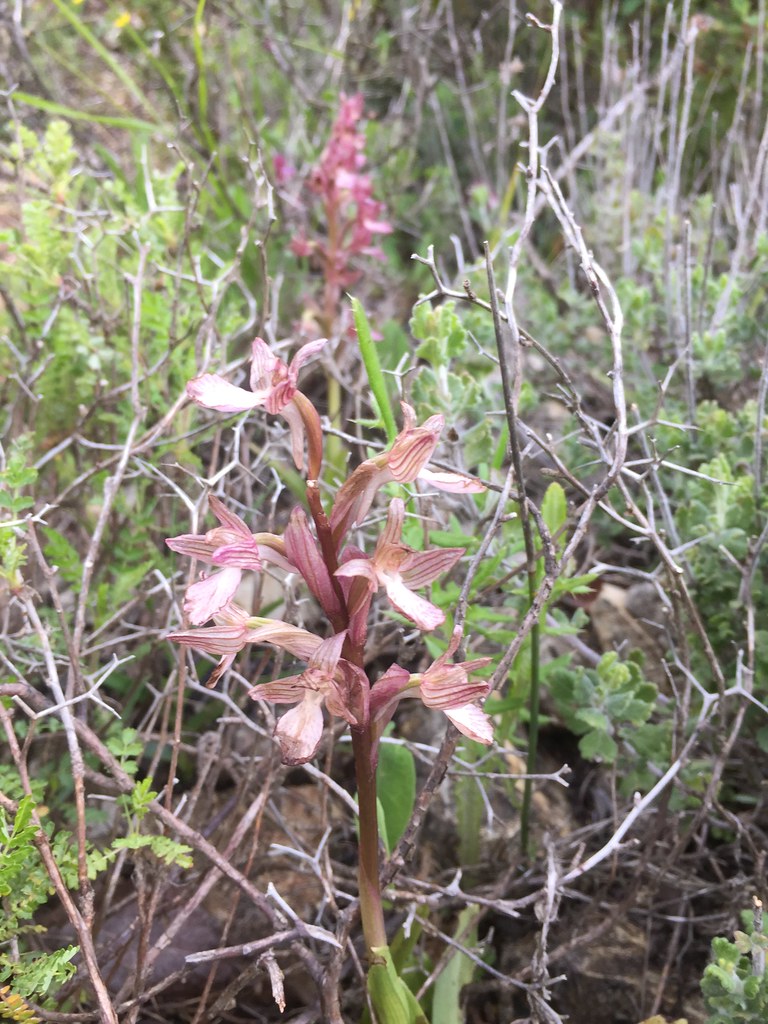 Orchis papilionacea  סחלב פרפרני
This is the same as above but perhaps older and therefore less vibrant in colour. 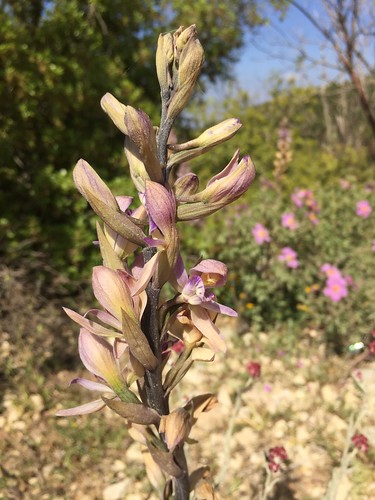 Limodorum abortivum (Violet Limodore) שנק החורש
This is the one I spotted about to bloom a couple of weeks ago, and came back to see today. It was already starting to dry out, but still - you can get the picture. It's a very tall orchid. Note how it compares to the rockrose (cistus) and blood helichrysum next to it: 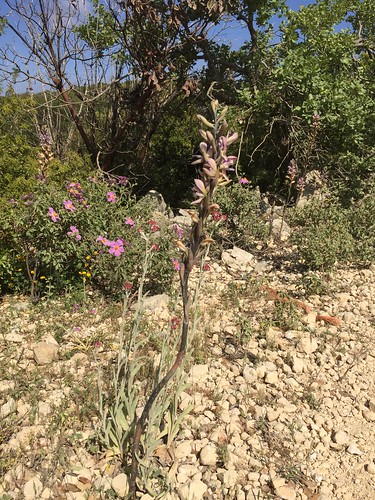 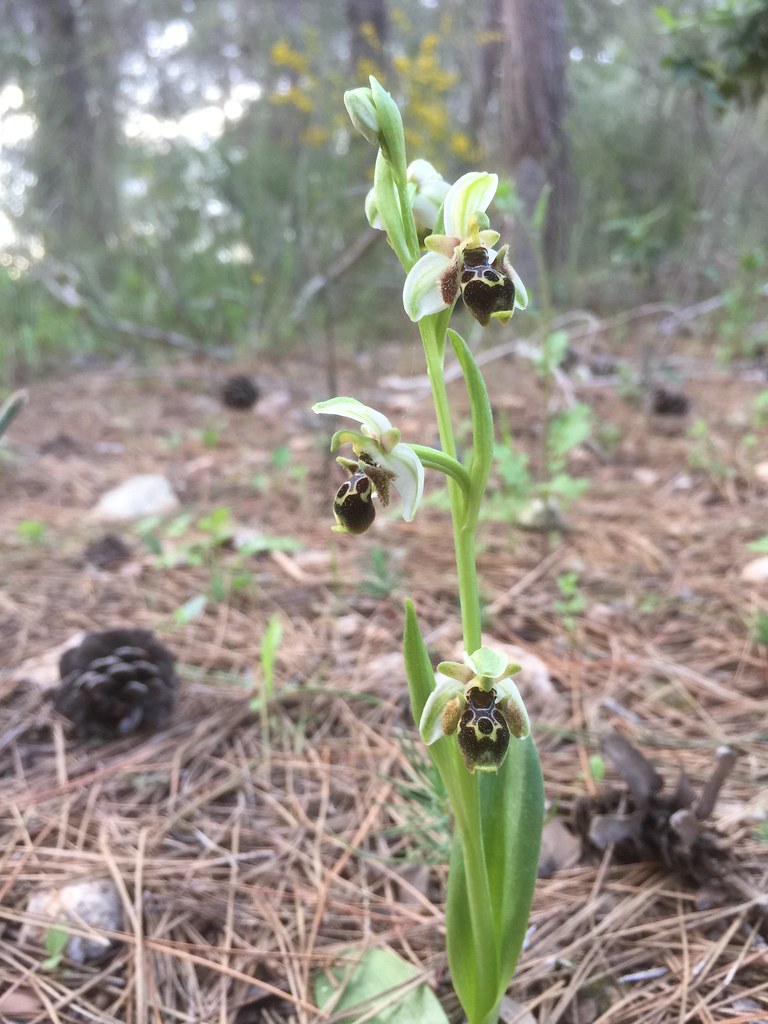 Ophrys umblicata דבורנית דינסמור
This last photo was not photographed on Mt. Hillel but I found another one and didn't bother to take a photo (was saving camera space for the peonies!). There are several other kinds of bee orchids in Israel, here is another one just for fun: 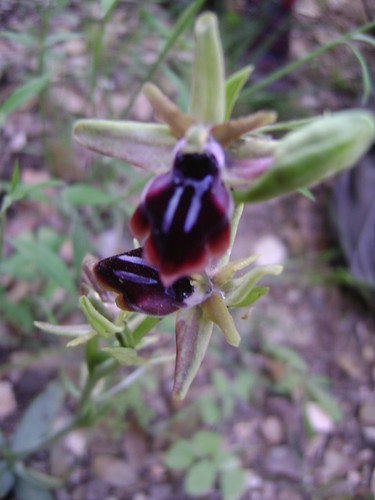 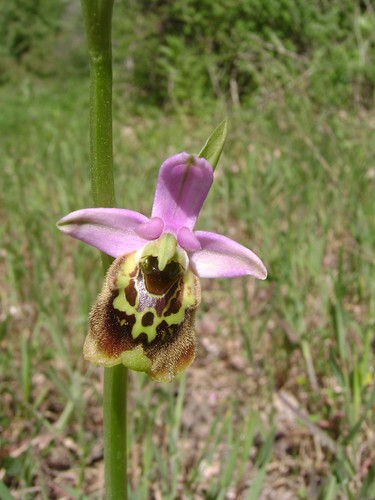 The following are also not found on the same site, but are part of my imaginary orchid collection nevertheless. 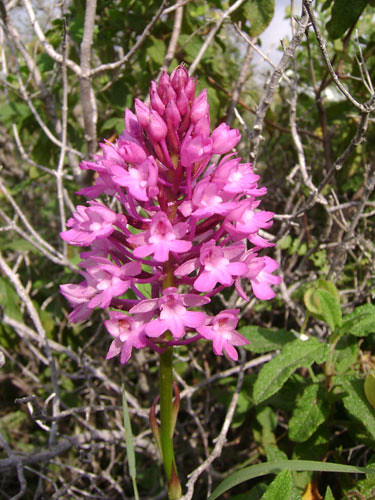 This one is relatively common in our area (lower altitude). I think this its rhizomes are the original ingredient of the Sahleb pudding. 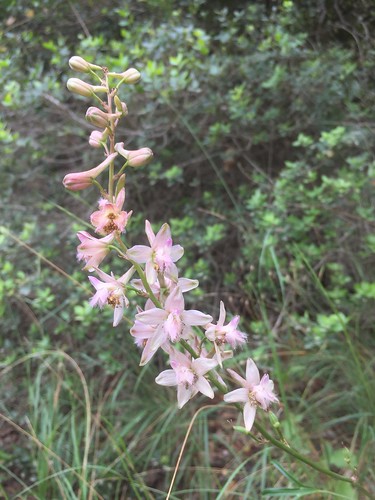 This lovely one I could not for the life of me identified. Spotted in Kziv Creek reserve, along the same trail that has the Wild Lilies. I would love to learn which one it is!

Take a guess: Where was this picture taken?

Here's another hint, from the same place:


Whistler? Vancouver Island? Oregon Coast?
Not even close!
I'll give you another visual hint:

Oaks plus moss plus fogs - must be Northern California?

Non of it! These photos (and the ones to follow) were all taken on Mount Meron in Israel. This is one of the most luscious spots in the country, as the mountain blocks the rainclouds from the Mediterranean, thus keeping for itself 900mm of precipitation annually. Just a little more to the east from Mout Meron, the Eastern Galillee rapidly becomes about as dry as a desert, leading all the way to the Sea of Galilee, which is surrounded by rather dry, barren and rocky mountains.

The mountain has a very round shape, like a mound, elevation of 1,208m. The mountain also has a religious significance, as the tomb of Rabi Shimon Bar Yochai is burried there with his son, Rabbi Elazar ben Shimon. Rabbi Shimon was a disciple of Rabbi Akiva - one of the most influential rabbis at the times of the Roman invasion (right after the ruining of the 2nd temple) and beyond. He was executed by the Romans, who did not allow the Jewish people to practice their religion; and Rabbi Shimon  and his son both had the same fate awaiting them - so they hid in a cave near Peki'in (a village in the Eastern Galilee - now mostly inhabited by Druze people). They lived there for 12 years, getting their nourishment from a well and a carob tree at the entrance to the cave, and dedicated their entire time to study the Torah and it is also said that this is when Rabbi Shimon has written the Zohar - the mystical book that is the foundation for the Kabbalah (Jewish Mysticism). Although the authorship of the Zohar is historically questionable, it is certain that Rabbi Shimon's significant influence on the Kabbalah and the much later Hassidic movement is with his assertion that the intent behind performing or observing the Mitzvot (Jewish laws) is of utter importance - the internal motive, not just the outer actions need to be observed. This is very unusual for Judasim, which is fundamentally a religion of laws and deeds, and doesn't quite tell people what to think or believe in, jsut what to do... In celebration of his life, every year at the anniversary of his passing in Lag BaOmer, Hassidic people particularly from Safed and the entire country make a pilgrimage there, lighting bonfires and giving their 3 years old sons their first haircut and celebrate Rabbi Shimon Bar Yochai's spiritual legacy.

On the slightly overcast morning of March 25th, 2014, I set to hike on this beautiful mountain with my energetic teenaged daughter. The original route (suggested by my tour guide brother Yotam) as we originally were supposed to meet my other brother and his 3 young kids. We were supposed to drive all the way to the peak and walk on a circular trail called "The Peak Trail" which surrounds the military base at the top of the mountain. I stopped on the entrance to the nature reserve, and saw a sign leading to the peak. Even though the surrounding did not match my brother's description whatsoever, I set on the trail. Which turned out to be everything but an easy 1 hour stroll around the peak... We had enough food, water and first aid supplies to last for a whole day, so I was not worried and even when I suspected we were on the wrong trail, we just kept climbing the mountain.

At first, we were walking up through many shady oak trees. There was no sign of any of the rare spring wild flowers my brother raved about, and I must admit I was a tad disappointed. But after about 20 minutes of hiking, there was a bit of a clearing the landscape changed ever so slightly, to include some arbutus trees (in bloom, as pictured above - with little honeyed white flowers, reminiscent of linden, mimosa and araucaria), as well as more open patches of rocky earth. That's where I spotted the first pink orchid (probably an Anatolian Orchid). I was so excited I snapped a few closeups... But later on this little orchid turned out to be the most common seasonal wild flower on the mountain - so much there there were entire meadows of it!

We kept climbing up and up, reaching a sort of a plateau and marveling at the impressively tall Cedars of Lebanon (pictured at the beginning of the post), until we reached a little resting area built of rocks, and facing the west. We sat down to eat our lunch (we were already hiking for an hour then, and it was getting later then I planned). We bought sambusac on the way - a Druze flatbread that is baked in open fire taboon and is filled with various delicious condiments - labneh (yogurt cheese), za'atar (mixture of wild hyssop, sumac and sesame), and kishek (a condiment made of roasted peppers and walnuts). All were still piping hot from the fire! We were not even halfway through lunch, when all of a sudden I felt a cool tickle on my bare arms. Before I even registered what was going on, grey clouds gathered from the west, and we were at the midst of a thunderstorm! We got our sweaters back on and took cover under the oak trees, continuing to munch on our sambusac, taking our time, and hoping that the storm will pass by the time we finish our food. And fortunately, it did. We emerged from our cover to find the entire mountain blanketed in a rather thick, foggy cloud. The unmistakable clear petrichor fragrance  emanated from the earth, which has been dry for a couple of weeks now. It felt like walking on a cloud, literally: We were almost at the peak by now, and we could barely see anything beyond the trail.

And then we spotted some more rare wild flowers! Tulips, and other bulb flowers which I am yet to identify.

We went all the way to the top, and then glided all the way back (and much faster by then, as we were skipping and hopping down the trail like restless mountain goats). We then drove all the way through the fog to the peak (from where we were supposed to take the circular trail) and on the way we spotted another type of orchid.