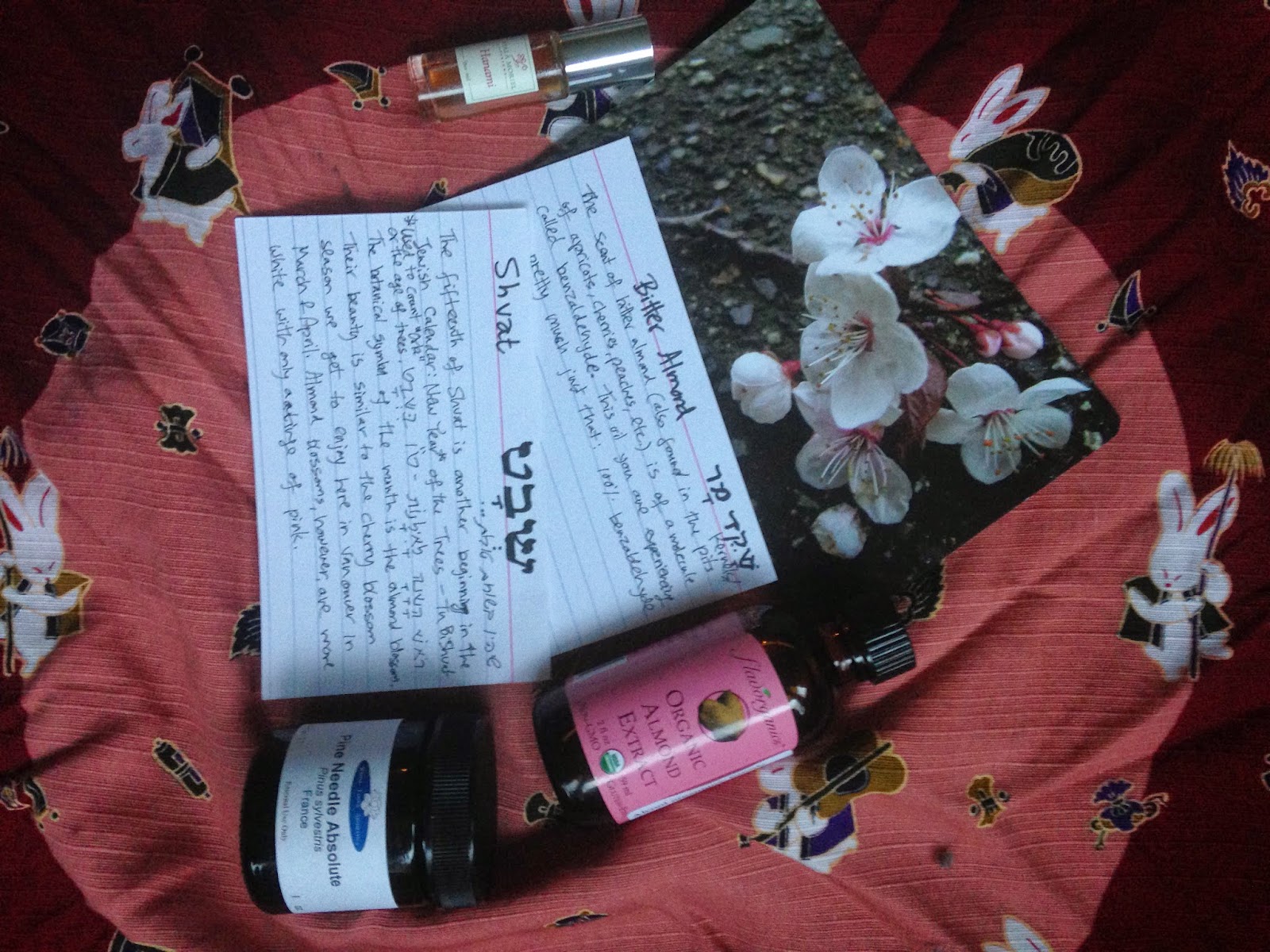 Today is Tu BiShvat - the new year of the trees. And what better essence to celebrate than that of almond? This year I have finally got my paws on bitter almond oil. It is a very simple essence, and can technically be considered an isolate, as it is nearly 100% benzaldehyde, the simplest aromatic aldehyde, comprised of a benzene ring and a formyl substituent.

Benzaldehyde smells almost cloyingly sweet - which is funny coming from what is generally called "bitter a almond". Benzaldehyde was first extracted in 1803 by the French pharmacist Martrés, and in 1832 synthesized by German chemists Friedrich Wöhler and Justus von Liebig.

It is extracted not just from the bitter, and largely inedible type of almonds (which have a dangerous proportion of prussic acid, AKA cyanide) - but also from the kernels found in apricots, cherries, peaches, plums, apricot which have a more delicate but still bitter taste and that unique aroma of benzaldehyde. Apple, quince and pear seeds also have small amounts of benzaldehyde, and it is also naturally occurring in oyster mushrooms, cinnamon root and bark, champaca, patchouli, cassia, orange blossom concrete and cassie concrete.

Bitter almond oil is mostly produced in the USA, Israel, Syria, Turkey, Morocco, Spain and France. To extract bitter almond oil, the press cakes from the bitter almonds (Prunus amygdalus var. amara), or kernels of apricots, plums, peaches or cherries (an easy raw material to come by, as a by-product of the fruit canning process, and after their fixed oil has been removed - mostly for the cosmetics industry) are soaked for 24 hours. This soaking allows for an enzymatic process to occur, that will break down the amygdalin in the kernels and initiate the formation of benzaldehyde and hydrocyanic acid (cyanide). Of course, the latter must be removed (by alkali washing and rectification), due to its lethal toxicity. As to be expected, non of the almond oil used for perfume or flavour contain any cyanide. Curiously, although cynadine and benzaldehyde share no commonality in their molecular structure, they both have a similar aroma. You may have come across the smell of almonds in numerous detective and crime novels.

Bitter almond smells like marzipan (or almond paste), is highly volatile and unstable, and is more popular in favouring than in perfume - though preferably, it should be fixed by adding alcohol, vanillin or anise alcohol, among others. Besides its extensive use in baked goods (i.e.: in almond filling for frangipane tarts and almond croissants, for example). Curiously, the taste of this oil is sweet, not bitter (the bitterness is from a non-volatile ingredients, and it disappears when exposed to the water during the distillation process). Bitter almond oil is therefore used as a sweetener when composing flavours such as apple, apricot, cherry, pistachio, raspberry, almond, and more.

As far as perfumery uses, bitter almond adds a sweet, gourmand note whenever one wants to have a marzipan-like quality. It also is a great additive to violet, mimosa, cassie and orange blossom. It pairs beautifully with anise, cacao absolute, cassie absolute and vanilla.
It's important to note that nowadays, mostly, synthetic benzaldehyde is used. A telling sign that a "Bitter Almond Oil" is in fact synthetic benzaldehyde is the notion of FFC on the label of "Bitter Almond Oil", which stands for "Free From Chlorine" - chlorine only turns up in the process of synthetic manufacturing of this component, and must be removed for flavour and food preparations. If the label says "FFPA" (which stands for "Free From Prussic Acid") that means that it's from a natural origin (i.e. the kernels mentioned above). Early Almond Blossom, a photo by Ayala Moriel on Flickr.
It's full moon & the New Year of the Trees (a rather obscure Jewish holiday).

If you have an almond blossom perfume, now is the time to wear it - the almond trees are traditionally in full bloom at this time of the year in Israel (though the almond flower in the picture was taken sometime in mid December). There aren't too many almond perfumes in my repertoire, or in my collection. Farnesiana  with its violet-macarons and marzipan aroma comes to mind. Oh, and there is also the almost forgotten KenzoAmour LeParfum, as well as a couple of soaps I adore - l'Occitane's Almond Delicious exfoliating soap and Royal Herbs' Honey & Oatmeal soap. And last but not least - Gabriel's Aunt Biscotti candle.

Tomorrow would be a good day to spend time in nature, noting and contemplating the early awakening and preparations of the plants and animals for the end of winter. The winter might seem endless but it's already showing some signs of weakening...

And back to the topic of almonds - it's a note that's mostly associated with benzaldehyse - that molecule that smells like bitter almonds, although isn't quite bitter on its own. It's what you taste in almond extract, and most cherry flavouring. Pure, 100% natural bitter almond essence is hard to find because of some legalities . For food use, the prussic acid (aka cyanide) must be removed, and you have to show some certification before purchasing it even for fragrance use.

And there is also the caramelize almond like aspect of tonka beans, a characteristic of coumarin. You'd also find coumarin in high doses in hay absolute and liatrix (deer's tongue) absolutes. However, neither remind me of almonds as much as tonka beans: they smell more like luscious raisins. Also appropriate for Tu BiShvat, when dried fruit get more attention than any other time of the year.

Last but not least: heliotripin, which is hard to find as a natural isolate (but naturally occurs in Tahitian vanilla beans). Also known as piperonal, it smells like marzipan and cherry pie, and very much like the flower heliotrope - sheer heaven.