Layers of colours in two different techniques. I used only natural colorants and I love the result even though the alkanet root is not as purple as I hoped. I even added some indigo and titanium dioxide to brighten it a bit, with no success.
The other colours are red madder root, yellow-orange anatto seed, black activated charcoal and white titanium dioxide. One is a "pointy peaks" technique; and the left overs went into the rather wobbly stripes. By then the soap batter was too thick for anything fancy and some of the colours didn't have sufficient amounts for a while layer, while others had too much. so I just filled up with whatever was on hand. It's not as exciting as the pointy peaks but the colours are still pretty and vibrant and look very much in the spirit of Halloween

Will be ready October 29th - just in time for Halloween

The scent is named in the same manner as one of my perfumes, yet has a more realistic licorice-candy character. 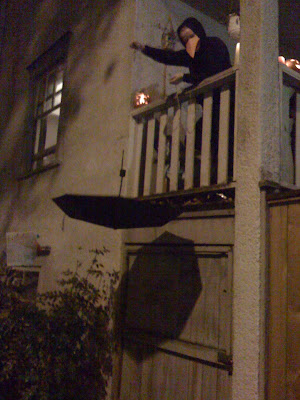 Join us for a spooky tea party on Halloween, October 31st. Enjoy some deadly treats handcrafted by Ayala, such as the infamously addictive Blood Truffles (with chilli and rose) chocolate truffles, lavender-crusted pumpkin pie, licorice cupcakes, tarragon tea sandwiches, our exquisite perfumed teas - and last but not least: Ayala Moriel's perfume line guests are invited to sniff and explore while meeting other passionate perfumistas in Vancouver!

At 2pm there will be a presentation about scents that can bring the dead to life, and the less-known connections between witchcraft and perfumery.

And as if this and and all the treats and good company is not enough reason to come - you will also be getting goodie bags and door prizes, and a lucky draw to win a bottle of Black Licorice perfume!

The spooky menu for this wild tea party will include:

Costumes are welcome - you can also continue on for trick or treating in the neighborhood afterwards :-)

P.s. The photo, which looks a bit Hieronymus Bosch like, is from last Halloween: the young woman who lives upstairs wanted to participate in Trick or Treating even though her suit has no access to the street. Being the creative person she is (which shows on her costume) - she used this umbrella to send the treats down to the kids on the street. It was so unique to see and so heartwarming that she went through all this effort sitting on the porch that cold night just to give West End kids a good Halloween experience!
Back to the top