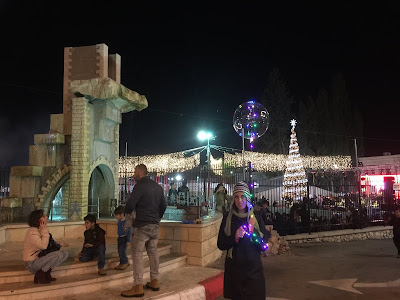 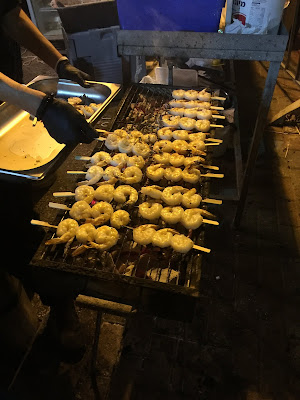 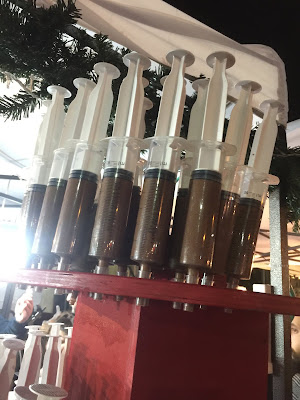 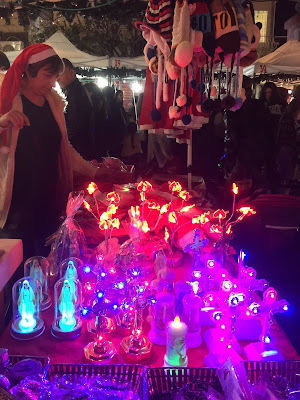 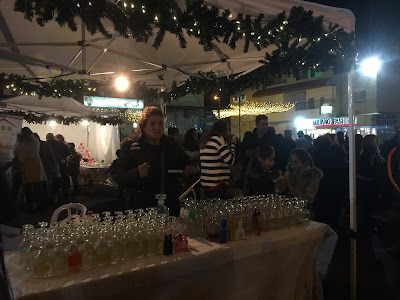 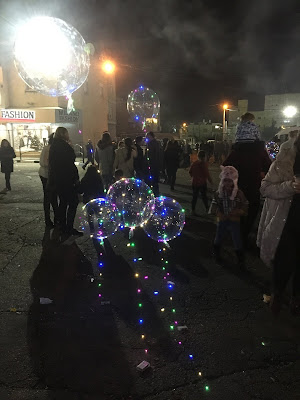 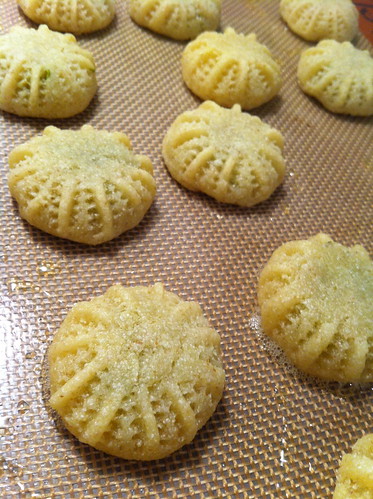 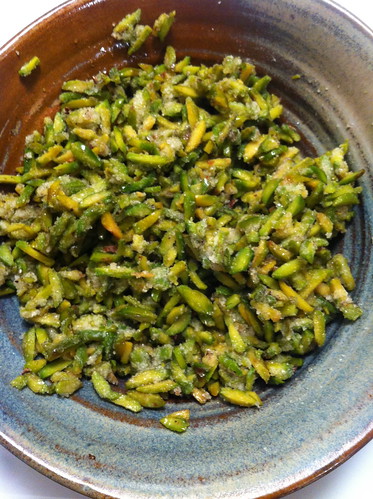 Basboosa is a Middle Eastern semolina cake, sweetened with a rosewater honey syrup and often including almonds in the batter or just for decoration. Inspired by the incredible basboosa I had in ancient Jerusalem a couple of springs ago, I have modified a recipe I found online, using goat's milk yoghurt instead of the usual cow's milk yoghurt/buttermilk that the recipes usually call for.

For the Syrup:
3/4 cup sugar
1/4 cup water
4 Tbs. lemon juice
1 Tbs. rosewater
and/or
1 Tbs. orange flower water
- Boil in a small saucepan until all the sugar has melted and the thin syrup can stick to a table spoon.
- Set aside to cool until the batter is baked

For the Batter:
225gr semolina (cream of wheat)
250gr ground blanched almonds
225gr icing sugar
1/2 tsp baking powder
350ml cup goat's milk (or goat's yoghurt)
6 Tbs. ghee or melted butter
Sliced almonds or whole blanched almonds for decoration
- Preheat oven to 350 F (180 C)
- Mix all the dry ingredients
- Add the milk or yoghurt and mix well
- Add the melted butter
- Pour into a pan (either a round spring pan, pie pan or a square/rectangular pyrex pan would do)
- Bake for 15 minutes
- Sprinkle the sliced almonds overtop, or place neatly in lines the whole blanched almonds
- Bake for another 30 minutes or until golden
- Take out of the oven, and immediately sprinkle over the syrup over the hot cake, until the cake is all soaked in syrup. Banana Sheera, originally uploaded by Ayala Moriel.
Before reviewing Sira des Indes, I figured I should try the dessert it was inspired by. So I searched for a few recipes online and found this one. I think now I can see the connection, as well as the choice of banana, cardamom and indolic notes combined in the perfume. Bananas cooked in milk and semolina and spiced with cardamom has a flavour that is like no other - rich, warm, full bodied, exotic. The saffron garnish though is what adds the extra floral/medicinal/indolic/animalic touch. Now I can smell the connection... Plus it was a fabulous way to start the day - with a rich and fruity semolina dessert! Mashing Bananas for Banana Sheera, originally uploaded by Ayala Moriel.
Method
1. Melt the ghee in a small sauce pan, heat for about 5minutes
2. Add the semolina and fry until golden brown and fragrant
3. Add sliced nuts
4. Add 1 cup of warm milk (keep the rest for the mashed bananas)
5. Stir to avoid chunks from forming in the semolina.
6. Once the pudding becomes thicker, add the sugar and
7. Mash the bananas and mix with the remaining warm milk
8. Pour banans and milk to the pudding.
9. Drain the raisins and add them to the pudding.
9. Let cook for about 6-8 minutes over medium heat.
9. Serve hot in small dessert bowls, and garnish with saffron, crushed cardamom and sliced nuts.