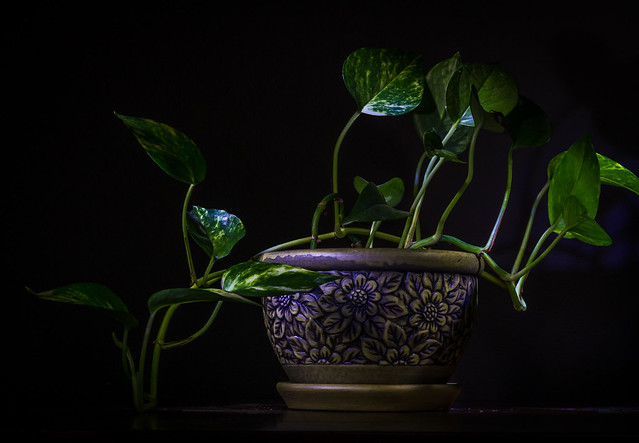 One of the strangest and fondest childhood memories is when me and my mom moved from Jerusalem to our village in her tiny car, whose trunk was filled to the brim with our houseplants. My mom did not trust the movers to handle them gently enough. So I got to enjoy their green grace through this long ride (only two hours, really, but tremendous length in Israeli terms). Their leaves filtered the sun and made the atmosphere cool and comforting. It was like traveling inside a little jungle, that sang a silent lullaby in my ears.

When we arrived at the village, the plants had a special spot in the shade until our cabin was built (we lived in a hut with dirt floor for a while). And I liked to spray their leaves with water and help my mom care for them.

Decades later, I'm returning to the same village only from much further distance. And I don't trust the movers to take care of my plants so I will hope my friends will adopt them. I don't trust the movers to pack my perfumes and raw materials either, so I'm doing it myself, with the help of some mad friends who I have no idea why they would take on such a task; but nevertheless I'm thankful because without them there is no chance in hell that I will be ready to leave in time.

Also in my suitcase are going some seeds I want to saw of fragrant plants, in what I dream to be a miniature perfumer's botanical garden and an part of an educational project for micro-distillation and old-fashioned extortion methods of fragrant plants. I'll start with some violate (Viola odorata) and green shiso (Perilla), and bulbs of lily of the valley, snowdrops and tuberose that I'll have to remember to unearth from my potted plants... The rest I will have to scout and research once I get there. 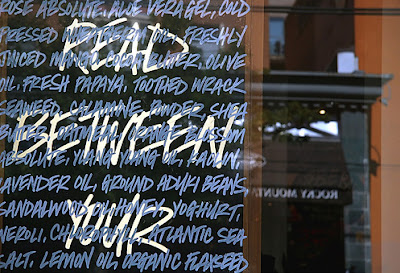 I was blessed with a fragrant guest from out of town today: Sofia Madeen from Colorado. It’s very unusual that anybody that I know comes to the city who loves perfumes, and so we went on a little perfume expedition in downtown Vancouver, and explored some of the best perfume destinations.

Our first stop was at the Bay, which is the exclusive retailer of Annick Goutal in town. We sniffed our way through the entire collection, and exchanged our impressions. I always find the vocabulary each person uses in reaction to the same fragrance is sometimes completely different. While I find the Goutals very fragile, yet sharp and green (for the most part), Sofia mostly ldescribed them as soft and feminine (which they are). We lingered loner on describing and discerning notes for Grand Amour, Quel Amour!, Folavril, Passion, Eau de Charlotte and Eau de Camille.

We than set to go across the street to Holt Renfrew, which carries many boutique lines, which I don’t think Sofia can find in Colorado.

The Armani Privee collection waited for us at the entrance, with the solemn black wooden cases and the smooth gemstones at the top. The ones that cought our attention the most were Cuir Amethyst, Pierre de Lune and Bois Encens. After showing off a perfume-proficiency beyond what the SA is familiar with, she was convinced to give us samples of our favourites. I think Sofia got Pierre de Lune and Bois Encens, and I got Bois Encens and Cuir Amethyst. The latter, unfortunately, unfurled on my skin completely differently than on the scent stripe: while my initial impression of it was of burnished leather with powdery cassie notes, on my skin it turnes into too much powdery, with none of either (cassie nor leather) managing to maintain their presence. Bois Encens is exactly what the names suggest though – inencese – primarily frankincense – which is very true to the burning resin as many of us know mostly from Catholic churches.

We than discovered the location of the Dior Homme exclusive boutique colognes. The sales lady was really nice and not pushy, and she said she would let us make our own samples next time we come in. Here are my initial impressions as I remember them from the scent stripes:
Bois d’Argent – soapy and musky, clean, similar to the dry down of Thiery Mugler’s Cologne. I really liked this one and will have to try it on my skin for a day or two.
Eau Blanche – the most citrusy of the three and I quickly dismissed it even though I am ready to be surprised upon a proper skin application.
Eau Noire – unusual, original, earthy and spicy, aromatic. With notes of turmeric and dry licorice root which reminded me of the old Muslim market in Jerusalem, and also notes of lavender absolute. The colour of this cologne – a rich green tint – gives the lavender absolute away (the raw material is turquoise liquid, and changes the colour of the fragrances it’s used in similarly).

We than set to check ouit the Jo Malone’s boutique, to try the new Blue Agava and Cacao. To me, it smelled like a repulsive bathroom cleaner at first, than dries down to a nice Coty’s Musk Vanilla combo. Sofia did not think it smelled repulsive at all. We than sniffed our way through some of the highlight of this very English collection – including the handsome Lavender & Amber, and the Grapefruit Colognes, but also the more unusual ones such as Pomegranate Noir, Vintage Gardenia and Black Vetyver Café.

We than wanted to try Soir de Lune, but a sales lady wanted to get us into MyQueen and Stella, but we had to leave as my nose at this point was just too tired. We tried Soir de Lune on a scent stripe, and Sofia mentioned something about a honey note in it that makes me want to go back and try it more seriously. After all, it is a newly released Chypre that actually smells like Chypre! We had a little tea break – we both drank Matcha Latte at Blenz, sweetened with honey, which is my favourite drink, yum! I was very pleased to see that Sofia liked it too.

We went back to Holt Renfrew to try Tom Ford’s Black Orchid. Of course they didn’t have samples (and they don’t have any to this very day, I check every time I visit there!), but I did want to try it on my skin this time. At first, Black Orchid seems to stand up to all the expectations the packaging and the anticipation has created: luxurious, Femme-Fatale infused mushrooms sautéed in spices. If you think these are the base notes you’ve been deceived: these wear off quickly, gradually revealing a phase of rum-soaked berries and than a rose opens its velvety petals for a short while as well. From this point on, it’s all goes downhill: the patchouli showing some unlikely affiliation to a marine note, and the whole thing turns into a better version of Allure Sensuelle – not as obnoxious, and definitely more wearable. Black Orchid is disappointing: I can accept the idea of some scent having less than lovely top notes, even marine top notes, as long as they evolve into something more than just that. Tom Ford has shown us that this is possible in reverse, and created the most disappointing fragrance in 2006.

We continued to the Hermes counter (where I showed Sofia the wobbly display table that Tamya was unfortunate to knock off and break the Terre d’Hermes when it just came out LOL! The saleslady was not even in the least upset, and that gives a thousand points immediately to a retail store in my book!). We sniffed some Hermes scents – Hermes Rouge, Hiris, Bel Ami. Talked about Olivia Giacobetti. Which our mutual friend Hilda has introduced me to when we met in Toronto, and talked about her signature “paper” notes (something that Hilda pointed out to me, and she was very right; It wasn’t till later that I learned that many of my favourite scents are Giacobetti’s creations – Philosykos, Ofresia, Premiere Figuier, and of course – Dzing!).

Once we sniffed everything we could at Holt Renfrew, we set off to visit Nasrin at The Perfume Shoppe. Nasrin is the most knowledgeable perfume retailer in town, probably in entire British Columbia. Her love for her perfumes is evident, and her shop is a wonderful gem in a city that otherwise smells like rainy rain drizzled with more rain on the top.

I tried Alamut (on my other wrist) for the very first time – a very soft, well-rounded floral chypre, outstandingly gorgeous with a rich floral heart (orange blossom is one of the main notes, but none really stand out). The drydown, however, is too ambery for me.

We tried Yosh’s Omniscent (on Sofia’s wrist), and another scent that to me smelled sickly of synthetic tea rose.

Sofia bought a bottle of Dzing! – as a souvenir of our day. I would have done the same if only it wasn’t the last bottle!

We than had to go back home and passed by the Hermes boutique without stepping in, as we ran out of time and it was time to get something to eat. We had a late sushi lunch on the way at my family’s favourite Japanese restaurant called Tsunami Sushi (they have a bar with little boats floating with sushi and you can just pick what you want, a thrill for kids, but if it makes you dizzy you can always sit at a table). We had edamame, gomai and yam-and-avocado sushi rolls, as we sniffed along a gift box of my sample vials.

Image: Read Between Your by RobinThom
(It was taken on Robson Street in Downtown Vancouver, and I believe it's a window for the Lush store. Can you recognize any interesting words in the text?)

P.s. I apologize for not having uploaded any original photos for a while. The downside of having my fabulous new Mac is that I can't insert the little Sony memory cards right into the computer (like I could with my previous Sony laptop) and I can't find the cable that connects the camer to the computer!