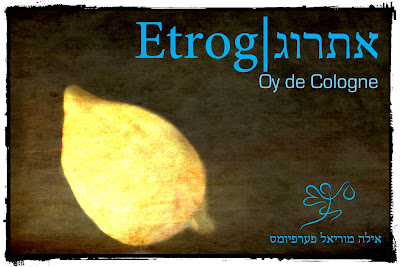 Due to its delicate flavour and sweet perfume, citron (Citrus medica, or Etrog in Hebrew) garnered mythical significance like no other citrus fruit. It is one of the 4 species in Sukkot, alongside myrtle, willow and palm. Etrog symbolizes the heart, and is said to represent a complete, balanced person: one who has both knowledge and learning, as well as good deeds.

And like all good things, citron fruit is rare, and its essences is even more difficult to find. Therefore, the perfumer had to tincture her own: fresh organic fruit was tinctured by her family in Israel, and the rabbi of downtown Vancouver donated his family's Etrogim for 3 consecutive years. Thanks to this community effort - the first "Oy de Cologne"!

"... for so were fulfilled the days of their anointing: six months with oil of myrrh and six months with sweet fragrances..." (Megillat Esther, aka Book of Esther, Chapter II, 12)

The story of Purim is dotted with puzzling anecdotes about the royal life that on the surface do not seem to make much sense. One of them being the 12 months beauty treatment that Esther, the heroine of the story, has to go through before being seen before the king. Before being shown before the King Ahasuerus in a “beauty contest” for the crown of the Queen of Persia, the virgin contestants had to undergo an elaborate beauty treatment: Six months of immersion in myrrh was not enough (and some say only served the purpose of purification); it was followed by another six months of perfuming the body with perfumes. And we can only but guess what these might have been. I’d like to think they had rose and saffron in them, two fragrances that are so strongly associated with Persian culture. So the girls had to spend an entire year getting ready for this “date” with the king (or shall we say a one-night-stand?), until he finds the right woman to bear the Persian crown.

As the story goes, the winner of the contest was Hadassah (Hadass is Hebrew of myrtle), a Jewish woman who as per her cousin and guardian Mordecai’s instruction had to hide her identity and heritage. She changed her name to Esther - meaning star in Persian and supposedly referring to the star-shaped myrtle flowers. And because of her virtues of modesty, selfless kindness and devotion to her people - the Jewish people of Persia have survived a possible genocide, and the custom of dressing in disguise in Purim was born.

I think it is particularly interesting that Hadass (myrtle) symbolizes a person who does good deeds but is ignorant. Hadassah (or Queen Esther) used her will and wit to save her people. But she neither chose to be in that position (she was taken to the palace on the king’s order and against her will); and did not know that her people are in danger only until she was asked to come to the rescue. According to Western mystical traditions, associated with the planet of Venus and Aphrodite - the goddess of beauty and love. Myrtle is an evergreen bush and is used to decorate gardens in the near east both for this quality as well as its refreshing and potent aroma.

In contrary to the myrtle’s freshness, when Hadassah is transformed into her new role as Queen Esther, she undergoes a myrrh-cleansing ritual that has parallels to that of embalming the dead*. The reference to death can be seen as a passage and transformation, or as an ending to that beautiful fresh star-laden plant. In contrary to the fragrant evergreen myrtle leaves, myrrh is a desert tree that when gets hurt produces resin "tears" with a bitter, penetrating aroma ("marr" means "bitter" in Hebrew and is the root for "morr", the Hebrew name of myrrh). In ancient Egypt, myrrh represented the lunar goddess Isis and later on the Western mysteries associated myrrh with receptive, feminine powers, attributed to the planet of Saturn and the element of earth; and in the New Testament, myrrh was one of the three gifts of the Magi to baby Jesus and symbolizes the sacrifice of death that he was to go through later in his life; and was also used to ease Christ's pain on the cross (myrrh is an analgesic), so we see myrrh is repeatedly associated with death and suffering. On the other hand - in ancient Egypt, myrrh was burned in the temple of Rah (the Sun God) at high noon to mark the position of the sun - so the symbolism of myrrh in Queen Esther’s story could mean reaching of the peak of her power, when the sun is shining in all its might.

Perhaps I found the Purim perfume - with myrtle and myrrh. Something to think about for next year when I run out of ideas for a costume, as usual.

* The other two parts of the article Feminist Aspects of Megillat Esther are quite an interesting read if you are familiar with the story. Here are the links to part 1, part 2 and part 3.
Back to the top