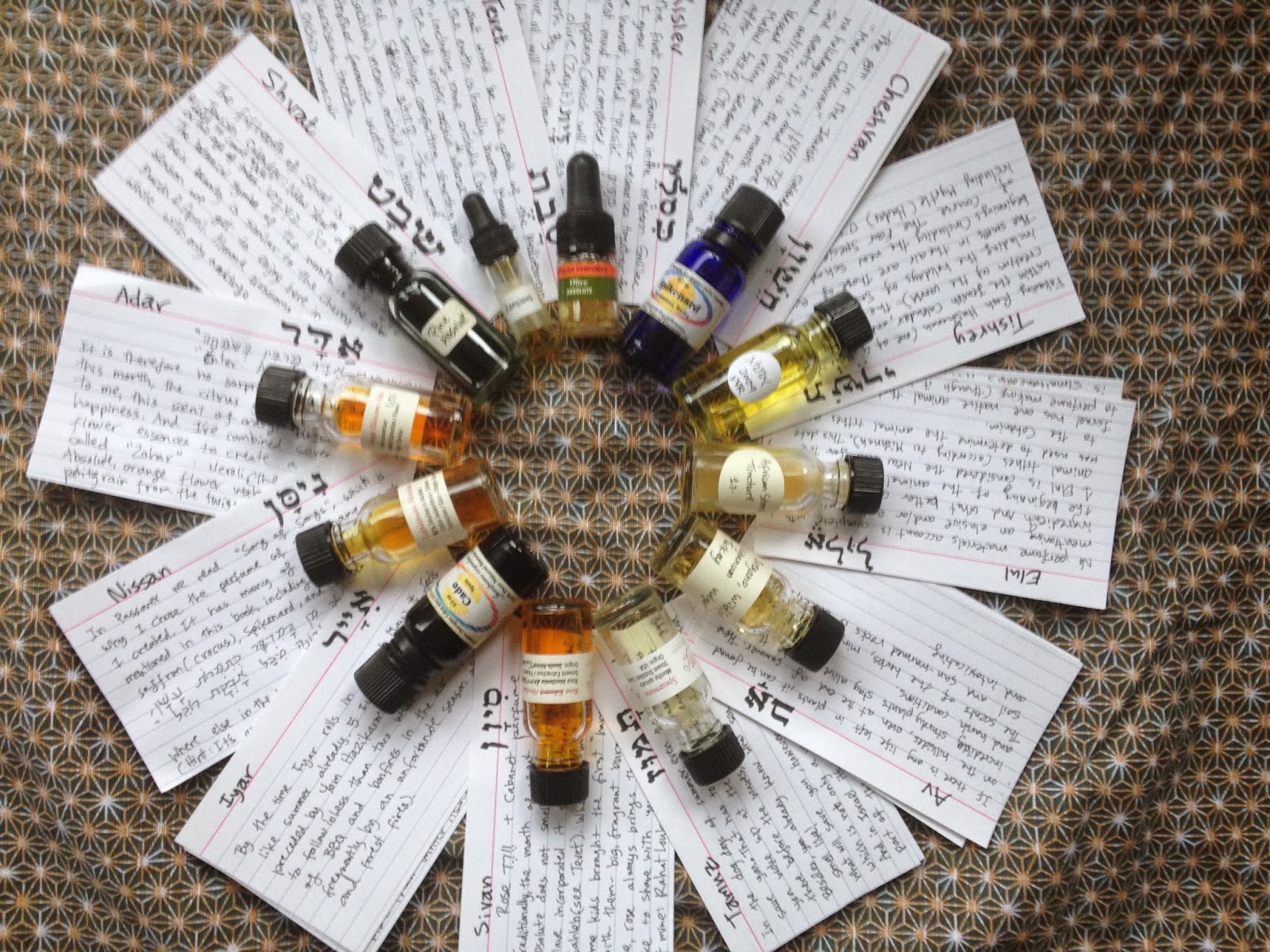 Yesterday I had the pleasure and the honour to partake in Limmud Vancouver - an annual event of Jewish learning and cross-fertilization (as all presenters also participate as student). The first Limmud was at Carmel College outside London, in 1980. Limmud events sprang all over Britain, Europe, and the Americas. This year was the second event of its kind in Vancouver, and offered an exciting schedule, with 9 sessions each hour, including 8 lessons and a mini film festival from Peace It Together.

My class was titled Breathe In Israel, and was a virtual olfactory trip to Israel around the Jewish calendar year. Here's the gist of it (though we smelled many other things, of course, including a perfume from my collection that had some connection to an ingredient or a time of year).

Tishrey:
Citron or Etrog essences, and my Etrog Oy de Cologne, as this Sukkoth is celebrated then. Other smells: Hadas (green myrtle).

Cheshvan:
The smell of the first rain, called Yoreh in Hebrew, and about petrichor in general. We've smelled Spikenard, which reminds me the most of the smell of wet earth, and also Rainforest and Tamya, named after my daughter whose birth night was also the night of the first rain that year!

Kislev:
Olive absolute, to commemorate the Ness (miracle) of the olive can. It's also a great time of the year to enjoy hot ginger tea (Zangvil in Hebrew) with hulnejan.

Tevet:
Precious bulb flowers adorn the land at the dead of winter, including wild narcissus and orchids. So I brought both narcissus absolute and Narkiss perfume to smell. This is also the time of the year when one can find Sahleb (or Salep) - originally made from ground up starchy root of the early red orchid (Orchis mascula), in every street corner. Think about a thick, almost pudding-like milk beverage, perfumed with rosewater, and topped with spices (cinnamon, cardamom) and nuts (coconut, pistachio, almond or peanut).

Shvat:
To celebrate the New Year of the Trees (AKA Jewish Arbor Day), which occurs on the 15th of Shvat (just in 2 days - although technically, it starts tomorrow evening!), I brought in the scent of bitter almond. This is because almond blossoms are the botanical symbol of the holiday - their pure flowers adorn the trees exactly at this time of the year. I also brought in Hanami, as it's the closest thing I have to almond blossom.
I also brought in pine needle absolute, because on Tu BiShvat, we plant a lot of trees, and among the non fruiting trees, pines are the most widely planted all over the country, to make for fast-growing (although sadly also fast-burning) forests on the once barren hills.

Adar:
"Enter Adar - begins happiness".
And at this time of the year, the orchard begin to bloom. Their scent evokes happiness more than any other perfume in the world. We also smelled Zohar, my orange blossom soliflore.

Iyar:
Remember the pine trees we planted in Tu Bishvat? Many will burn down during the return of the hot season (summer in Israel lasts almost as long as the rainy season on the West Coast). We smelled both Scotch pine essential oil, pinewood (Bois des Landes) and pine needle absolute (again) and compared the three. Also, for celebrating Lag BaOmer that happens that month, cade oil, which is a destructive distillation of juniper, and really smells like liquid smoke and campfire.

Sivan:
Wheat absolute for the wheat harvest season and holiday of Shavuot. And roses, big, luscious red roses, like the ones my friends would bring in a basket alongside green almonds and almost-ripe apricots, to the altar of Bikkurim they'll set up in kindergarten to reenact the holiday in the days when the temple was still built in Jerusalem. And of course we had to taste some rosewater-scented Rahat Loukum (Turkish Delight), and indulge in Cabaret perfume!

Tamuz:
In the dog days of summer, not even the beach can save you. It's too hot there, and besides, it's usually infested with poisonous jellyfish. If you're lucky, perhaps you can enjoy some beach time just around sunrise and around sunset. The rest of the day, lay low. And exert as little energy as possible, as to not overheat. If you need an extra boost of energy (and you will need it for sure by the time the dreaded 4pm rolls in) - you'll have to indulge in some iced mint lemonade, nana tea (spearmint tea, the Moroccan custom has caught on to the rest of the country quickly, because it's so good - even though there was no gunpowder tea to be found in the land of Israel back in the 1950s, when the Moroccan Jews made Aliyah). And last but not least: Coffee, the stronger the better, either Turkish style cooked in a Finjan with cardamom and tons of sugar; or iced espresso made on a stovetop mokka machine.
For this month, we smelled seaweed absolute, coffee CO2, cardamom CO2 and spearmint oil. Oh, and some Charisma perfume and Charisma tea as well. Students took some fresh sprigs of

Av:
Av being the peak of the grape harvest season (also celebrated in Tu Be'Av - the only holiday in an otherwise rather sad month for Jews - the month in which both the first and second temple were destroyed) - it would be appropriate to mention a wine-related term: Garrigue. That is also the scent that permeates the air if you walk on the hillside even at the dead of summer, when everything is seemingly dry and dead, the sturdy wild herbs are still alive and fragrant, underneath all the dust: sage, hyssop, wild oregano and mountain thyme. So we smelled these, as well as labdanum, and Ayalitta, which among my perfumes is one of the most evocative of the Meidterranean garage.

Elul:
No perfume lecture is complete without mentioning some weirdly repulsive animal ingredient. There are four "New Years" in the Jewish calendar, and 1 Elul is the new year for animal tithes. So what month could be more appropriate for mentioning Israel's very own animal raw material - hyraceum (AKA Africa Stone) from the Rock Hyrax? 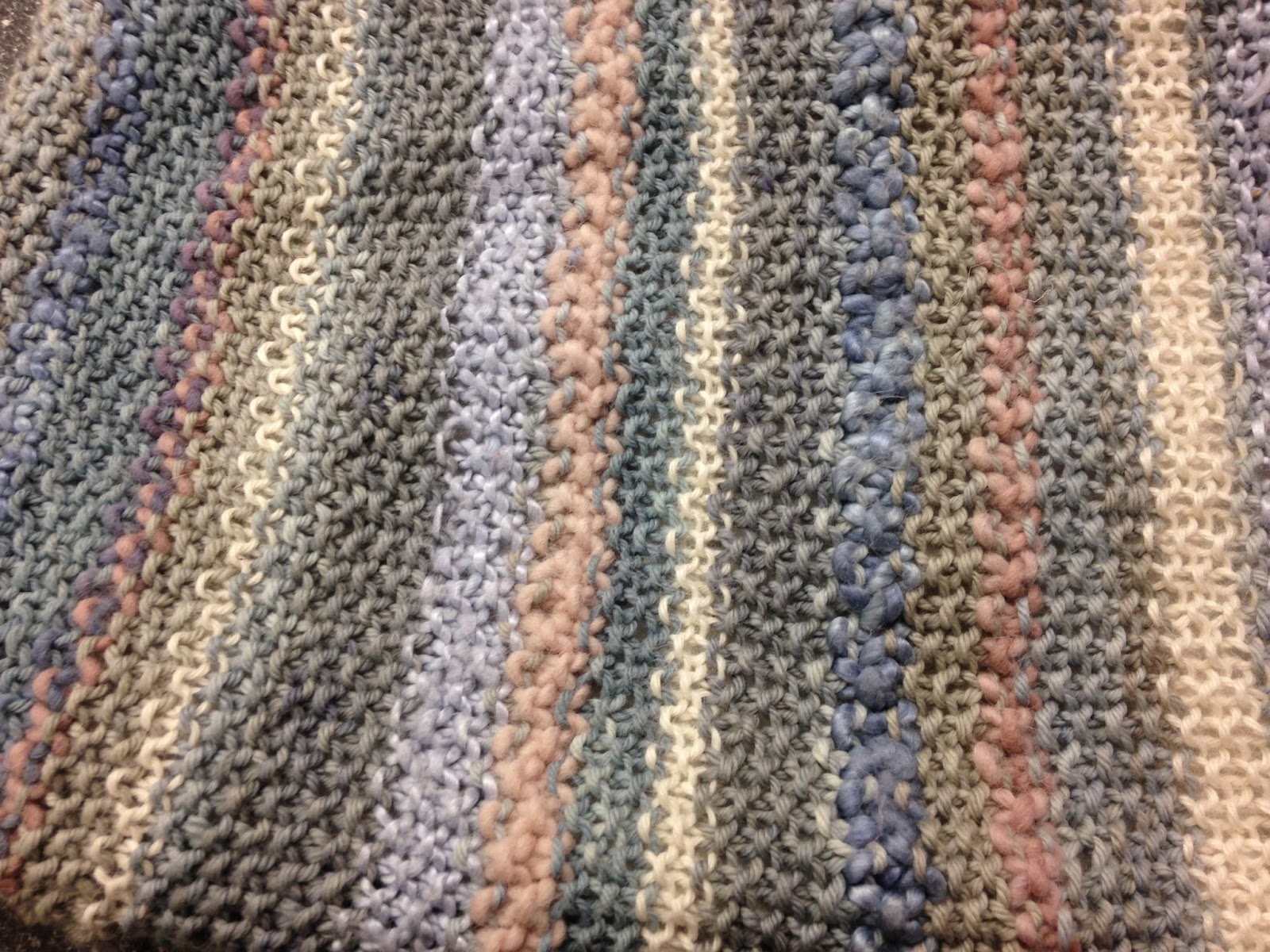 The class after me was about vegetable dyes and the the Tchelet (light blue) dye of the Tzitzit that is described in the Torah, taught by out-of-town guest Nili Simhai. It was fascinating and inspiring to see what can be done, for example, with just elderberries (the picture above is of the presenter's hand-dyed and knit Talith & Kippah case).

It was so much fun. Can't wait for the next Limmud!
Back to the top