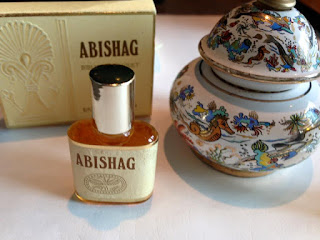 For those of you curious to know what I was talking about at the Candy Palmater Show (last week), here's a snapshot of Abishag (the first perfume I bought for myself from the Israeli Museum) and that little porcelain pot of Greek mythology sealife that my grandmother brought me around the same time (it was filled with a knock-off of AnaisAnais, but actually smelled better)*. This little pot still holds the very same scent; which is why I recommend you never throw out empty perfume bottle. They hold memories and will continue to do so quite loyally for many years to come...

Which were the first perfume/s you've purchased for yourself or worn? How old were you then?

* I was actually rather disappointed that the real deal was as soapy and sharply green as it is. But I now appreciate it more (even though it really isn't "me", and never will be).
Back to the top