Gilded Lily walks the strange path the flickers between spring and fall, modern and old-fashioned. It has the elements of a modern, screechy floral on the one end, amplified with tart ambiguous fruity notes (rhubarb and pineapple) and an earthy, warm and slightly balsamic Chypre. It reminds me of the bright floral chypres Jour Ensoleillé (Sonoma Scent Studio) and Tiare (Ormonde Jayne). But of course, coming from a different perfumer, it has a personality all of its own.

What makes Gilded Lily refreshing is its non-cloying playfulness. The particular choice of notes - sharp, crisp and bright fruity top notes sets it apart from the modern fruity chypre genre. So it makes a refreshing contrast in comparison to the sickeningly sweet berry and cough syrup notes found in the ever so popular "fruitchouli" genre that was designed to replace real chypres. And unlike so many other so-called chypre, it actually has oakmoss and labdanum in detectable proportions. These notes make an appearance about half an hour into the show. There is the bitter-green saltiness of oakmoss and genuine vetiver, and last but not least and quite surprising in comparison to the brisk opening: patchouli and labdanum with a balsamic, earthy sweetness, and a Miss-Dior-like familiarity that is rare in new perfumes.

If it wasn't for the suggestive bright red glass bottle, I would have never thought of rhubarb in association with this. Peppery elemi and acidic grapefruit remind me of the playful Si Lolita that captured my heart last winter. But this never gets quite nearly as gourmand and powdery. They cuts through the sweetness of the lily and add an interesting sharp edge.

The Japanese goldband lily accord at the heart of the perfume is quite subtle, especially considering that it is the inspiration for this perfume. It's fascinating to see this collection become more versatile, with warmer, richer and more natural bases in the last two perfume (see Field Notes from Paris) in contrast to the very light, musk-base of the first four. Between the elemi, the tart illusion of freshly-sliced rhubarb note and the tried-and-true chypre base, Gilded Lily might turn out to be quite addictive... In the far dry out, the labdanum dissipates completely, leaving only the driest and woodiest nuances (oakmoss, patchouli, vetiver and a hint of clean dry musk) to prevail.

- Posted using BlogPress from my iPhone 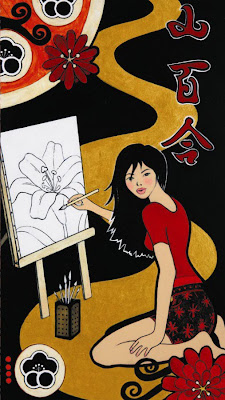 My friend and collegue Ineke in San Francisco has just informed me of her new perfume to be launched September 2010, titled Gilded Lily. Intrigued by the Goldband Lily of Japan (Lilium aurantium), which is now the basis for many of the modern lily hybrids.

Gilded Lily is a fruity Chypre, with top notes of pineapple and rhubabr, heart notes of goldband lily, and a base of oakmoss, patchouli and amber. I will tell you more about it after I smell it.
Back to the top