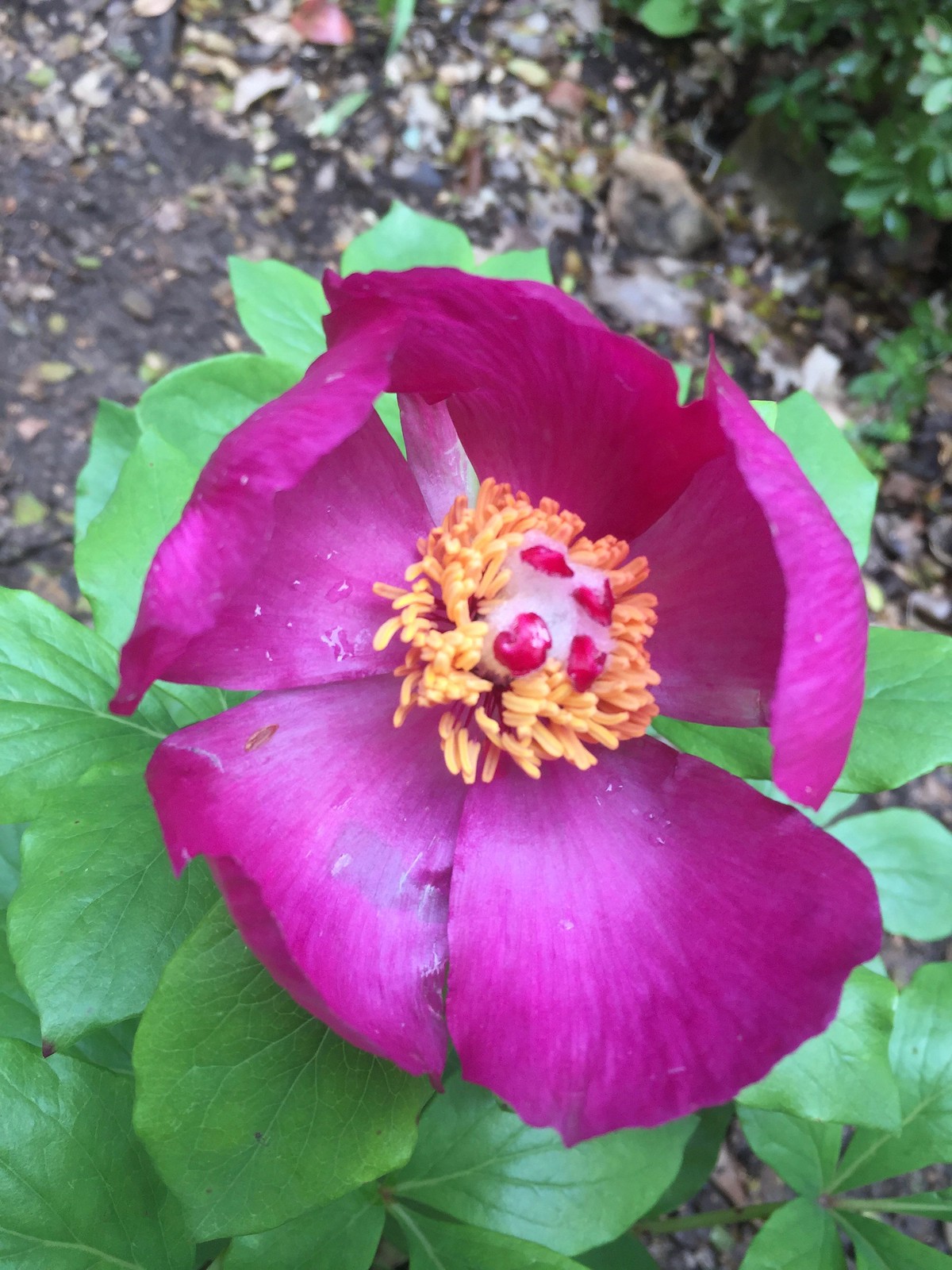 We went hunting for coral peonies (Paeonia mascula) in their natural habitat. I discovered so much more than I expected on the way, including about 7 kinds of orchids - so not everything will fit in this post. These impressive flowers are native to a large area surrounding the Mediterranean: Spain, France, Italy, Bulgaria, Greece, Croatia, Serbia, Turkey, Iraq, Lebanon and Israel. Here in Israel they only grow in one area in Israel, in the Mount Meron reserve. And even there it is not widely spread, but is found only in one specific area of the forest on Mount Hillel (near the Druze village Beit Jann).  In Arabic they are called "Bear Foot" because of the shape of their fruit. The origin for this name is a legend about lovers whose parents opposed their marriage. They ran away to the mountain, and were caught in a snow storm. The search party from the village lost hope for them when they saw brea footprints in the snow. Yet they followed the bear's trail and found the couple in a cave, and learned that the bear saved their lives by bringing them food. In the spring, peonies appeared on the bear's trail. 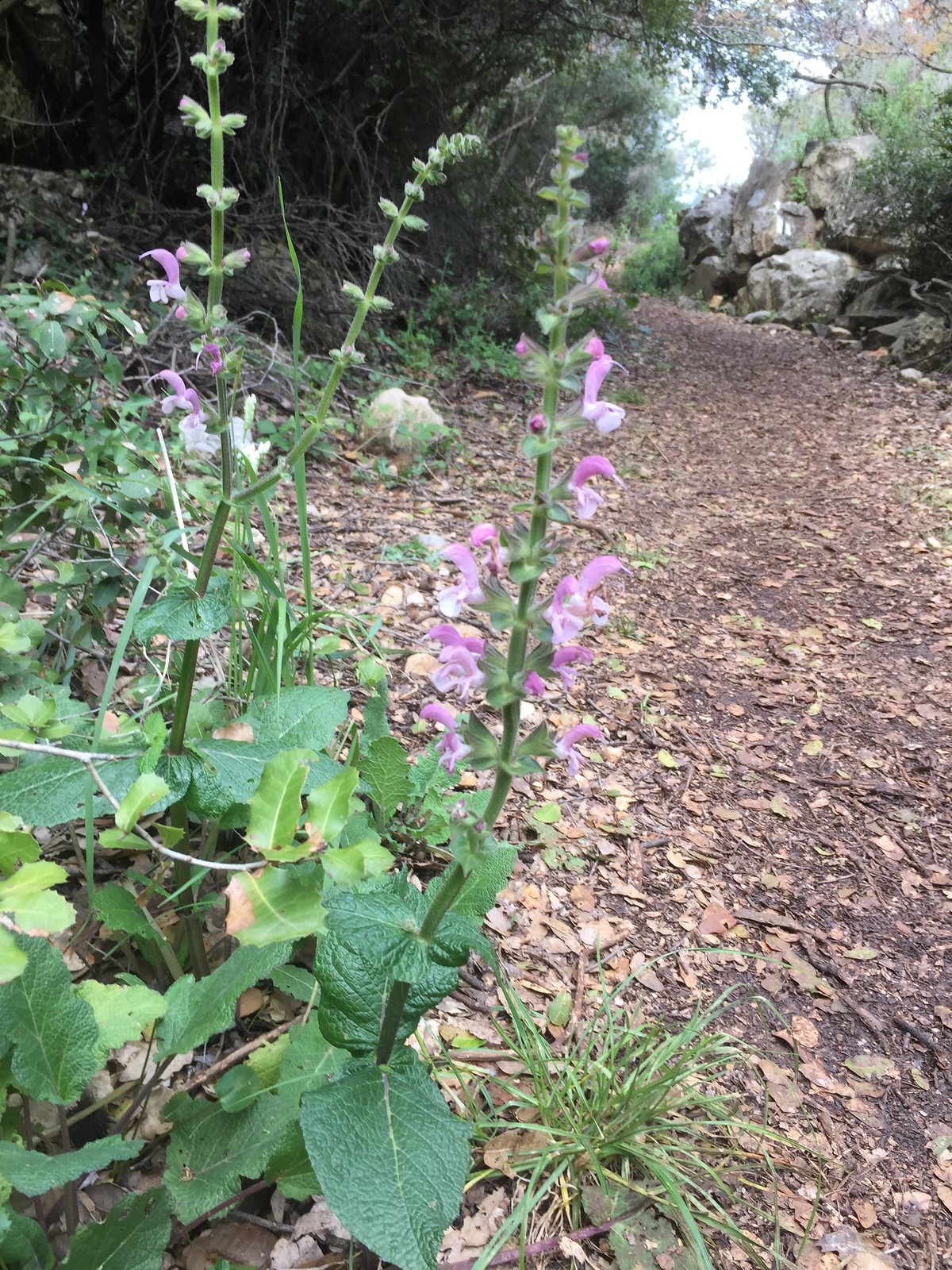 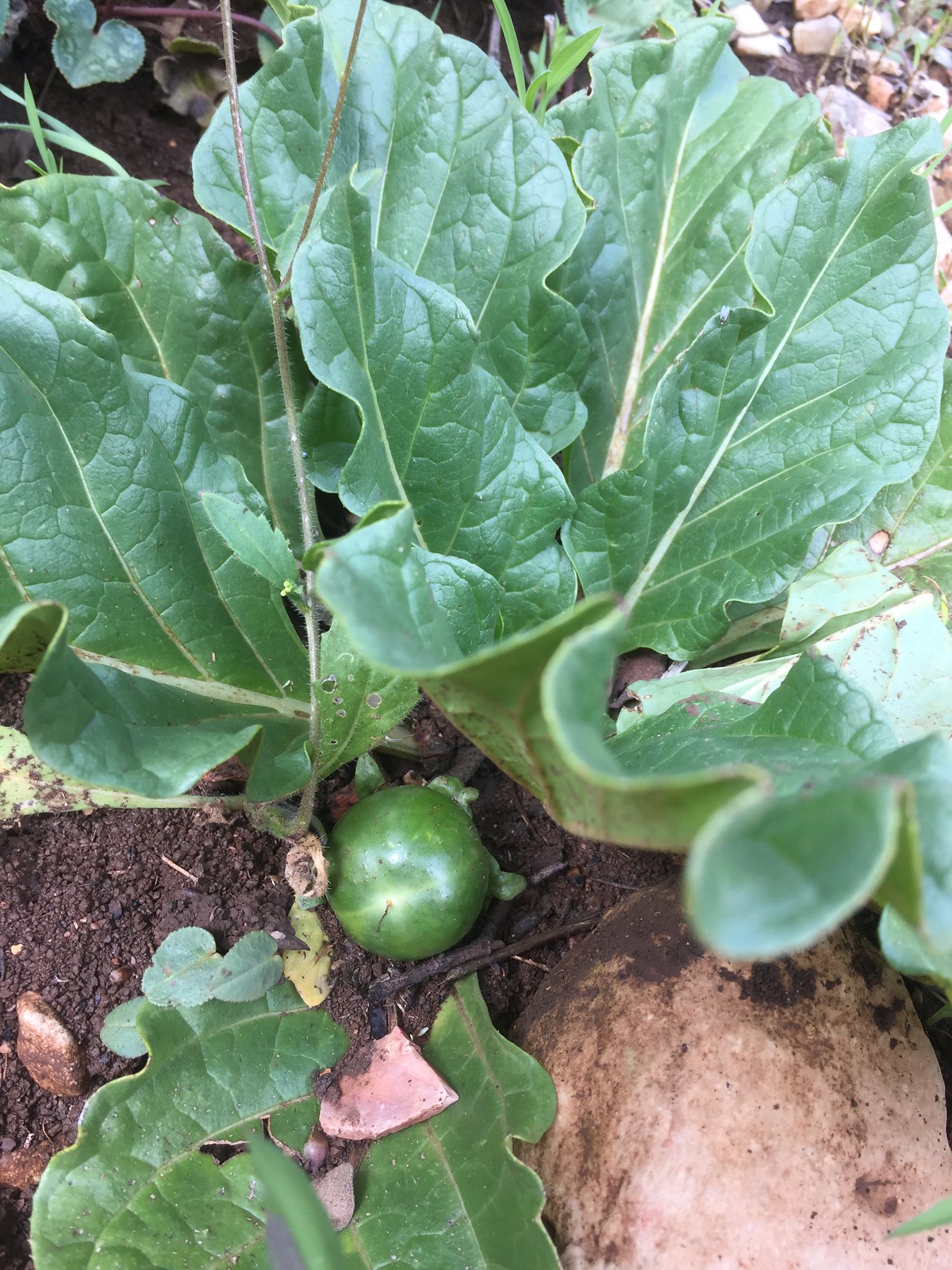 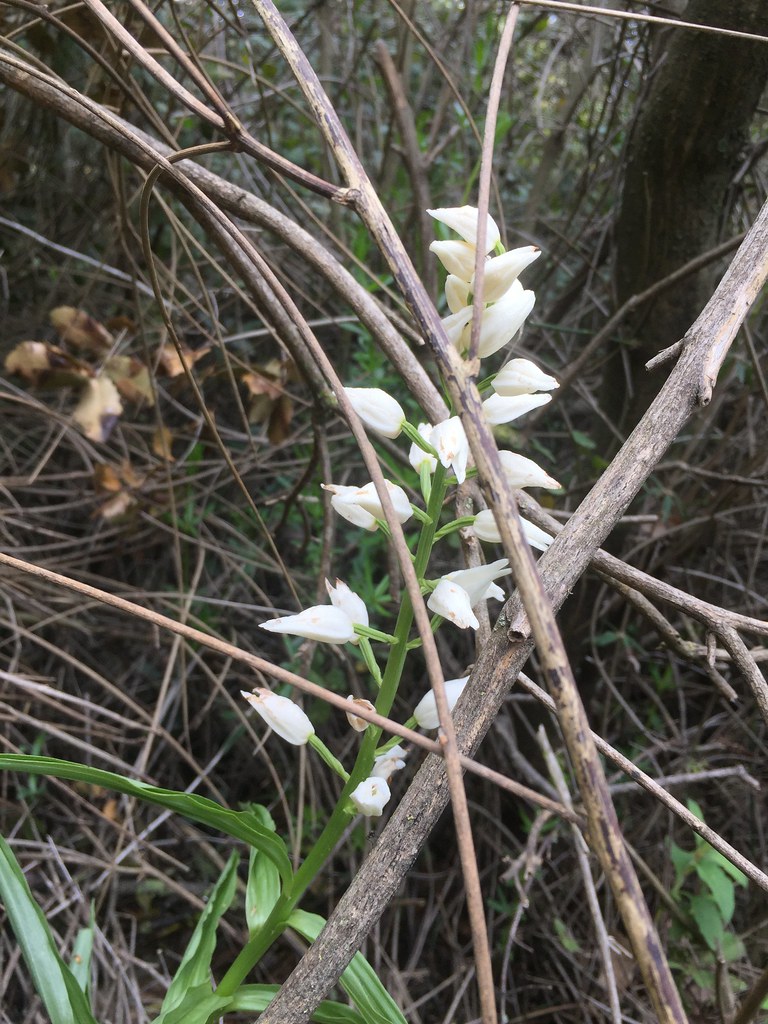 To get to the actual trail where the peonies live, one needs to walk on a pretty uneventful gravel road in an agricultural land that is abundant with olive grove, cherries and other stone fruit. There are of course some interesting plants along the way - but nothing that you won't see elsewhere: Jerusalem sage (which was in bloom when we visited), and white orchids here and there. I even stumbled across mandrake fruit (still green and not fragrant yet). 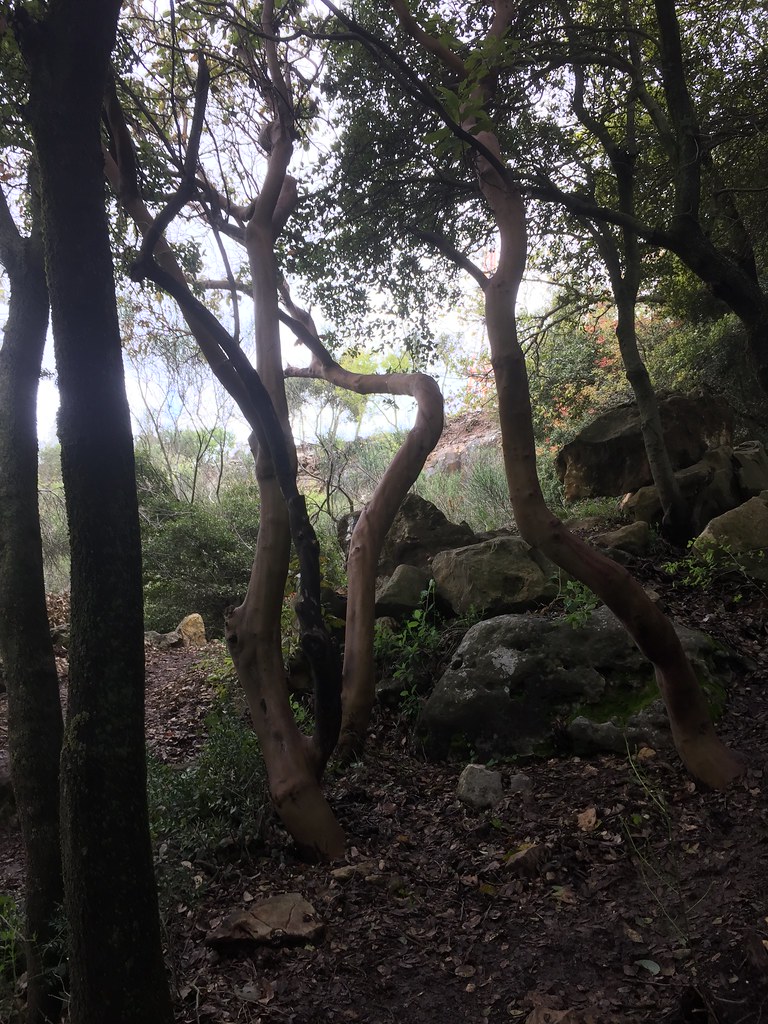 Then there was a nice little trail going uphill, distributed again by a gravel road, and shortly after plunging into a rather steep and slipper downhill trail, which is where we were about to meet the peonies for the first time.

It was an unusually cold, windy and rainy day. So not so many people were there to spot the flowers. This is unusual for the week-long holiday of Passover, in which the country's parks are overflowing with noisy Israelis littering nature to their heart's content. The few people who were there were very nice and helpful, and we just happened to start the trail with two couples, who were relatives of someone from my village. Not only were they not loud and evidently curious about plants (so I couldn't help myself telling them everything I know about plants we met along the trail) but they also invited us for a coffee which they brewed right there next to the first peonies we found. It was nice to be the guest of an outdoors picnic like that.

More importantly: If it wasn't for these companions,  we probably would have turned on my heels right after meeting the first few bushes. They were located at the start of this downhill trail, which was immensely slippery and my daughter was a bit hesitant to continue with the trail. Having more people around gave us more confidence. 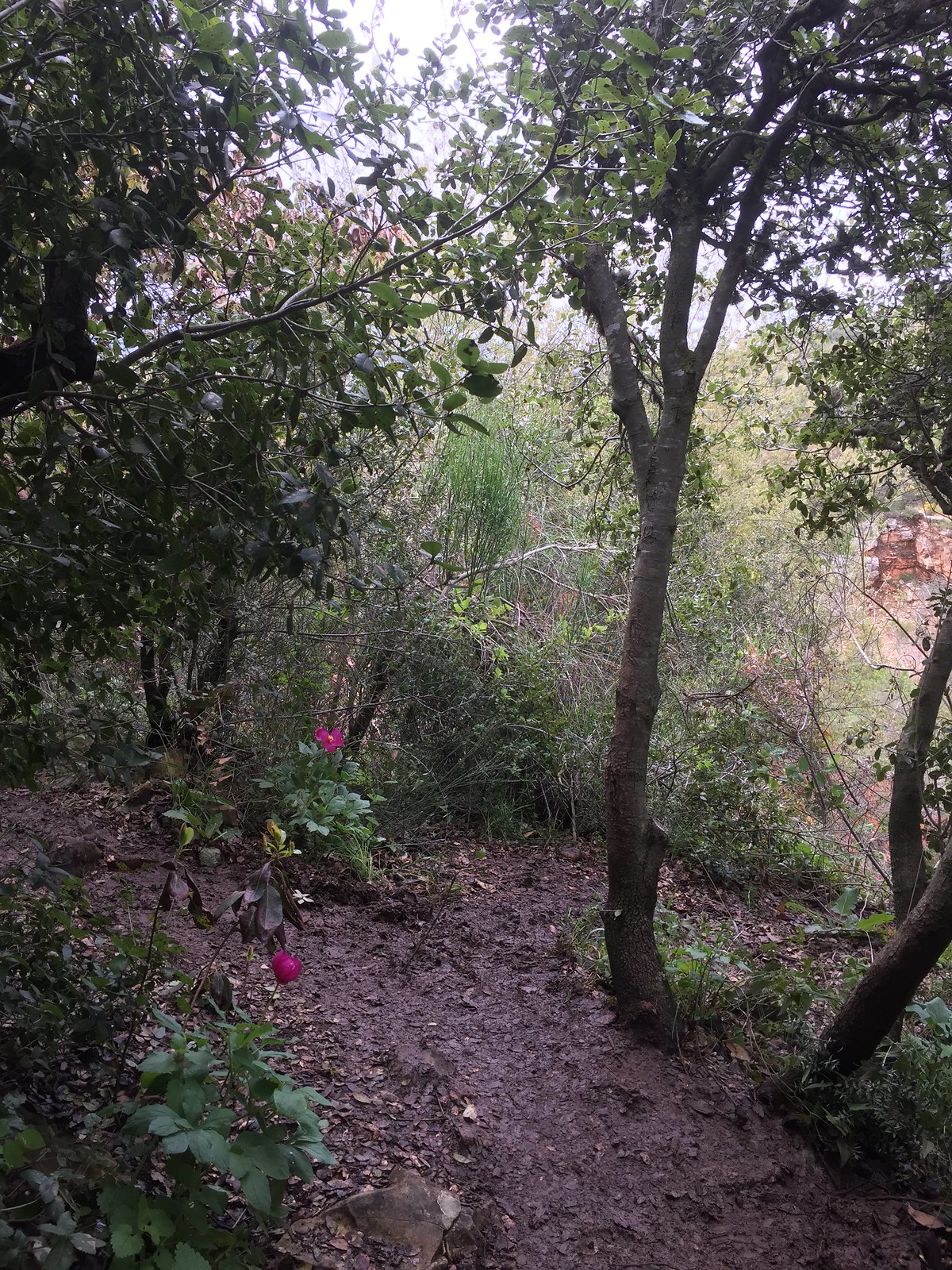 I've seen peonies countless times in gardens in British Columbia, but nothing compares to finding them like this (even though it was to be expected that I'll find them, of course). Their presence in this quiet oak and arbutus forest is nothing short of magical! 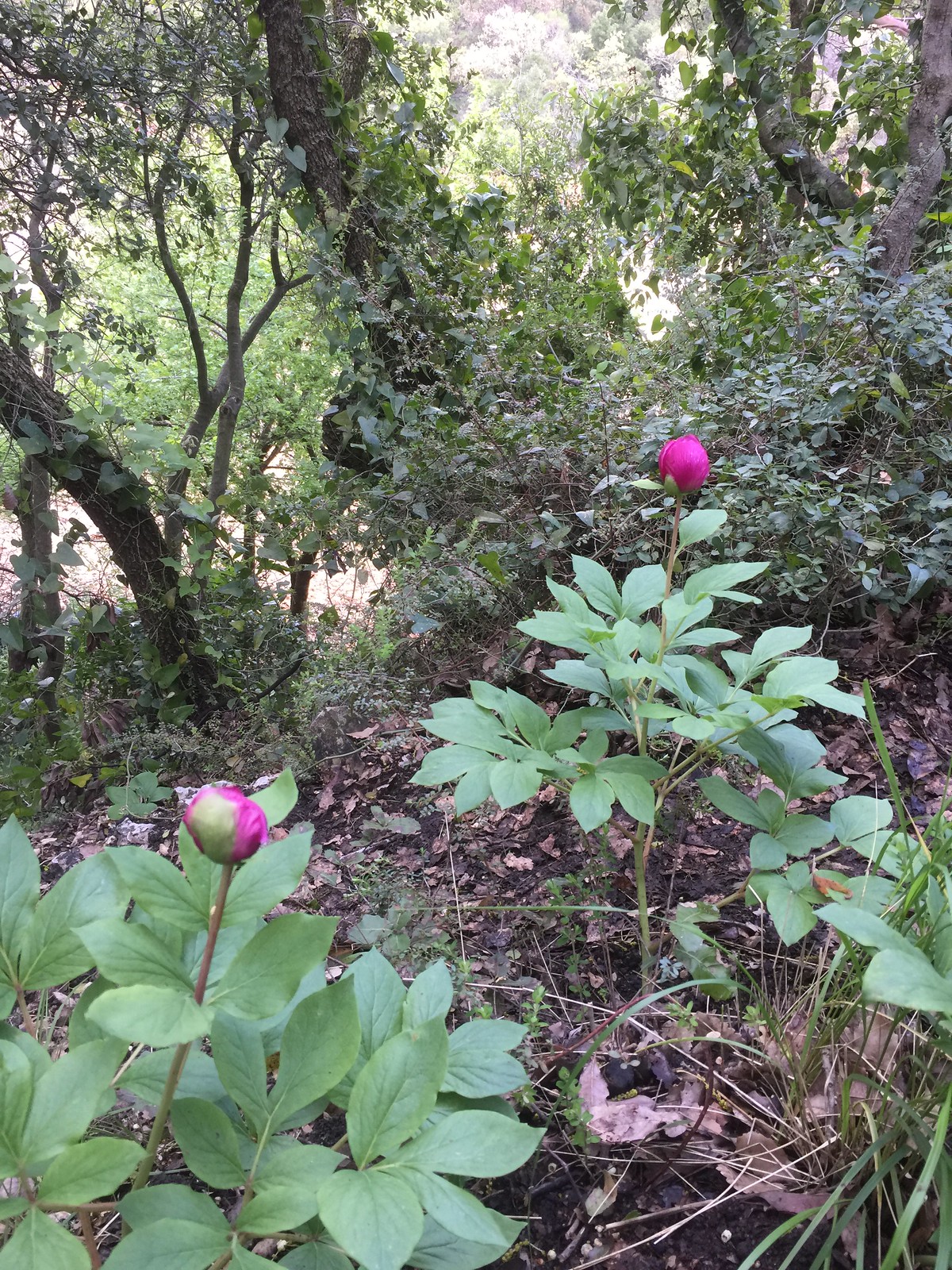 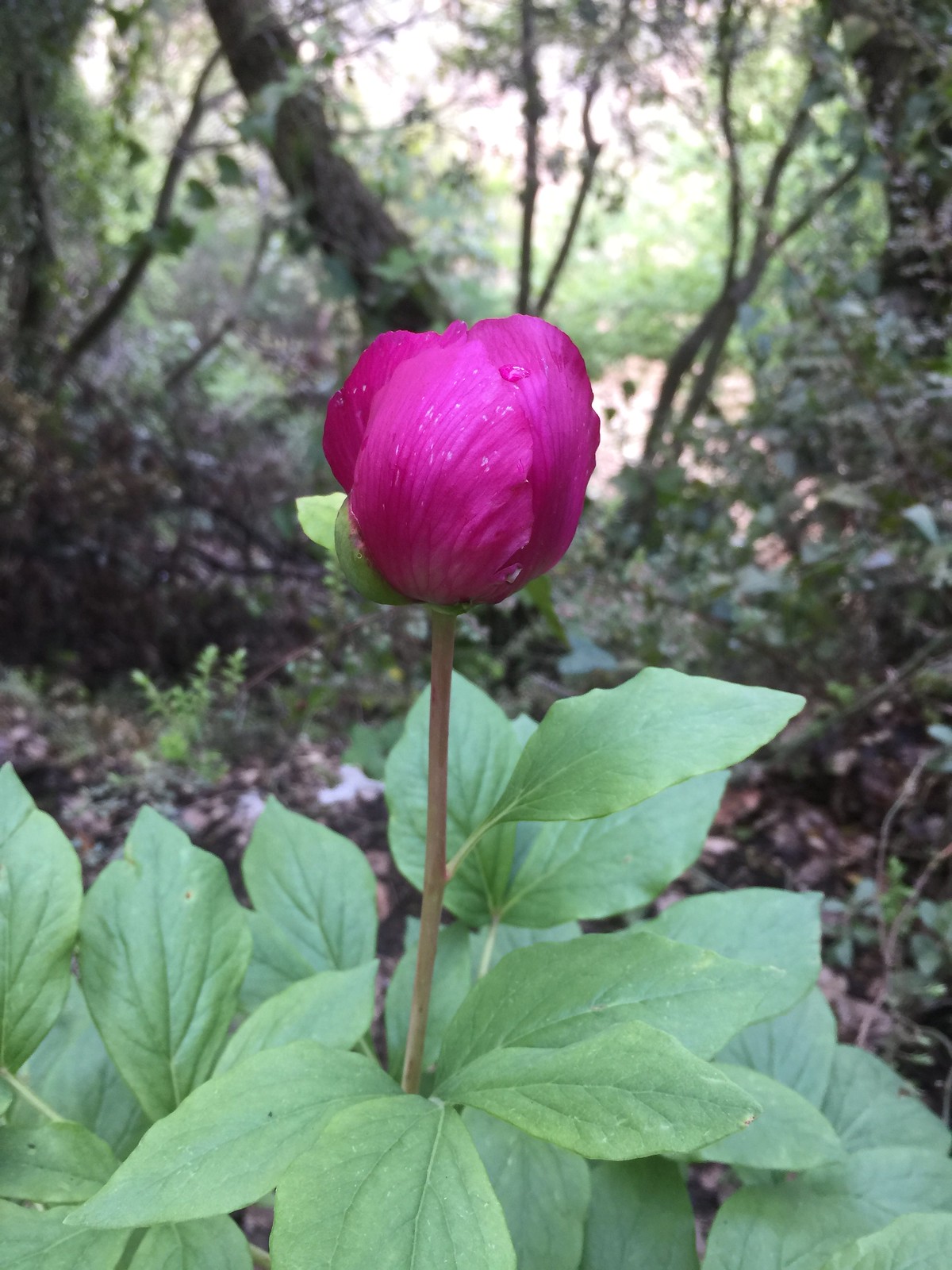 The wild peony (Hebrew: אדמונית החורש) are considered the first medicine plant by the Greek. They are named after Paeon (AKA Paean), the Greek God of Healing. And indeed their leaves and roots were used to heal a number of conditions, epically for night terrors, to treat the neural diseases, epilepsy, headaches and liver complaints, digestive issues and clearing the womb after childbirth or during mensuration. Dioscorides account in his Herbal (Materia Medica) mentions specific preparations for treating those conditions, as well as clearing the womb after childbirth, and how different parts of the plant are used:

"III. 140. Paeonia or glycyside which some name pentorobon, dactylos idaeos, the root paeonia, others aglaophotida. The stem grows two spans high and has many branches. The male has leaves like walnut, the female much divided leaves like smyrnium. At the top of the stem it produces pods like almonds, in which when opened are found many small red grains like the seeds of pomegranate and in the middle five or six purplish black ones. The root of the male is about the thickness of a finger and a span long, with an astringent taste, white, the root of the female has seven or eight swellings like acorns as in asphodel. The dried root is given to women who have not been cleansed (internally) after childbirth. It promotes menstruation (a dose containing root) the size of an almond being drunk; it lessens abdominal pains when drunk in wine. It helps those who have jaundice and kidney and bladder troubles. Soaked in wine and drunk it stops diarrhoea. Ten to twelve red grains from the fruit taken in dark rough (dry) wine slop menstrual flow and being eaten they ease stomach pains. Drunk and eaten by children they remove the beginnings of stone. The black seeds are good against nightmares, hysteria and pains of the womb when up to fifteen are drunk in mead or wine. It grows on high mountains and foothills." 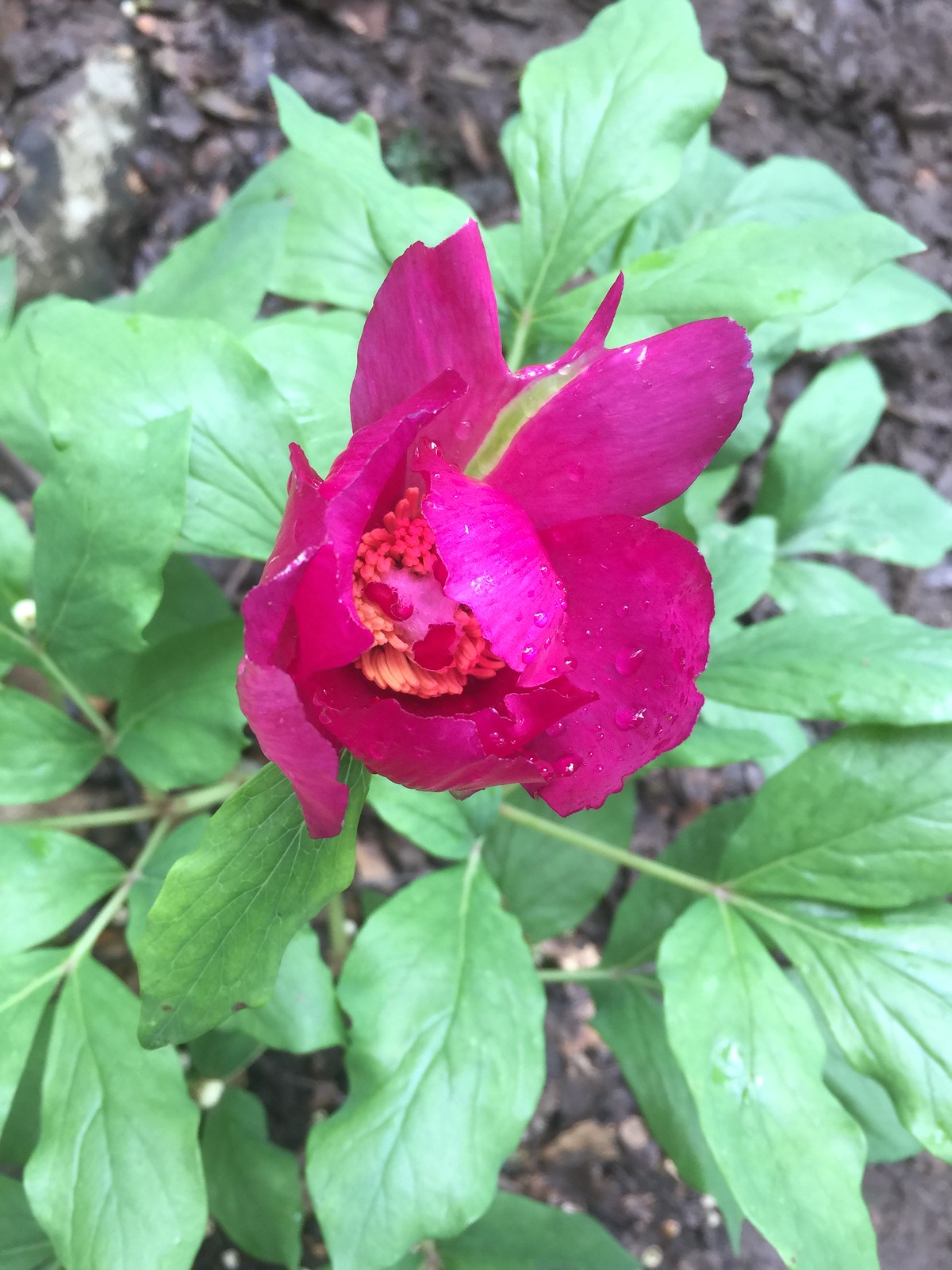 Last but not least: Their scent, of course!
Wild peonies have a robust, sweet-spicy scent that is at least ten times better than the garden variety. I find that more often than not, the multi-layers of cultivated petals reek of something green and nasty, best described as the scent of the water in the vase after flowers have been sitting in it for a week. White peonies (and some light pink ones) tend to be better smelling, with a scent spicy yet cool, peppery and green and only a tad rosy and clove or carnation like. The are sharp and their vibration resonates around the head and the nose. These were all around sweet, warm and heavenly. Inhaling their scent created a feeling similar to smelling roses, a warmth and soothing around the heart and solar plexus. And most of all, so surprising to smell this kind of scent on a mountaintop surrounded by oak and arbutus trees! 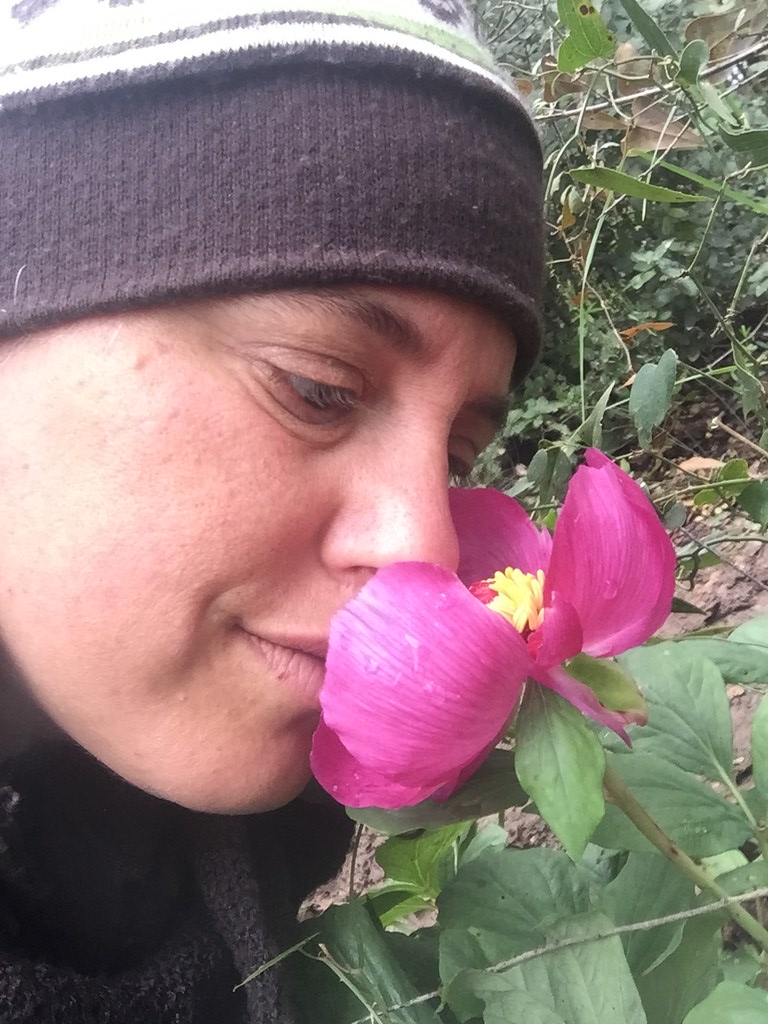