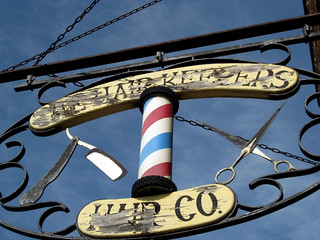 As you may have noticed, I've been on a bit of a roll with drugstore machos and barbershop fragrances. I've searched high and low for fragrances in this category - on the drugstore's shelves, in fancy department stores, and niche parfumeries. I've even went as far as attempting to grow a bit of chin hair and a stick-on moustache so that I could impress the neighbourhood's barber that I need some manly grooming.

Alas, the last trick did not work very well. When I stepped onto the checkered-floor I felt even more invisible than on Vancouver's chick-unfriendly streets. On the bright side, that allowed me to scour the shelves and get a good whiff of the very sparse merchandize available - mostly consisting of shaving creams and aftershave balms in minimalist packaging that bear old-world names. There were nothing worthy of sampling or reporting there, and after being completely ignored for 10 minutes I gave in and asked one of the barbers if they have any colognes or aftershaves I can smell. They said they sell none, but there is this one product they use on their client at the end of each shave, which they kindly let me photograph and sample.

Pinaud's Lime Sec is an acid-green liquid with a disgusting aroma that is what I would imagine they've blasted on the masses of refugees at the close of WWII, and would continue on as an insect repellent spray throughout the 50s. In other words - it smells terrible, and has very little to do with lime. Even rancid lime oil does not smell that terrible. 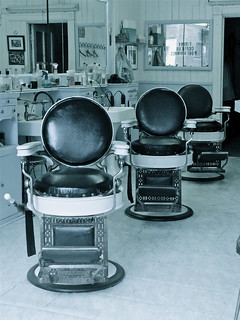 Needless to say, I stepped out of the store feeling disappointed and dismayed, and with a stark realization that you can't experience barbershops unless you're a man. So I can only imagine what it would be like to get an old-fashisoned shave with a straight razor, having your bristly whiskers  softened with a soapy cream, slapped on the face by skilled hands and then surrendering to a sharp blade sliding on your throat. The ritual, if I'm not mistaken, ends with a blindfolding act with a steaming towel, and then some more slapping - this time with a stinging alcoholic aftershave that hopefully does not reek of wartime disinfectants, but rather with one of the sexy fragrances from the list of favourites that I've complied.

While these fragrances vary greatly, they can be divided into three major categories, there is a common thread running among them, which is rather utilitarian: softening the stubble before the shave; and treating the skin to prevent post-shave rashes and infection.

BARBERSHOP FOUGÈRE
The majority of the fragrances belong to the Fougère family in this way or the other. This is not surprising if you take into consideration that lavender soothes the skin and is an excellent disinfecting treatment for nicks and cuts. Unlike so many other disinfectant essential oils - this one also has a soothing smell which would create a positive association for visiting the barber. Add to this plenty of musk and baby-powder notes, geranium and chamomile, hints of warm, sweet spices - and you get the distinctive, reference barbershop fragrance.

Canoe (Dana)
It's been a long time since I've encountered this fragrance on any of my local drugstore shelves; but if my memory serves me correctly, this is a rather sweet, ambery and floral rendition of the Fouler theme, utilizing heliotropin and eugenol in addition to a high dose of coumarin, and of course the compulsory oakmoss, lavender and linalool.

Royal Copenhagen
This one take the musk and baby powder to a new height. Like a return to the crib for the inner-baby that hides within each grown man. There is really not a better way to describe it. 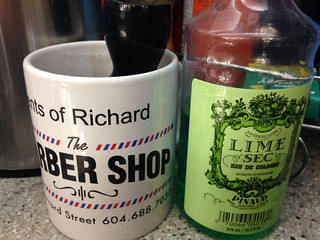 Brut
A little more aromatic than Canoe, and not nearly as musky and powdery as Royal Copenhagen, Bruth is herbaceous yet also very soft. It has a cheap bottle-green plastic packaging that makes it look like a mouthwash and off the top of my head I can think of at least 10 much better fragrances for men; but it's a classic drugstore fragrance that has initiated countless of boys into manhood. It is far better than Axe or Drakkar Noir for that matter.
If you'd like to opt for a more fancy, prestigious fragrance in this category, may I recommend Caron's Pour Un Homme. With its lavender and powdery animalic notes of civet and musk give it a very soft, diffusive, powdery and luxurious personality, that reeks of old-world refinement and gentlemanliness. The kind of scent you'd want to sprinkle your handkerchief with. Other options along these lines are Pour Monsieur (Chanel) and Mouchoir de Monsiuer (Guerlain). 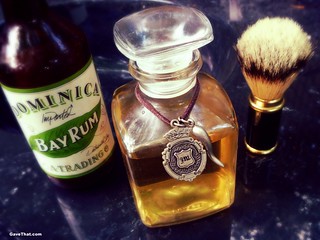 BAY RUM
The Bay Rum aftershave is a mainstay staple in men's grooming and is as old as imperialism itself. In the tropics, the disinfecting qualities of Europe's Aqua Mirabillis had to make do with the local antiseptics. We're talking about hard-core eugenol territory - West Indian Bay Leaf (Pimento remecosa), Bayberry (Myrica rub), allspice, cinnamon, cassia and of course clove buds - were steeped in a highly distilled cane sugar liquor (rum) to create a skin-burning (to say that it stings is an understatement) to help reduce the negative side effects of shaving. Bay Rum is not unlike spiced rum, so I suspect it was also consumed by sailors either before or after the shave. Because, er - why not?

There are many low-cost bay rum aftershaves in the market, and you can easily make your own if only you can get a hold of West Indian bay leaves (they are different than the Mediterranean bay laurels - Laurus nobilis).
Old Spice is a case in point, in which the bay rum theme was elevated to another level, and the romanticism of sea navigation has been well-marketed, and thankfully also well crafted. The spices are softened with geranium, vanilla, coumarin, have a distinctive carnation-like character that makes them feel more fancy and dandy-like; and the citrus add a lovely lift to the composition.

Paco Rabanne takes the medicinal qualities of spices to a whole new level by adding medicinal salicylic notes and camphor. Yet there is something very charming and manly about it nevertheless. At least as an aftershave. The balm would leave your man's cheeks glossy and smooth.

Continuing on the spice route, we have also some more sophisticated fragrances, that come in all kinds of grooming products such as Tabac Original - a delectable spicy vetiver with a heap of freshly microplanes nutmeg, woodsy-elegant allspice and clean musk dry down. And if you're after something more sophisticated (and pricy) - Equipage delivers a similar theme albeit a tad more leathery, tannin, dry and even floral with its heart of carnation. 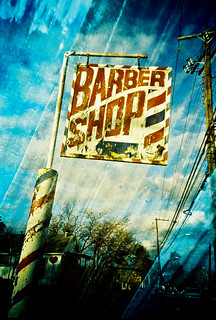 EAU DE COLOGNE
Disinfectant qualities are not limited to spices or herbs, but also are shared with citrus oils. In addition, they have skin-softening qualities, which make them perfect for shampooing hair and softening those stubborn whiskers. I'm quite confident they're used for that purpose in many shaving creams and soaps. And in any case, a splash of old-fashioned eau de cologne type fragrance will sure create a pick-me-up effect after sitting in the chair for a while and being pampered.

4711 is what I'd imagine a barbershop in Europe to smell like. At least in Germany, where it is one of the most iconic and most favourable smells. My grandmother (a Berlin native) remembers her own grandmother and mother wearing it. And judsing by the large sized bottles of 800 mL and even a full litre - this Aqua Mirabillis is used in a  rather utilitarian way to this day.

English Leather has a bit of a misleading name. It smells more like a soapy eau de cologne with tobacco base notes than anything else. That's due to plenty of linalyl acetate (the primary ingredient in petitgrain and also in lavender). In any case, it's affordable and rather chic although I have a suspicion they've significantly tampered with the formula.

Pino Silvestre, a pine-and-moss themed coniferous cologne that used to have a fantastic natural glow about it but was sadly reformulated without the oaks. With a price point that is still as low as ever, a bottle that look like a green pine-cone still and a box that provides enough amusing material for a bathroom read - perhaps all can be forgiven. Or maybe not...

For those wanting to spend a little more mulah and achieve a fancier citrusy, classically gentlemanly barbershop effect, consider splurging in a bottle of Azzaro - a slightly anisic lavender Fougère with a distinctive juicy-citrus and herbaceous combination of basil and tarragon. That is what I'd imagine gentlemen in Italia to splash on their face before going out on the town. And then of course there is the even juicier, refined and beloved Eau Sauvage the epitome of masculine fragrances, barbershop or otherwise.