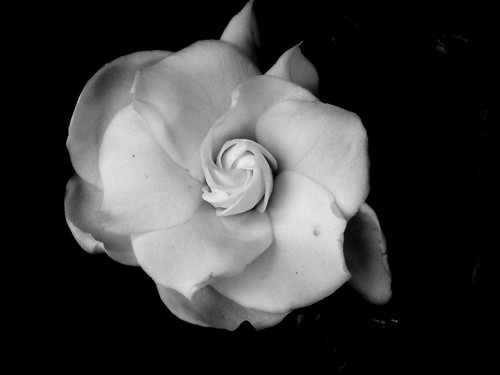 Chanel's Gardénia was never really meant to be a realistic gardenia, but an olfactory representation of the designer's favourite flower, the (scentless) white camellia. Like Narcisse Noir, this abstract floral has an orange-blossom-like quality at its core, but it's not nearly as dark. At the same time, it does not have the bright clarity orange blossom usually creates. Instead, it plays up the methyl anthranilate, and fleshes it out with a muted, slightly mushroomy-green tuberose back note, waxy aldehydes and powdery violet-rose accord that bring to mind lipstick, scented candles and makeup. As it dries down, it becomes less sweet and smooth and a little dusty-woody, like cedar wood saw dust. Perhaps there is also a hint of cedar moss as a fixative as well, some vanilla and musk. All around there is an incense feel in the air that accompanies the abstract floral frontline. But all in all, it is quite linear and very well blended that the character somehow maintains itself despite these changes.

If you're expecting a luscious, larger-than-life tuberose-gardenia you'll be disappointed. This is demure by comparison, and has more fruity floral character than a big white floral as this name would suggest to anyone familiar with the flower. It's very well-behaved, staying close to the skin but at the same time has depth and a harmonious, even if not complex evolution. This is the perfume extrait I am referring to, which I believe was discontinued when the Les Exclusifs were launched. Which is too bad, because it was replaced by a thin and pale shadow of its former self, and a very short lived experience. And I hear that even this older version I have may very likely not be the original composed by Ernest Beaux. Read more on Perfume Shrine about how Gardénia has changed and evolved (or devolved...) in different eras since it launched in 1924. To me it smells more like a Caron than a Chanel - it has warmth and sensuality, while most of the Chanels are generally aloof and have a cool manner about them.

Nevertheless, it will still satisfy elegant ladies in beige linen suits or cream satin gowns, or those who enjoy an unusual floral with a retro yet not old-fashioned feel. It is elegant, understated and the aldehydes are not terribly dominant (as they are in No. 22, for example). The new version that replaces it is louder at first, with a more identifiable fresh flowers of tuberose-gardenia with their intense headiness and almost realistically dewy gardenia petals, but just for a few minutes. It is so light and sheer that it disappears very quickly and makes room for an accord that is quite true to the core of the original composition - incense, wax, lipstick rose-violets - just a tasting menu of it all, not a full fledged Gardénia. 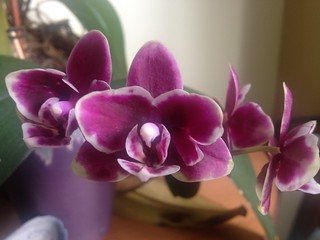 For many years, I've been trying to coax my orchids to do a rerun of their showy display of flowers. Instead, these freeloaders sit in their optimal orchid-growing corner and demand their bi-weekly attention of watering and nutrients, prayers and begging and show nothing in return aside from not letting their green leaves die (at best).

If like me you've experienced the frustration of an orchid lover's failures, that should be enough of a background story to explain my utter surprise and delight when in early December of last year, one of the orchids revealed a little stem of green buds... Two months later, and the buds have grown into blooms which are still as beautiful and seductive as ever.

This is such a memorable event that I've been not only secretly allude prophetic meaning to it (something good is going to happen soon, if it's not happening already...); but also tempted to create a new perfume inspired by it...

Sambac jasmine is one of my favourite notes among all flowers and especially white florals. It is exotic and reminds me of fragrant green tea and gardenia (both of which I adore). In previous perfumes creations I've used it either to create a gardenia effect (GiGi, Charisma, Fete d'Hiver), or as a supporting note to jasmine grandiflorum (as in Yasmin and Moon Breath). Tamya and Fetish are the only two perfumes I've created in which it plays a star role - in both I've harnessed the intoxicating sweetness of its high methyl anthranilate content to create a fruity if not almost gourmand fragrance.

In this orchid-inspired perfume, sambac jasmine is the star of the show. I've paired it with cardamom before in GiGi but here this effect is magnified and exaggerated. I was reminded of how much I enjoy this unusual combination when I was running the solid perfume workshop with my Floriental Week students. The following week I ventured into my lab and was looking for different ways to treat jasmine sambac that I have not thought about before. I played with pairing it with cool, medicinal top notes and also incorporate a material that is new to me: mandarin petitgrain. This is a petitgrain that is very rich in methyl anthranilate (also present in the sambac), but also has a cold soil and leafy qualities. To add to my challenge, I've tried to stay away from ambery notes, even though I love them and know they work with sambac jasmine. The amber base is a natural tendency of mine and sometimes I just need to try something new. In this case, I focused on musk and woods.

I've been wearing this orchid-inspired perfume for over a week now and I'm surprisingly pleased with the result... But as always, when things go smoothly on the composition front, a name for the perfume escapes me (or the one I think about turns out to have a certain connotation that I prefer to avoid).