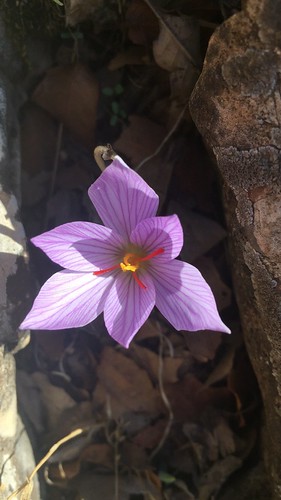 Finding this saffron crocus (Crocus sativus) on Mout Meron was such a delightful surprise!
I'm thrilled to report that the aroma, though unmistakable saffrony, is elusive and different. There is something about the fresh flower that doesn't translate into the dead or dried one. The breath of fresh mountain air that surrounds it. A hint of moss from a nearby oak branch. Maybe even a tiny bit of cinnamon. But most importantly - a generally flowery feeling that you don't get when encountering the spice.

The three orange columns you see at the centre of the flowers are not the stamens (which are the male flower bits that carry the pollen), but the feminine stigma, which in the saffron crocus, unlike many other dual-gender flowers, is located above the stamens, making it a more difficult flower to pollinate.

I've returned to the studio feeling inspired to create a very floral saffron fragrance. Perhaps incorporate it into my existing Tamya perfume, and then work out the autumn crocus theme by adding a hint of saffron. It would be interesting to try to "spice up" this otherwise innocent, fruity-floral fragrance. It's a very uplifting fragrance, and may be exactly the kind of floral surrounding this dusky crocus needs.
Back to the top