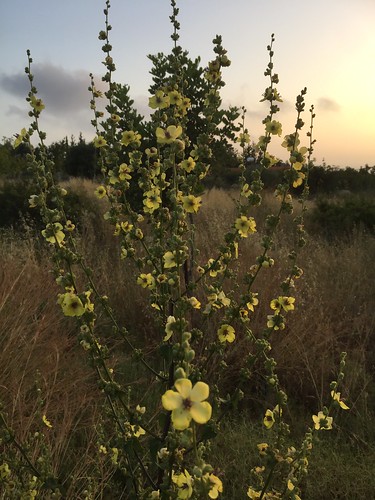 Wavyleaf Mullein (Verbascum sinuatum), in Hebrew בוצין מפורץ (Butsin Meforatz) popped up in my yard in unusually high numbers and after two years of growing. It is not surprising because it favours disturbed soils, but at the same time - it chose to grow right outside my window, and I read it as a sign and a calling for me to study it, interact with it, and find its medicine.

It is now reaching its culmination with beautiful, tall candelabra-shaped inflorescence, lit with florescent-yellow candles scattered at different places each day. The plant at this stage is very impressive, and will bloom for a long period of the summer when many other plants don't bother trying to procreate, or are already dead and dry as a bone. Therefore, it provides important food source for various insects during the hostile summer months.

The flowers' intense colour and innate light, as well as the candelabra shape of the inflorescence are said to be the inspiration for the design of the Menorah, holder of the eternal light at the tabernacle and the temple in Jerusalem. But this is not the only connection this plant has to light: when it completes it cycle of life and the leaves are dry, their fuzzy hairs provide an excellent fire starter and could be rolled into the shape of a candle or used as a wick (dipped in fat or oil, of course). In fact, its Hebrew name comes from the Aramiac word for candle. The same word also was used to relate to the soul, or Neshama. Additionally, the foam-like core of the stem and branches can create fire without matches, using friction, and then keeps the fire in a slow, smouldering manner, allowing an easier keeping and transferring of fire. These can also be handy skills to have if you were to ever get stuck in the wilderness with no candles or matches. 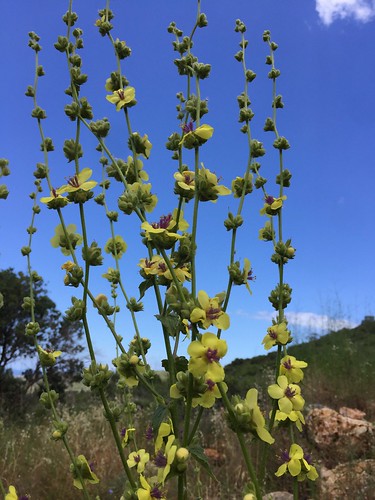 Waking up early every morning and seeing these flowers literally light my window at dawn was uplifting and magical, and felt like a message of encouragement despite the heavy heat that already started hitting us here around the Mediterranean. If SAD in the cold countries happens in the winter, in the hot-hot-hot ones it is the summertime when people have the hardest time, and it is not uncommon for people to be prone for depression during this time, even if simply because of the debilitating heat that makes one stupid for the majority of our waking hours. So I can relate to the interpretation of its signature being about standing tall and breathing deeply.

When the flower gets even slightly damaged (for example: if you brushed by it lightly), they will fall off the plant within a few seconds. This mechanism seems like a lesson of letting go, and feels almost magical to me. As is the stark contrast of the deep-purple stamens against the fluorescent yellow of the petals, like the complementary coloured robes of the healing archangel Raphael. It makes sense that the flower essence is used to clear and balance the psyche. But even without getting damaged, these flowers last less than a day before they wilt and fall off: the open around sunset, and begin to wilt and deteriorate  shortly after high noon. 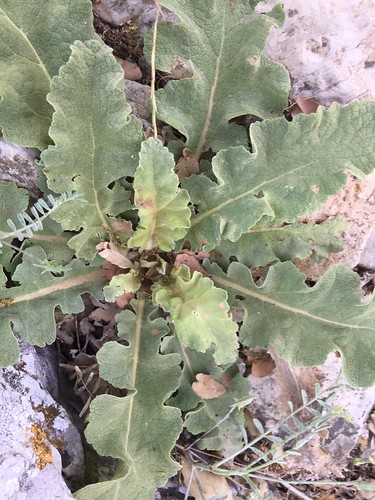 Mullein is a bi-annual plant, growing a rosette of leathery-leaves, covered in tiny hairs. The circumference of which can be extremely large. According to the doctrine of signatures, the tiny hairs are a signature fo the lungs' cilium. And indeed, the plant has several medicinal uses to do with the bronchiole. The leaves can be rolled and then smoked like a cigar, but have medicinal properties that in fact reverse the adverse impact of tobacco-smoking. The leaves can be prepared into a strong tea or a tincture as well, and act as an expectorant to clear out the lungs from mucus and help expel a dry cough. The leaves in the Israeli varieties I met are very rough, but the European kind

Verbascum thapsus (which also spread to North America) has softer leaves which are also used instead of toilet paper, as well as for dressing wounds. 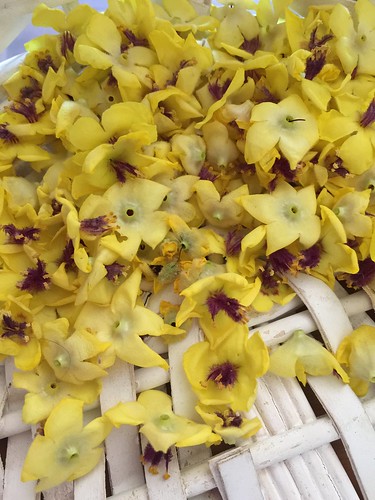 The tinctured flowers are useful for treating various respiratory ailments as well, including asthma. When infused in oil, they are used as a medicine for earaches that can be used on very small children as well.  And this is one of the things I've prepared from them early this season, having my young nieces and nephews in mind, who unfortunately one or another among them tends to suffer from ear ache almost every year. 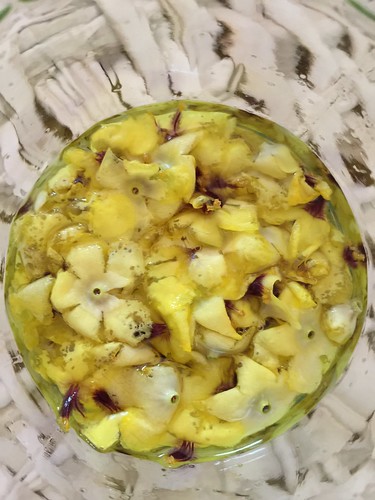 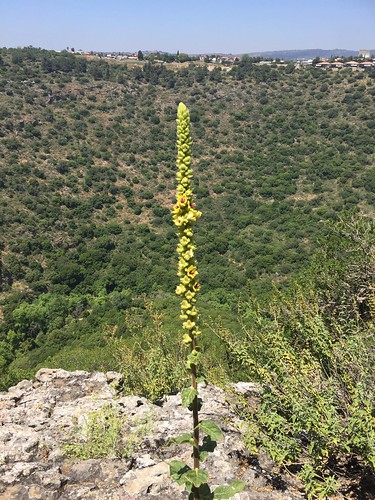 Last but not least: Here is a photo of the impressive and beautiful Caesarian Mullein בוצין קיסריון (Verbascum caesareum), overlooking the cliffs of Kziv creek - one of the most gorgeous nature reserves in Israel. This is a rare plant that is endemic to Syria and grows only on the cliffs and slopes of the northern-most regions of Israel. Israel is a very special place as it contains many different climate zones and diverse habitats. Out of the 120 species of mullein (not including 8 additional recognized hybrids), 16 were identified in Israel, and most of them are extremely rare. It is also a very clear message of "standing tall and speaking our truth".

Do you know more about mullein? I would love to learn more about this plant, albeit it having very little to offer in the way of aroma. Also, which kind grows where you live?

Do you know more about mullein? I would love to learn more about this plant, albeit it having very little to offer in the way of aroma. Also, which kind grows where you live?
Back to the top