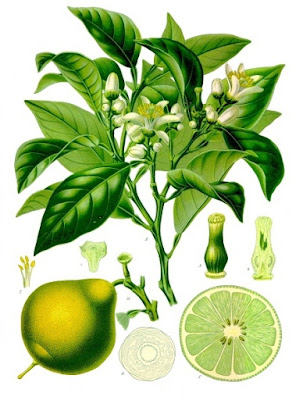 Bergamot (Citrus bergamia) is one of the most important perfume materials, being a key component in almost all fragrance categories. Bergamot is more floral than any other raw material that comes from a citrus rind, and goes with anything and everything: You’ll find it in Citrus and Colognes (naturally) Florals, Florientals, Orientals, Fougère including Marine/Oceanic, and of course Chypre, where it is a key component including even the Chypre Leathery/Tobacco fragrances. Bergamot is diffusive, elegant, balanced and quite complex - a trait that is rarely found in the fleeting top notes.
Please note that the “t” is pronounced at the end - bergamot is not French, but an Italian word, not French. And even the French, who like to eliminate the last sounds of letters with an invisible linguistic guillotine pronounce this name as “ber-ga-mott”.
In the 18th Century, little papier-maché boxes called “Bergamotes” were made in Grasse. They were scented with pieces of bergamot peel, a custom that lasted only till about 1830. In Spain, bergamot peels are still used to make tabachieres (snuff boxes). In the process of making them, the peels are flipped inside out, so that the tobacco kept inside the box becomes flavoured with the cured bergamot’s aroma. 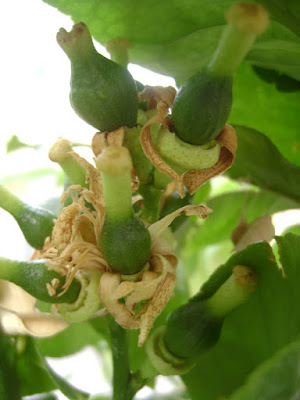 Begramot essential oil is also important in flavour - especially to make Earl Grey tea, one of the most popular aromatized black tea blends (typically orange pekoe), sometimes with the addition of lavender, and even vanilla (in Cream Earl Grey). I wonder if this custom is related to keeping tea leaves inside similar orange boxes. In any case, such an experiment would be worth trying, and this practice is not foreign to the world of tea: There is a special type of Chinese white tea that is kept inside tiny dried mandarin orange “boxes” that were hollowed out of their pulp.
Bergamot is not your usual citrus note. It is more floral, complex and warm than most citrus, not quite as tangy or fruity, and can be described as spicy-warm in comparison other typical citrus notes. Bergamot has a dry, floral, peppery, a little woody, more floral/lavender like than the rest of the citrus oils. There is also a green aspect to it, which is soft rather than sharp, and with hints of herbal and balsamic undertones, and tea-like qualities, which are not unlike Clary sage.
Around 300 molecules have been identified in this complex citrus oil! 30-60% Linalyl aceatate (30-60%), linalool (11-22%), Citral, alcohols, sesqueterpenes, alkanes, furanocoumarin (bergapten at 0.30-0.39%) the latter being the constituent that gives it its most distinct characteristic, and also creates the phototoxic risk.
Bergamot is most frequently associated with tea, not just because it is used to flavour Earl Grey tea (an aromatized black tea infused with bergamot essential oil, and sometimes also lavender) — but also because of the high linalyl acetate content, which has a clear, elegant, floral-green tea-like quality (this molecule is also found in large amounts in lavender, petitgrain bigarade and clary sage oils).
While bergamot shares some similarities with lemon, the latter is more acidic and fresh; and also even though both are top notes — bergamot is longer lasting than lemon, which evaporates rapidly. Bergamot develops into a bitter orange scent after an hour or so. The citrus aroma of lemon-orange (from limonene) does not reveal itself until the dry down (about 30 minutes or more after dipping the scent strip). Bergamot is softer, closer to neroli and petitgrain, and with an elegant, dry floralcy that is reminiscent of grapefruit as well (yet without the sulphurous qualities). 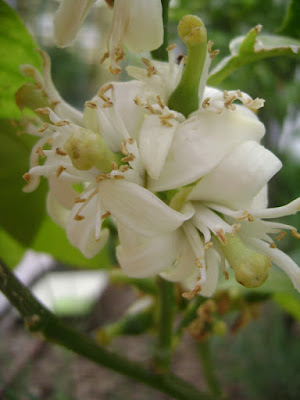 Bergamot is one of the most sought-after citrus oil. It’s versatility and sparkle is invaluable. It is used in citrus eaux as well as a top note for floral, woody and oriental compositions. But perhaps its most intriguing role is in the original formulas of Chypre – where it was used to contrast the mossy, earthy-sweet notes of oakmoss and labdanum to create the many seamless compositions that this fragrance family includes. It is also a key component in the ambreine accord, where it is juxtaposed against vanilla, vanillin or ethyl vanillin.
Bergamot blends well with almost all oils. Its citrusy and floral aroma makes it a very versatile note. It blends particularly well with: Black Pepper, Rose, Jasmine, Neroli, Orange Blossom Absolute, Orange Flower Water Absolute, Vanilla, Benzoin, Lavender, Juniper, Oakmoss, Labdanum.
Caution: Please note that bergamot is highly phototoxic! If you are using this oil for skincare or body care (leave-on products such as body oil, massage oil, creams, lotions, etc.) please opt for bergapten free oils, labeled as “FCF” (which stands for “furano-coumarin-free”). However, the FCF oil loses a lot of the character, and is best avoided for fine perfumery. It really does not do bergamot any justice… Because bergamot is so common in so many fragrance categories, it would be best advised to never wear perfume of any kind on areas that will be exposed to the sun or tanning lights. Perfume should be worn on pulse-points that don't typically see the day of lights - behind the ears, on the wrists. Think twice if you apply perfume to any other area (i.e.: bend of the elbows and knees, on the chest, etc.) and hit the beach or the pool. You may get a burn if you do so. So either cover up those areas or avoid wearing fragrance before getting out sunbathing.
Examples for perfumes with dominant bergamot note: Shalimar, Chypre, Mitsouko, Charisma, Espionage, Moon Breath, ArbitRary, Fetish and more.
Back to the top