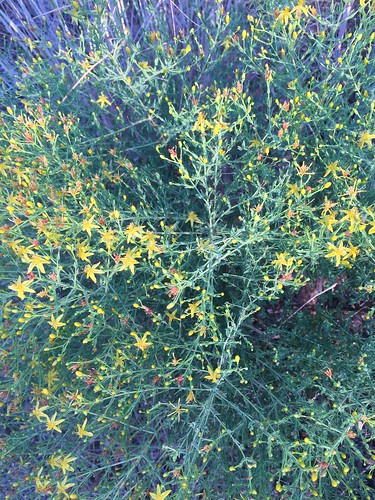 For most of the year, Hypericum looks like a dried-up, reddish-brown and brittle bundle of shrivelled tendrils that resemble a fragile nervous system. It will remain dead-looking for many months, the only hint for its liveliness are the round fruit from which the next generation will come. Suddenly it comes to life in late spring and early summer, first with tiny leaves, elegantly and tightly organized alongside all sides of its branches; then tiny golden buds, and by the time the Summer Solstice rolls in, the yellow flowers have already began to open.

A look from above on these tiny bushes reveals a cross-like pattern (as pictured above), which is what inspired the crusaders to relate it to Christianity. St. John the Baptist was Jesus cousin, and six months older than him. Therefore, it is befitting to relate this healing plant that blooms six months prior to Christmas (Jesus' birthday, which occurs shortly after the Winter Solstice), specifically to St. John, who was also a healer.

The plant pictured above and which is in bloom at the moment is Hypericum triquetrifolium, native to Israel; while the species commonly used in herbal medicine is Hypericum perforatum, and is considered the most potent medicinally. The small yellow flowers of both plants present with the unique signature of turning the oil they're steeped into a blood-red liquid. This alone makes it a signature for healing wounds. Additionally, the H. perforatum also appears to be punctured with tiny holes in its leaves, as if it was pricked by a thousand needles.  These tiny dots are in fact clear, see-through glands that cover the leaves of this species, and through which the light can pass making them appear like holes. The holey appearance again relates it to punctures and wounds; but more importantly makes it a protective plants against evil spells such as those practiced in Voodoo; as well as more metaphorically speaking against punctures in one's psyche, phantasms, etc. As does the cross-like pattern of its branches. Not only in Christianity, but also magically in other cultures and traditions, the cross is considered a protective and sacred shape. In fact the name for Hypericum comes from Greek and means "Above the Icon", which alludes to this use of this special plant from time immemorial.

The magic of hypericum does not stop there. It is also known for being strongly connected to the fairy realm, a realm of invisible beings that have a history of revealing plant medicine to the Herbalists, Wise Women and Shamans. Those who go searching for it need to be extra cautious about getting lost in their foraging expeditions, especially of this plant, in order to not get lost. There are species of Hypericum that are native to North America, but they are not considered medicinally effective. The European plant (H. perforatum), which immigrated along with the European invaders of North America, has become naturalized and recognized by the First Nation healers as well. It is also told that the European "Little People" told the First Nations "Little People" about the healing properties of Hypericum, and that is how the First Nations learned about it. 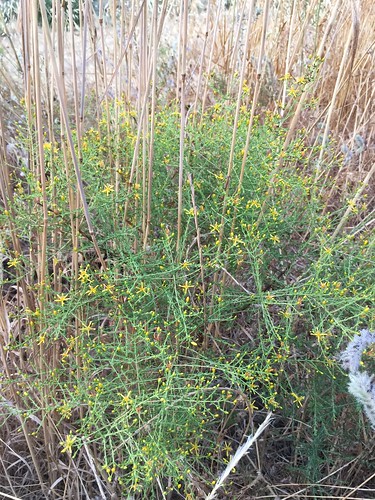 A few curious facts about hypericum: it favours disturbed soils such as abandoned fields and cows' pastures, and is considered an invasive species in North America. Farmers consider it to be a real pest, especially because there is a serious health hazard to livestock from over-consumption of the plant: they will develop phototoxicity and get burns from the sun as a result. This is especially prevalent among livestock with white or other lightly coloured coats. For humans there is no such danger, especially because even when taken as medicine the dose is way too low for any phytotoxicity to develop.

To summarize the uses of hypericum: In herbal medicine, the whole plant may be brewed as tea or prepared into a tincture, which is considered to be the most effective way to receive the maximum benefit of the plant. Additionally, the fresh flowers are used to prepare an oil infusion. The oil infusion can be used as is or further processed into a balm (simply prepared by adding melted beeswax to the oil infusion), in order to treat skin conditions such as cuts, wounds as well as eczema, atopic dermatitis, and for pain relief (especially joint pain, rheumatism, etc). The tincture, decoction and tea can be used to treat depression and nerve pain, solar-plexus pain as well as digestive issues such as indigestion, inflammation of the digestive tract, heartburn, etc.

As a wound healer it also has a reputation of preventing inflammation and infection in wounds, including tetanus. There are even case studies of it curing tetanus that has already set in!
"Hypericum has been used in homeopathy and herbalism externally as a soothing anti-inflammatory for fresh, bleeding wounds, sores, burns (in all degrees), bed-sores, chaps, folliculitis, abrasions and injuries from work or cleaning agents, bumps, boils, furuncles, dry and wet eczemas and insect-stings. It is also useful as a cosmetic skin-care cream fro scaly, dry or unclean skin and very effective as a massage oil for muscle spasm (remember the tetanus), cramps, stiffness, ache, overuse, sprains, bruises, articular ache and back ache, rheumatism, gout, sciatica, neuralgia and poor circulation to the extremities. The oil can also be massaged into the gums for inflammation and atrophy".  (Matthew Wood, "The Book of Herbal Wisdom", 1997, pp. 312-313)

Although mild in aroma (once steeped in oil it develops a subtle scent reminiscent of helicrysum) and inconspicuous in appearance, it is a potent medicine! Be sure to use this with medical supervision, especially if taking other antidepressant and anti-anxiety medications. As overdosing may occur from the interaction of conventional psychiatric drugs and this particular plant, and could cause what is called Serotonin Syndrom.

Hypericum in homeopathy (an extremely diluted remedy) is mostly known for its use for pain caused by nerve damage, and can be found in many health food stores that sell homeopathic remedies, as well home remedy kits - which is fine to use for treating an acute condition such as nerve pain.  But it has many other holistic influences, so it is always best to use these remedies with the guidance and supervision of a trained homeopathy practitioner who will know exactly how to adjust your remedy and dosage.
Back to the top